Our government can’t force us to take the COVID-19 vaccine, but our morals should compel us to 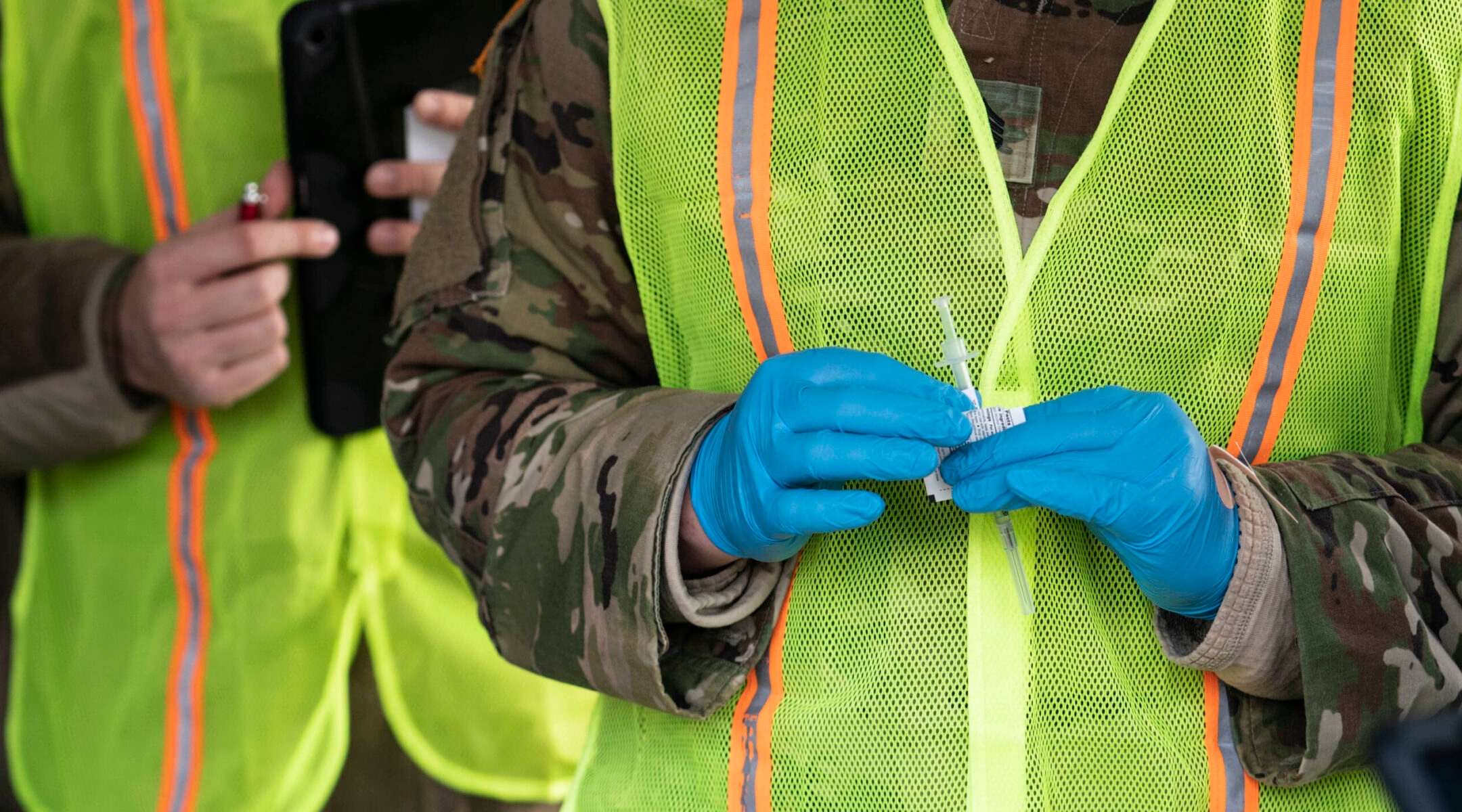 Members of the National Guard prepare to inject the coronavirus vaccine at a mass vaccination site in the parking lot of Six Flags in Bowie, Md., Feb. 6, 2021.(Sarah Silbiger/Getty Images)
Advertisement

(JTA) — A poll released last week by Monmouth University showed that 24% of Americans likely will never get the COVID-19 vaccine if they can avoid it. One hopes that as people have more information and know others who have been vaccinated without ill effects, they will change their minds.

Education and encouragement are the most reliable tools we have in our increasingly libertarian democracy — our government will barely ask us to wear masks, let alone require us to subject ourselves to a jab in the arm. In the absence of a government mandate, we would do well to consider our moral obligations.

The Torah insists that we take an active role in the rescue of those in danger. “Lo taamod al dam re’ekhah” (Leviticus 19:16) — Do not stand by the blood of your fellow — means that should a passerby spot someone in trouble, they are obligated to try and help them. Passivity in the face of danger is not an option. Intervening will always entail some degree of risk, but that doesn’t lessen the obligation to act.

Many countries in Europe and Latin America insist on a similar duty to rescue. In Quebec’s Charter of Human Rights and Freedoms, the obligation is explicit: “Every human being whose life is in peril has a right to assistance. Every person must come to the aid of anyone whose life is in peril, either personally or calling for aid, by giving him the necessary and immediate physical assistance …”

In the United States, however, there generally is no such duty. Even if a state has a Good Samaritan law, the edict typically serves as an incentive rather than an obligation. By protecting a bystander who intervenes from potential legal action, the law encourages intervention in cases where a person’s life may be in danger. But the failure to intervene is by no means criminal.

We Americans have been conditioned to think of our own liberties and well-being. We have a patient’s bill of rights at the doctor’s office and a passenger’s bill of rights in the car that takes us there. Ours is a world of entitlement rather than a world of duty. The notion of an obligation to proactively come to the aid of our fellow citizens sounds like a foreign concept.

Whether and to what extent individuals might refuse treatments that preserve or protect their own wellness might be open to some debate. And while the law might not require intervention, there is simply no moral justification for neglecting the affirmative obligation each of us has to proactively help others when they face mortal danger.

The threat of coronavirus is real, it’s imminent and millions of people are now standing directly in harm’s way. When lives are on the line, the Torah’s ethics do not countenance nonfeasance. Refusing to receive the vaccine is tantamount to standing idly by while another person is being assaulted. If achieving herd immunity will save lives – and there is no doubt that it will – then each of us has a responsibility to help our nation achieve that goal. To shirk that responsibility is to fall woefully short of what the Torah expects of us.

But what of the unknowns? What of the risks? None of us can lay claim to prophecy. But we can lay claim to scientific data. Among the vaccines now being distributed in the United States, tens of millions of doses have been administered. The number of adverse reactions is so infinitesimally small that speaking of risk with respect to the vaccine is a misnomer. On questions of science, we rely on our medical experts — and those experts have spoken with one voice.

Our state won’t compel us to get the vaccine. But our conscience should. Living in a civilized society isn’t a free lunch. Every once in a while it comes with a moral obligation. We walk around with the expectation that were we in trouble, someone would come to our aid. With trouble looming for others, let’s hold up our end of the bargain and come to theirs.

Rabbi Yosie Levine
holds a doctorate in Early Modern Jewish History from Yeshiva University and is the seventh rabbi of The Jewish Center on Manhattan’s Upper West Side.
The views and opinions expressed in this article are those of the author and do not necessarily reflect the views of JTA or its parent company, 70 Faces Media.