Karen Lewis, Jewish union chief who made Chicago’s teachers into a national force, is dead at 67 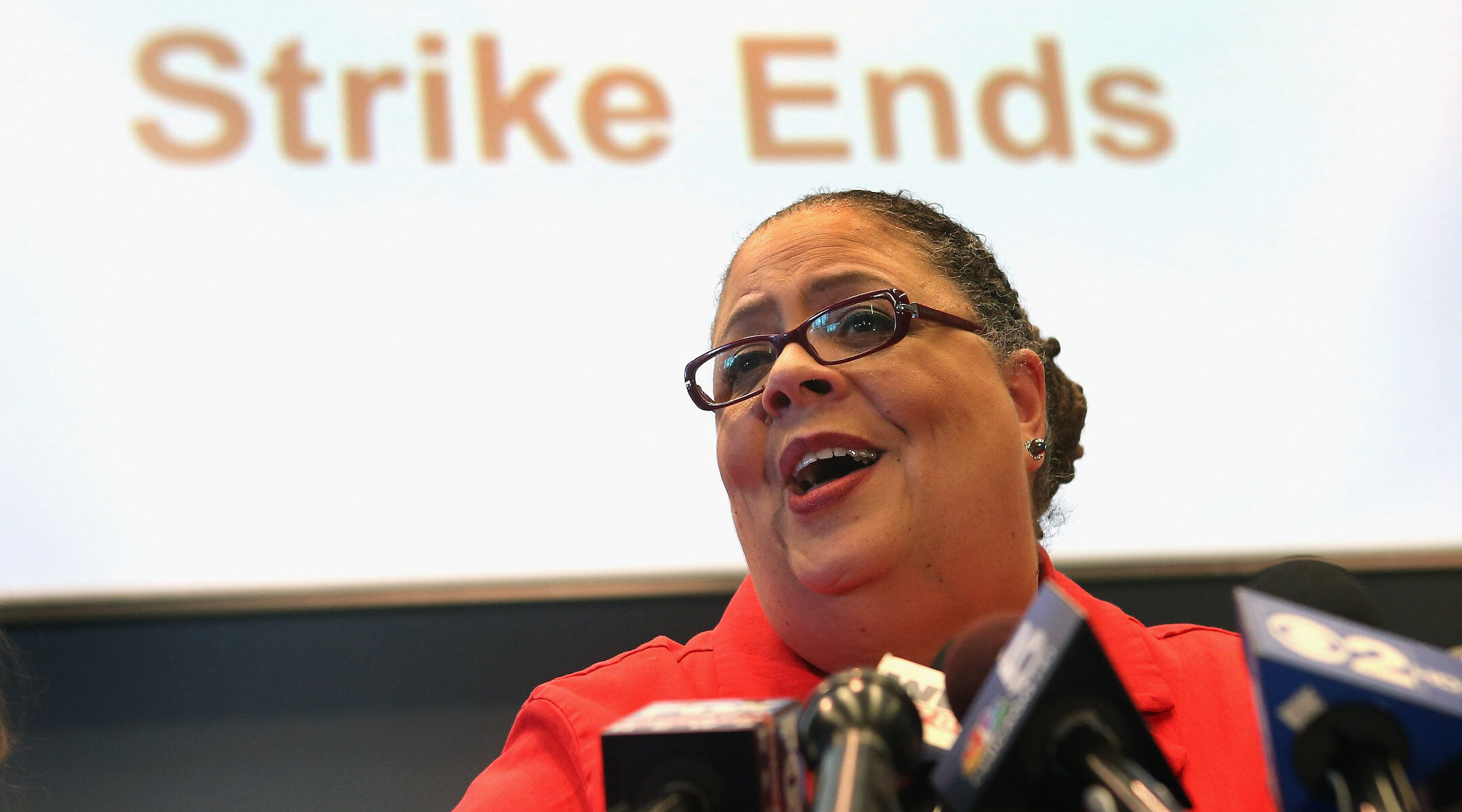 (JTA) — Karen Lewis, the firebrand former president of Chicago’s teachers union, has died at 67 after a long battle with brain cancer.

Lewis, a convert to Judaism who said she was attracted to the religion’s embrace of questions, ran the Chicago Teachers Union from 2010 to 2018. Under her leadership, the union became a model for a new breed of public education organizing in which teachers fought — and fought hard — not just for better pay and working conditions for themselves but for policy changes that they believed would benefit their students.

Lewis burst into public awareness in 2012 when she led her union in a seven-day strike, its first in a quarter century, that resulted in major concessions from then-Mayor Rahm Emanuel. The outcome showed teachers in Chicago and beyond that they could win by fighting aggressively, and the more recent “Red for Ed” national wave of teacher activism is seen as a successor to the battles that Lewis waged, clad in her union’s trademark color.

Born and raised in Chicago’s Hyde Park neighborhood, Lewis was the only Black woman in her graduating class at Dartmouth College in 1974. Returning to her hometown several years later, she became a chemistry teacher. She also continued asking questions about God of the sort that had gotten her thrown out of Sunday school at the Lutheran church her parents attended.

Especially after seeing the portrayal of Talmud study in the 1983 movie “Yentl” (which starred her high school classmate Mandy Patinkin), Lewis found herself drawn to Judaism. In 1993, at age 40, she converted after studying with Rabbi Elliot Gertel at Hyde Park’s Conservative Congregation Rodfei Zedek.

Lewis told the synagogue’s newsletter two decades later that Jewish values were baked into her vision for education organizing.

“Judaism is clear. When you reap your fields, you leave something for people who don’t have anything,” she said. “It’s all through Torah. You are commanded to treat those who have less than you as family.”

Gertel said Lewis had been a diligent student and a voracious learner.

“She never stopped studying Judaism and reading Jewish history, theology and inspirational writings, ancient and modern,” he wrote in a recollection to be distributed to the community from which he retired. “I was always impressed and inspired by the insights that she brought to her reading and to her own spiritual quest even as she faced pain and illness.”

Lewis was a regular at services for decades, especially after taking on the steep responsibilities associated with union leadership.

“Shul has always been a place where I could have some refuge,” she told the Chicago Jewish News in 2013. “I am very very adamant about having that time. I tell people, look, you can schedule me whenever you need to schedule me, but Saturday mornings I am absolutely unavailable, because I need that time in shul.”

That year, just months after steering her union’s 26,000 members to a new contract, Lewis celebrated her bat mitzvah at Rodfei Zedek, which she called “one of the most welcoming places of worship I’ve ever experienced” in part because of its diverse membership.

“I’ve been to lots of other Bar and Bat Mitzvahs and this one was the best ever,” her successor at the union, Jesse Sharkey, told Chicago Magazine in 2014. (Sharkey grew up Jewish in small-town Maine.)

“We were just coming out of the strike, school closings, and it was a crazy period of time,” Sharkey recalled. “On the side she was learning Hebrew. Sang, just belted it out, nothing like a pimply 13-year-old mumbling his Torah portion. It was gorgeous.”

Lewis clashed mightily with Emanuel, Chicago’s most prominent Jewish leader. Many in the city attribute the union’s invigoration to the closed-door meeting in 2011 when Emanuel famously cursed at the union leader. She was poised to mount a formidable challenge in the 2015 mayoral election when she first fell ill. But the pair later became friends, bonding over their shared religion.

Emanuel sent Lewis matzah ball soup upon her retirement, according to Chicago’s WBEZ, and they frequently discussed Jewish prayers and history. Could Lewis have unseated Emanuel as mayor had she not gotten brain cancer? He told the Chicago Sun-Times after her death, “As she would say, ‘That’s nothing but Midrash. It’s hypothetical. It’s a story made up of the Talmud.’” To the Chicago Tribune, Emanuel was more concise: “Who knows?”

At her bat mitzvah, Lewis read from the Torah portion Shelach, in which spies are sent to explore Israel and determine whether it would be a suitable home. When the spies return to the Hebrews, who have been wandering for 40 years since fleeing slavery in Egypt, all but two warn against entering the land. Lewis saw parallels between the messages the spies delivered and the naysaying she experienced before propelling her union to previously unimaginable prominence.

“It’s a perfect portion for me,” she told Chicago Magazine in 2012. “It’s about people being told they can’t do something, and they were able to.”

Lewis is survived by a sister, Keli; her husband, John Lewis, whom she met when both were teachers at Lane Technical High School; and the children, grandchildren and great-grandchildren she gained through her marriage.