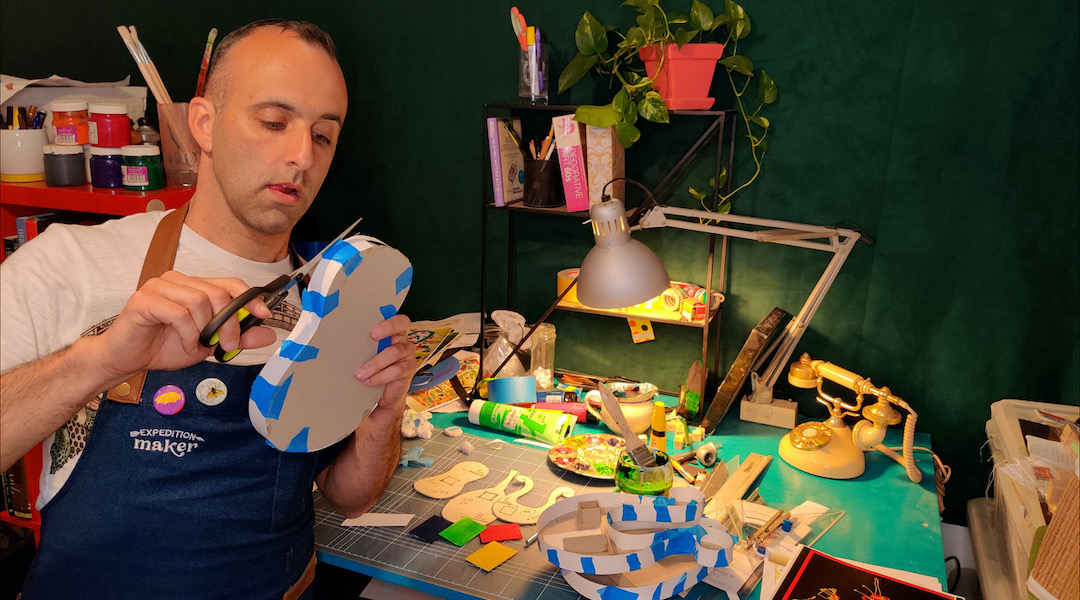 Alix Kramer, 25, wants to be a pediatric gastroenterologist. To reach her goal, she’s working toward a degree at the University of Chicago while living at the Lincoln Park Moishe House, a communal residence for Jews in their 20s and 30s.

But in her spare time, Kramer designs knitwear, building on a passion she has nurtured since age 7.

“When I started designing patterns last year, I realized there were no patterns for Jewish holidays,” Kramer said. “It really bothered me because making a nice Hanukkah sweater is something I always wanted to do.”

So Kramer came up with her own creation: a hand-knit sweater featuring a menorah with snap-on flames, allowing its wearer to display the correct number of candles on any night of the holiday. Kramer began selling patterns online for the sweater, which takes 100 hours to make.

In normal times, Camp Nai Nai Nai runs Jewish weekend summer camp experiences for Jews in their 20s and 30s that aim to help them connect with each other, do Jewish activities and have fun. With in-person programming impossible due to the pandemic, Camp Nai Nai Nai has been experimenting with creative ways to share those Jewish experiences together online.

In this latest project, for four consecutive Sundays beginning Feb. 21, selected artists will lead an interactive do-it-yourself class in their area of expertise via Zoom. Viewers will learn a new craft and work on it with a small group of fellow DIYers on a collaborative design project. Then there will be a watch party as contestants reveal their art pieces, and audience members will vote on their favorite maker. Each week one finalist will win and two will be eliminated.

After four weeks, four finalists will remain. On the March 21 show, judges will select the “Grand Makher,” who will receive a $5,000 prize. Anyone may watch the contest online; registration is required to join in workshops or vote. (Click here to register.)

“Our goal is to shed light on Jewish artists around the world and their diversity, especially in a time of pandemic when many of them are not working,” Klig said. 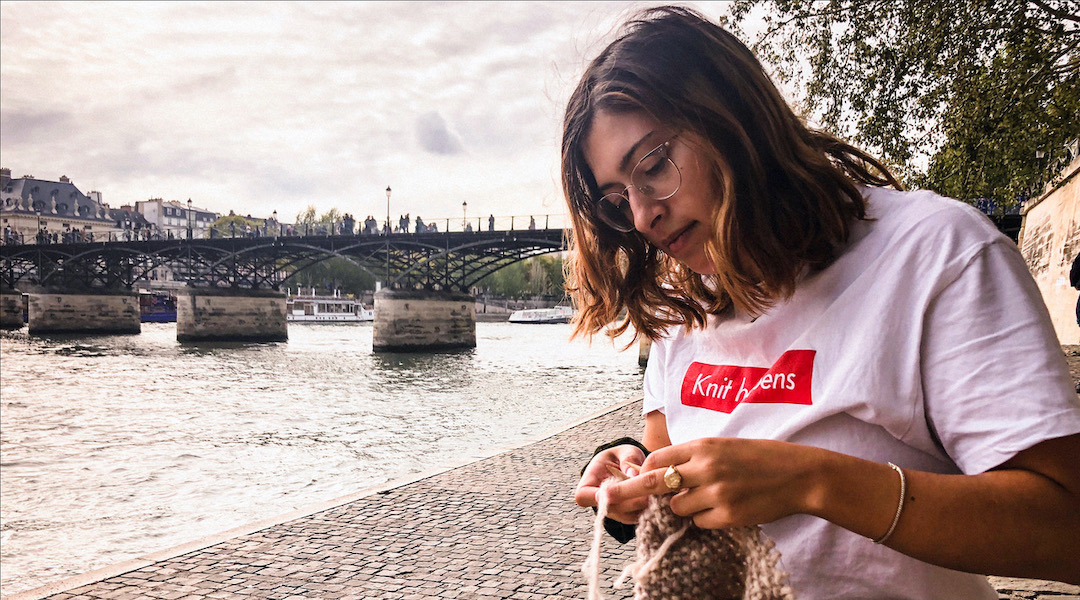 Alix Kramer, 25, designing her first sweater in Paris, is one of 10 artists to lead creative workshops as part of Camp Nai Nai Nai’s Expedition Maker program. (Courtesy of Alix Kramer)

Camp Nai Nai Nai is one of the myriad Jewish programs to come out of Moishe House, the nonprofit organization that’s funding Expedition Maker and operates more than 100 Jewish residential homes in over 25 countries on six continents.

“This is a very difficult time to be a freelance artist, so we wanted to be able to profile and highlight their work and show how creativity can be combined with Judaism,” said David Cygielman, founder and CEO of Moishe House.

Yoshi Silverstein, the Cleveland-based founder and executive director of Mitsui Collective, designed Expedition Maker’s artistic challenges based on the Jewish calendar and is one of the competition’s three judges. He also helped select the 10 artists from among over 100 applicants.

“We were looking at three criteria: the quality of their prior work, their screen presence, and their ability to talk about their Jewish identity and how that informed their art,” said Silverstein, whose background is in Jewish nature education. “Narrowing it to 10 was quite a challenge, but we were really impressed with the quality.”

Eli Kaplan-Wildmann is one of the select 10. An artistic director living in Jerusalem who spent years working on Broadway and TV production sets after graduating from New York University, Kaplan-Wildmann, 37, is working on a project to reimagine books as one-on-one theatrical experiences.

“Today, everyone makes Instagram stories and curates their feeds. But somehow Judaism hasn’t caught up with that,” he said. “People are thirsty for beautiful and contemporary aesthetic design in their Jewish observance, and we need to find artists who are going to give it to them.”

He recently crafted several hundred hand-sewn Passover Haggadahs at $99 each.

“This contest is really cool in that it’s bringing more art into Jewish practice,” Kaplan-Wildmann said. “That’s missing for a lot of people.”

Ceramics maker Mia Schon is another artist participating from Israel (the other eight are U.S.-based). A Bostonian who moved to Israel in 2014, Schon realized soon after immigrating that creating mosaics was a great way to turn drab, graffiti-covered walls in Tel Aviv into vibrant works of art. She obtains tiles, dishes and mirrors at the Jaffa flea market and uses them as elements in her variegated mosaics. 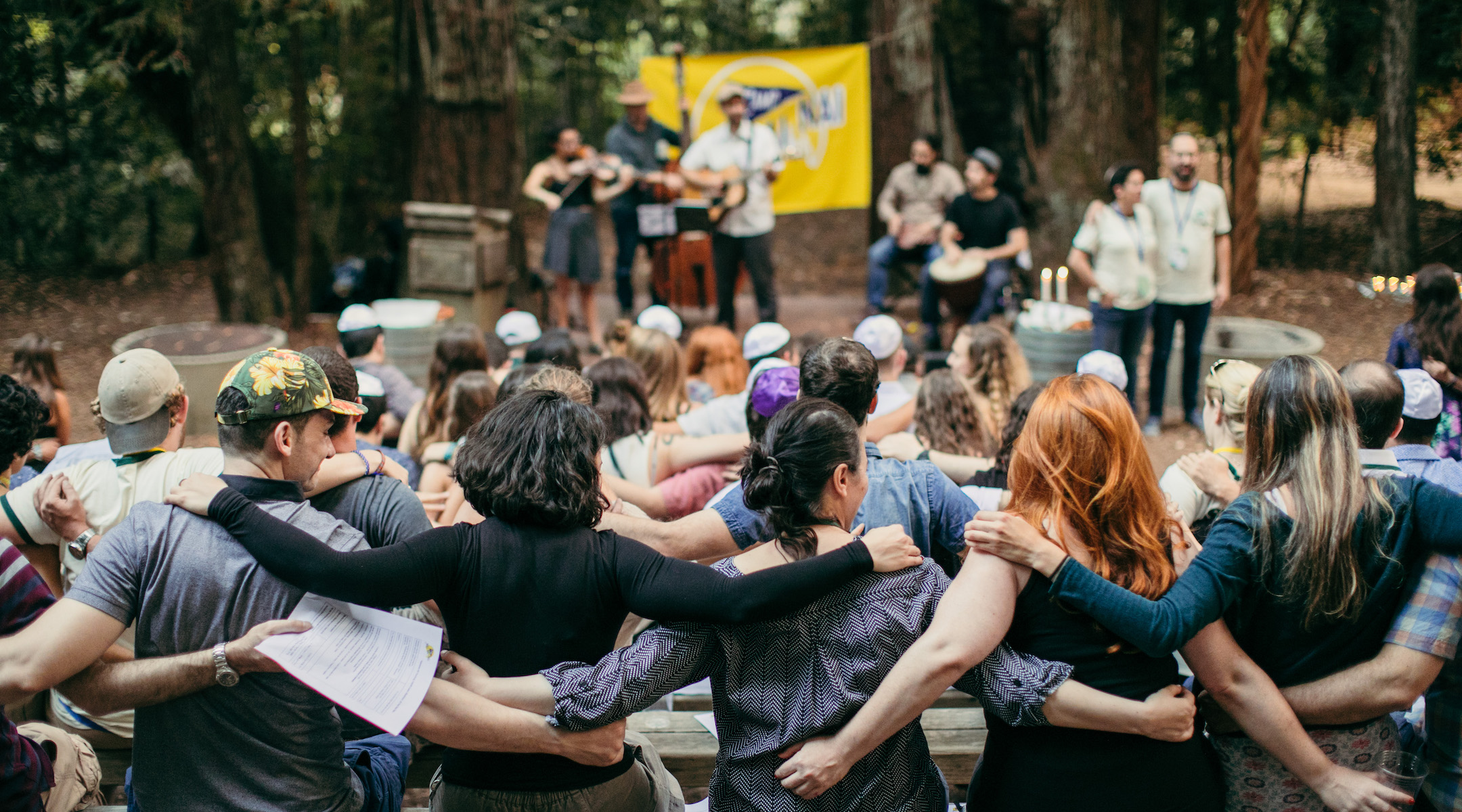 Participants at a Camp Nai Nai Nai – West Coast program in 2018. Since the pandemic started, Camp Nai Nai Nai has shifted to online programming aimed at Jews in their 20s and 30s. (Katie Krauss)

“One day, I saw an advertisement on Facebook for Expedition Maker and thought it would be fun to participate, especially right now with the pandemic,” Schon said. “There was an interview process on Zoom, with questions like ‘How does your art fit into Judaic thought?’ I’m really excited about this.”

Schon, 33, has completed 10 mosaics, most of them in Israel but also one in San Angelo, Texas.

Noam Mason, 22, a textile artist, educator and self-described “Boston-centric genderqueer Jew” in Worcester, Massachusetts, is one of the competition’s younger artists.

“This is a really great experience, and great exposure for everyone in the challenge,” said Mason, who has made everything from tefillin bags and challah covers to head scarves dyed with chestnuts and avocados.

Klig said she hopes this competition will not just be a showcase, but a way for Jews to connect across geographical distances.

“This is a new opportunity to connect with people in a way we would have never done previously,” Klig said. “Unlike a reality show where you just watch on TV, this is a chance to attend workshops with the artists, chat with them online and have a much more personal connection.”