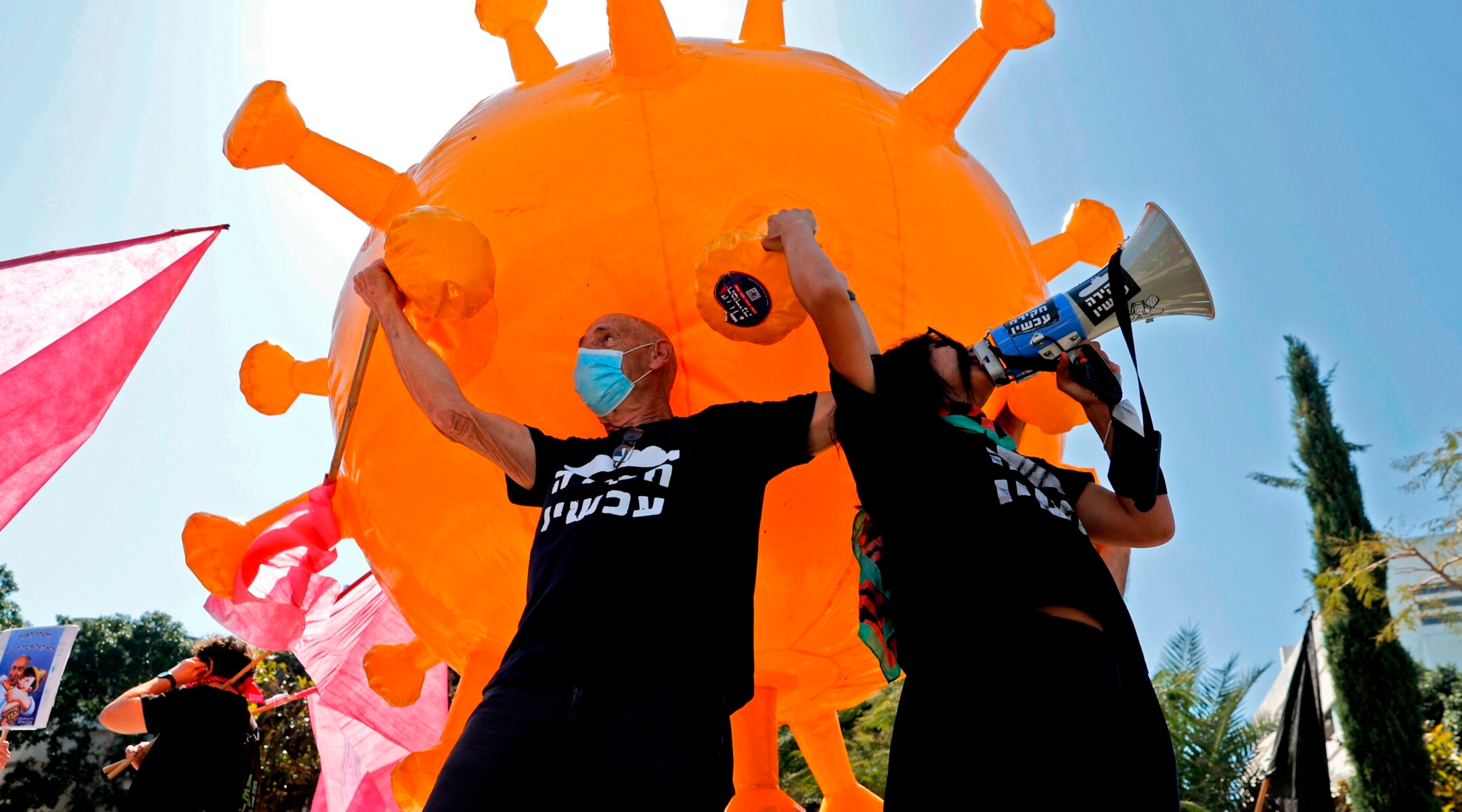 Israelis wearing costumers take part in a Purim parade Feb. 26, 2021 in Tel Aviv. Celebrations took place during the day because the government imposed a curfew to prevent the spread of COVID-19. (JACK GUEZ/AFP via Getty Images)
Advertisement

(JTA) — It might have felt hard for many to summon a festive mood this Purim, which was for some the first holiday to be unsettled by the pandemic and for others the last to be observed normally.

But in the end, Jewish communities the world over managed to don the costumes and do the partying typical of the holiday, which celebrates the triumph of the Jewish people over a plot to kill them. Often they did so outdoors; sometimes they went indoors, with and without distancing; and some they stuck to congregating from the safety of home.

Here’s what the holiday looked like around the Jewish world.

Reading the Megillah yesterday with the Jewish US military personnel at Camp Humphreys was a special Purim experience! 📜

In South Korea, the Israeli ambassador teamed up with a U.S. Army chaplain to hold a celebration for American troops stationed at Camp Humphreys. South Korea was among the countries to effectively contain COVID-19 throughout the year.

Los Angeles (and beyond)

Purim parody videos have been on the rise for a while, but they had their breakout moment in a year when Jewish communities, like others, had to ramp up their production skills. Here’s one, a hamantaschen-themed takeoff of Cardi B’s “WAP,” from IKAR, a nondenominational synagogue in Los Angeles. But you can also check out a Dallas synagogue’s “Grease”-spinoff, for example, or catch up on dozens if not hundreds of live-streamed megillah readings, including this one featuring readers in 10 cities from My Jewish Learning.

There was a packed crowd at 770 Eastern Parkway, the main synagogue at the worldwide headquarters of the Chabad movement. As with many events held there since it reopened three months into the pandemic, few wore masks and distancing was not observed. The Orthodox world was hit hard in the weeks after Purim last year, leading many to believe, and act as if, herd immunity had been reached, even as health officials said there was no justification for coming to that conclusion. Not all haredi Orthodox Jews carried on with the usual celebrations: A major yeshiva in Lakewood, New Jersey, canceled its party for the first time in 80 years. 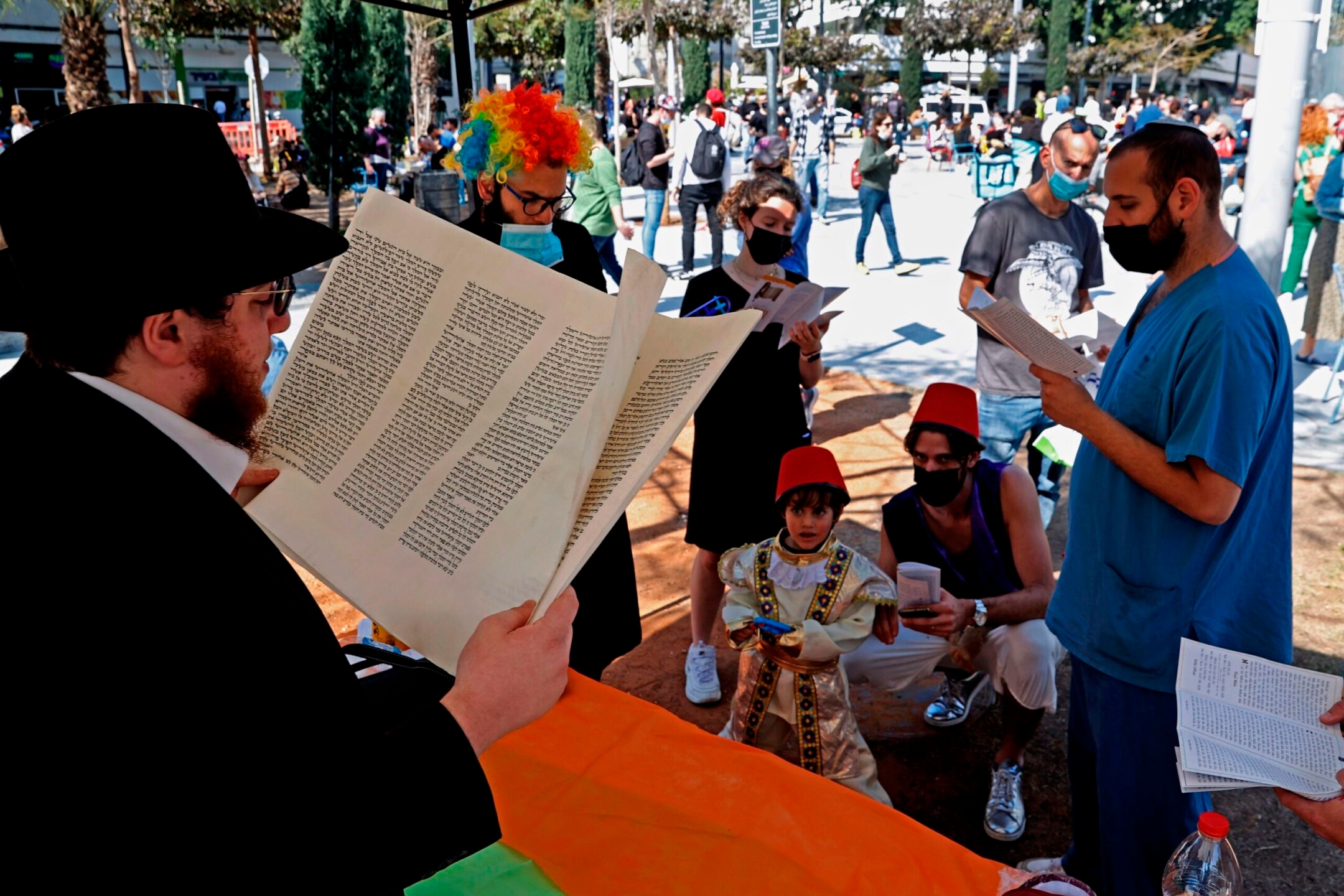 In typical years, Purim celebrations draw tens of thousands of people in some of Israel’s largest cities. Last year, those large gatherings were canceled as the pandemic first bore down; this year, no major gatherings were organized, but in a country just coming out of an extended third lockdown and with over half the adult population now vaccinated, people were eager to celebrate. Here, a family in Tel Aviv listens to the Purim story during the day Thursday, before an overnight curfew imposed to tamp down on parties. 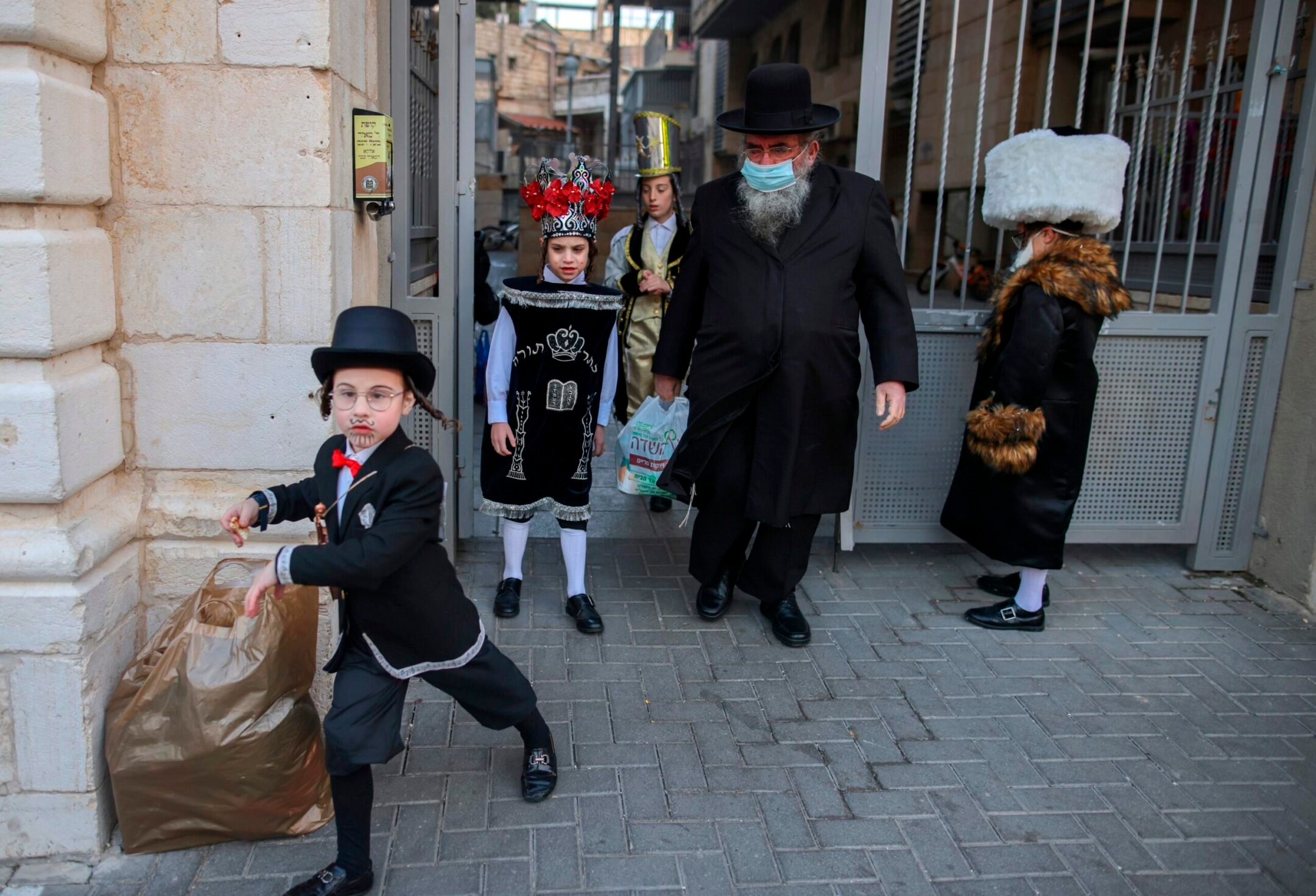 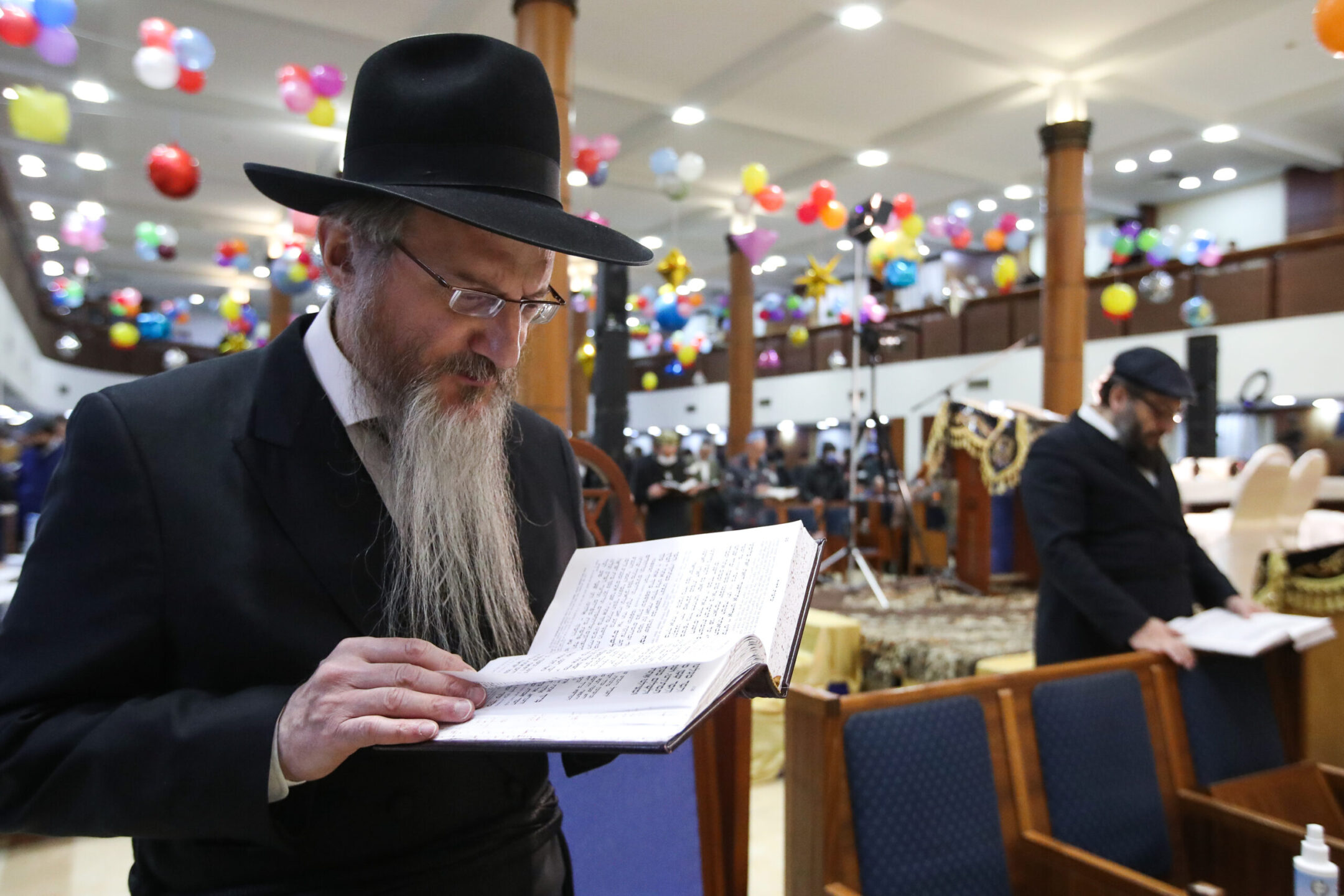 Russia’s Chief Rabbi Berel Lazar attended Purim festivities at the Jewish Community Centre in northeastern Moscow. The center was decorated with balloons and appeared from photos to have attendees spaced far apart. 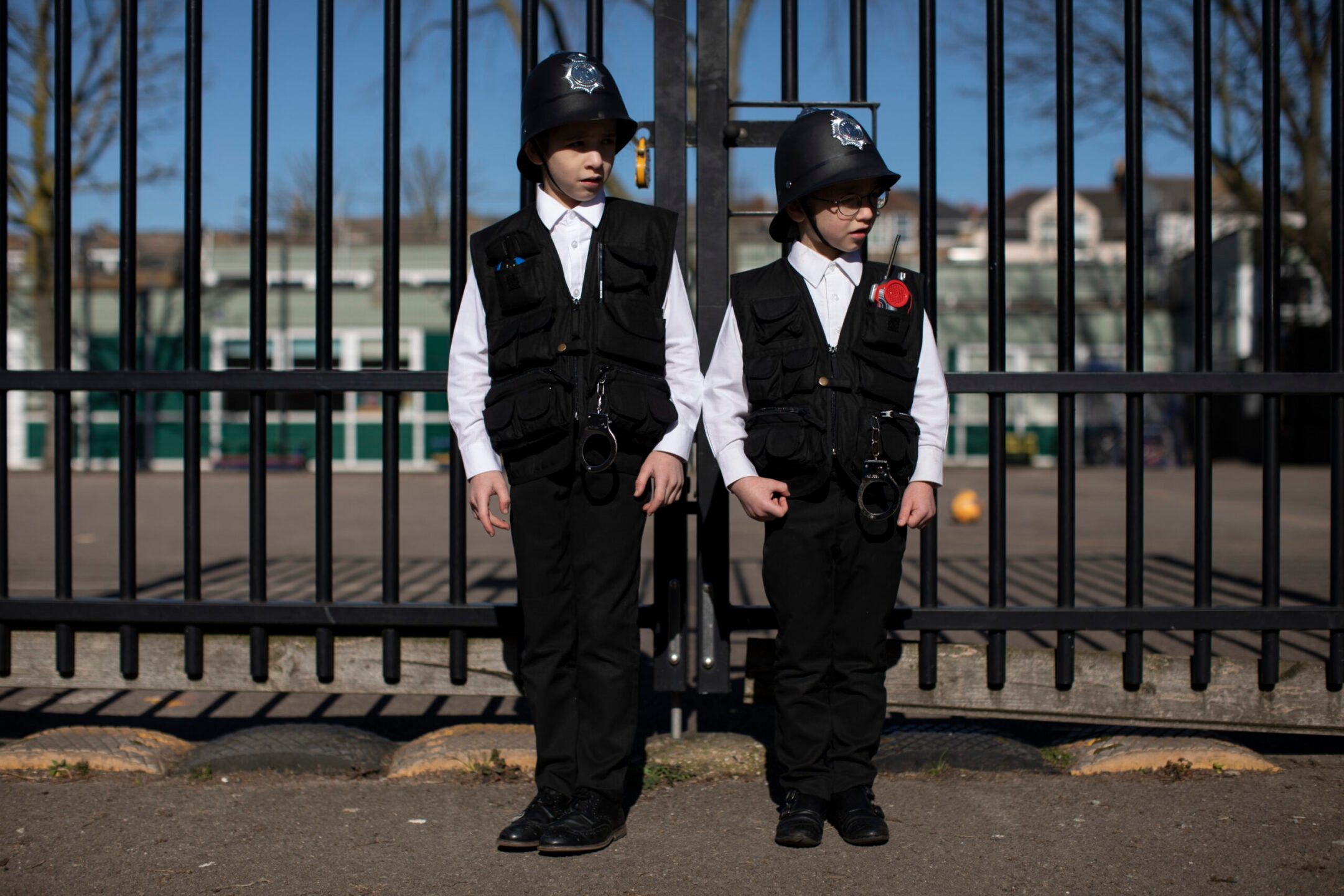 Children still gallivanted in costume around Stamford Hill, a heavily Orthodox neighborhood of London, on Purim, but most other festivities were scaled back. British rabbis urged Jews to leave mishloach manot, traditional gifts of food, on doorsteps rather than getting close enough to hand them over directly, for example. 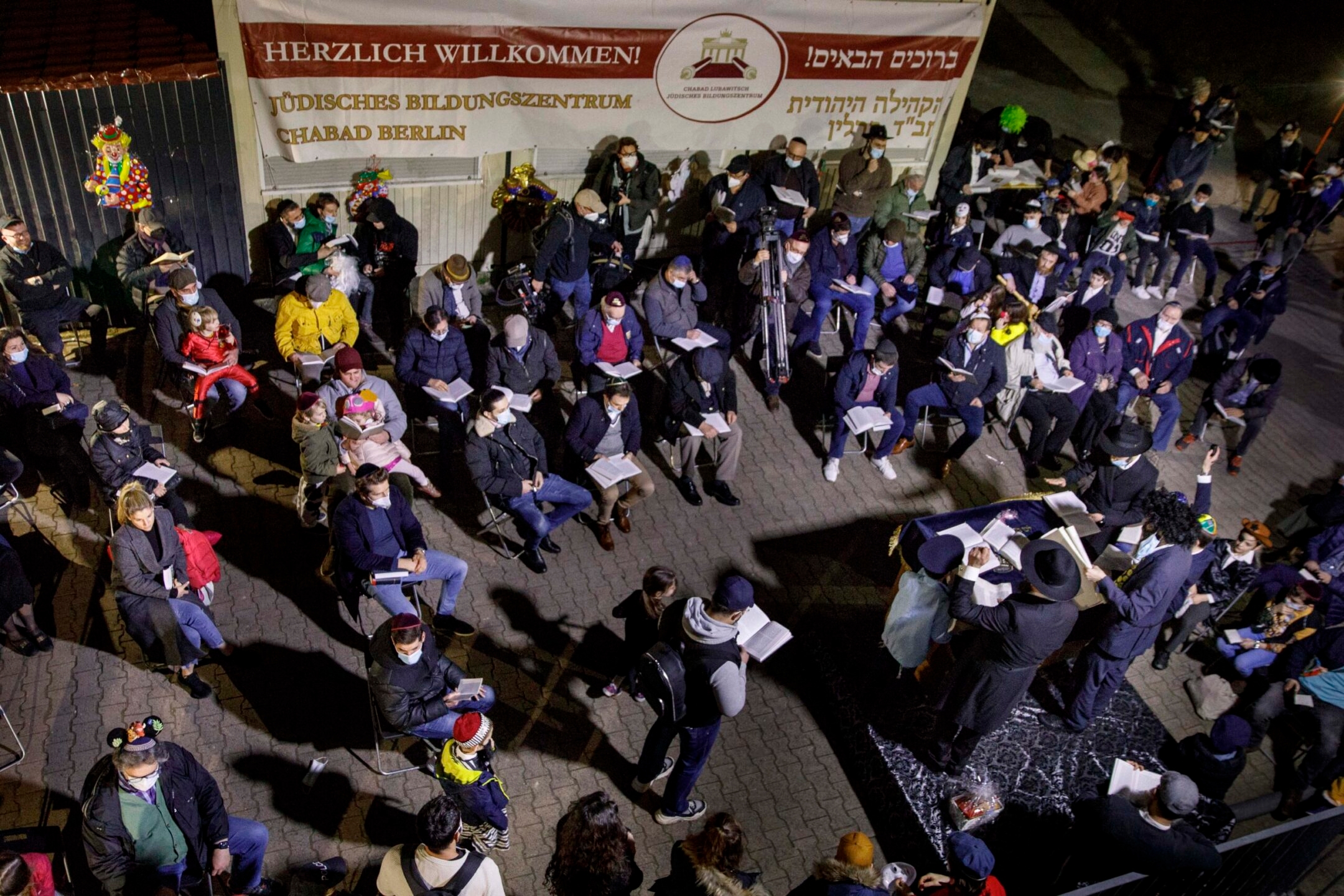 Chabad held an open-air service in Berlin, where indoor services are prohibited because of the pandemic. This year, Germany is marking 1,700 years of Jewish life.