From ‘Seinfeld’ to WWII Morocco, these new Haggadah options will spice up your Passover Seder 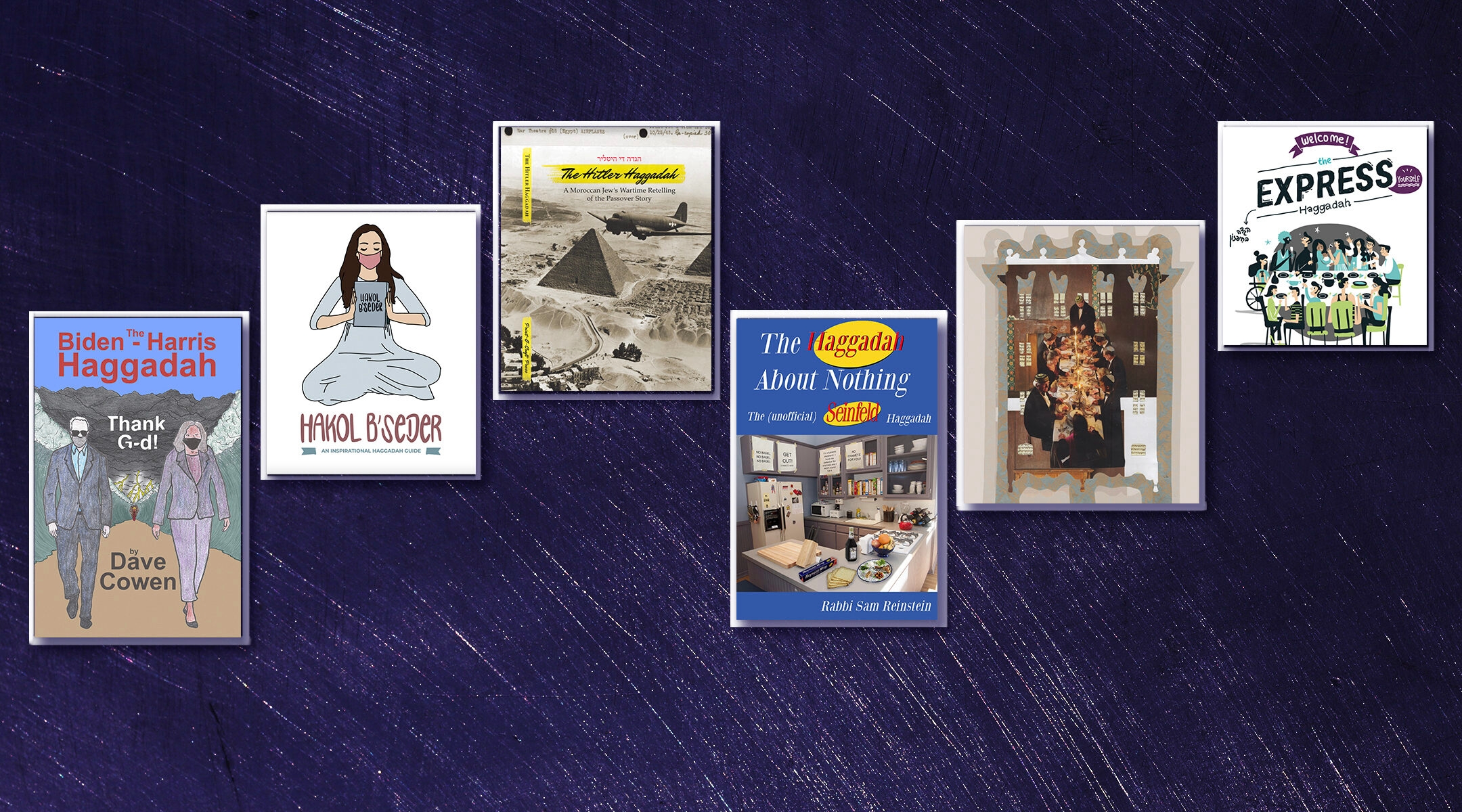 (JTA) — The pandemic has altered the experience of the Passover Seder, but one thing hasn’t changed: It’s a golden age for creative Haggadahs.

Artists, comedy writers, a range of clergy and more have given the ancient text a modern spin in recent years and disseminated them widely online with the help of self-publishing platforms and aggregation hubs such as Haggadot.com, which also allows users to customize their own.

But the sheer number of Haggadahs — and their various topics, which range from political issues to playful humor — can make choosing a fresh one a bit overwhelming. Here are a few new notable examples to try if you’re attempting to give your Seder a makeover, whether it’s held on Zoom or in person.

For those mentally afflicted by the pandemic

Bari Mitzmann, a Jewish blogger with a sizable Instagram following, for the second year has spearheaded a joint Haggadah project she calls “HaKol B’Seder” — in Hebrew it can mean either “everything in the Seder” or “it’s all good.”

Her thorough Haggadah and broader guide to the holiday weaves in an array of female voices — ranging from chefs to moms to therapists — who either talk about how a specific part of the Seder resonates with them or provide tips on how to fruitfully get through the Passover season. It’s aimed at those feeling overwhelmed by the COVID pandemic, all of the preparations that a Seder entails, the pressure to intellectualize the holiday’s themes or all of the above.

There are “wellness check-ins” throughout — one, for instance, discusses the “mental slavery” of loneliness and isolation, and of the drudgery of modern life (think cellphones, long work hours, etc.). There’s a guided meditation session accessible through a QR code. Then there are several recipes and food ingredient checklists to help the busy crowd with meal prep (including a couple of fun cocktail suggestions, like the Nile Sour, which includes cognac and honey).

For those who exhaled when Trump left office

Dave Cowen has contributed to humor sites such as McSweeney’s Internet Tendency, and that flavor of humor — intelligent, knowledgeable about politics and current events — shines through in his latest work, “The Biden-Harris Haggadah: Thank G-d!”

Cowen imagines how various figures, ranging from those in the White House to others such as Dr. Anthony Fauci and Merrick Garland, Biden’s attorney general nominee, would narrate a Seder, if all brought together in one room.

“Last year was tough. Who else needs a drink?!” Fauci says before reciting the blessing for the first cup of wine.

“We did it! A Jew is sorta in the White House! Well, in the neighborhood,” Doug Emhoff, Vice President Kamala Harris’ Jewish husband, says before leading the candlelighting.

Cowen had published “The Trump Passover Haggadah: ‘People All The Time They Come Up And Tell Me This Is The Best Haggadah They’ve Ever Read, They Do, Believe Me’” in 2018.

For the “Seinfeld” superfan

The Seder is definitely not “about nothing,” as the iconic ’90s sitcom “Seinfeld” is often described. Beyond a retelling of the Exodus story, which Jews have looked to for inspiration for millennia, the holiday meal’s guiding text is loaded with symbolism and ways to connect the biblical tale to contemporary times.

As Rabbi Sam Reinstein writes in the introduction to his “Seinfeld”-themed “The Haggadah About Nothing,” his goal is to use the series’ characters and storylines as a foil to show how not to experience the holiday. The Seder, he argues, is supposed to help transform its participants, to make them feel change in their lives. Part of the humor — and frustration — that surrounds Jerry, Elaine, George and Kramer on the show is that they never change, no matter how clear a moral lesson they are handed.

But the real appeal of “The Haggadah About Nothing” is its constant specific “Seinfeld” references. Reinstein is creative in finding connections and often cites multiple episodes at once to make his points.

Perhaps unsurprisingly, this is not the first “Seinfeld” Seder guide to hit the market — Cowen published a parody “Yada Yada Haggadah” in 2019, and Martin Bodek published a “Festivus Haggadah” last year.

(Watch Reinstein speak about his Haggadah in an event with MyJewishLearning here.)

For the kids who can’t wait for the food already

No matter one’s religious observance, the Seder can feel a bit long when the smells of matzah ball soup and brisket are emanating from the nearby kitchen.

Last year, Rabbi Matt Berkowitz and Dr. Ron Moses conceived a slim, fold-up seven-page pamphlet — aptly named “The Express Haggadah” — not to help families rush through the Seder, but to assist in getting them through the ritual in its entirety.

“‘What if the game ended at half-time?’ ‘What if the movie cut-off in the middle?’ Those would be unfinished stories,” a press statement reads. “‘The Express Haggadah’ enables families to ‘get through it’ before food comas and ‘shpilkes’ cut the seder off in the middle.”

True to form, nothing is left out, from the core prayers to the Exodus story, which is told in a series of quick blurbs.

For the artistically inclined

Some Haggadahs of centuries past were illustrated manuscripts, artist Emily Marbach points out in the introduction to her “Collage Haggadah,” which features her own beautiful pastiche works.

“The Middle Ages were a very fruitful time for new Haggadot. The Birds Head (I have made one collage in homage to that version), The Sarajevo and the Golden Haggadot are just a few of the most well known,” she writes. “There are the Mocatta, Prato, Barcelona, Darmstadt, the Hileq and Bileq — I could go on.”

Marbach, a London-based collage artist and printmaker, intersperses the pages of prayer and storytelling with dozens of stimulating works, some of them a blend of ancient imagery with a pop art sensibility.

Another artful option that could double as a coffee table book year-round is the Asufa Israeli art collective’s Haggadah, available in Hebrew and English. The group has produced a new version each year since 2013.

For the history buff

“Next year may we be free men in Palestine,” Nissim Ben Shimon wrote in 1943.

As World War II began to swing in favor of the Allies, Ben Shimon, a Moroccan Jew in Rabat, wrote what has been deemed “The Hitler Haggadah” — a semi-humorous Seder text heavily influenced by the events of the war. Translated this year into English from the local Judeo-Arabic of the time, it offers a running commentary of sorts about the war’s events, cracks Nazi jokes and infuses the Seder prayers with hope for a better future for Europe’s Jews, all from a rare North African perspective.

For the Reform Jew

The Reform movement in America has published many Haggadahs over the past 130 years, since it first brought to print an English-language version of a Haggadah published in Germany decades earlier. The movement’s latest offering is “Mishkan HaSeder,” which adds contemporary poetry and social justice commentary to the traditional rabbinic text.

Among the poets whose words make the new order are Emma Lazarus, Adrienne Rich and Yehuda Amichai. There’s also art by the painter, sculptor and ceremonial artist Tobi Kahn.

For “curious kids (and their grownups)”

“The Kveller Haggadah” isn’t brand new, but it’s still fresh. This Haggadah is full of colorful illustrations, a clear explanation of the Seder’s many complicated parts and short essay inserts by modern commentators on Passover’s past and present. (Kveller is part of 70 Faces Media, like the Jewish Telegraphic Agency.)