The Jewish community in Newcastle, England, is shrinking. But it’s getting some unexpected help. 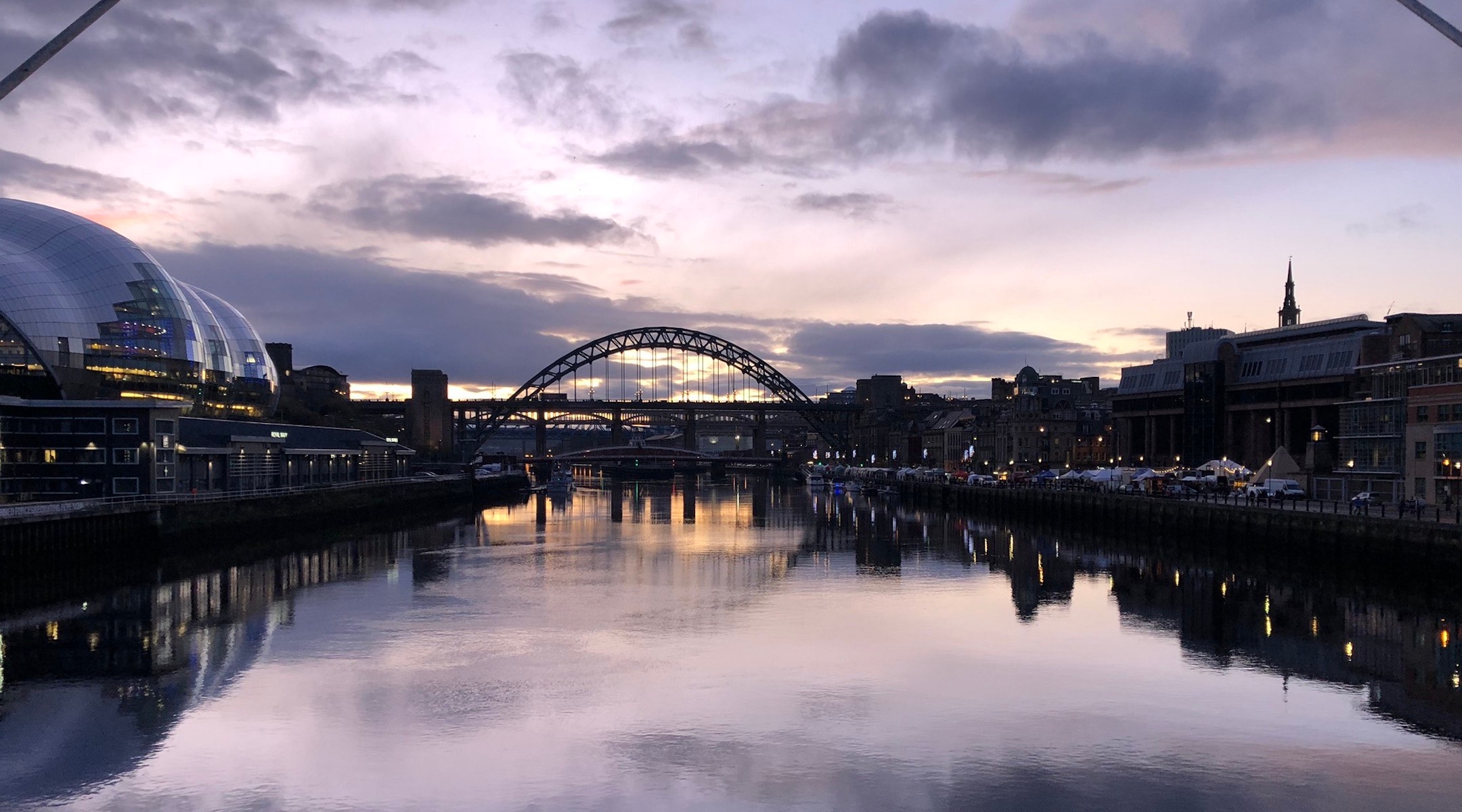 The Gateshead Millenium Bridge connects Newcastle from the north with Gateshead in the south over the River Tyne. (Jacob Judah)
Advertisement

LONDON (JTA) — Newcastle, the heart of northeast England, is not a small city with its approximately 300,000 inhabitants.

But to the few British Jews that cast their eyes northward from Manchester and London, the city is little more than what it was in Roman times – an outpost straddling the edges of Hadrian’s Wall.

The some 600 overlooked Jews who call Newcastle home are a microcosm of the challenges that have affected U.K. Jewish communities outside the London “Bagel Belt”: how to sustain a shrinking and aging community.

Yet just across the slow-running River Tyne, the redbrick houses of Europe’s last great yeshiva town are visible in the smaller neighboring city of Gateshead.

As if etched from an Isaac Bashevis Singer story, Gateshead is where prayer and Yiddish jokes escape through the open windows of the town’s multiple yeshivas, and where on a Friday evening black-frocked Talmud scholars sprint home to place Shabbat candles in windows. The Tyne crossing takes you to a different Jewish world.

Perhaps it was always meant to be this way — Gateshead was founded, so the histories go, by a shocked and dismayed group of Lithuanian Jews who, having stepped off the bows of the ships that ferried Jews from the Russian Baltic to the beating heart of industrial England, thought that the Newcastle community had anglicized to such a degree that they had lost their “authentic” connection with Judaism.

By 1929, Gateshead had become the British outpost for a prestigious network of Eastern European-style yeshivas, and over the decades its early winter nights played host to the best and brightest scholars of the haredi Orthodox world.

In recent years Gateshead, which previously had little contact with their brethren across the Tyne, has begun to extend a helping hand, even throughout the COVID crisis, by ferrying men needed to complete the minyan of 10 needed for daily prayers at Newcastle’s one Orthodox synagogue. They also bring bread from a well-regarded Gateshead kosher bakery. 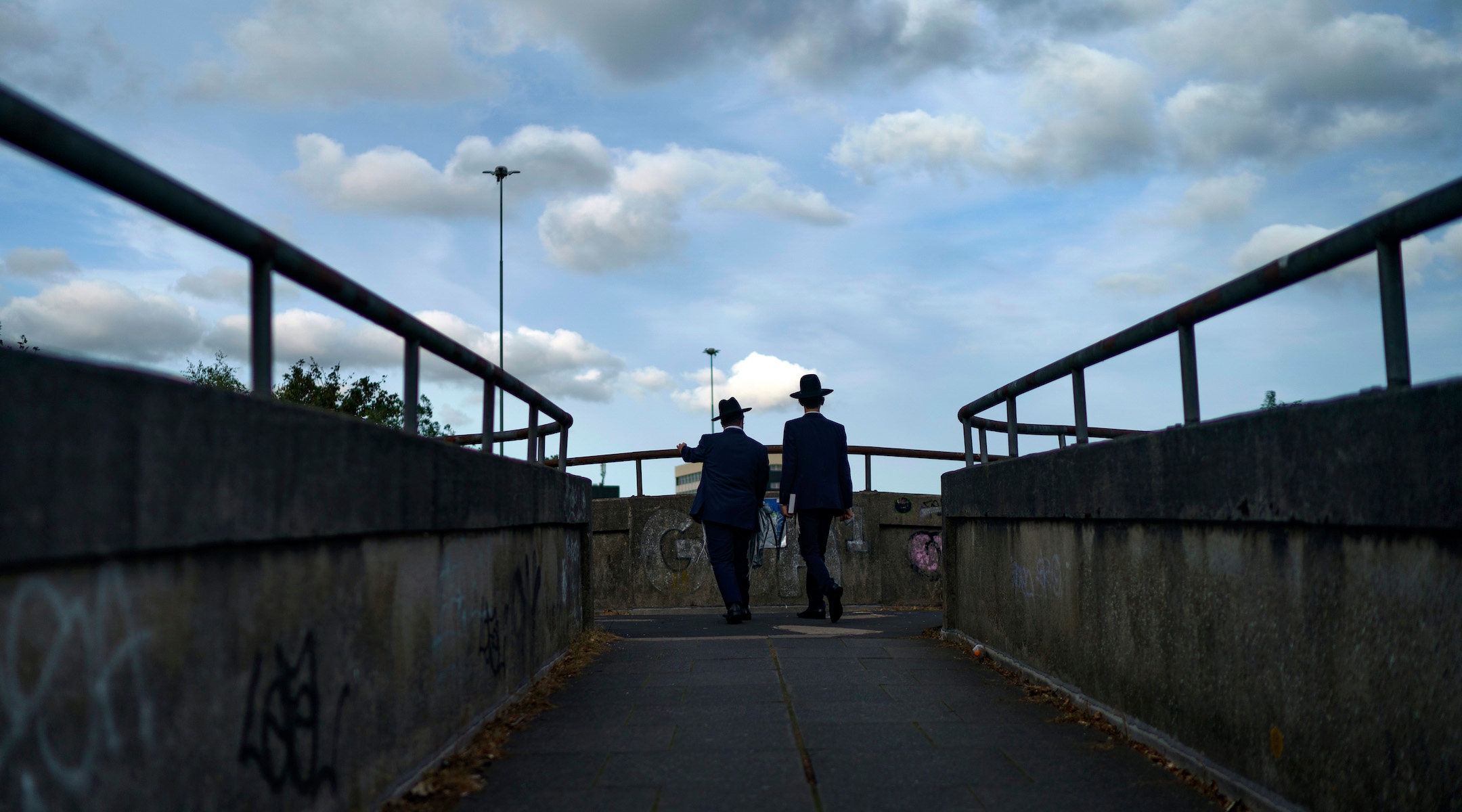 Nestled in a north Newcastle suburb, the modernist building that the Jews of Newcastle built for themselves in 1986 was supposed to be the future, a statement of intent that the community was here to stay — even though it went up during a time when the city’s Orthodox community condensed from three synagogues into one.

Now the brown-bricked building that was billed as a new long-term home for the community has been sold. It will be replaced by an apartment building.

“When that shul was built, I don’t think that anybody could have anticipated that it would only be in operation for 35 years – but that’s the reality, sadly,” Josephs said.

The former 300-seat synagogue is in many ways a window into the predicament of regional Jewish communities across Britain, many of which are shrinking quickly and trying to figure out where they are going. Where once were small and thriving communities, there is now only a flicker of a Jewish presence. Today Sunderland and Middlesbrough — the northeast’s second and third largest cities — have Jewish populations of one and four, respectively.

“I’m sad to say that in 10 or 20 years there may be no traditional Orthodox Jewish community in Newcastle,” he said. “The projections that were done some years ago saw the community was dwindling, and unfortunately that is still the case – it is dwindling still, but at a faster rate now.”

In 1950, there were nearly 2,500 Jews in Newcastle, but as the city entered a long industrial decline, the population has plummeted. The city was once a big producer of steel and materials to build trains and ships, as well as an import-export center for commodities such as coal. The import-export traffic has shifted out of the region, and other industries have become less profitable. 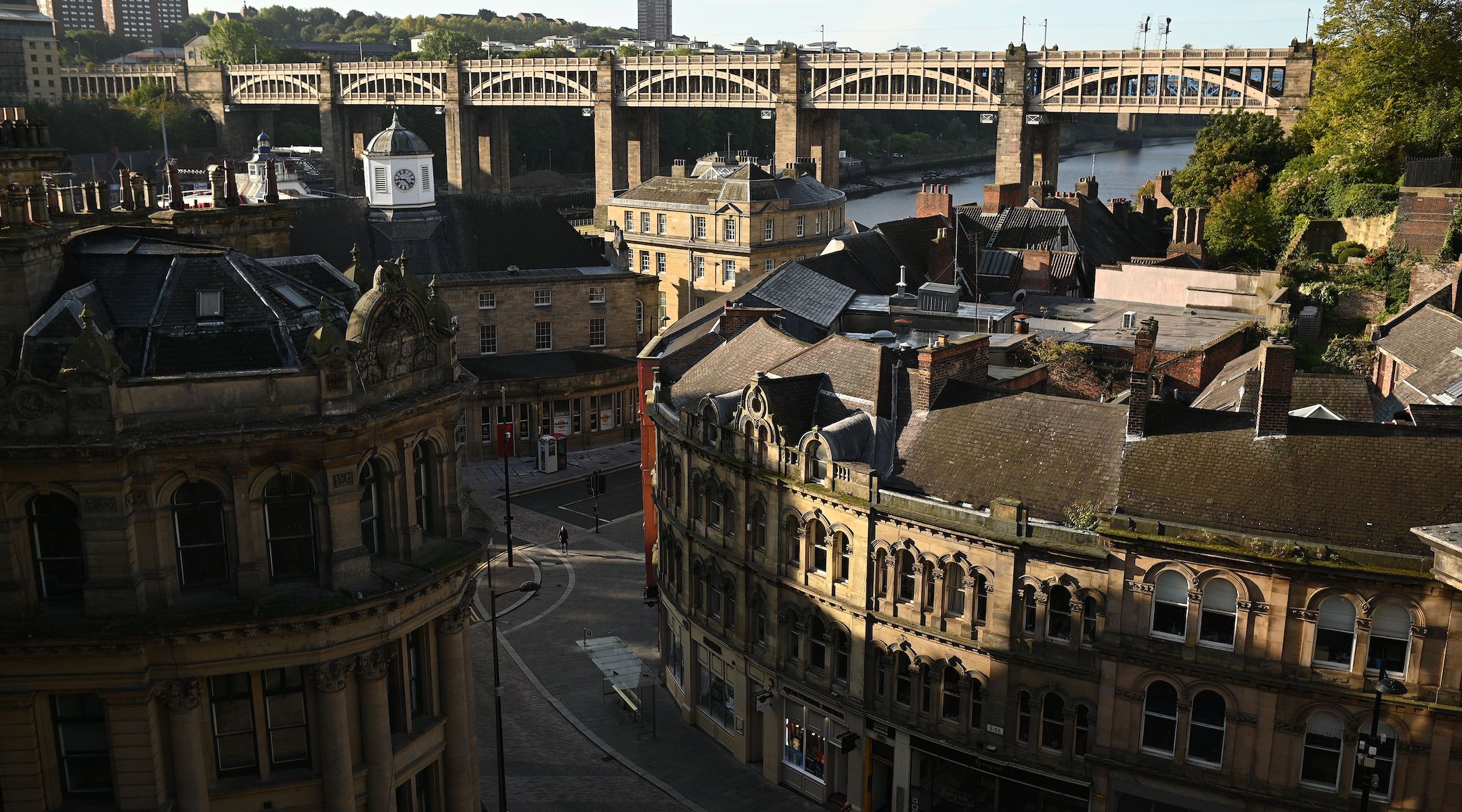 A view of Newcastle, a city in northeast England, on Sept. 29, 2020, after tighter restrictions were put in place to help mitigate the spread of COVID-19. (Oli Scarff/AFP via Getty Images)

For years, the pattern has been that students leave Newcastle for university and never return.

“It is a vicious cycle,” Josephs said. “We have shrunk because we are small to begin with, and as a result the ability to find a Jewish partner has diminished — and, of course, the streets of London are paved with gold and opportunity.”

In the region, only haredi Gateshead — driven by high birth rates, low housing prices and a constant supply of students into the community (fueled in part by the lower-than-London cost of living) — is growing.

But Newcastle’s Jewish future is, if not like Gateshead’s, perhaps a little more optimistic than many suggest.

In a redbrick former Methodist Hall, nestled in a suburb north of Newcastle, the Newcastle Reform Synagogue is bubbling along.

“We’ll still be here,” said Linda Scott, the cheerful chair of the synagogue. “Our numbers aren’t high, but we’ve recently had an influx of young families.” Scott estimates that her congregation stands at somewhere around 100 families, although far fewer attend regularly.

Across Britain, Liberal and Reform synagogues are increasingly coming to be seen as the only viable Jewish denominations outside of the major Jewish hubs, sustained by a diverse and geographically spread-out group of Jews who don’t want to attend more traditional synagogues.

Many midlevel towns that once had small but well-established Jewish populations — such as Blackpool, York and Bradford — have seen their once large Orthodox congregations melt away and their Reform or Liberal counterparts remain. Even nearby Darlington, with its own tiny Jewish population, saw its only congregation read the room and switch denominations in the late 1980s. 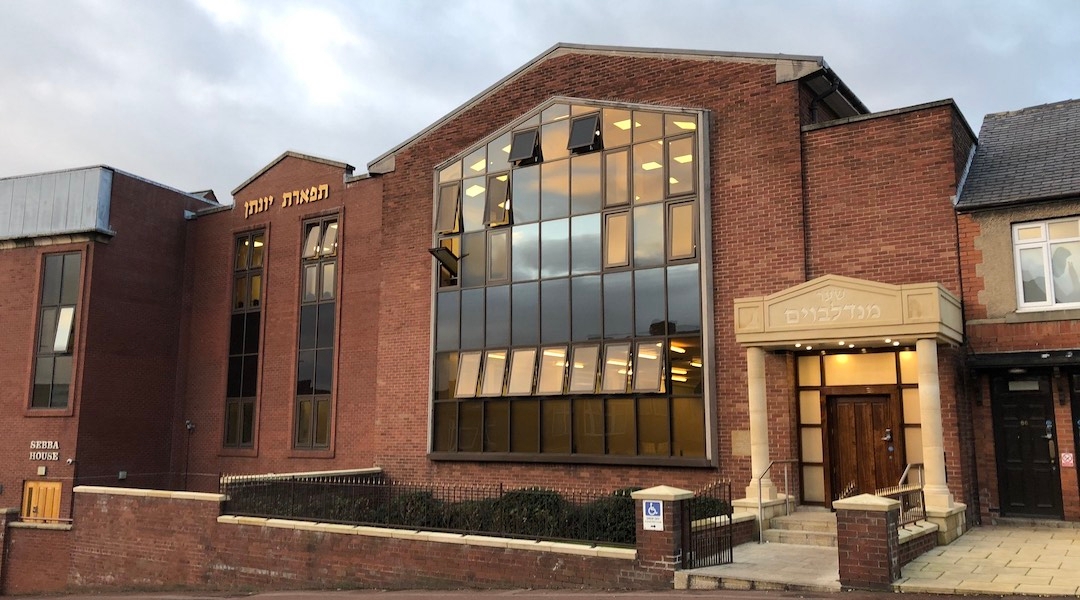 A view of the Gateshead Talmudical College, the city’s most prestigious yeshiva. (Jacob Judah)

Newcastle’s Orthodox may well be facing the same fate, says the synagogue’s part-time rabbi, Sybil Sheridan, who believes that the future in the region is increasingly in the more flexible progressive denominations.

Sheridan, 66, who in normal times zips up and down the railway line from London once a week to tend to her small flock, says that students — some of whom will stay — are a likely avenue that will sustain the community in the long run.

But in Newcastle, the rabbi warns, it would be a mistake to see the decline of one congregation as a net positive for the other.

“It is a mutual dependence, and neither can really survive without the other,” as each plays their role and operates institutions that the small community desperately need.

Condensation is a pattern. In June 2019, one progressive synagogue in Dundee, Scotland, decided to move to the nearby university town of St. Andrews after its congregation dwindled. Newcastle has also received the “refugees” from around the region — the last Jews of Middlesbrough, Sunderland and countless smaller cities that have shrunk and vanished.

Judaism outside of the major Jewish cities, Sheridan says, is a different and more traditional experience for many.

“In London, communities don’t feel the need to be involved. They come along to have Judaism done to them,” she said.

But, Sheridan added, with the sort of size at Newcastle Reform, “people feel they have a stake in the community and so they work that bit harder to keep it going.”

“If you look historically, Jews have always lived in small villages — think of the shtetlach of Eastern Europe. You don’t need big buildings to live a Jewish life. You need a community, but that community doesn’t need to be big. Having small communities as well as your large central ones is the way it should be.” 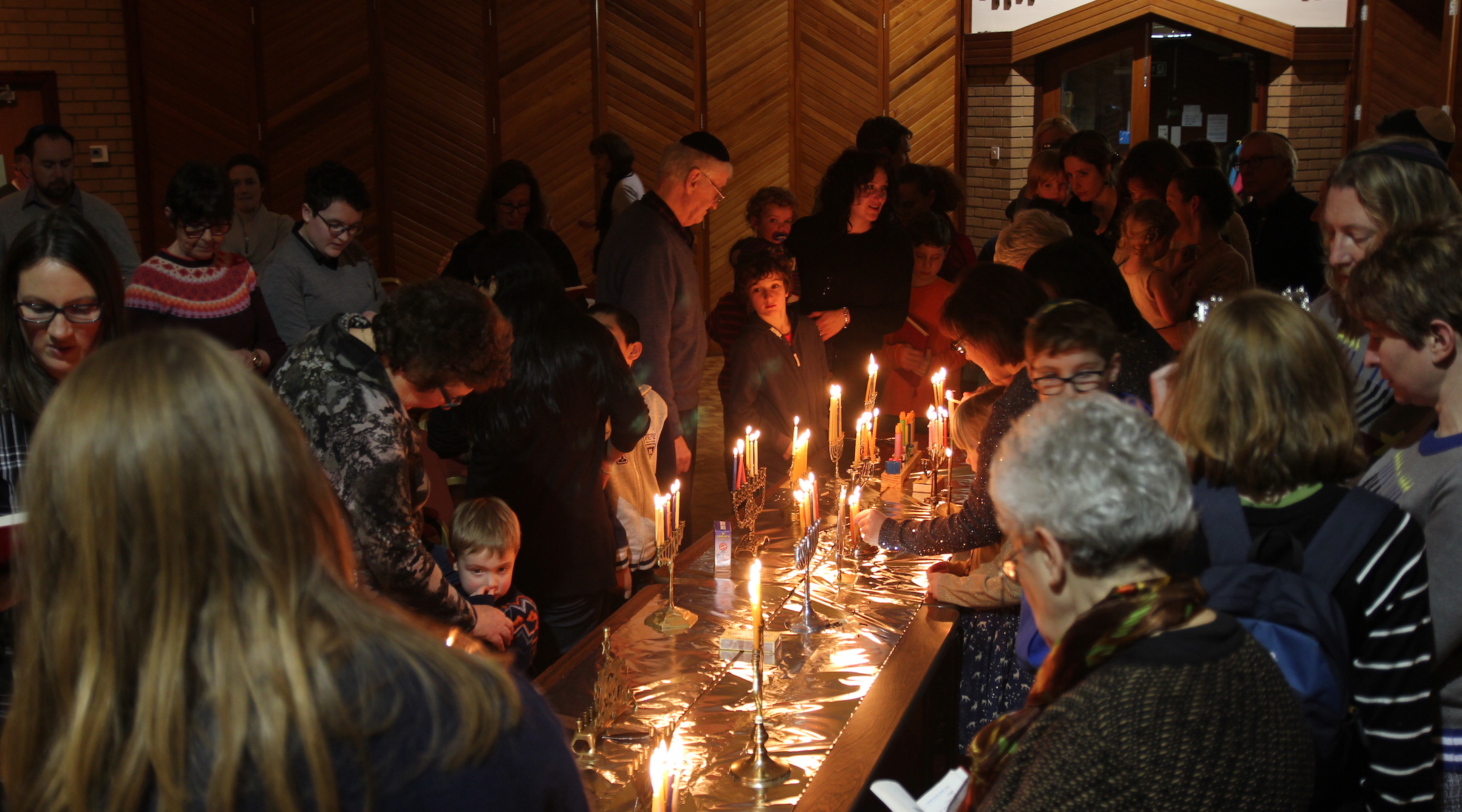 “It is important for the Jew in North London and the Jew in Manchester to know that there is Jewish life outside of those bubbles,” he said. “They have exactly the same Jewish life, in fact, probably more so because in North London you can drive on Shabbat and eat a bacon bagel and everyone will still call you a Jew. In Newcastle, you could never get away with that.”