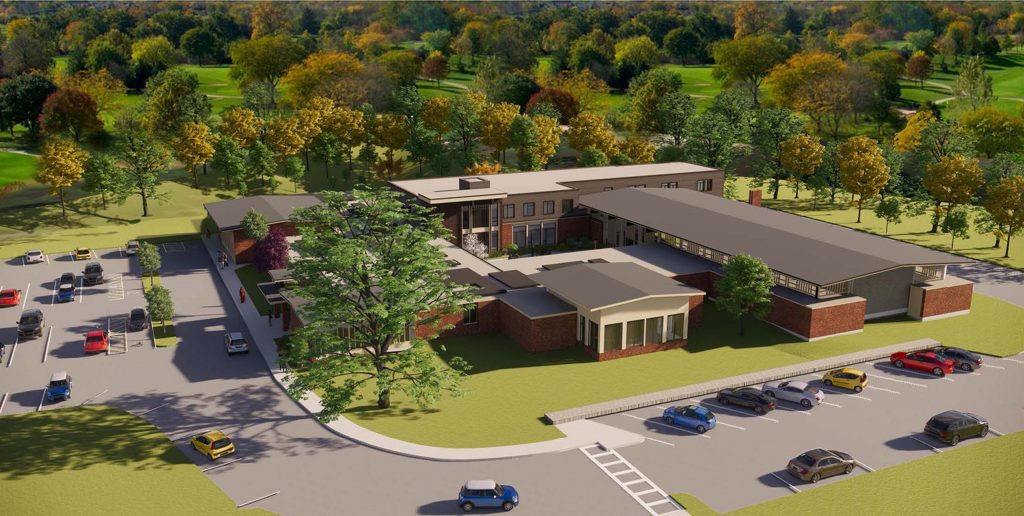 A rendering of the planned shared campus between Temple Reyim and Hebrew College. (Courtesy of Prellwitz Chilinski Associates)
Advertisement

BOSTON (JTA) – Two years after Hebrew College sold its distinctive building to pay off debt, the pluralistic institution has announced that it will be moving in with a nearby Conservative synagogue.

Hebrew College’s move, announced on March 16 and planned for December 2022, caps a decade of uncertainty and budget woes and staff reductions for the college, even as its rabbinical school and adult learning programs have grown steadily. The school celebrates its 100th anniversary this year.

Hebrew College President Rabbi Sharon Cohen Anisfeld told the Jewish Telegraphic Agency that she knew finding the right home for the school was a top priority when she was installed in 2018 as the first woman to lead the college.

“On the one hand, our new home would have to be affordable and sustainable. … On the other hand, the move couldn’t just feel like a story of contraction and loss,” she told JTA. “It had to feel exciting, generative, hopeful — a compelling vision for the college and for the wider community.”

That vision is achieved under the shared campus plan, she said. Several other Boston-based groups — including the Jewish Arts Collaborative; the Jewish Women’s Archive; and Keshet, an organization for LGBTQ Jews — will move onto the campus as well.

Under the space-sharing arrangement, both Hebrew College and Temple Reyim will maintain their independent identities while introducing economies of scale that facilitate long-term sustainability, according to the groups’ announcement.

“Our vision is to strengthen the present and future of Temple Reyim and welcome organizational partners that share our core mission,” said Temple Reyim’s rabbi, Daniel Berman.

Hebrew College has already raised more than $5.8 million of its $9.5 million campaign to pay for renovations to Temple Reyim’s current building and add two floors for office and program space. A philanthropy that she declined to name will add $1 million when the school reaches its campaign goal, Cohen Anisfeld said.

The college had a balanced budget last year, with annual expenses of approximately $10 million, Cohen Anisfeld wrote in an email. During the pandemic, senior leadership took a 10% pay reduction for this fiscal year and Cohen Anisfeld took a voluntary 30% pay reduction, to avoid across the board pay cuts for staff, she said.

Hebrew College has 75 rabbinical students and 128 graduates working in pulpits and organizations around the world. Nearly 2,500 people are currently enrolled in online programs offered by the college, including a Jewish parenting course and a learning network for young adults in Boston.