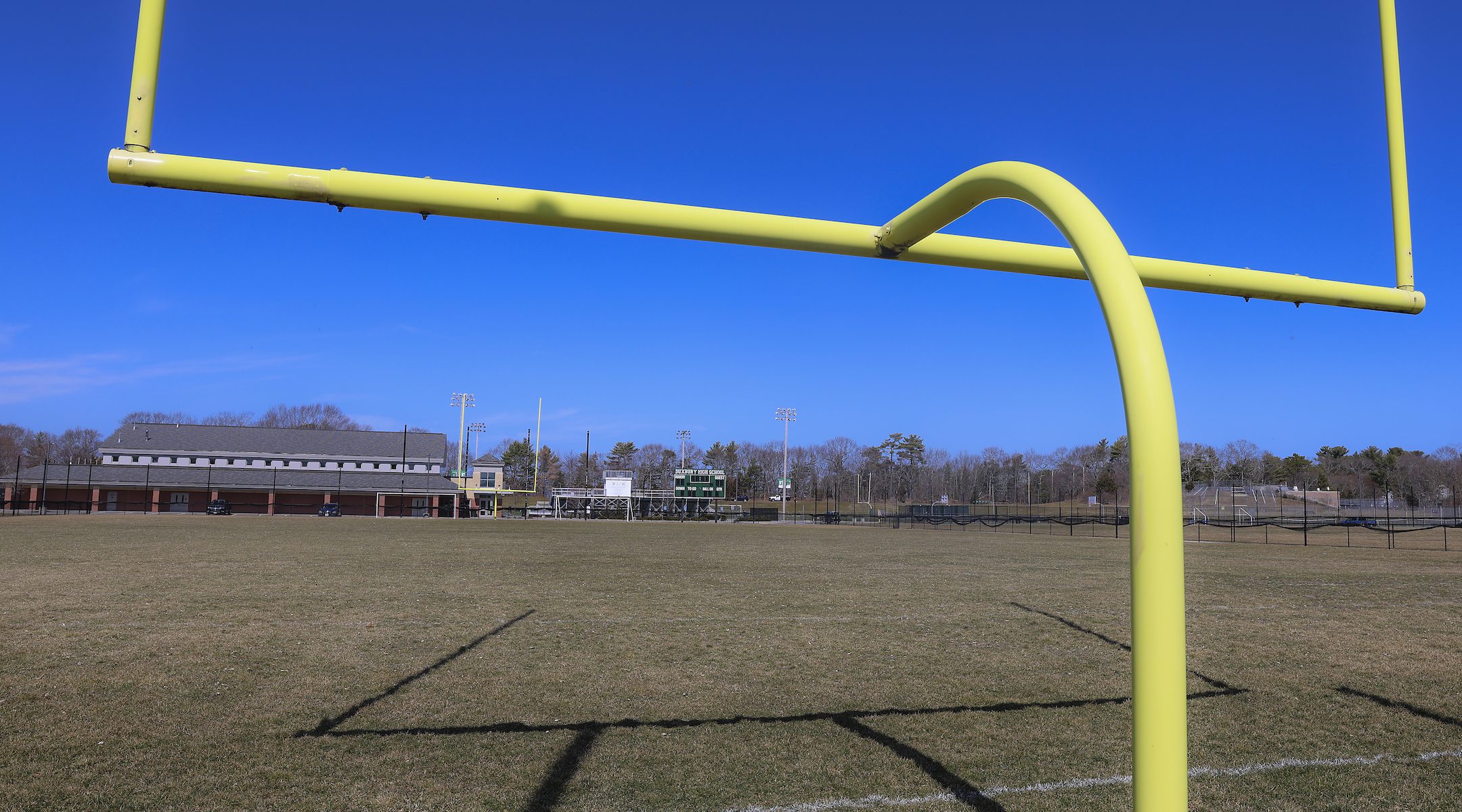 The Duxbury Athletic Complex at Duxbury High School in Duxbury, MA on March 23, 2021. The Anti-Defamation League is seeking an investigation into the football team's use of Holocaust-related terms. ( Matthew J. Lee/The Boston Globe via Getty Images)
Advertisement

BOSTON (JTA) – For members of the football team at Plymouth North High School south of Boston, the most notable aspect of the season opener wasn’t the date — March 12, after a months-long delay because of the pandemic — or the fact that they lost 35-0.

It was that members of their opponent, Duxbury High, used the name of a Nazi concentration camp and other words with Jewish significance to call plays.

Officials from Plymouth alerted Duxbury school leaders after the game about what they heard. Duxbury in turn has apologized and fired the coach, and the school has canceled its game this week. The New England Anti-Defamation League is calling for a full, independent investigation.

Football teams often use agreed-upon code words to signal play calls to each other. Legendary quarterback Peyton Manning, for instance, was famous for calling out “Omaha” on the playing field, a choice he later said was totally random.

Among Duxbury players, “it’s my understanding that ‘Auschwitz,’ ‘rabbi’ and ‘dreidel’ were some of the words used,” New England ADL Executive Director Robert Trestan told the Jewish Telegraphic Agency.

Trestan said reports of anti-Semitic or otherwise derogatory language are not uncommon in local and professional sports.

“What’s unusual in this case is that it seems to have been planted within the team’s playbook and strategy of calling plays,” he said.

School officials launched an investigation and quickly confirmed the reports.

“It has become clear that members of the Duxbury High School football team did in fact use anti-Semitic and potentially other inappropriate and derogatory language,” Duxbury Superintendent John Antonucci told the Boston Globe.

In a letter to the Duxbury community, Antonucci and school officials said the ongoing investigation would examine the role that adults played in stoking the comments, which the letter characterized as “highly offensive” without offering details about their content. He also suggested that consequences could be forthcoming for anyone involved.

While the players demonstrated poor judgment, “the responsibility for this incident also lies with the adults overseeing the program. In short, this was a systemic failure,” the letter said.

On Wednesday, 12 days after the game, Antonucci announced that the team’s longtime coach, Dave Maimaron, had been fired. Maimaron, who led Duxbury to five state championships, had issued an apology for the team’s “insensitive, crass and inappropriate” language and did not appear at the school’s March 19 game. Trestan said his group was working with Duxbury officials, and that Jewish residents and community leaders from surrounding towns disturbed by the news have been reaching out to the ADL. He wants to see a third-party investigation to understand what was actually said and how the play-calling system, which a former student told the Globe had been used informally for years, came into existence.

“Transparency is the pathway towards healing and educational solutions,” Trestan said.

The revelations have roiled the area and are driving renewed discussions about how to make local schools more inclusive. And a local group promoting diversity and inclusion in the area, Duxbury for All, headed by the Rev. Catherine Cullen, has condemned the team’s behavior and called for any adults involved to be held accountable.

Rabbi Howard Cohen of Congregation Shirat Hayam in Marshfield, a few miles away, told the Globe the episode is “a perfect teachable moment,” and has made himself available to school leaders.

And school officials said the play-calling system had been canceled and that training sessions were being planned to alert members of the team, known as the Green Dragons, about the impact of language on and off the field.

“Behavior that promotes anything less than full equity and inclusion is an attack on the core values of the Duxbury Public Schools and is inexcusable,” the school officials wrote. “We need to live these values, and we need to act accordingly.”