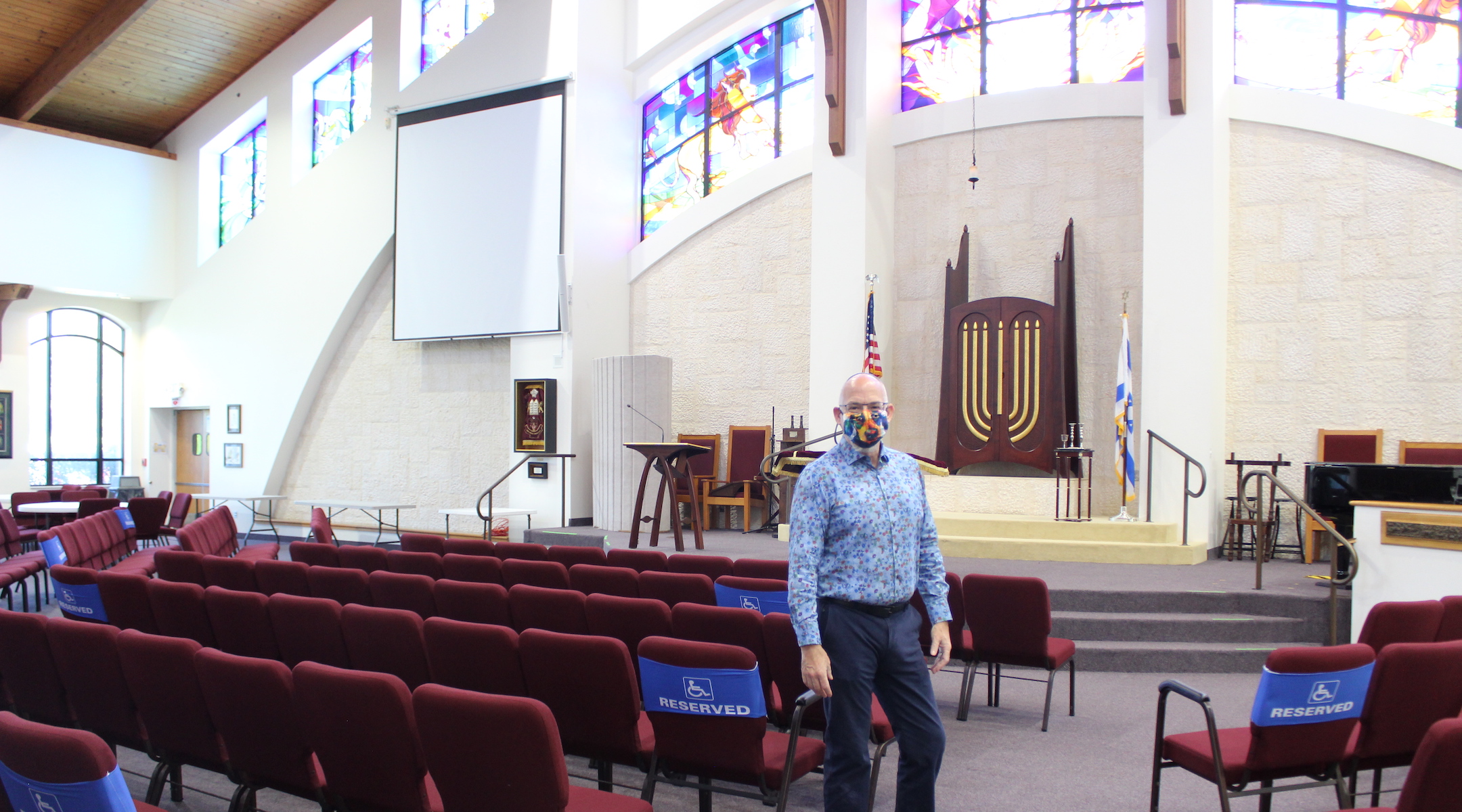 Rabbi Zev Sonnenstein stands in the sanctuary of Temple Shalom of Central Florida, a Reform congregation just outside The Villages that welcomes around 200 congregants for Shabbat. (Caleb Reed/JTA)
Advertisement

SUMTER COUNTY, Fla. (JTA) — When Ellen Faulkner told her friends that she was moving to The Villages, the sprawling senior community in Central Florida, they cautioned her: There was no Jewish life there.

Faulkner hadn’t noticed that during her visit, which was made at the urging of a high school classmate who told her rapturously about what it was like to live in the 55-plus community that’s home to 125,000 self-described “Villagers.” She had been captivated by the free concerts, huge crowds in the streets, and endless restaurants and storefronts at Lake Sumter Landing, a waterside mall that caters exclusively to residents.

After returning home to Broward County, in South Florida, she and her husband immediately put their home on the market. It sold in a day. They were all set to begin their new life at The Villages, where as depicted in surreal fashion in the recent documentary “Some Kind of Heaven,” residents can play golf at one of 12 nearby championship courses, attend medical appointments and lunch dates by golf cart, and listen to live music each night in the many public squares.

In making the move north, Faulkner and her husband were indeed leaving an epicenter of Jewish life in the United States — one where massive retirement complexes such as Century Village and Wynmoor have been home to countless Jewish grandparents — to an area without much of a Jewish identity.

But five years later, they are steeped in an emerging Jewish landscape at The Villages, where Faulkner coordinates Amazing Jewish Women of The Villages, one of nearly 3,000 social groups available to residents.

“We have a network now,” Faulkner said. “We all feel connected because we have Jewish friends.” 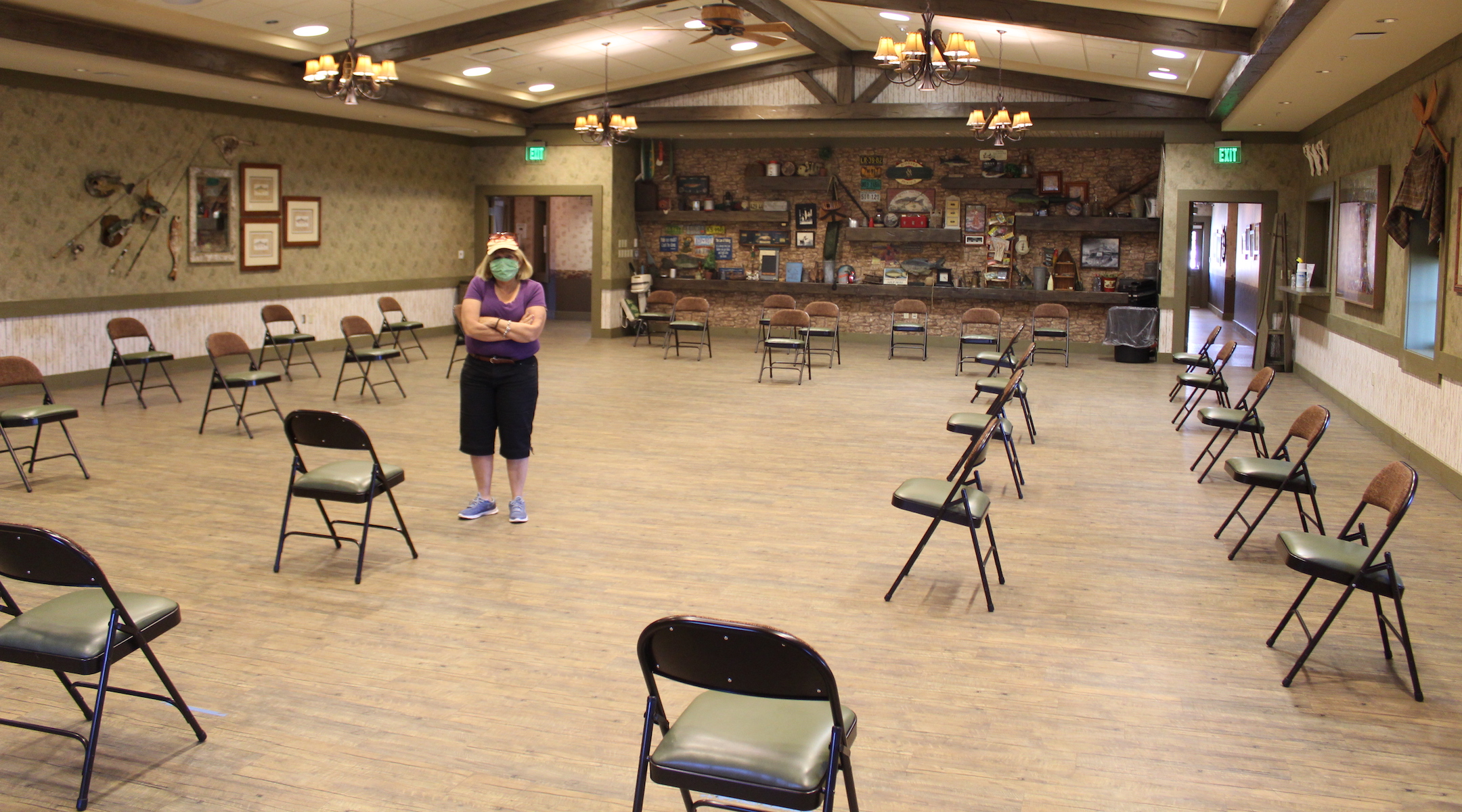 Ellen Faulkner started the social group Amazing Jewish Women of The Villages for the growing number of Jewish women in the Central Florida senior living community. They met in a social hall in The Villages prior to COVID-19. (Caleb Reed/JTA)

The explosion of Jewish life at The Villages has gone under the radar in recent years as the community has drawn more attention for its staunch support for former President Donald Trump. Residents voted for Trump, who visited the community twice during his presidency, by a 2-to-1 margin in both 2016 and 2020. Trump even joked about moving there after drawing criticism for retweeting a video filmed at the community in which one of his supporters shouted “White Power.”

But for Jewish residents — and the friends they hope to recruit to become neighbors — the changes are impossible to miss. The community now has two full-time rabbis, one at a Reform synagogue and another with Chabad. The area’s first-ever Jewish federation opened in July.

Rabbi Yoshi Hecht picked up and moved the Chabad center he founded in neighboring Ocala, a city of just under 60,000, after recognizing the population growth taking place at The Villages. Now the rabbi of the Chabad Lubavitch Jewish Center of Ocala and The Villages, Hecht estimates the local Jewish population to be between 3,000 and 6,000 — and said he gets calls daily from Jews considering a move.

Hecht’s Chabad offers a minyan every Shabbat and encourages the community to celebrate the holidays together. Before COVID, the residents held a Hanukkah party with 120 people in attendance.

Now that COVID has restricted the offerings, the rabbi has made adjustments. During the pandemic, volunteers have taken chicken soup and challah to their neighbors on Shabbat, and Hecht holds regular classes on Zoom. During Hanukkah, the community organized an antique car menorah parade.

“We try to do things that feed into their Villager and Jewish spirit,” Hecht said.

Regan Johnson, a retired state government worker from East Lansing, Michigan, moved to The Villages at the end of 2014.

“I picked The Villages because it had many golf courses for my husband, [and] it had many musical opportunities for me,” Johnson said.

Before moving, Johnson visited to find out what Jewish life was like.

“One of my concerns of coming to Central Florida was that there might not be a Jewish population at all,” she said.

Back in East Lansing, Johnson was highly involved in a close-knit Jewish community bolstered by Michigan State University.

“I sang in the choir, tutored kids for bar and bat mitzvahs, and organized the congregational seders,” she said. “I was active in every way.”

To her surprise, the Jewish population in The Villages was even more vibrant than it was in East Lansing.

To find some new Jewish friends, Johnson scoured the list of the thousands of social clubs at The Villages. She went through the club listings and saw interesting names that caught her attention, like the Borscht Belt and The Kibitzers Jewish social clubs, and more learning-focused groups like Chavurah.

The first activity she attended was a sold-out holiday gala organized by the Borscht Belt.

“There must have been over 300 people there,” she said, adding, “And there was dancing, and food and entertainment. It was a big deal.”

In a pre-COVID world, Johnson attended challah and hamantaschen-baking nights, Purim spiels, women’s seders and Hanukkah candlelighting events, though much of this has gone virtual over the past year.

“It’s really comforting,” she said. “These are my people.” 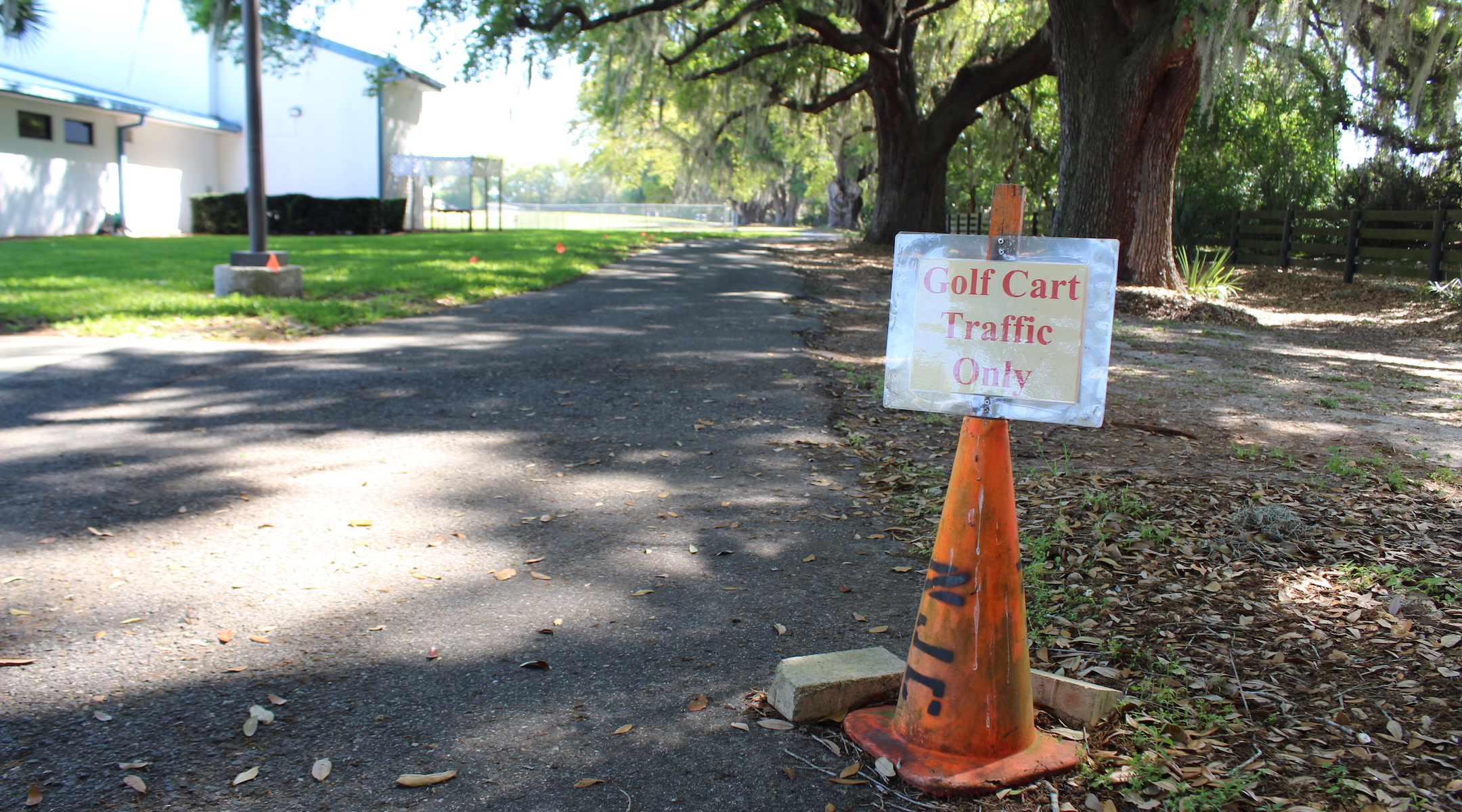 A road leading from The Villages to Temple Shalom of Central Florida in Oxford is known as the Temple Trail and is accessible only by golf cart. (Caleb Reed/JTA)

Temple Shalom of Central Florida, The Villages-adjacent Reform synagogue, started 20 years ago as a Villages social club called The Jewish Friends. Members met in a local church before they had their own building.

Temple Shalom now has 565 members, many of whom access the congregation by golf cart via an entrance to the property from the second hole of one of the championship golf courses. It’s called Temple Trail.

The synagogue was lay-led for 18 years until three years ago, when it hired Rabbi Zev Sonnenstein, a native of Monsey, New York. Before he took the job, there were no kids in the congregation. Now, due in part to the area’s rapid growth and need for workers to service the community, Sonnenstein has three bar mitzvahs on the calendar. Non-Villagers currently make up nearly 20% of the rising congregation.

“I’ve seen the Jewish population growing,” he said. “The population here is really starting to make an impact.”

On a normal, pre-COVID Shabbat evening, the temple sanctuary draws crowds of 150-200 worshippers. (Sonnenstein had a rocky arrival to The Villages, when he was arrested for a DUI in 2019 and lost his driver’s license, but he’s been a reassuring presence for his congregation in the Zoom era.)

Susan Feinberg, a longtime member and the temple’s marketing director, is originally from Baltimore but moved to The Villages nine years ago.

“Central Florida is famous for a lot of things most Jewish people don’t like to hear about,” she said, alluding to the region’s conservative politics. “But we have a fairly big Jewish population.”

Feinberg mentioned the abundance of Jewish social groups, but also pointed to how The Villages tries to make its Jews feel welcome.

“During Hanukkah, there are menorahs and candlelightings on all the public squares,” she said, adding, “They even put menorahs up in every recreation center and light the candles each of the eight nights. There’s an awareness here about Jewish life.”

The annual Tri-County Interfaith Holocaust Remembrance program, for example, draws crowds of over 1,500 people, both Jewish and non-Jewish.

The growing Jewish community in and around The Villages is still tiny compared to the Jewish population in South Florida, where half a million Jews live, many in massive retirement complexes such as Century Village and Wynmoor. And there are signs that the area isn’t overrun by Jewish seniors: The community’s website advertises the presence of eight churches, noting just one synagogue.

Sprinkled among the smiling billboards that line the flat highway leading to The Villages — “America’s Friendliest Hometown,” “Where Friends Are Like Family,” “Where Life Is An Adventure” — are ads for airboat tours, live baby gators and an X-Mart Adult Supercenter that’s open 24/7.

And some aspects of Jewish life can be challenging: For example, there’s no local kosher grocery store.

“We’re just an hour from Orlando, which is helpful because there’s more available there,” said Hecht, who noted that some of the local grocery stores do carry kosher products and his organization makes kosher meat available for purchase.

But for people like Faulkner, it’s the neighbors, not the availability of kosher meat, that makes a robust Jewish community. By 2017, two years into living at The Villages, she had made five Jewish girlfriends. And after they posted a picture of a group dinner on Facebook, they were overwhelmed with messages from other Jewish women in The Villages wondering why they hadn’t been invited.

That night, the group Amazing Jewish Women of The Villages was born.

“I realized there was a need,” Faulkner said.

The group set up a Facebook page — it now has more than 500 members — and invited anyone who wanted to be involved. In the beginning they met in local restaurants. But the group kept growing.

“At some point, we couldn’t do that anymore because the restaurants just couldn’t handle 60 to 70 Jewish women,” Faulkner said.

So they decided to become one of the 2,800 official resident lifestyle social clubs — alongside other popular groups like Vintage Sewing, Line Dance for Exercise and Model Railroad Club. This way, they could use the recreation centers for their gatherings.

Before COVID, the group’s monthly events, which feature entertainment, educational speakers and cultural-religious programming, had to be capped at 125 participants. Over the past year, attendance for Zoom events was disappointing, but Faulkner said that with most members having been vaccinated, they are starting to think about reconvening.

“We can’t wait to go back in person when it’s safe to do so,” she said, adding that “Because we have these groups, I feel comfortable living here and being Jewish here.”