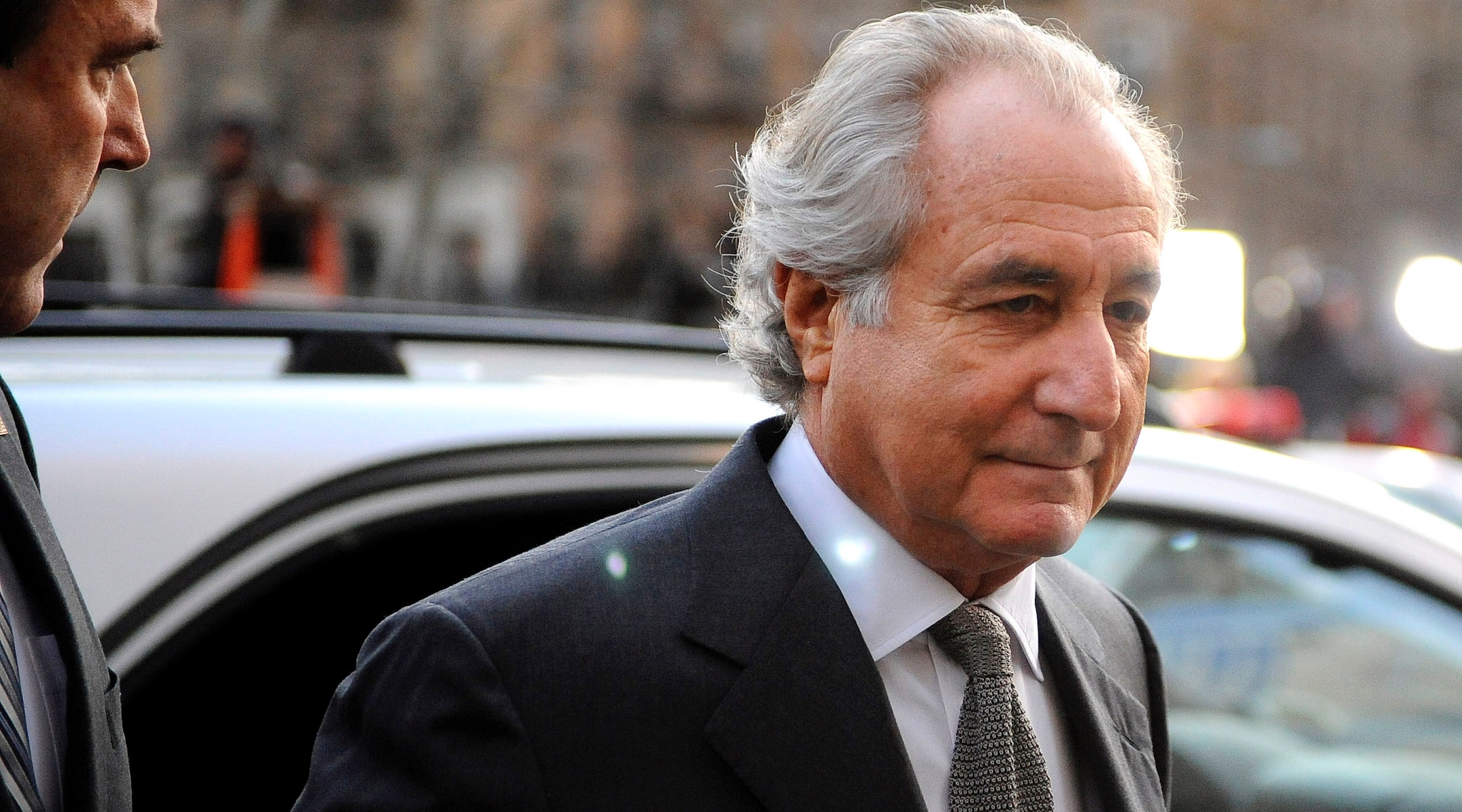 Bernie Madoff, pictured in 2009 ahead of his entering a guilty plea. (Stephen Chernin/Getty Images)
Advertisement

(JTA) — Bernie Madoff, the fraudster who ran a $17.5 billion Ponzi scheme ensnaring thousands of investors, including a long list of Jewish organizations and families, has died at 82.

Madoff was known as a selective money manager who made fantastic yet consistent profits for his clients until his entire operation was exposed as a scam amid the 2008 financial crisis. Madoff’s confession of his Ponzi scheme, in which he invented fake stock gains on paper and used new investments to pay off withdrawals from other investors, set off a virtual earthquake in the Jewish philanthropic world.

Among Madoff’s investors were European hedge funds, elderly retirees and a range of nonprofits. Among his victims were some of the most prominent Jewish institutions in the country, as well as Jewish celebrities like Holocaust survivor Elie Wiesel and Sandy Koufax, the Hall of Fame pitcher.

Many of those investors had met Madoff through the small world of Jewish philanthropy in New York and South Florida, and placed their money with his fund via friends of his such as Jeffrey Picower and J. Ezra Merkin, who operated hedge funds that invested heavily with Madoff. Merkin, a former president of the elite Fifth Avenue Synagogue in Manhattan, directed perhaps $1 billion of congregants’ money to Madoff, according to The New York Times.

So when Madoff, facing increasing pressure due to a national financial crisis, confessed his crime in 2008, the effects were felt across American Jewry. Following the confession, the Jewish Funders Network, which convenes Jewish donors, brought together 35 of the largest Jewish foundations to create a plan to provide emergency funding to some of Madoff’s victims.

Around that time, the Anti-Defamation League also documented an uptick in anti-Semitism that it concluded stemmed from the news of Madoff’s fraud.

The consequences of Madoff’s fraud have reverberated through the Jewish world for years. Some Madoff investors, such as Hadassah, had withdrawn more money than they invested over the years, and were subject to “clawback” suits in which they had to pay back the fictitious profits. While Madoff had claimed to be managing nearly $70 billion, most of that money (aside from what investors gave him) had never actually existed.

A trustee, Irving Picard, has spent the years since 2008 trying to recover the actual billions that Madoff stole. As of 2021, they had recovered and restituted more than $14 billion of the $17.5 billion Madoff took.

“They really felt that they had so much more money in their accounts,” Richard Greenfield, a lawyer who consulted for a handful of Madoff victims in Florida, told the Jewish Telegraphic Agency in 2018. “When they talk about their losses, they talk about the fictitious numbers in their accounts, and for some of them, it’s hard to explain: Your real loss wasn’t $200,000, it’s $10,000, which is what you put in.”

Madoff was born in 1938 in Queens, New York, and began working as a stockbroker in 1959. He married his wife, Ruth, that year and had two children. He originally made a name by investing in computerized stock trading in the Nasdaq market, and served as its chairman.

He began managing private clients’ wealth in the 1970s. While he told Diana Henriques, who wrote a book about him, that the Ponzi scheme began in 1992, the federal prosecutor who led the criminal investigation of Madoff believes that Madoff started the scheme when he began his money-management business.

He collected accolades as his ostensible success grew. Madoff was named the treasurer of Yeshiva University, the flagship Modern Orthodox institution, and gained a reputation as a reserved but effective steward of Jewish organizational finances.

Then it abruptly ended. Madoff pleaded guilty and was sentenced to 150 years in federal prison. His two sons, whom he swore had no involvement in his fraud, predeceased him, one by suicide on the second anniversary of Madoff’s arrest.

In 2020, Madoff requested compassionate release from prison, telling the court he was dying from kidney disease. His request was denied.

He is survived by his wife.