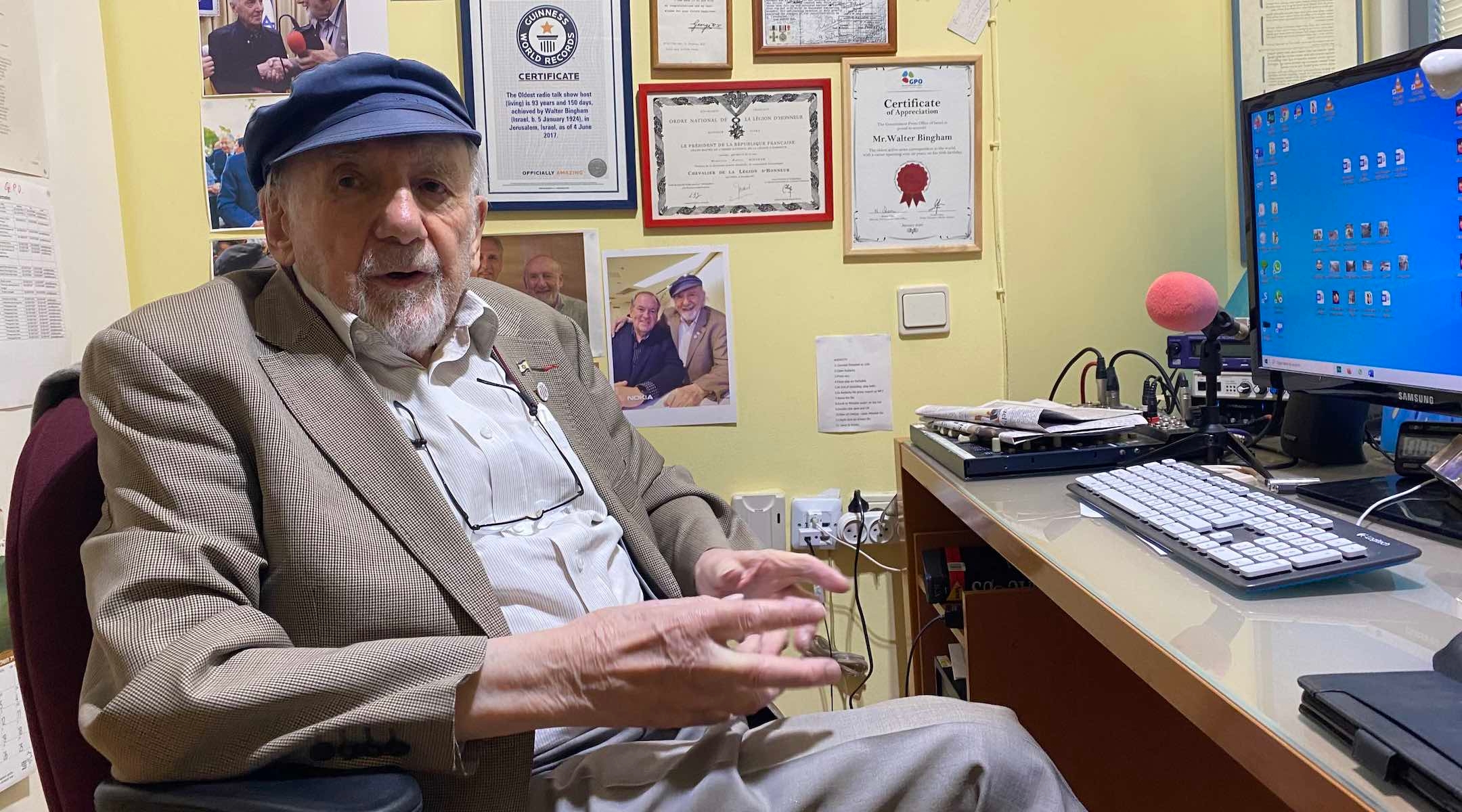 Walter Bingham, a 97-year-old radio journalist, sits in his office behind a wall filled with memorabilia, including a telegram regarding an award he won from the United Kingdom's King George VI. (Sam Sokol)
Advertisement

JERUSALEM (JTA) — When Walter Bingham moved to Israel following a long career as a host on British radio, he applied for a job at Kol Israel, one of the country’s leading broadcasters.

He came in for an interview but was rejected: At 80 years old, Bingham was told, he was past the station’s mandatory retirement age.

Other journalists might have retired. Bingham did not. The experience, he said, made him “realize this is a very ageist country.”

Seventeen years later, Bingham is still not retired. And this month, at age 97, he was certified by Guinness World Records as the world’s oldest working journalist.

“I actually feel quite young,” he told the Jewish Telegraphic Agency while sitting recently in his home office just steps away from downtown Jerusalem’s busy Hillel Street. “On a good day I feel like I’m 40; on a bad day 50.”

It’s the second such record for Bingham, a radio journalist who once was an actor and a model. In 2017, he was certified by Guinness as the “oldest radio talk show host” — the latest in a series of accolades that include a British military award for bravery during World War II and the French Légion d’honneur.

The host of the ongoing “Walter’s World” program on Israel National Radio, a right-wing news site based in the West Bank settlement of Beit El, Bingham has been a fixture at media tours, news conferences and other events across Israel since emigrating from London in 2004. Known for his signature blue breton cap, audio recorder and handgun kept in a holster on his hip, he is a familiar sight to members of the foreign media here, whose companionship Brigham cites as one of the reasons he feels so young.

“I have a lot of young friends,” he said. “And when I’m with them I actually feel young. The only time I realize that I’m old is when I pass a mirror.”

Born Wolfgang Billig in Weimar, Germany, in 1924, Bingham was a teenager when he was brought to England as a refugee, one of thousands saved as part of the Kindertransport effort to rescue Jewish children from Nazism. His father died in the Warsaw Ghetto. His mother survived, eventually joining him in England.

During the war, he joined the British Expeditionary Force and anglicized his name to Walter Bingham, so he would not be mistreated if captured by the Nazis. He served as an ambulance driver during the 1944 D-Day invasion, and that same year earned a citation for bravery: He rescued soldiers under withering enemy fire after the Germans had knocked out his ambulance, wounding his orderly and killing an officer.

Brigham, a native German speaker, was later transferred to intelligence, where he was involved in the initial interrogation of captured Germans. One he says was the Foreign Minister Joachim von Ribbentrop, who Bingham recalls denied knowing about the Final Solution. Bingham says he was “really a phony.” 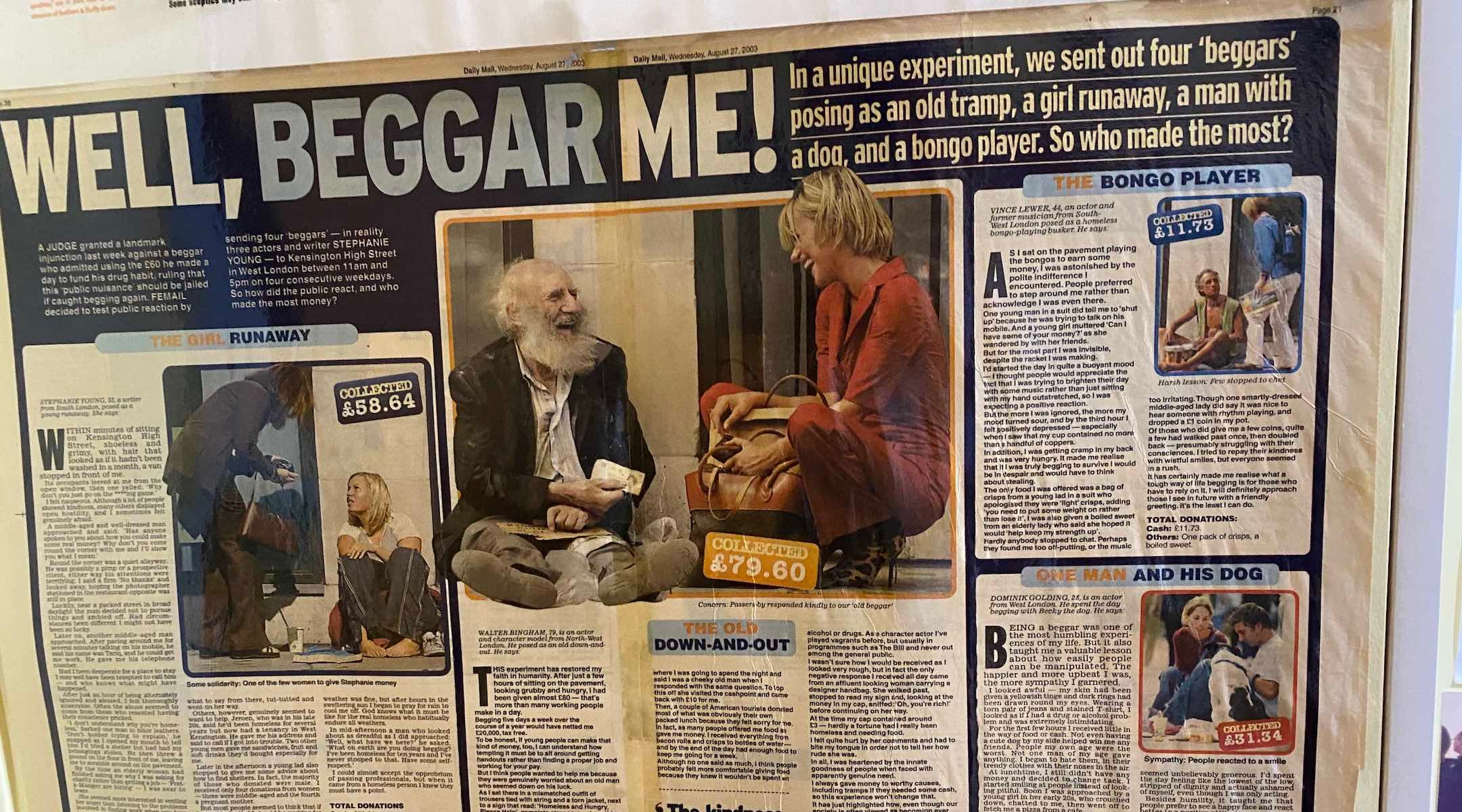 Bingham once impersonated a beggar on the street in London for a feature in the Daily Mail. (Sam Sokol)

Back in Britain after the war, he worked various jobs before answering a help wanted advertisement at a local radio station. His initial task answering the phones for a call-in show led to a series of “little jobs” before he eventually became a host for Jewish-themed programs on the London stations Spectrum and Sound Radio.

He also got degrees in philosophy and politics, and earned a pilot’s license.

To make some extra money, Bingham branched out into modeling and acting, he recalled, describing a series of jobs over the years that included playing Darwin in a documentary, a wizard in the background of two “Harry Potter” movies and Santa Claus at the Harrods department store.

He once pretended to be a homeless man begging on the street for a feature in the Daily Mail while a photographer hid in a nearby cafe. Like many of his other gigs, Bingham said he was given this job because of his large, bushy beard. That news article is now framed next to the door of his office alongside clippings of advertisements featuring his distinctive facial hair molded into outrageous styles. One for Virgin Cola features a sunglasses-clad Bingham with a forked beard.

Along the way, Bingham married and had a daughter, who is in her 70s and now also lives in Jerusalem. He also has two grandchildren and two great-grandchildren.

Bingham had always wanted to live in Israel, but his wife preferred to stay in London. She died in 1990, and in 2004, at the age of 80, Bingham made the move alone. Prior to arriving in Israel, he was contacted by Yishai Fleisher, who at the time hosted a show on Israel National Radio. Fleischer asked Bingham to document his preparations in an ongoing series of 10-minute daily spots. Bingham has also worked as a model. His bushy beard often helped him get jobs. (Sam Sokol)

After the turndown by Kol Israel, Bingham went to visit Fleischer in Beit El, where he was asked to continue his series of short spots, this time documenting his new life in Israel. Within weeks Bingham was offered his own program, which he works on from his office here. The show opens with the “Superman” theme song and introduces Bingham as “the doyen of the airwaves.” On a show in early January, he said his New Year’s resolution was to learn a few words of Hebrew every day.

Bingham’s office functions as a memorabilia room for his career of some 70 years. Its walls are covered with certificates of achievement, military awards, his Guinness records and pictures he’s taken with prominent figures such as Israeli President Reuven Rivlin and former Arkansas Gov. Mike Huckabee. The room is dominated by a massive desk where he edits and uploads his show.

Of course, the technology has changed significantly from when he began, Bingham said, describing once having to cut out sections of reel-to-reel tape and splice it back together with adhesive tape — a process that has been replaced with SD cards and audio-editing software.

But while the gear has evolved, the craft remains the same, he said, insisting that it is critical for young journalists to learn how to listen and not interject their own opinions into an interview.

“Often I see supposed interviews where the interviewer talks more than the interviewee,” he said. “Ask questions and let them answer fully. Don’t keep interrupting. If it’s prerecorded, you can always edit out parts [in which] you think the interviewee was going on for too long.” 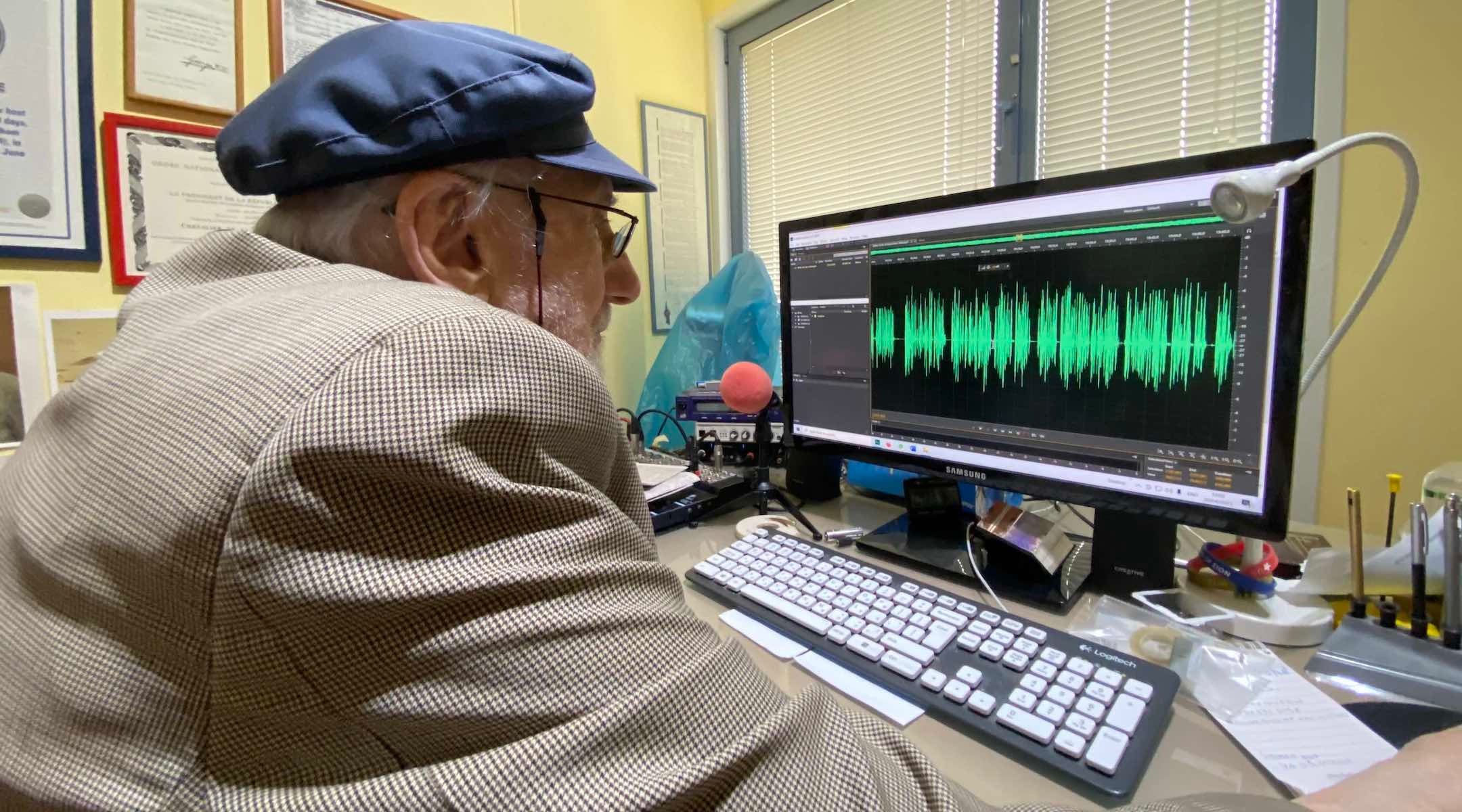 Radio technology has changed since Bingham began his career in the years following World War II, but he edits and uploads his own shows. (Sam Sokol)

While Bingham says that he is open about his opinions, he believes that many contemporary straight news reporters allow their unconscious biases to affect their work.

“Today it’s all opinions,” he said. “This is the main change that I see. When you read a newspaper it’s opinion, not the facts.”

Fleischer, now the spokesperson for the Jewish settlement in Hebron, still admires Bingham, telling JTA that he “has a unique tenacity for life and tenacity to get the story but also tenacity to live fully.”

Bingham, Fleisher said, brings a “tremendous amount of perspective of history and shows a lot of personal courage, and has a zest for life.”

Steve Linde, a longtime friend of Bingham and editor of the Jerusalem Report, wrote in an email that Bingham attaining the Guinness World Record is a testament to his persistence. He added that Bingham has a “wicked sense of humor.”

“What I admire most about him is that he never gives up,” Linde wrote. “I once asked him why he doesn’t use a walking stick, and he replied that if he starts using one, then he’ll always depend on it.  He’s fiercely independent and holds strong opinions on just about everything. But it’s his passion for life, people and the truth that are, perhaps, his most outstanding qualities.”

Does Bingham ever plan on retiring?

Before answering, he quips that he had to look up that word in the dictionary.