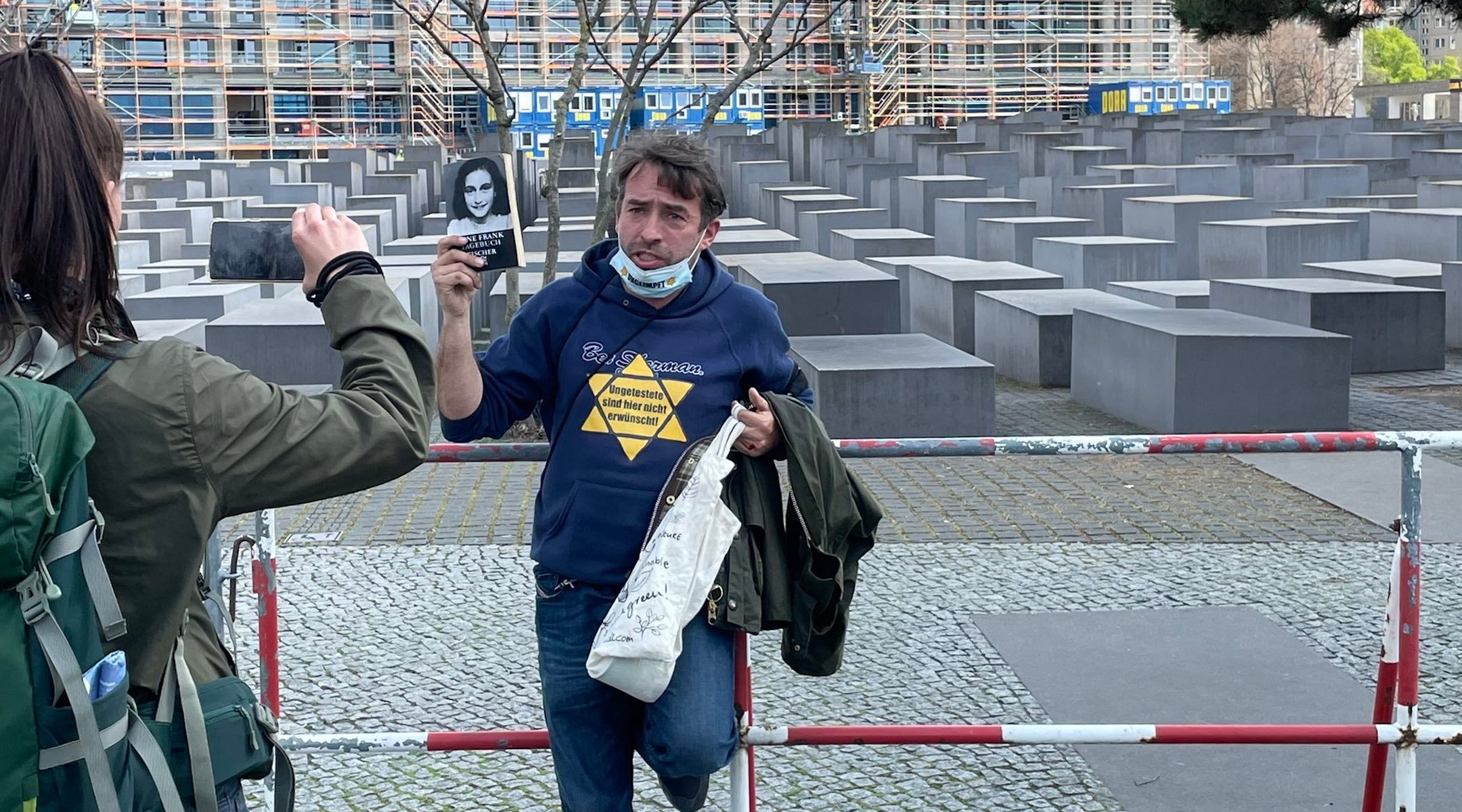 A man protests coronavirus restrictions with a yellow star and a photo of Anne Frank outside the Holocaust memorial in Berlin. (@ZSKberlin/Twitter)
Advertisement

BERLIN (JTA) – Germany’s antisemitism commissioner is urging a crackdown on protesters who don yellow stars to complain about the pandemic lockdown.

Speaking Friday, Felix Klein urged authorities across Germany to bar protesters from using the symbol, saying it relativizes the Holocaust. The Nazis forced Jews to wear a yellow Star of David as a means of humiliating them and marking them for further persecution, deportation and murder.

Some demonstrators have used the star, emblazoned with the words “non-vaccinated” in a Hebraicized script, to boost their claim of being persecuted for opposing coronavirus policies.

Germany does not require that citizens be vaccinated, but is offering to loosen social-distancing restrictions for those who get the shots.

“If people pin so-called Jewish stars on themselves … thereby drawing comparisons that relativize the Holocaust, then the means provided by law should be applied against them,” Klein told Germany’s Tagesspiegel newspaper.

While Holocaust denial is against the law in Germany, relativization skirts the legal boundaries. But it is important to ban this particular abuse of history, German political scientist and antisemitism expert Hajo Funke said in a telephone interview.

“If you combine the yellow star and ‘not vaccinated,’ this can easily be banned” in Germany, Funke told the Jewish Telegraphic Agency. But to ensure success in court, he said, “I would do it as an order of the police and the Ministry of the Interior,” and not as matter of national law.

For example, “I would advise the president of the police in Berlin to forbid the wearing of the yellow star in that kind of demonstration, full stop.”

Klein first raised the issue of a ban last year, and Jewish leaders have been supportive.

Munich banned the practice in June, and Wiesbaden followed suit in July. Wiesbaden Mayor Oliver Franz said at the time that the comparison relativized the Nazi crimes “in an absolutely intolerable way.”

It goes beyond the yellow star: Demonstrators have compared themselves to Sophie Scholl and other executed members of the German White Rose resistance group, as well as to Anne Frank, the Jewish teenager who died in the Bergen-Belsen concentration camp. Her diary, published after the war, made her a Holocaust icon.

The abuse of these symbols of resistance and suffering “is all the same shit,” Funke said. “To put it more diplomatically, it is utterly historically wrong.”

It is fair to protest government measures, he added, but “they cannot pretend they are in the resistance or they are persecuted compared to the Jews in the Nazi period — not at all. It is dangerous.”