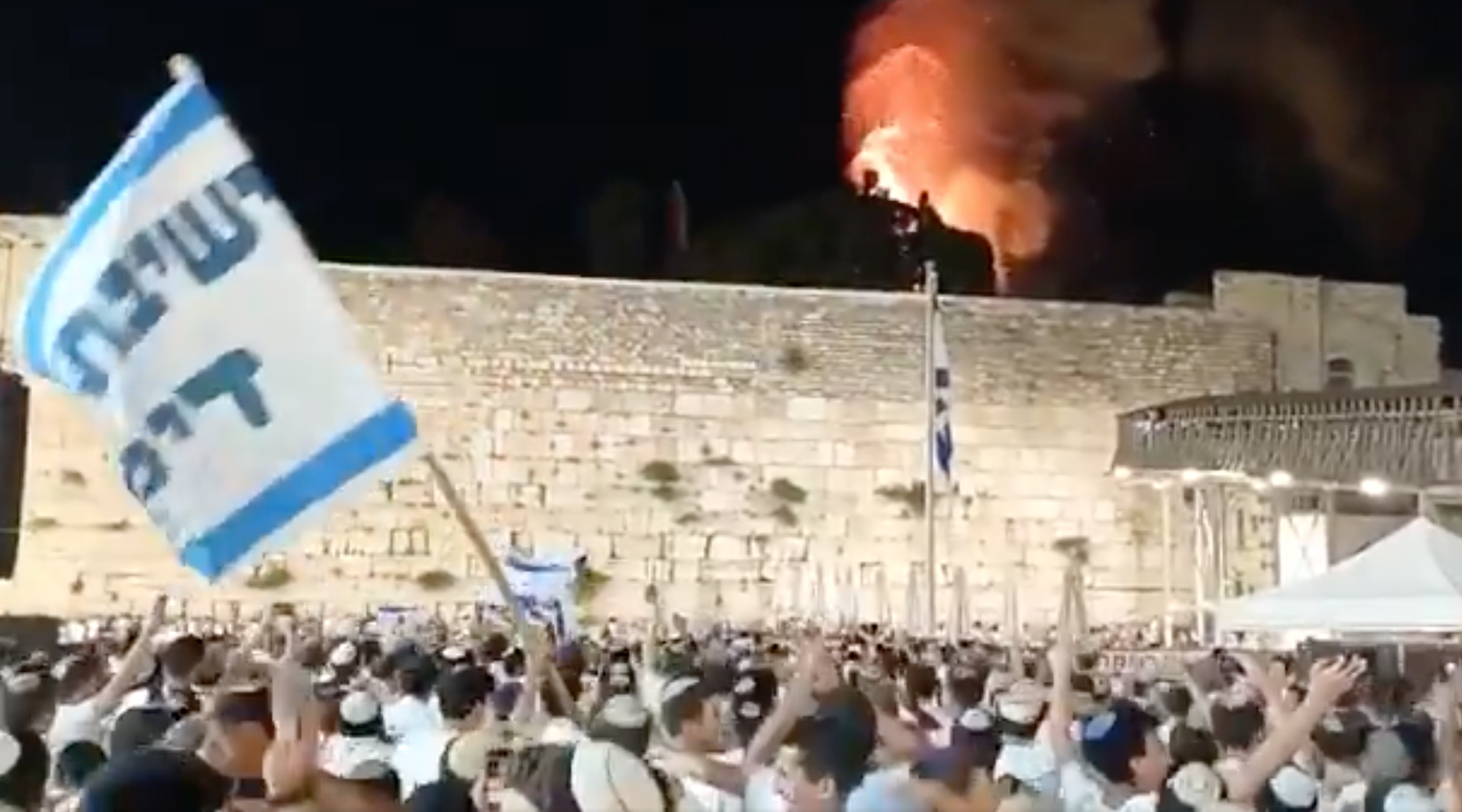 A video of Israeli men at the Western Wall singing and dancing as they watched a fire burn outside the Al-Aqsa Mosque has gone viral during the conflict. (Screen shot)
Advertisement

(JTA) — For some Americans watching the escalating violence in Israel and Gaza in recent days, the most striking image from the conflict came in a video of Israeli men at the Western Wall, singing and dancing as they watched a fire burn outside the Al-Aqsa Mosque.

Others can’t look away from videos of Iron Dome, Israel’s missile defense system, which shoots rockets out of the air mid-flight, lighting up Israel’s skies like a fireworks display.

Both images have gone viral as Israel and Gaza descend into the most intense exchange of rocket fire since 2014.

As in past conflicts between Israel and Gaza, social media has emerged as a battleground, far from the actual fighting, for activists on both sides to trumpet their opinions. But perhaps more than in any previous conflagration with Gaza, social media has enabled those outside of the region to see what’s happening almost in real-time. And activists across the spectrum have recognized the power these images have to shape the narrative on the ground.

Pro-Palestinian activists say the social media posts are making their cause more visible. Tasha Kaminsky, a nonprofit consultant and frequent Twitter user, said the videos make it harder to look away from the costs of what’s happening to Israelis and Palestinians. Kaminsky’s current name on Twitter is “#SaveSheikhJarrah,” a hashtag used by pro-Palestinian activists protesting the potential eviction of Palestinians from a neighborhood in East Jerusalem.

“It’s one thing to read a story…but to see it is a very different experience,” she said. She pointed to the “availability of video in a way that’s so easy to consume and the immediacy of seeing that in real-time” as something that made the conflict’s costs more apparent.

Yonah Lieberman, a co-founder of the Jewish activist group IfNotNow, which was formed during the 2014 Gaza war to protest Israeli government actions, also notes the growing role of social media in the conflict. Videos like the one of the fire on the Temple Mount help expose a tendency in the media, he said, to say “both sides are equal.”

To Sara Hirschhorn, a visiting professor of Israel Studies at Northwestern University, the video of the fire showed the limitations of social media. She felt it suggested that the men at the Western Wall were responsible for setting the fire, even though Israeli police said it was started by fireworks lit by Palestinians and burnt a tree, not the mosque.

“That’s sort of an act of disinformation that is troubling. It’s being tweeted as, ‘Here are ultra-nationalist Jews jumping up and down and dancing and singing as Al-Aqsa burns in the background,’ and it’s not what’s happening in that photo,” she said.

From his home in Jerusalem, Avi Mayer, a prominent pro-Israel advocate on Twitter, agreed that social media was playing a more important role than ever in helping people outside of the conflict see what was happening.

He pointed to social media posts about an Israeli driver who hit a Palestinian on the sidewalk outside the Old City of Jerusalem. Security footage released later showed protesters pelting the car with rocks before the car ran onto the sidewalk and hit the Palestinian. The Israeli driver was also injured in the incident and was interviewed by Israeli media with a bandage on his head and a bloodstained shirt. Mayer felt such videos provided necessary context.

“I actually think that is a benefit that we have that we didn’t have previously,” said Mayer, who is managing director of global communications for the American Jewish Committee.

But he also worried that people might take the wrong lessons from the videos of Israel’s Iron Dome system successfully shooting down rockets coming from Gaza. The videos could lead viewers to believe that Israel was not at risk of serious harm from the rockets. One video that emerged, for example, shows Iron Dome’s fireworks-like display set to the Star Wars theme song.

Only the Star Wars soundtrack does justice to the missile battle over the skies of Israel. https://t.co/aQTFc9HDnk

“It sometimes paints a misleading picture,” Mayer said of the Iron Dome. “It’s not a panacea. Quite a few rockets have managed to get through the system.”

Some footage “has not been interpreted in the way that Israeli hasbara has hoped,” Hirschhorn said, referring to pro-Israel activists. But she added that people should focus their attention on the actual war — not on the Twitter battles it has inspired.

“There are no stakes to be had on social media,” she said. “The stakes are for people in their bomb shelters tonight or who lack one on the Palestinian side.”