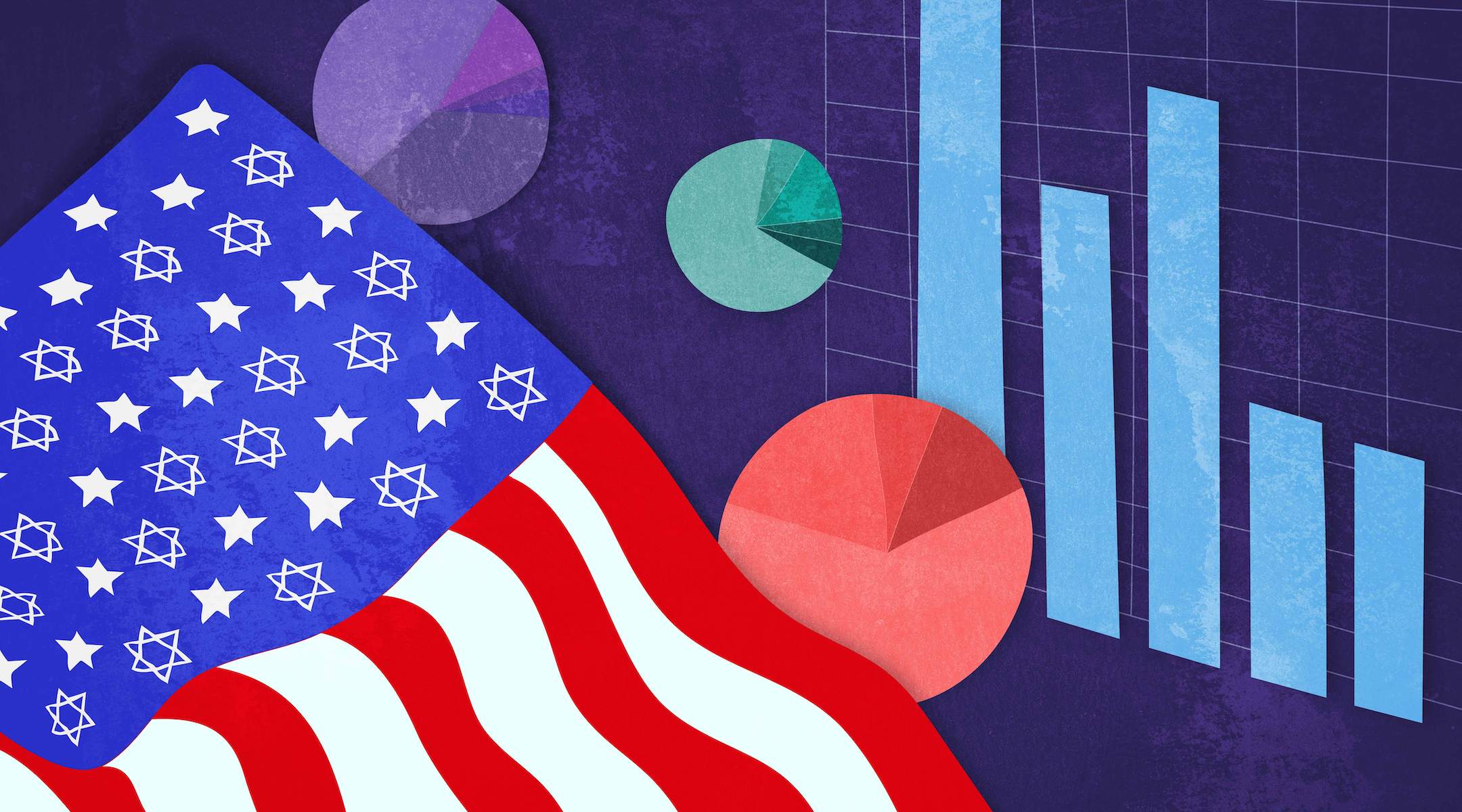 (JTA) — Meet America’s Jews: They’re older, more educated, richer and less religious, on average, than the rest of the country.

They’re overwhelmingly white, though Jews under 30 are more diverse. Most of them care about Israel, though one in 10 support the movement to boycott it. Most of their young adults are marrying non-Jews, though the growing Orthodox community is not.

Those are some of the many findings of a study on Jewish Americans published Tuesday by the Pew Research Center. It’s the second edition of a landmark 2013 study that changed the American Jewish conversation.

The 2013 survey measured not only the size and makeup of American Jewry, but quantified what those Jews believed (or didn’t), how they practiced their religion (or didn’t), whom they married, how they raised their children and how they felt about Israel.

The “Pew study,” as it came to be known in Jewish organizational circles, reflected the current state of American Judaism and influenced what Jewish nonprofits did and how they spent their money. Jewish leaders and pundits marshaled its data to buttress their arguments and advance their vision of what the Jewish community should look like.

The new edition asks many of the same questions, and adds a few new ones based on the events and conversation of the past few years. For example, the survey delves much deeper into antisemitism, as well as racial and ethnic diversity among American Jews.

If this year is anything like 2013, the response will be reams written (including by the Jewish Telegraphic Agency) about what this Pew study means. Meanwhile, its authors have cautioned not to make direct comparisons between the data in the two surveys because of differences in methodology.

But here are the basics: The American Jewish community is growing and increasingly diverse. It is largely educated, affluent and leans Democratic. Most of its young people are marrying non-Jews, though many of those families are still raising their kids Jewish.

Orthodox Jewry is growing and the Conservative movement is shrinking. The more traditionally observant Jews are, the more likely they are to consume Jewish culture. 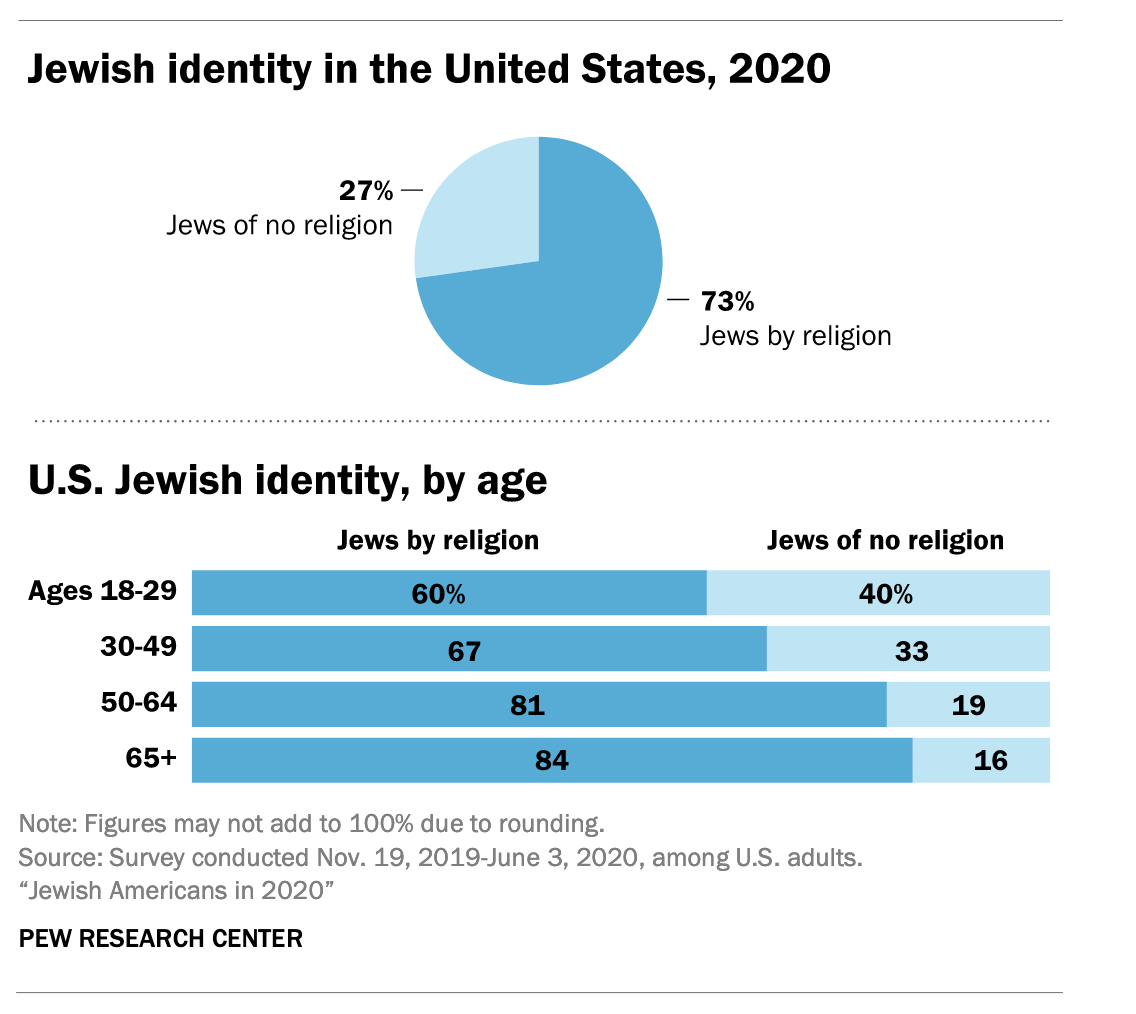 The number includes approximately 5.8 million adults and 1.8 million children. About 4.2 million of the adults identify their religion as Jewish, while the rest of the adults are what Pew calls “Jews of no religion.”

The 7.5 million figure is up from the 6.7 million counted in 2013, which included some 5.3 million adults and 1.3 million children. And the 2021 figure is a bit larger than the Jewish population of Israel, which is around 6.9 million.

Jews make up about 2.5% of the American population. They are slightly older than Americans overall, with a median age of 49 compared to the overall median American age of 46.

2. Most young Jews are either Orthodox or unaffiliated.

The future of American Jewry appears to be one of polarization. The numbers of Orthodox and unaffiliated Jews are growing. The Conservative and Reform movements, which once claimed the bulk of the American Jewish community, are shrinking.

Overall, the raw percentages belonging to each denomination haven’t changed much since 2013. But religious affiliation by age shows a changing community.

The survey adds to a discussion that the Jewish community has been having in recent years: What proportion of American Jews are Jews of color, and have Jews of color been undercounted as a result of institutional bias? That conversation grew more intense during and after the protests over racial injustice that began last year.

The survey did not ask about the term “Jews of color” specifically because of debates over its definition and researchers were concerned that respondents may not be familiar with it. But the survey aimed to measure the racial and ethnic diversity of American Jewry.

And while most American Jews were born in the U.S. and identify as Ashkenazi (with roots primarily in Eastern Europe), those numbers drop among young adults as well. Among those under 30, 28% are either not Ashkenazi, identify with at least one racial minority or are the children of immigrants from countries with a largely nonwhite population.

Overall, two-thirds of Jews identify as Ashkenazi, while only 3% identify as Sephardic, or following the traditional religious Jewish customs of Spain, according to Pew. Another 1% identify as Mizrahi, a term primarily used in Israel that refers to Jews with roots in the Middle East and North Africa.

4. Some 10% of Jews support the boycott of Israel — but half of young adults haven’t heard much about it.

But the survey also found that the Palestinian-led Boycott, Divestment and Sanctions movement against Israel, or BDS, has made inroads into the American Jewish community. One in 10 American Jews — and a slightly higher proportion of young adults — said they either “strongly support” or “somewhat support” the BDS movement. Some 43% of Jews oppose BDS, and another 43% haven’t heard much about it.

(The survey did not define BDS — due to debates over its scope and aims — but instead asked people how much they had heard about it. Only those who had heard “some” or “a lot” were then asked if they supported or opposed the movement.)

In that vein, the survey found that college campuses appear to be far from the hotbeds of BDS support that some have warned. While Jewish organizations have fretted about BDS activism on campus for over a decade, the survey found that nearly half of Jewish adults under 30 had heard little or nothing about the boycott movement. 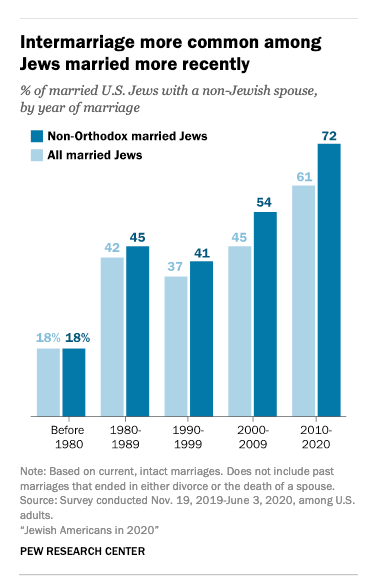 5. Most young Jews are still intermarrying.

For organizations that are invested in “Jewish continuity” (or, in plain English, urging Jews to marry Jews and have Jewish babies), the 2013 Pew study was a red flag. It found that the majority of Jews who married after 2000 wed non-Jews. When it came to non-Orthodox Jews, the numbers were even higher.

The same is true of the 2021 study, though researchers say the numbers haven’t shown meaningful growth. In other words, plenty of young Jews are still intermarrying, but the number isn’t much bigger than it was in 2013. Due to changes in methodology and small sample sizes, the researchers emphasize that it’s unwise to compare results between the two surveys.

The 2021 study found that in the past decade, 61% of Jews married non-Jewish partners. And nearly three-quarters of non-Orthodox Jews who married since 2010 wed non-Jews. Intermarriage is quite rare among Orthodox Jews.

In total, 42% of married Jews have a spouse who is not Jewish. 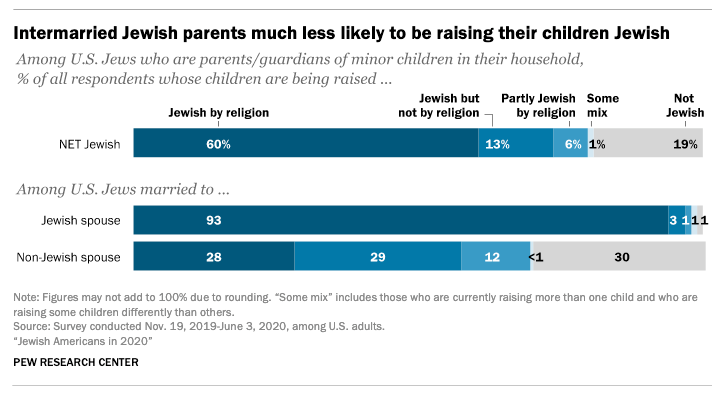 6. But among young adult children of intermarriage, nearly half are still Jewish.

Among adult children of intermarriage, the study found that younger adults are more likely to be Jewish than older adults. Only 21% of adults over 50 with one Jewish parent identify as Jewish, as opposed to 47% of those under 50. The finding led the researchers to conclude that “the share of the offspring of intermarriages who choose to be Jewish in adulthood seems to be rising.”

Across the survey’s respondents, preventing intermarriage is not a high priority. For every age group, the respondents said it was more important that their grandchildren share their political convictions than that they marry a Jewish partner.

7. Most Jews have experienced antisemitism in the past year.

Like a range of other recent surveys, this one asked Jews about antisemitism — something that was largely absent from the 2013 study. This one said that in the wake of antisemitic events from the Charlottesville neo-Nazi rally in 2017 to the deadly attacks on Jews in Pittsburgh in 2018 and Poway, California, in 2019, antisemitism appears to be a larger part of American Jewish life now than it was at that time.

Like other studies, the 2021 Pew survey found that most Jews believe antisemitism in America has increased in recent years and said they feel less safe now than they once did. Five percent of American Jews said they have stayed away from a Jewish event or observance because of safety concerns.

Over the past 12 months, the survey found, 51% of Jews have experienced antisemitism — either by seeing anti-Jewish graffiti, being harassed online, being physically attacked or through another form of discrimination.

8. Jews are wealthier and more educated than Americans overall.

In line with other recent studies, this one found that American Jews are significantly more educated than Americans overall, and wealthier. The majority of Jews have a college or postgraduate degree, as opposed to fewer than 30% of Americans overall.

Orthodox Jews appear to have a tougher time financially. Among Orthodox Jews, 45% reported having trouble paying bills over the past year, compared to just 26% of Jews overall.

9. More than three-quarters of American Jews say remembering the Holocaust is essential to being Jewish.

While the survey highlighted differences across American Jewry, the survey found that the vast majority of Jews, 76%, believe remembering the Holocaust is essential to being Jewish. A similar number said the same of leading an ethical and moral life.

At the other end of the spectrum, just 15% of Jews said observing Jewish law is essential to being Jewish, and 33% said being part of a Jewish community was essential.

Among Orthodox respondents, though, the numbers were different: 83% called observing Jewish law essential, and 69% said the same about being part of a Jewish community. Slightly over half of Orthodox Jews said remembering the Holocaust was essential to being Jewish.

Holocaust remembrance was also a lower priority among young adults — although it was still high. Sixty-one percent of respondents under 30 said it was essential to being Jewish.

The survey was mainly conducted prior to the pandemic, so its findings were not intended to reflect changes in practice or attitudes that were introduced during it. But the report included details from follow-up interviews that quantify something that is conventional wisdom for many Jews: Relative to Americans as a whole, Jews were hit early in the pandemic.

Jewish areas of Westchester County, in suburban New York City, were an early COVID-19 hotspot, and haredi Orthodox communities in Brooklyn suffered painful losses from the disease last spring. Pew’s numbers bear this out: In August, 10% of “Jews by religion” had tested positive for either COVID or antibodies, compared to 3% of Americans overall. And 57% of Jews knew someone who was hospitalized or died from COVID, as opposed to 39% of Americans overall.

But by February 2021, as the coronavirus circulated widely in the United States, gaps between non-Jews and Jews had narrowed. “Jews by religion” were still about twice as likely to have tested positive as Americans overall — 23% to 11%. But among both groups, a little more than two-thirds knew someone who was hospitalized or died from COVID.