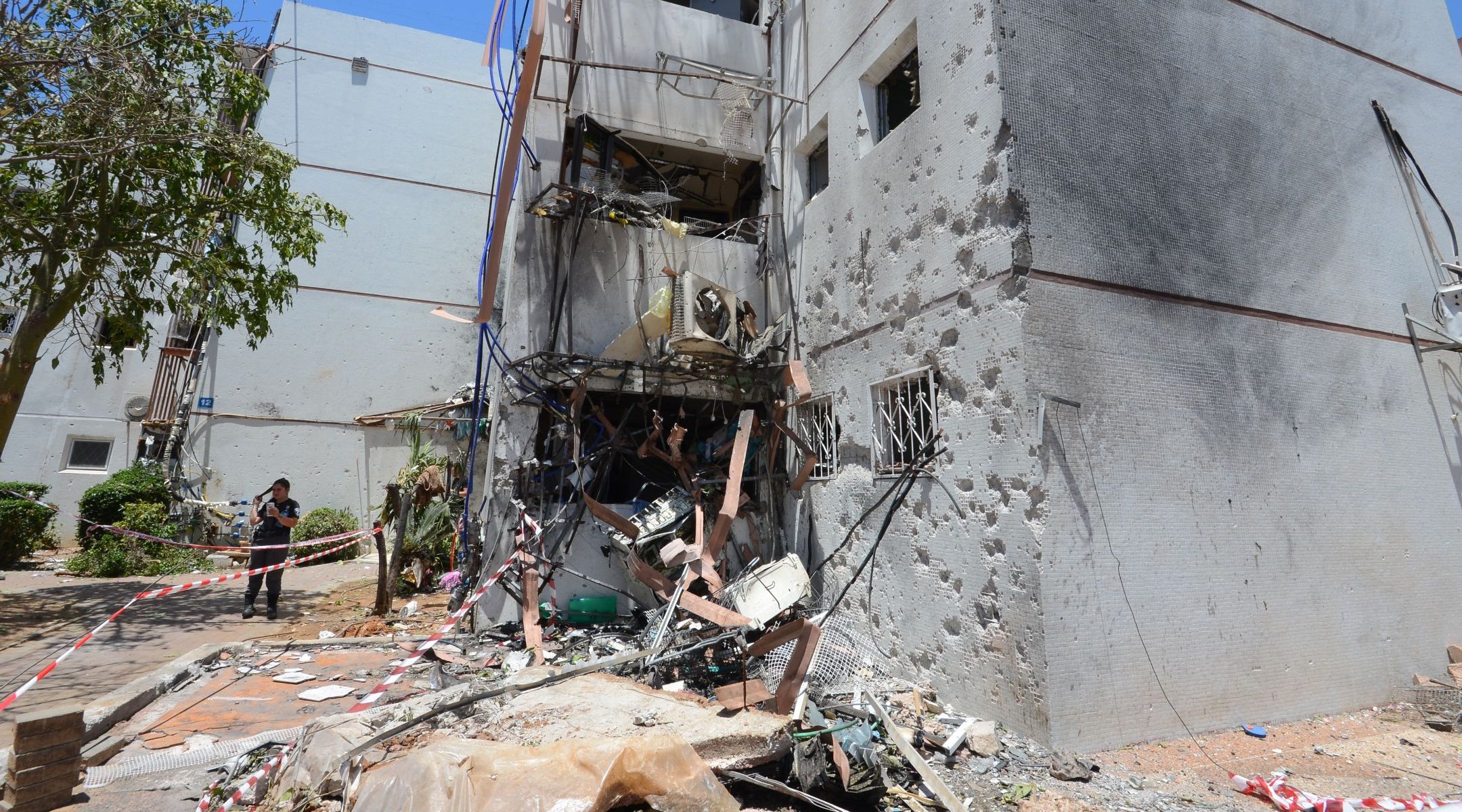 People seen at their home that was hit yesterday by a rocket fired from the Gaza Strip, in the southern Israeli city of Ashdod, on May 18, 2021. (Avi Roccah/Flash90)
Advertisement

(JTA) — President Joe Biden “expressed support for a ceasefire,” the White House said, as fighting continued and the number of Gaza Palestinians killed topped 200, along with 12 people killed in Israel.

Efforts toward a ceasefire may be gaining steam. According to Israeli media, the sides may reach a truce “within days,” possibly mediated by Egypt, which has brokered previous indirect talks between Israel and Hamas.

Israeli officials were in their public statements showing no sign of backing down. Benny Gantz, the defense minister, said every member of Hamas in the Gaza Strip, should consider himself vulnerable.

“We have a bank of targets that is full and we want to continue to create pressure on Hamas,” Kann Israel Radio quoted the army spokesman, Hidai Zilberman, as saying.

Biden’s language signaled that he may be ready to increase pressure on Israel to bring the war to a conclusion. “He encouraged Israel to make every effort to ensure the protection of innocent civilians,” said the White House statement describing the call. “The two leaders discussed progress in Israel’s military operations against Hamas and other terrorist groups in Gaza. The President expressed his support for a ceasefire and discussed U.S. engagement with Egypt and other partners towards that end.”

Biden so far has used the U.S. veto to keep the U.S. Security Council from considering the fighting.

The Health Ministry in the Gaza Strip said that 213 people had been killed since hostilities erupted on May 10, including 61 children. It’s not clear how many deaths are the result of Israeli missile attacks on the strip and how many are the result of rockets fired by Hamas and other militant groups falling short. So far, rocket fire from Gaza has killed at least 12 people in Israel, with most of the thousands of rockets fired intercepted by the Iron Dome missile defense system.

Fighting resumed midday after a lull of several hours to allow the transfer to Gaza of fuel for humanitarian reasons. A rocket hit inside Israel near Gaza’s border killed at least two Thai agricultural workers, bringing Israel’s casualties to 12.

Sirens sounded across southern Israel, including Beersheba, Ashkelon, and Ashdod, and residents were instructed to enter bomb shelters.

Earlier on Tuesday, a key congressional committee had considered asking Biden to delay the process of transferring more than $700 million in precision-guided missiles to Israel, which would be the first time in the history of the U.S.-Israel relationship that Congress pressured the president to restrain Israel instead of giving it freer rein. But Rep. Gregory Meeks, D-N.Y., the chairman of the U.S. House of Representatives Foreign Affairs Committee, later abandoned the push for a delay to the transfer.

Meeks replaced Eliot Engel, one of Congress’s most pro-Israel stalwarts who was ousted last year in a primary, as chairman. Progressives who are now among the most critical of Israel’s actions backed Engel’s primary challenger, Jamaal Bowman, who went on to win, but Meeks was considered a centrist and went out of his way last year during jostling to replace Engel as chairman to reassure pro-Israel groups that he would never touch assistance to Israel.

The latest round of fighting however has triggered tectonic shifts in how Congressional Democrats relate to Israel, with party members last Thursday exchanging impassioned speeches over which side was more to blame in the conflict.

Ominously for the centrist pro-Israel community, which has counted on Jewish lawmakers to be its first line of access in Congress, it has been Jewish members who have led calls for a cease-fire. Sen. Jon Ossoff, a Jewish freshman Democrat from Georgia, led a call by 28 Democrats in the senate for a Ceasefire, and 12 of the 25 Jewish Democrats in the House signed a letter to urge an “immediate ceasefire.” Notable among its signatories were Jerry Nadler of New York and David Cicilline of Rhode Island, who have until now been stalwarts of the centrist pro-Israel lobby.

A number of Jewish Democrats in the House have remained outspoken in their defense of Israel, including Kathy Manning of North Carolina, Elaine Luria of Virginia and Ted Deutch of Florida. “We must say unequivocally that there is no place on earth where a terrorist group firing hundreds of rockets on innocent civilians should be defended or its actions justified,” Deutch told the World Jewish Congress last week. “Not if human rights matter to us.”

The recent fighting was launched by Hamas with its rocket attacks. It was preceded by clashes in Jerusalem over planned Israeli government evictions of Palestinian families from a Jerusalem neighborhood and by restrictions of access to Palestinian worshippers.