‘Not good for my mental health’: Jewish Instagrammers struggle amid Israel-Gaza conflict and antisemitic violence 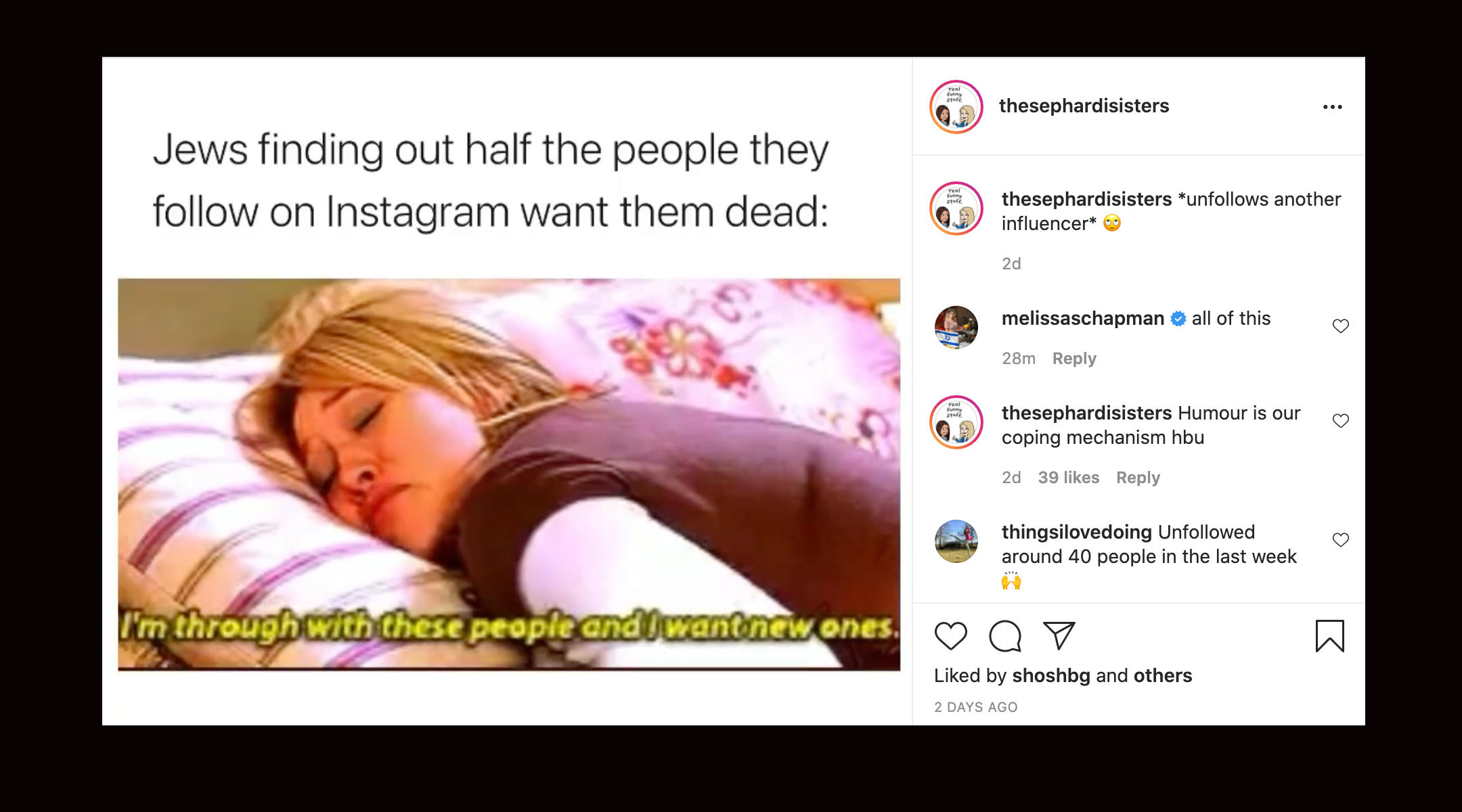 Jewish influencers and users of Instagram, the visual social networking app that is widely used for activism, say it became a challenging place during the recent Israeli-Palestinian conflict. (Screenshot)
Advertisement

(JTA) — Ilyssa Minkus usually spends a chunk of her day on Instagram. That’s where she promotes her business producing party decorations and Jewish-themed crafts.

But after Israel began trading bombs with Hamas in Gaza last week, she tried — often without succeeding — to stay away.

“I don’t want to go on because I’m just bombarded with anti-Israel message after anti-Israel message,” Minkus said a week into the latest conflict. “I felt so differently when the [Jan. 6] attack on the Capitol happened and when influencers were not addressing the issue. But this is something where I am holding my breath when somebody I like posts something.”

At one point, an influencer Minkus admires posted a video titled “Gaza is Under Attack.” Minkus reached out to let her know that the post felt one-sided and didn’t acknowledge the role that Gaza’s leadership had played in instigating the bombing.

Minkus, who lives in Chicago, wasn’t the only person to reach out: The influencer took down the video, saying that while she thought the post was clear and unbiased, she had heard from many people who disagreed.

Minkus felt relieved that her advocacy had worked — but then she looked around and across her feed saw post after post that felt similarly slanted, or worse. She didn’t reach out to anyone else.

“It’s not good for my mental health,” she said. “I worry that I won’t have the correct answers to rebut what somebody says. And that makes me anxious.”

Minkus’s calculation was one that Jews on social media have made countless times over the past two weeks as an explosion of tensions thrust the Israeli-Palestinian conflict into international headlines. Influencers who are not Jewish or Palestinian and more often post about parenting, pop culture or their personal lives have posted about the conflict, sometimes sharing misinformation, while prominent Jewish account operators have waded into the conflict, sometimes with hesitation — and sometimes received antisemitic comments in response. Meanwhile, their followers have found themselves having to weigh the costs and benefits of taking a stand or combating misinformation on an incredibly fraught topic.

And now, with a ceasefire in place but antisemitic incidents cropping up across America, Jews on social media fear their decisions are becoming even higher-stakes.

“It’s important for people to know how exhausting and draining and soul-destroying it is to be constantly advocating for your right to exist, and your children’s right to exist and their physical, and your physical, safety, with this torrent of people who don’t understand the ways they’re inciting violence because they feel like they have to make a statement about things they don’t know anything about,” said Meg Keene, a Jewish businesswoman in Oakland, California, who frequently shares information about Judaism and Israel with the 6,600 followers on her personal Instagram account.

“The only way I can keep it together is I won’t do one to one,” Keene said. “I won’t fight in the comments or DM people and say this is why you are wrong. I think this is useless and draining.”

The anxieties are most pronounced on Instagram, the social photo app owned by Facebook that emerged as a hotbed of activism in the past year and is widely used by women. During the racial justice protests following the murder of George Floyd, Instagram slideshows that drew on corporate aesthetics became a dominant tool for conveying information — and sharing them became a signifier for allyship.

That style has now become ubiquitous, and over the past two weeks influencers, advocates, news organizations and just regular Instagrammers have flooded the app with memes and slides about the Israeli-Palestinian conflict. In one prominent example, model Bella Hadid shared a graphic that featured two women, one of whom asks, “So aren’t Israelis and Palestinians just fighting over religion?” The other woman responds: “They are not ‘fighting,’ Israelis are the oppressors and Palestinians are the oppressed and the situation is about anything but religion.” That post spawned a trove of parodies representing every conceivable ideological position on the conflict and region.

Instagram’s potency is also a liability, writes Emily Burack in an Alma essay titled “So you want to post about Israel and Palestine on Instagram.” Burack argues that many users trust content just because it is aesthetically pleasing and shareable, even when it is false, and that small images — even a series of them — are inadequate to summarize what’s going on in the Middle East.

“When it comes to one of the most fraught and complex conflicts in the world, which has been unfolding over the course of thousands of years, an infographic alone is just not going to cut it,” she writes.

Burack advises to use Instagram as a starting point for learning, not the only source of information.

That may not be practical for many people, especially those who may not be passionate or informed about the Middle East but might feel pressure to take a stand nonetheless — such as the influencer Maya Zemel reached out to this week.

Zemel, a Los Angeles occupational therapist who typically follows parenting accounts, was unsettled by a post she saw from an influencer with more than 200,000 followers. A white woman who posted extensively about how to diversify a home library and raise anti-racist children a year ago, the influencer shared information about how to help Palestinian children.

The daughter of Israeli immigrants, Zemel thought of her relatives huddling in bomb shelters in Israel and sent a message encouraging the account’s operator to include Israeli children in future posts about the conflict. The response surprised her.

Some Instagram users have resisted the pressure to post about the Israeli-Palestinian conflict. Last week, for example, Jake Cohen, a Jewish food blogger, posted a message telling his 345,000 followers that they would have to go elsewhere for posts about the conflict.

But many others have weighed in despite not previously engaging on the issue. Whitney Fisch, a longtime Instagram influencer who posts about Jewish food and parenting, said she attributed the flurry of misinformation to people wanting to take as strong a stand now as they did last year about racial justice but not understanding the unique context of the Israeli-Palestinian conflict.

“It is more important to so many people that they appear to be active and liberal and educated as they made their persona online to be,” Fisch said. “That’s more important than doing the research and supporting a Jewish community. That’s my theory.”

Fisch, the executive director of the Hillel at Miami University in Ohio, said she had not observed bullying or conflict related to Israel on campus in recent weeks. But her Instagram feed showed a different story.

After a friend posted a video from a pro-Palestinian march with a caption that included the words “From the river to the sea,” Fisch reached out to let her know that the phrase is painful to many Jews, who understand it as a rallying cry for those who want Israel not to exist at all. Fisch said her friend was apologetic that she had amplified something she didn’t understand.

“But the thing that killed me is I’m preaching to the choir,” she said. Like Minkus, Fisch was dismayed about her limited impact and how many other ideas were circulating that she had no power to counter. “I just need someone to call out Hamas. Anyone.”

Keene, too, said she had been inspired in part because of the undertones she saw in some pro-Palestinian content that entered her feed. She said she saw herself as a bit of an unlikely Instagram advocate for Israel, since she is a progressive on most issues and has always belonged to liberal synagogues where members are attuned to the plight of Palestinians. But Keene said the misinformation she had encountered had unnerved her.

“The way I have seen the left online in the last week is not dissimilar to the way the right has behaved around QAnon,” Keene said. “The left is passing along misinformation graphics, all but quoting Hamas talking points.”

Instead of battling other influencers, Keene has been producing content of her own, adding her own insights to slides produced by a handful of other accounts she trusts. She has been active on social media for well over a decade. So she has developed a thick skin: Unlike some less seasoned influencers she knows, Keene doesn’t check the messages that roll in from people she isn’t already in touch with — she knows they are likely to include antisemitism and doesn’t want to see it.

“More women than not are thinking I can’t do this right now, I can’t do this anymore,” Keene said. But, she said, “I’m built for this. It’s miserable but someone has to do the work. There are a handful of us and we’re leaning on each other.”

Keene said she knows that she has helped some Instagram users feel more informed about Judaism and Israel issues because they have told her so. But she also said what she sees is often dispiriting.

For some, the response to seeing slanted or uninformed Instagram posts about the Israeli-Palestinian conflict is to unfollow, or tell the app not to show new posts from the people who created them.

The Sephardi Sisters, a Jewish account that does not typically engage heavily in Israel issues, posted a meme on Wednesday that took aim at the dynamic. Above a gif of Jennifer Aniston of “Friends” fame saying “I’m through with these people and I want new ones” were the words “Jews finding out half the people they follow on Instagram want them dead.”

In the comments, followers shared how many people they had unfollowed this week: 20, one person posted. Another counted 40; another yet 50.

“Heart is broken,” one commenter wrote, saying that it had hurt to see misinformation shared by “women and artists I looked up to and admired.”

But some say they feel that disengaging represents a form of concession — even if remaining engaged comes at significant personal cost.

“It almost feels like my responsibility to be vigilant,” said Zemel, the Los Angeles woman who took the uncharacteristic step of reaching out to an influencer this week. “I also feel completely helpless. It feels exhausting to know what to say.”