Superman taught me how to be a Cuban Jew 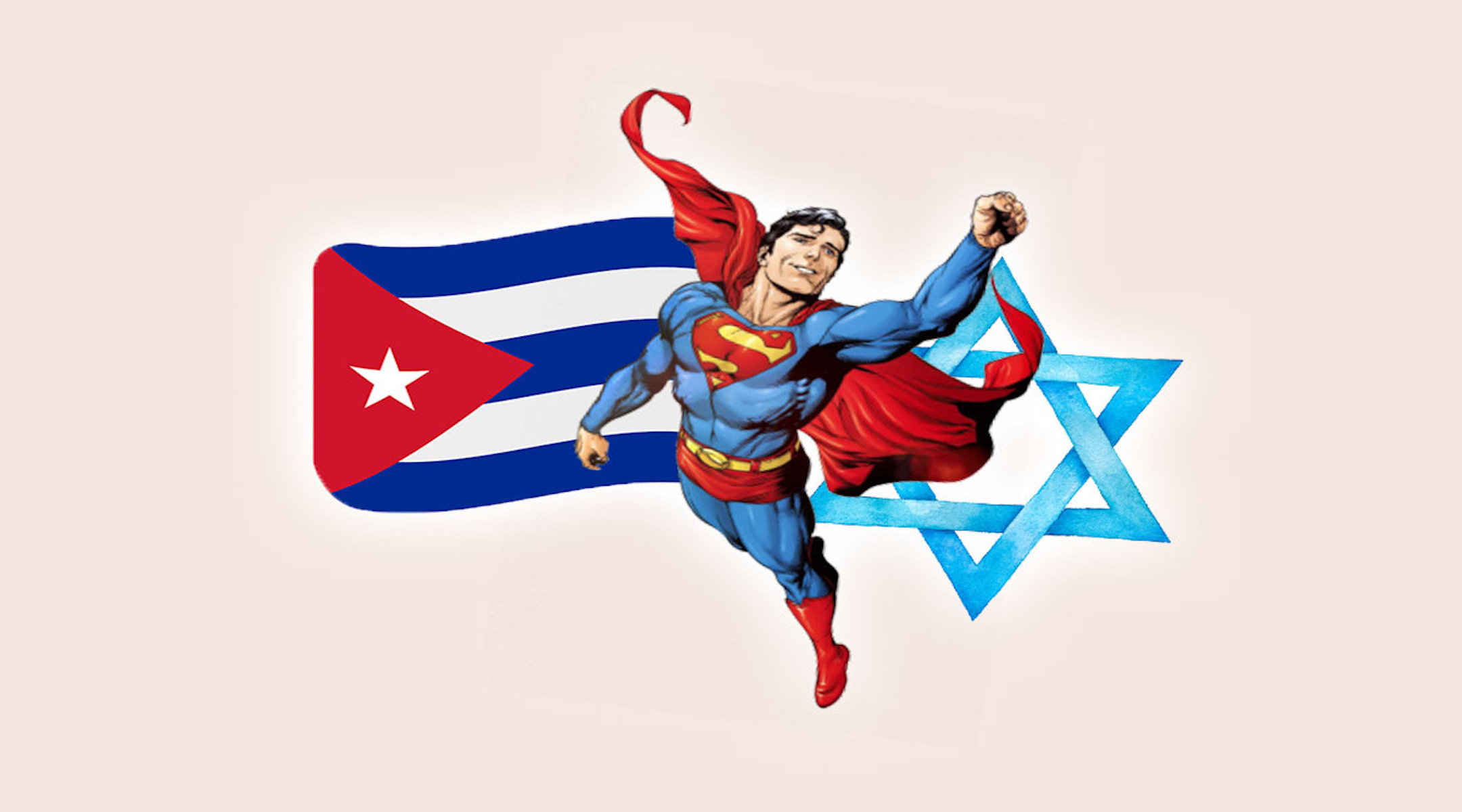 I was Jewish to everyone but the Jews.

That’s what it felt like to grow up the son of a Cuban mother and Jewish father. I looked exactly like my dad, with his curly hair and deep-set eyes, and I had his last name, Steinberg, stitched on the back of my baseball jerseys. But my Jewish friends and their parents ceaselessly reminded me that I was not really like him. Judaism comes from your mother, they said, so I couldn’t be Jewish. Isaac’s dad would have me over for dinner and have a laugh over my being “the fake Jew.” His wife would jokingly correct him, saying I was really more of a “half-Jew.” A lot of Jewish people seemed to agree: There weren’t any Cuban Jews.

Clark Kent thought he was just like any other kid in Smallville, Kansas, until someone told him otherwise. In 2009’s “Superman: Secret Origin,” a young Clark examines the spaceship he came to Earth in for the first time. The rocket projects a hologram of Clark’s birth parents and they tell him about his origins and the planet Krypton. They reveal that Clark was originally named Kal-El and remind him, “Although you look like one of them — you are not one of them.” There weren’t other kids in Smallville like Clark.

In 2021, I know there are other Cuban Jews like me, but I didn’t know that when I was a kid. Speaking Spanish at home with my mom and having the rice and beans she prepared for every other meal was all it took to alienate me from my peers. I laughed when my friends joked about not being able to understand my mom because of her accent, even though I couldn’t hear it myself.

When Clark Kent was a kid, he accidentally broke his friend’s arm while playing football and started a fire at school with an unexpected blast of heat vision. Clark’s adoptive parents tried their best, but they could never quite grasp their son’s alien experience. Similarly, my parents knew what it was like to be Jewish and Cuban respectively, but neither could show me how to be both.

Clark Kent showed me how to be both.

Among the superheroes, Superman was always my favorite. The movies, the comics, the animated series — I ate it all up. Here was this guy that didn’t need to bear witness to trauma-inducing violence to know the difference between right and wrong. He stood up to bullies and had a mind for social justice that stretched back to his Depression-era origins, which activated my politics at an early age. It didn’t hurt that he had all the best powers, too.

But my favorite thing about the Man of Steel was how, even without wearing a mask, the idea that Clark Kent and Superman were the same person was preposterous. People just couldn’t believe that these two identities existed within the same person! Superman had great success keeping his two identities separate; why couldn’t I do the same? I took quiet comfort in knowing that a lot of other kids preferred Batman or Spider-Man to Supes. They didn’t understand him like I did. Superman always had a little Jewishness, too. The “El” suffix in Kal-El is short for the Hebrew word for God. The character’s creators, Jerry Siegel and Joe Shuster, both came from Jewish backgrounds and even grew up in Ohio, just like me. Superman didn’t have a Jewish mother either, but he had two Jewish fathers, so that had to count for something.

One of my favorite comics was the critically acclaimed “All Star Superman” series in which Superman is given an unexpected death sentence and, with his remaining time alive, decides to reveal his identity to Lois Lane. He fills her in on his alien side, takes her to his fortress of solitude, and even creates a serum that gives Lois his powers for 24 hours. This was the only time I had ever seen Superman so completely share himself and his worldview with another. This, I thought, was what great love looked like. Going forward, I’d allow others to label me either Jewish or Latino, but I’d reserve Jake Steinberg — my full, Superman-loving, Jewish and Cuban self — for the people I really loved.

In the fall of 2011, DC Comics would relaunch its entire line of monthly superhero comic books in an event dubbed the “New 52,” due to the fact that 52 different comics were rebooting with a new No. 1 issue. Two of those monthly comic installments were “Action Comics” and “Superman,” both of which starred the Man of Steel, albeit at two different points in his life. From the New 52 on, any version of Superman you were reading was new, changed and updated for the modern era. This version of Superman was now young, inexperienced and — rather than putting emphasis on his Smallville roots — Clark’s alien status was at the forefront of most stories. Most devastating to me at the time, his entire relationship with Lois Lane was erased.

This era for Superman coincided with a reinvention of my own. Shortly after the launch of the New 52, I left Bexley, Ohio, for a suburb of Philadelphia to attend the private, Catholic Villanova University. It became extremely apparent within my first week there that I would have to accept a new normal and a new challenge. At Villanova, I was half-Jew no longer; I was the Jew.

Without any prompting on my part, and often after simply introducing myself, my peers would admit that I was their first Jewish friend. For the entire first semester, a professor called roll with the first and last names of every student, but she only ever said “Jake” for me. When I asked her about it, she replied, “I didn’t want to embarrass you.” The next year, at a play rehearsal, a friend said it was “hotter than an oven in here.” An Augustinian priest walking behind us laughed and called out, “Don’t say ovens in front of him!” At the career fair for seniors, a professor — my adviser — asked me what my major was. She cut me off before I could answer and said, “Business, it’s business, right? Economics?” In that same conversation she told me I reminded her of Jerry Seinfeld.

It was rarely the actual remarks that got to me, but the fact that everyone had decided who I was without my input. My existence had been rebooted. I went from being the “fake Jew” to the one and only chosen person. The Jewish identity kept from me in Bexley was wielded like a weapon at Villanova.

I occasionally tried to wield that weapon myself. For a time I announced myself as Jewish, wearing the identity on campus like a bright red Superman S on my chest. If I brought it up first — reclaimed the identity in that way — it couldn’t be used against me, I thought. My efforts proved futile. On one occasion, I was performing stand-up comedy at a local on-campus event and made jokes and observations playing on my Jewish perspective, like being offered pork at dinner with my Catholic girlfriend’s parents. The event went well, I thought. If I was responsible for what people were thinking about me, then I was happy.

The next comedian in the lineup took to the stage and immediately made remarks about my appearance and “Jewish voice.” He compared me to the lawyer from the movie “Carlito’s Way,” a reference I had to look up but later discovered to be a character played by Sean Penn and based on the real-life attorney Alan Dershowitz. The character was the epitome of a harmful Jewish stereotype (this was before Dershowitz would go on to represent people like Jeffrey Epstein and Donald Trump in court). None of this was good for my brand, but the whole event proved I couldn’t control the ways in which my heritage would be used against me.

At my lowest point, I met a girl who reminded me that the world was basically a good place. She knew I was Cuban and Jewish, but we focused on movies, sports and whatever the dining hall was serving for dinner. It was good and uncomplicated. We dated for three years, but during our senior year I became aware of a fight with her parents. She showed me a text from her father that read, “You’re about to graduate, life is getting serious, it’s time to dump the Jew.” She agreed and admitted to me that I was “never a real option.”

In some ways, I blame myself. I saw Superman as an excuse to hide my identities rather than to exist as the complete synthesized version of them. Clark Kent to some, Superman to others, the two parts only coexisting within himself — it seemed like it worked out for him. When he came clean to Lois Lane about who he really was, he did so on his own terms and in his own way. He trusted someone he loved with his authentic self and she accepted him. I didn’t trust anyone with that. Maybe if I did, I would have been with my Lois Lane.

Superman did eventually bring his identities together. In 2019’s Superman No. 18, “The Truth,” he holds a press conference in which he reveals to the world his secret identity. “… I’m so proud of my heritage,” Superman says, “both from Krypton and Earth. … And when I show up as Superman, I want to show up representing both parts of me at the same time.”

Superman explains that he gets to “see and hear people discover and rediscover themselves all the time,” and it was by witnessing everyday people grow that he was inspired to grow himself. By sharing our stories — our intersectional, multiracial stories — we can inspire everyone from the 82-year-old Man of Steel to the 27-year-old Jewish Cuban to exist truthfully.