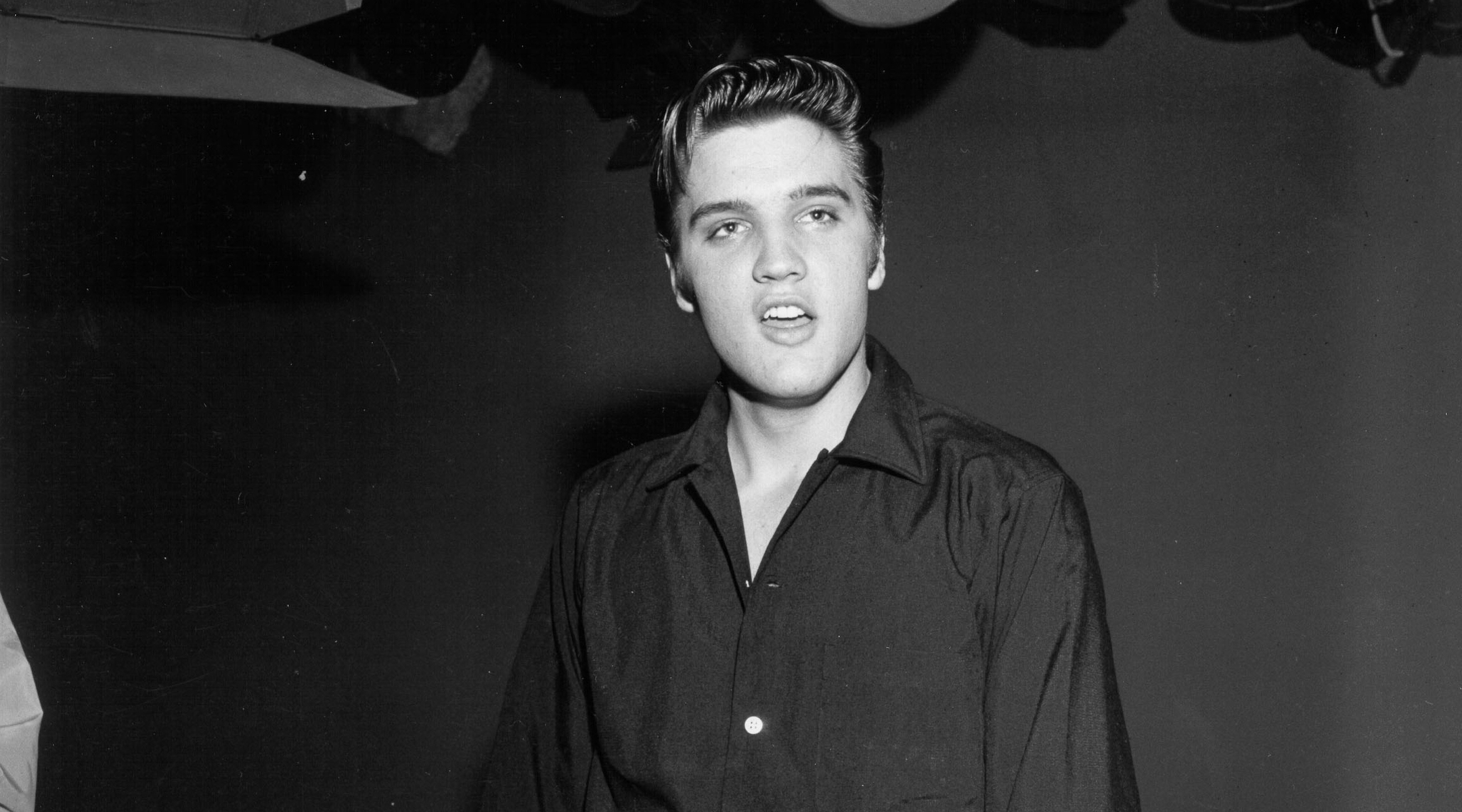 MEMPHIS, Tenn. (JTA) – The large crate sat unopened in a 20,000-square-foot warehouse here for more than four decades, concealing a little-known fact about one of America’s cultural icons.

Inside was the headstone of Elvis Presley’s mother, Gladys, which had been stored in the Graceland archives along with 1.5 million other items since 1977. And on the upper left side of the long-unseen marker — designed by Elvis himself — is a Star of David.

Yes, the King of Rock and Roll had Jewish roots.

The headstone, which was taken from storage only in 2018, is now on display at the sprawling complex in Memphis where Elvis lived from 1957 until his untimely death 20 years later at the age of 42. It sits in Graceland’s Meditation Garden, just outside the mansion and a few feet from Elvis’ own grave.

Stories of Elvis’ Jewish heritage have long been in circulation, but when it comes to a legend like Presley — whose death is not even considered settled fact in some quarters — it’s not always easy to separate fact from fiction. With the headstone now on public display and an accompanying sign proclaiming “Gladys’ Jewish heritage,” any lingering doubts can finally be erased.

“There was a lot of mystery surrounding it,” said Angie Marchese, Graceland’s vice president of archives and exhibits, and the one who came up with the idea of unveiling Gladys’ headstone on the 60th anniversary of her death, partly to dispel doubts about Elvis’ Jewish lineage. “The star is on it, so it answered a lot of questions that were out there.” Gladys Presley’s grave marker, now on display at Graceland. It was designed by her famous son to honor the family’s Jewish heritage. (Dan Fellner)

Marchese says Elvis’ maternal great-great-grandmother was a Jewish woman named Nancy Burdine. Little is known about Burdine, but it’s believed her family immigrated to America from what is now Lithuania around the time of the American Revolution. According to Ancestry.com, Burdine was born in Mississippi in 1826 and died in 1887.

Burdine’s great-granddaughter was Gladys Love Smith, who married Vernon Presley in 1933. Two years later, Gladys gave birth to Elvis in Tupelo, Mississippi. The family moved to Memphis when Elvis was 13.

The Presleys once lived in an apartment directly below the family of Rabbi Alfred Fruchter, the first principal of the Memphis Hebrew Academy. The rabbi’s son, Harold, who now lives in Maryland, said that Elvis actually served as the Fruchters’ “Shabbos goy,” a non-Jew who performs household tasks for observant Jews that are normally forbidden on the Jewish Sabbath. Fruchter said his parents “never had even an inkling” that Elvis had Jewish roots.

“If they had, they would never have considered asking him to be a Shabbos goy,” Fruchter said.

Elvis was especially close to his mother, who died of heart failure in 1958 at the age of 46. Initially Elvis had her buried in a public cemetery in Memphis. Her headstone was marked with a cross.

But Marchese says that six years later, Elvis replaced the headstone with one designed to his specifications. The new marker featured a Star of David on one side and a cross on the other along with the words “Sunshine Of Our Home” engraved between. 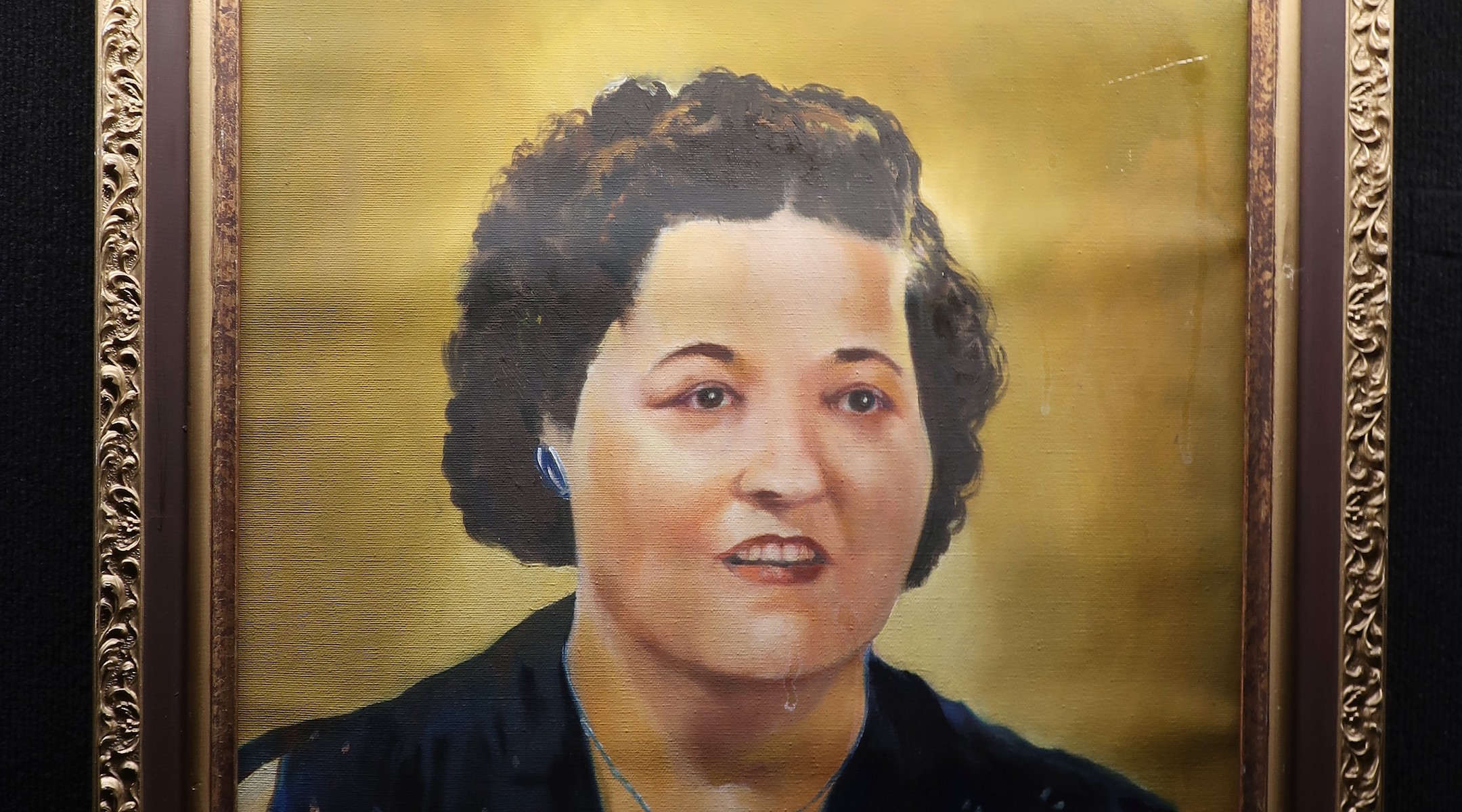 This portrait of Gladys Presley hangs on the wall inside the Graceland mansion in Memphis. (Dan Fellner)

What prompted Elvis to include the Star of David on his mother’s headstone? Marchese isn’t exactly sure, or even when Elvis learned of his mother’s Jewish heritage. But she says “the Jewish faith gave him comfort when he was seeking answers” to help him deal with her passing.

Following an attempt to steal Elvis’ body from a Memphis cemetery, Vernon Presley had the remains of his son and wife moved to Graceland for security reasons. Gladys’ grave marker with the Star of David went into storage. And there it remained until Marchese suggested it be put on public display.

“We thought it would be a great way of honoring her Jewish heritage as well as honoring her,” said Marchese, who has worked at Graceland for 32 years and is one of the world’s preeminent experts on the Presley family. “We think it’s what Elvis would have wanted.”

There is evidence that Elvis’ Jewish lineage meant more to him than just a symbol on a headstone. He gave generously over the years to a variety of Jewish organizations, including the Memphis Jewish Community Center, a donation honored with a plaque that hangs in Graceland today. Elvis’ personal library included several books on Judaism and Jewish history. An entire book on the topic, “The Jewish World of Elvis Presley,” was published last year.

During the final years of his life, Elvis was frequently photographed wearing necklaces with the Star of David and the Hebrew word “chai,” which means life. The chai necklace is kept in a cabinet at Graceland next to the keys to the singer’s famed 1955 pink Cadillac. Never one to be accused of subtlety, Elvis had the necklace designed with 17 diamonds. He purchased the jewelry in 1976, one year before he died. 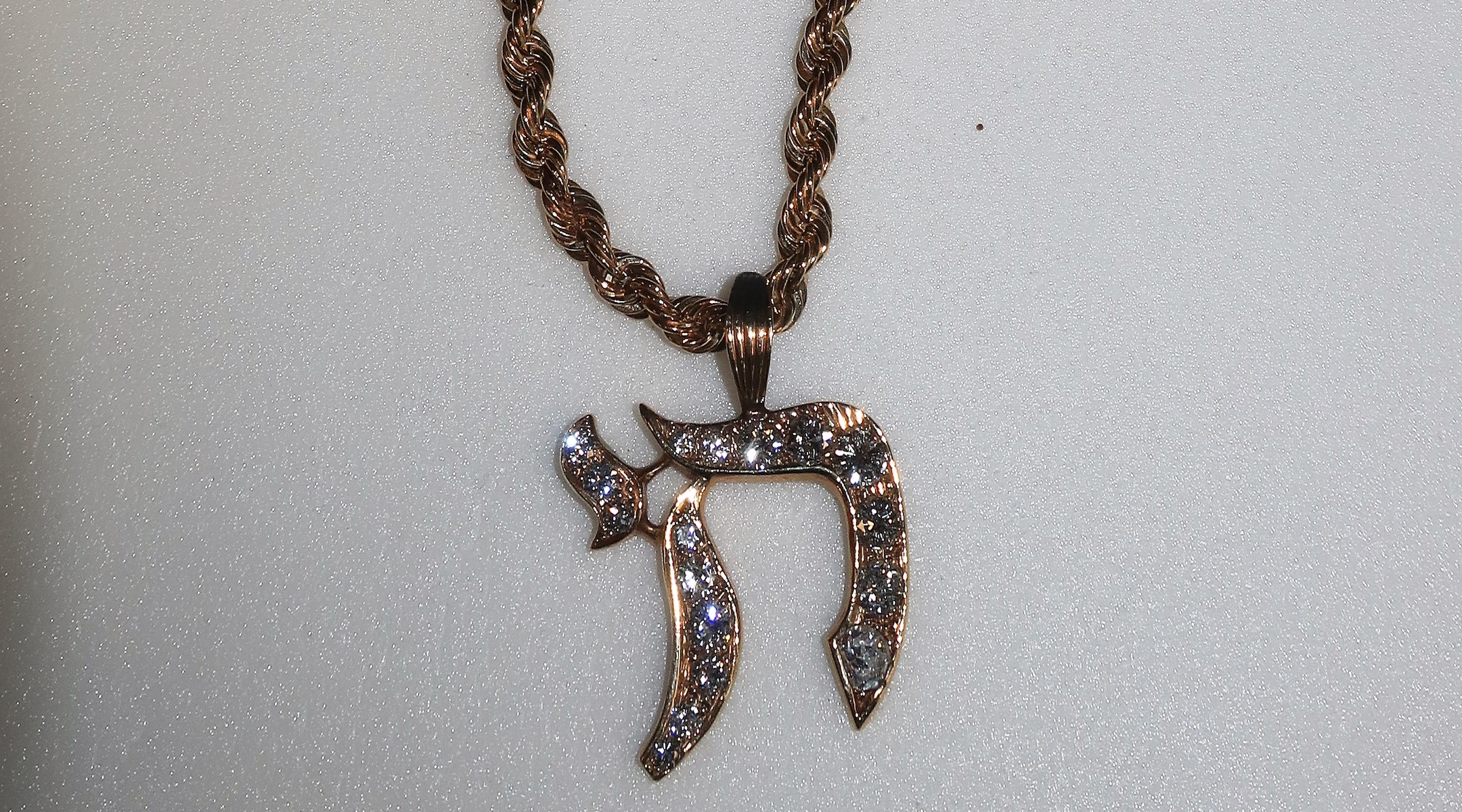 “He would often make a joke, ‘I don’t want to get left out of heaven on a technicality,’” Marchese said. “So he would wear a Star of David, a chai and he would also wear a cross. He wanted to keep all his bases covered.”

Gladys’ heritage notwithstanding, Presley was raised in the Assembly of God Church, but he explored other religions as he got older and began to struggle with physical and mental issues.

“He was always searching for answers as to why he was chosen to be who he was,” Marchese said. “I think he found some of those answers through different religions.”

There have been suggestions that Elvis’ handlers didn’t want his Jewish heritage known to the public, fearing it might prompt some of his Southern fans to abandon him. But Marchese says there is no evidence of that.

“It was not something he was shying away from,” she said. “He would be photographed in these [necklaces] and he would make donations to Jewish community centers throughout his entire life.”