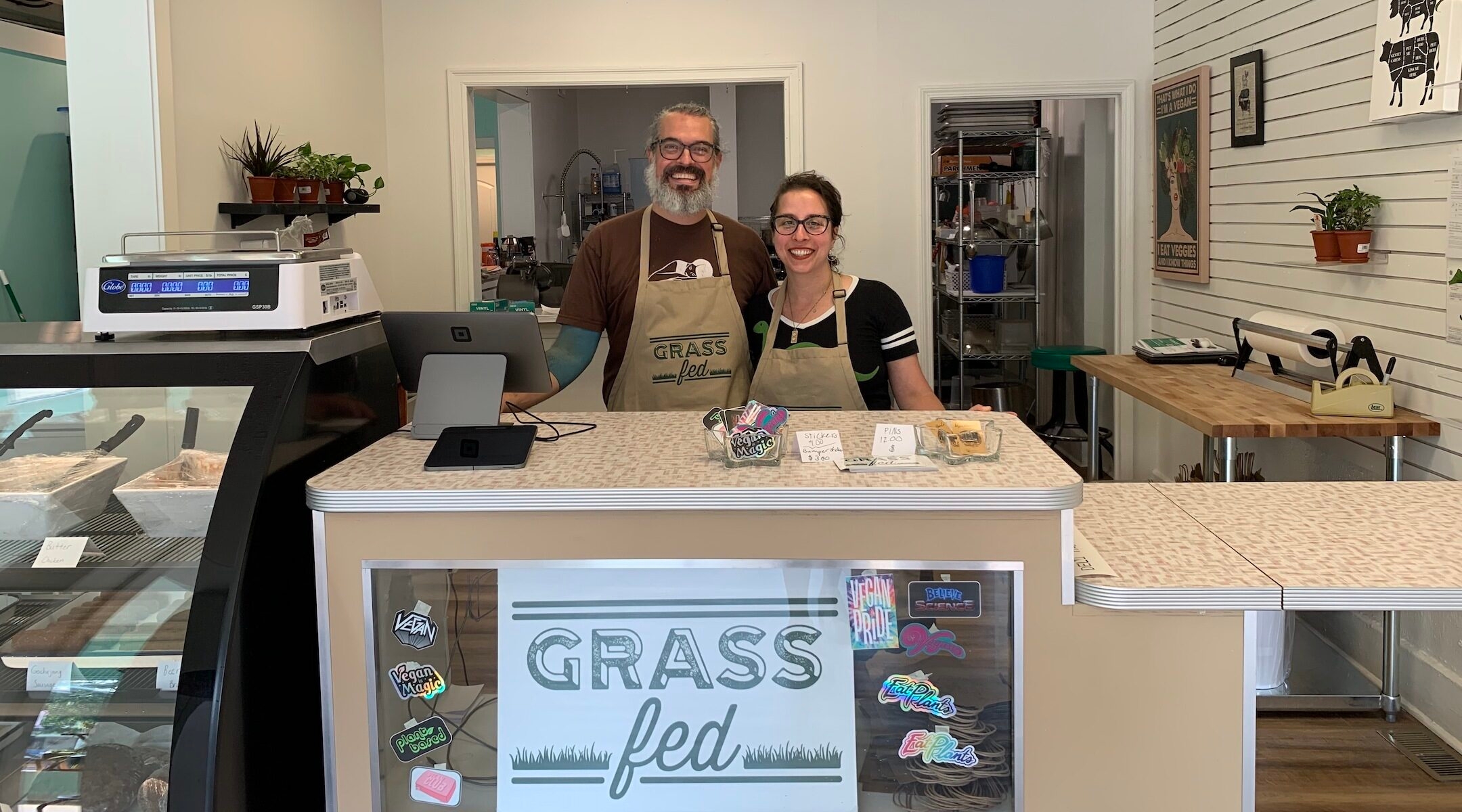 Rob Nipe and Nora Rubel are ready for the Rosh Hashanah rush on brisket at their vegan butcher shop in Rochester, N.Y. (Shira Hanau)
Advertisement

Butcher, of course, is a bit of a misnomer: Everything in Grass Fed — from the sliced “bacon” to the “butter chicken” to the “corned beef” — is made with plant-based ingredients and therefore fairly easy to certify as kosher.

“I did not anticipate the need for it or the desire for it,” Nipe said.

The married couple have been vegans for six years and didn’t eat much meat before entirely giving up animal products. Until last year, Nipe worked as an analyst for the American Red Cross planning blood donation campaigns.

But in December, Nipe quit his job to become a full-time vegan butcher. Rubel works part-time with Nipe at Grass Fed.

It’s a fitting side project for Rubel, a Jewish studies professor at the University of Rochester who studies food, culture and ethnicity. She is writing a book about “The Settlement Cookbook,” a Jewish cookbook published in 1901 that was intended to teach young Jewish women who had recently immigrated to the United States how to run a household.

“I teach a class on Judaism and food, I teach a class on religion and food in America, so this is actually my words sort of colliding,” said Rubel, who enjoys seeing the kosher certification process up close. “I’m kind of fascinated to see it at work here.”

Plant-based meats have had something of a resurgence in recent years, particularly since the development of Impossible and Beyond Burgers, which are a far cry from the Tofurky and fake bologna of decades past. Both Impossible meats, which are made from a soy base and flavored with heme, a molecule that provides the meaty taste, and Beyond Burgers, made from pea proteins and rice, are intended to closely mimic beef in terms of texture and flavor.

Nipe’s first forays into vegan meat development began with a similar goal: his quest for a vegan breakfast sandwich.

“There’s no real place around here that makes one like you think about — greasy, quick,” Nipe said.

He started experimenting with a vegan sausage and tofu egg until he settled on a recipe he and Rubel loved. Then they moved on to a doubly unkosher dish, Philly cheese steaks.

“We’re from South Jersey originally, so the Philly cheese steak was near and dear to our hearts,” said Nipe, who was raised Presbyterian.

Having mastered that, too, Nipe continued experimenting with other styles of vegan meats, eventually starting to take a few dozen orders each week from a growing email list of customers. His experiments led to the realization that eating vegan didn’t have to be restrictive. It just meant getting creative.

“It was kind of like what else can we do?” Nipe said. “Maybe we don’t have to be without.”

Soon they started looking for a storefront with a kitchen where they could set up shop permanently. They got an opportunity to rent a place just a few blocks away from Congregation Beth Sholom, an Orthodox synagogue in this upstate city, making the decision to go kosher easy.  Beth Sholom’s rabbi helped in that regard.

With all the food already free of animal products, the only hard part was switching certain ingredients and seasonings such as wine, dried mushrooms and soy sauce to brands that had kosher certifications.

Being near the synagogue and closer to the more Jewish neighborhoods of Rochester has brought in more kosher-keeping customers. Rubel is already looking forward to the Rosh Hashanah rush on brisket and customers picking up orders before the High Holidays. About 19,000 Jews live here, according to the Rochester Jewish Federation website, and the community has a kosher butcher and several Orthodox synagogues.

“I like that it’s more inclusive,” Rubel said of the decision to go kosher. “It means we can feed more people, which to me feels Jewish.”

The couple hope to eventually serve lunch, too, where customers will be able to order a pastrami sandwich piled high on rye bread with a side of pickles and a Cel-Ray soda. For now they’re sticking with retail service, working on finding a kosher bread supplier and reveling in owning their own store.

“What are the chances that my ancestors would have seen the Presbyterian-raised guy that I married koshering his vegan butcher shop?” Rubel wondered aloud. “It’s just all bringing me a lot of joy.”