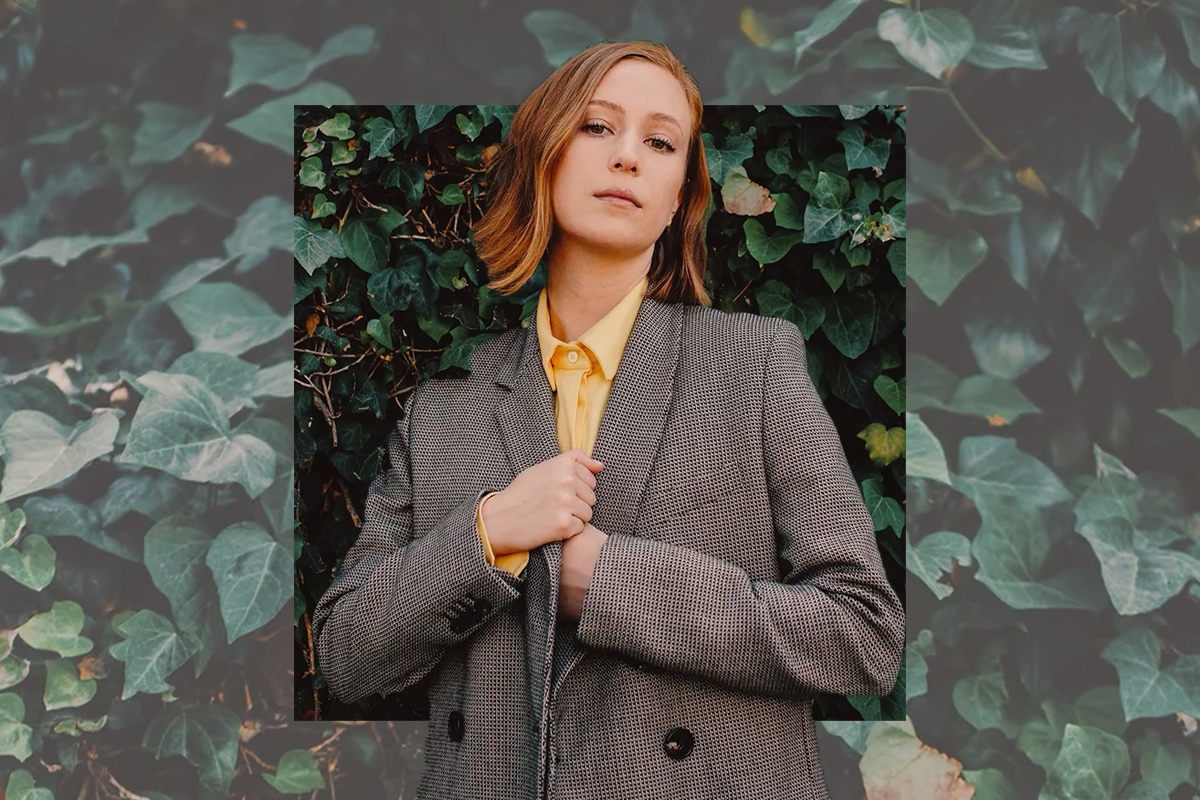 Hannah Einbinder has been taking a lot of walks. Aside from the many tasks that come with being nominated for an Emmy, her main job these days is, as she puts it, “not letting my crippling anxiety ruin my life.” Her greatest salve has been walking it off, sometimes for hours.

“The key is this: If I look like I’m in physically good shape, I’m not well,” she says.

Einbinder is, professionally speaking, doing quite well. The 26-year-old standup comedian turned actress recently scored a nomination for outstanding supporting actress in a comedy series for her role as Ava Daniels in “Hacks,” HBO Max’s dramedy about a legendary comedy diva (Jean Smart) and the 25-year-old “canceled” comedy writer who gets shuffled off to Las Vegas to liven up her set. She’s been called a “breakout star” and a “young comic on the cusp.” But via video call, Einbinder stresses to me that these objective wins do not make her anxiety disappear. Like many before her, she connects some of that anxiety with the fact that she is Jewish.

Einbinder laughs, as she often does after delivering a devastatingly honest remark.

Luckily this won’t be her first experience of awards show pressure. When I ask her to tell me about her bat mitzvah — from which she has shared several excellent throwback photos on her Instagram account — she warns me, “Get ready for this.”

The year was 2008. The theme was “Hannah Einbinder’s First Annual Friendship Awards,” and it was, indeed, structured as an awards ceremony.

“The stars were out that night on the pink carpet,” Einbinder says, gleaming. “My dad’s friends all pretended to be paparazzi, and all my 13-year-old weirdo friends were severely uncomfortable being photographed.”

In true inclusive L.A. fashion, her friends took home awards (in the form of plastic trophies) that night, from “funniest friend” to “best eyes” to “coolest hair.”

She also took the main event — chanting Torah — very seriously, despite being a “not-yet-medicated hyperactive kid beyond all belief.” Her parents requested the rabbi give her a shorter Torah portion because getting her to sit down and study anything was such a tremendous effort at the time. Einbinder prepares for her 2008 bat mitzvah. (via @hannaheinbinder on Instagram)

Einbinder was raised in Los Angeles, where her family belonged to Temple Isaiah on Pico Boulevard, a synagogue that defines itself as “at the intersection of tradition and innovation,” and which the comedian describes as a “super hippie L.A. temple, incredibly inclusive and cool and queer and diverse.” (She says this while holding her pointer and pinky finger in the rock-on sign.) “For me, Judaism has always been music and dance and art and love and all of these really amazing, positive things.”

Growing up, she often visited family on the East Coast to celebrate the High Holidays, and did Shabbat with challah and grape juice — noting “it wasn’t anywhere near shomer Shabbos.” Still, it wasn’t just the culture of Judaism that drew in Einbinder.

Her belief in what she calls “the big H” (as in, you know, Hashem) is a departure from the rest of her family, which includes her sibling Spike Einbinder, a fellow comedian. But the concept of a higher power — and spirituality in general — was always around. Both her parents, comedian Laraine Newman, an original cast member on “Saturday Night Live,” and comedy writer Chad Einbinder were in Alcoholics Anonymous.

“I think they especially wanted to give [the concept of a higher power] to me young because they felt that, much like the origins of Judaism, it was a way to structure life,” Einbinder says.

If Judaism was one of the languages her family spoke, comedy was the other mother tongue, equally formative and rich. Unsurprisingly, Einbinder’s parents started sharing the great Jewish comedians with her at a very young age. Funny people like Mel Brooks, Carl Reiner and Joan Rivers, who provided at least some of the inspiration for Smart’s character in “Hacks,” Deborah Vance.

“It was so much about getting a laugh out of my parents, that was the affirmation,” Einbinder says of her childhood. “It wasn’t grades, or athleticism, or really any of that. It was laughs.”

But despite being steeped (or as she says, “indoctrinated”) in humor growing up, she had no plans to pursue it professionally. It wasn’t until college, at Chapman University in Orange County, that Einbinder fell into improv and later the standup comedy scene. She’s been open about the somewhat tumultuous path she took to get there after being diagnosed with attention deficit disorder and spending years as “a highly medicated teen.”

“In college, I was taking a lot of Adderall and smoking weed every day, constantly,” she recalls. “For several years of my life, I was in an altered state. I was not myself. I still had a tiny bit of me, but it was probably like 90% drugs, 10% Hannah.”

That all shifted when Einbinder was on a film set one day and a guy (whom she thought was cute) told her that she was funny, suggesting she try out for the school’s improv team. Someone else proposed she take a day off Adderall to see if it would help. Long story short: She made the team; she stopped doing drugs; she got a chance to try standup while opening for Nicole Byer’s campus show; she realized “improv is for nerds, this is where it’s at.” Making the transition from standup to acting in “Hacks” was, she assures me, terrifying.

“I was so worried that I would f— it up. And so worried, almost until the last week of shooting, honestly, that I was not honoring the vision of [creators] Paul [Downs], Lucia [Aniello] and Jen [Statsky], despite constant affirmation,” she says. “I was like, they gotta say that. They were so lovely and supportive, and my demons were on call 24 hours a day, just blocking any sort of goodness that seeped into my conscious mind.”

You wouldn’t know any demons were afoot on set when watching Einbinder as Ava on screen. She exudes the perfect Gen Z elixir: cocky, oversharing, scorned bisexual vibes with a healthy dose of self-resentment and pluck. There’s also no shortage of moments of true vulnerability — like when Ava returns home after a family tragedy, and in the fleeting moments when she’s able to poke through Deborah’s hard-fought, tough as (manicured) nails exterior. It was those moments for which Einbinder was most grateful.

“As a comedian, I really crave the ability to be sincere in my art form, and acting — especially in a dark comedy, the way that this is — and having those darker, more sincere moments is a form of self-expression that I didn’t know I needed, but I do,” she says.

Einbinder gets most sincere with me when talking about her Jewish identity and what it means to her now as an adult. She’s wearing her signature Star of David necklace, the one that can be seen in pretty much every photo taken of her, and which she wore during her recent appearance on “The Late Show With Stephen Colbert.” I ask if it’s an aesthetic choice or something deeper.

“I think it’s both,” she responds. “I think it’s gorgeous, and I also think that, based on various antisemitic ideas about what a Jew looks like, it’s important to make it very clear that we can be anything; we are everything.”

Einbinder has fine red hair — not the boisterous dark curls often used to portray Jewish identity, especially in Hollywood — and she reveals that a lot of the antisemitism she’s experienced, especially in college, came from people assuming she wasn’t Jewish and therefore confiding  their sinister thoughts to her.

Antisemitism is one of the many reasons that Einbinder stays off Twitter, the platform where her character in “Hacks” made a joke in poor taste, leading to her career’s temporary plummet.

“When you tweet about antisemitism, or really anything Jewish, the Nazis find you on there,” she says. “It’s not like I couldn’t deal with the messages. I was just like, I’m outta here. What does this do, really, for me? Thus far, not a lot of Nazis on Instagram finding me, so that’s cute.”

Einbinder posted about the rise in antisemitic attacks in the country last December, a poignant message accompanied by a menorah with candles lit for the sixth night of Hanukkah. That same menorah sits on a bookshelf behind her while we talk.

“It’s a tough time right now, so it’s been really about reaching out and making new friends and connecting over this thing that we share that is unequivocally a part of us, whether you observe or you don’t,” she says of her present-day connection to Judaism. “I think of it in my everyday life as my safety. The people I’m safe with. [I’m] trying to create that environment for my friends and family, and trying to keep my eyes on the streets, so to speak, making sure that I’m educating myself around what’s going on and speaking out against it. I don’t see any other option, personally.”

Her face brightens when talking about the connections with fellow queer Jews she’s made, especially during the pandemic, especially online.

“To have people who I feel like I can relate to on both of those levels at the same time is like … a Jew? Dayenu. A queer Jew? Baruch Hashem,” she says.

Einbinder gets verklempt when I point out that it’s been 13 years since her bat mitzvah, essentially meaning this year is her bat mitzvah’s bar mitzvah.

“Oh my God, oh my God, what are we going to do?” she cries, bringing her hands to her temples. “Oh, we have the Emmys this year, so it’s the same thing!”

Einbinder wipes her eyes, perhaps a little teary at the thought of a gold-winged woman taking the place of the plastic trophies of yore. But from what I can tell, Einbinder was ready for the spotlight long before she stood up in front of a congregation. As we’re signing off, she makes sure to share with me a video that she was sent the day before. She holds up her phone to the Zoom screen, alerting me that what I’m about to see is “fully psychotic.” What appears is young Hannah, maybe 9 or so years old, hair pulled back to reveal ears she hasn’t grown into yet. Her bold child-newscaster voice announces, “Hi, we’re here live on the scene at Spencer’s bar mitzvah. Let’s have a few people talk to ya! Come right this way.”

She proceeds to interview her parents, attendants at a neighbor boy’s celebration. Her mother wishes Spencer a “happy bar mitzvah.” Her father offers some show business technique on the fly — hold the microphone a little lower — before joking that he came to the event to get some good contacts for photographers and videographers.

Even at that age, Einbinder oozes confidence and stage presence. Adult Einbinder watches along with me, her hand over her mouth in shock and delight. We get one more shot of the budding performer, an extreme close-up with a direct address to the camera, her freckled face filled with pride.

“I’m Hannah Einbinder,” she says. “Thank you and goodnight.”