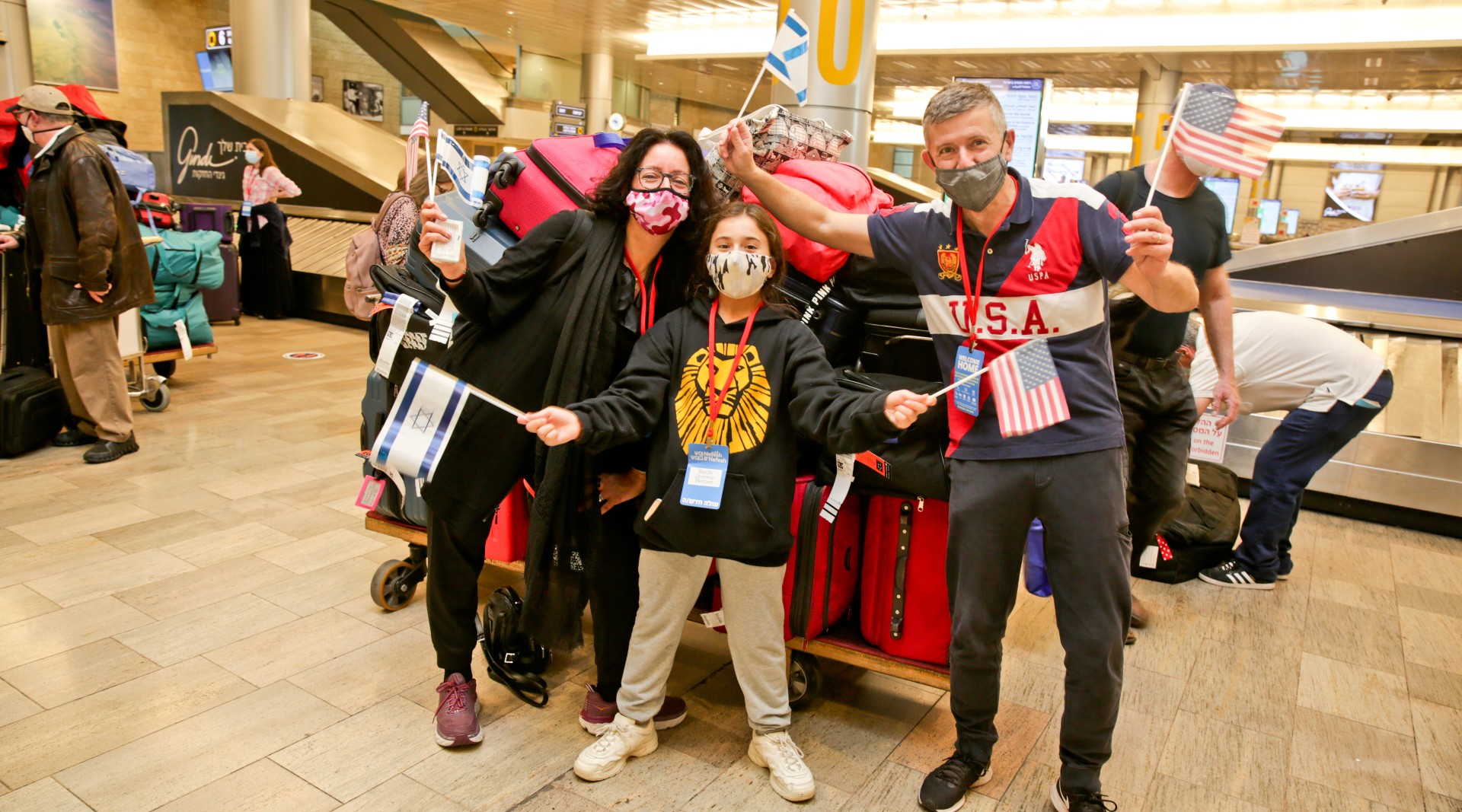 Alex, Yves and Sarih Bettan, from Englewood, N.J., are part of a pandemic-era wave of immigrants to Israel from North America. (Yonit Schiller)
Advertisement

Leah and Yehuda Smolarcik are moving to Israel from Chicago with their four children this summer. The challenges over the past year and a half of COVID convinced them not to put off reaching for their dream any longer.

“My husband and I met in Israel while living there temporarily after college, and we always hoped to return as immigrants,” Leah said. “The pandemic made us realize that there is no sure or stable thing anywhere, so we felt now was the time to make the move.”

The Smolarciks are far from alone in seizing the moment.

Approximately 5,000 people are expected to immigrate to Israel from North America in 2021, a 42% increase over the annual average, according to Nefesh B’Nefesh, which coordinates North American immigration to Israel, known as aliyah.

Such numbers would mark a historic high for aliyah from North America.

Over 2,000 olim — 1,000 in August alone — are expected to arrive in Israel this summer on 40 group flights organized by Nefesh B’Nefesh, which facilitates and assists with immigration from North America in partnership with Israel’s Ministry of Aliyah and Integration, the Jewish Agency for Israel, Keren Kayemeth LeIsrael and JNF-USA.

Since the beginning of the global pandemic in March 2020, more than 18,000 aliyah applications have been opened and some 16,000 unique households have attended online informational events run by Nefesh B’Nefesh.

The major increase in aliyah is due to a number of factors. Young people, families and even retirees are reordering their life priorities amid the experience of the pandemic. Israel’s relatively successful management of the pandemic has cast a more positive light on life in the country. Not only was Israel a global leader in vaccine rollout and endured a much lower fatality rate than the United States — both per capita and per COVID-19 infection — but the country’s socialized health care system proved invaluable during the pandemic.

The normalization of remote work has opened new opportunities for people who want to move and keep their jobs. Some university students are also moving to Israel now with plans to complete their degrees through distance learning online.

“Young people see Israel as a skills-based society and are choosing to launch themselves here instead of staying in North America and following more conventional career tracks,” said Marc Rosenberg, vice president for Diaspora partnerships at Nefesh B’Nefesh.

Internet entrepreneur Eli Cohen, 27, said he saw no reason to stay any longer in Los Angeles after deciding following a 2019 Birthright Israel trip that he wanted to make Israel his home. Having joined a July aliyah flight, he plans on living in the Tel Aviv area, where there is a lively singles social scene.

Cohen’s ability to work anywhere with a laptop and smartphone made the move possible.

“I can work from anywhere in the world with an internet connection,” Cohen said. “And I do business with multiple Israeli companies, so it makes sense to be in an area where there’s a lot of connections to be made.” 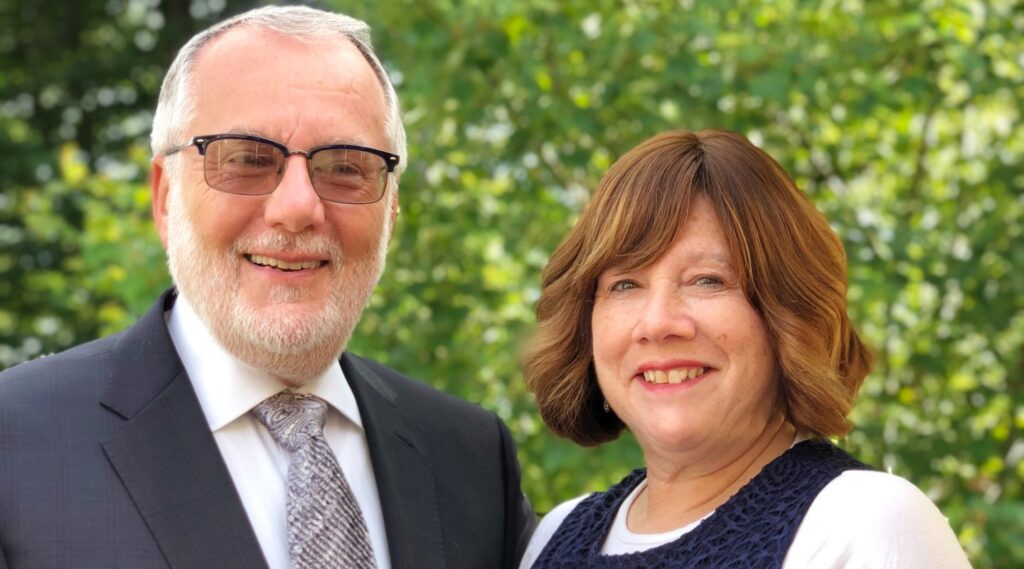 Chaim and Phyllis Reiss decided to immigrate to Israel in their retirement even though all five of their children live in North America. (Courtesy of Chaim Reiss)

Leah Smolarcik, 39, is also taking advantage of the opportunity to make a U.S.-level salary while working remotely from Israel. A medical biller and office administrator at a mental health center, she approached her boss about working from Israel and he assented.

Her husband, a clinical psychologist focused mainly on social-emotional testing for children, as well as geriatric testing, will search for a job after getting settled. Smolarcik said he is open to employment in different fields, too.

“Even just two years ago, 90% of olim started their job search after arriving here,” Rosenberg said. “Now only about 60% do so because of the increase in opportunities to keep their existing jobs and work remotely.”

Aliyah numbers are up as well because a greater number of families with older children are moving, according to Rosenberg. Before the pandemic, the vast majority of the families immigrating were young couples with no children or young children. Since the pandemic, there are more parents with established careers coming with their children in upper elementary grades and high school.

The Smolarciks’ oldest son is 16 and heading into 11th grade. The family will live in a Jerusalem suburb and he will attend YTA, a yeshiva high school for English speakers in the capital city.

“We didn’t want to wait until any of our kids were old enough to opt out of coming with us to Israel,” Leah Smolarcik said.

Another change since the pandemic is increased interest in immigration among retirees whose children still live in North America rather than almost exclusively among retirees following their adult children to Israel.

Naomi, 67, a retired nurse who for privacy reasons asked that her last name be withheld, will make aliyah this summer from Woodmere, New York, along with her husband. They plan to buy an apartment in either the coastal city of Netanya or Jerusalem.

After several years of regularly spending about two months per year in Israel, Naomi said she and her husband are ready to make it their primary home. With the option of spending part of the year back in New York with their three children and eight grandchildren, they don’t see any reason not to make their long-held aliyah dream come true.

Naomi said she looks forward to her American grandchildren coming to study in Israel after high school and being able to spend time with them.

Chaim Reiss, 73, also takes comfort in knowing that his grandchildren will come and study in Israel after he and his wife, Phyllis, make aliyah in August from Boca Raton, Florida. The couple lived for many years in Far Rockaway, New York, before retiring from their jobs in business and accounting for major Jewish organizations and moving to the Sunshine State a year ago.

By keeping their apartment in Florida, Reiss and his wife plan to maintain a foothold in North America, where their five children, many grandchildren and one great-grandchild live.

“The family used to come to us for holidays in the U.S., and we hope they can come be with us in Israel,” Reiss said. “In addition, we hope to see them when we use our Florida home during the winter months.”

For decades, Reiss made two trips to Israel per year as part of his work. But making aliyah was never something he and his wife felt they could do because of career and financial reasons.

Now they are ready to make their principal home the Jerusalem apartment they purchased four years ago in anticipation of their eventual aliyah.

“As a Jew, I have always believed that my place is in Israel. Now is the time to act on that belief,” Reiss said. “I have no more excuses.”