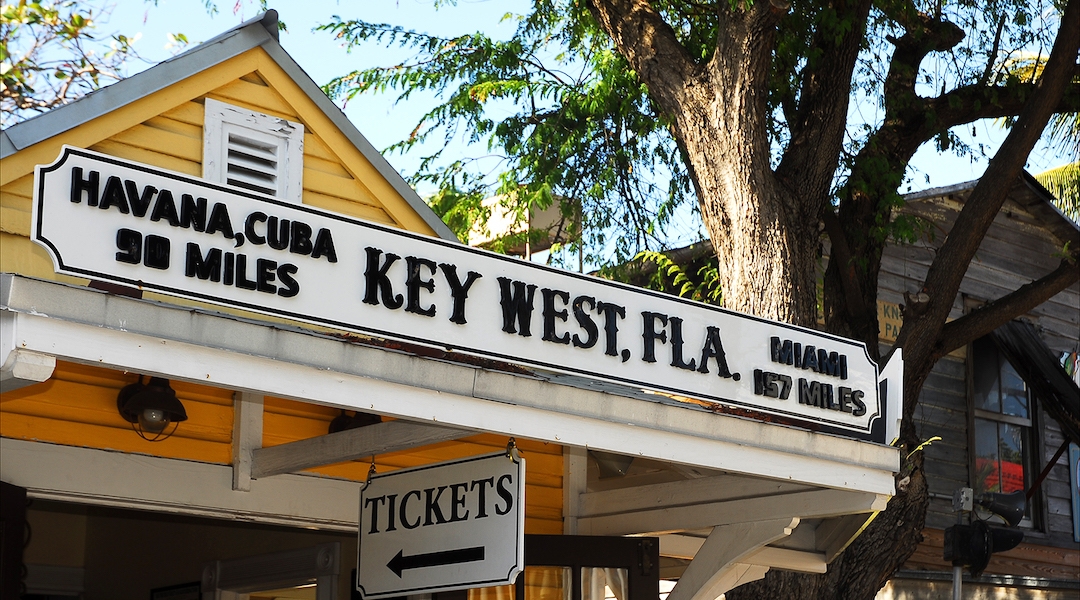 Key West, Florida, is much closer to Havana, Cuba, than to Miami, as is apparent on this storefront in Mallory Square. (Larry Luxner)
Advertisement

KEY WEST, Fla. (JTA) — On any given afternoon, hundreds of visitors here patiently line up for selfies next to a brightly painted, 12-foot-high concrete buoy marking the southernmost point in the continental United States.

Just behind this landmark, a less obvious monument overlooks the Atlantic Ocean for a few days a year: a menorah erected during Hanukkah by Chabad Jewish Center of the Florida Keys & Key West. Billed as “the nation’s southernmost menorah,” the gimmick is just one way that Rabbi Yaakov Zucker attracts Jews among the 2.5 million tourists who flock to the Keys annually.

“For a while, there was also a ‘southernmost Christmas tree’ and then they stopped putting it there. But I’ve continued my menorah tradition. People like these things,” said Zucker, 49, who often cruises up and down Duval Street, the epicenter of Key West’s famous party strip, in a modified golf cart, chatting up Jews and trying to convince men to put on tefillin.

Key West is the southernmost among a string of islands off the southern coast of Florida (called the Keys) that are linked to Miami via a 113-mile highway that crosses the water. While the COVID-19 pandemic devastated local tourism last year and large cruise ships have yet to return, Key West’s hotels are again packed with visitors. Most are Americans who arrive by car from the mainland, but the number of international visitors is growing.

Once Florida’s most populous city in the 19th century, Key West today doesn’t even rank in the state’s top 150. But among its 24,000 or so residents are about a thousand Jews, about one-third of whom are Israeli expats, according to Zucker. Another thousand or so Jews are scattered elsewhere in the Keys, mainly in island towns such as Islamorada, Key Largo, Marathon and Tavernier.

“When I first came to Key West, I called my dad up and said, ‘They must really love Jews here. Every store has a mezuzah,’” recalled Sam Kaufman, the vice mayor here and a regular at Chabad services.

That tradition dates back to the 1920s, when the local merchants’ association ruled that only people who resided permanently in Key West could operate businesses on Duval Street. 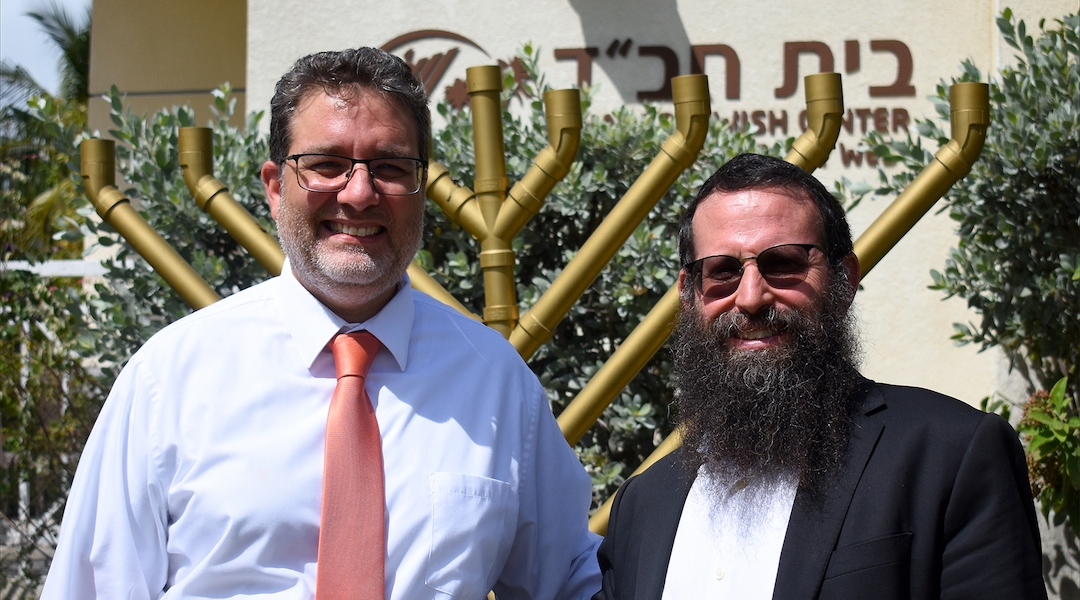 The Chabad center, housed in a former Lutheran church on Trinity Drive, is a relative newcomer to Key West. Jews have lived since 1886 in this laid-back fishing town nicknamed the Conch Republic, which has inspired hard-drinking celebrities from novelist Ernest Hemingway to songwriter Jimmy Buffett. That’s the year a massive fire destroyed Key West’s commercial district, creating opportunities for Yiddish-speaking peddlers and shopkeepers from New York, according to Arlo Haskell’s 2017 book, “Jews of Key West: Smugglers, Cigar Makers and Revolutionaries (1823-1969).”

In the 1890s, some of these early Jewish pioneers helped buy weapons for José Martí’s anti-Spanish revolution in Cuba, only 90 miles to the south. And in 1899 — just two years after Theodor Herzl’s first Zionist Congress in Basel, Switzerland — the Federation of American Zionists opened a Key West branch to raise funds for an eventual Jewish homeland in Palestine.

Congregation B’nai Zion, a nonaffiliated synagogue with about 100 members, is the oldest synagogue in South Florida. Established in 1887, it occupies an entire city block along United Street, not far from its original location at the Sidney M. Aronovitz U.S. Courthouse, named after a prominent Jewish lawyer and third-generation Key West resident.

“A lot of Jews come to Key West to disappear from the radar,” said the synagogue’s Israeli-born rabbi, Shimon Dudai, 76. “Most of the time they become family.”

There can be a disconnect between the Israelis and local Jews, Dudai said.

“Local Jews don’t mix much with the Israelis,” he said. “When I first came here, I went to every store and met all the Israelis. I knew they were not the kind of people who would come to a place considered Reform. That’s the reason we’re not affiliated, although my congregation welcomes all streams of Judaism.”

Meir Mergi, 42, is originally from the Haifa suburb of Kiryat Ata. He’s lived here for 20 years, selling T-shirts, other clothing and local souvenirs at his Duval Street shop.

“I never planned to stay in America. It was supposed to be a three-month vacation,” Mergi said. “Key West is the best place to be if you want a quiet life. I’m very happy here.”

From April to June of 2020, as coronavirus infections spiked across South Florida, Key West and the other islands were closed off to nonresidents. Police blocked the Overseas Highway at the boundary with Miami-Dade County.

“If you didn’t show an ID that you lived in the Keys, you couldn’t get in,” said Zucker, who is also a chaplain with the Monroe County Sheriff’s Department. “To get back into town, I had to write our Israeli guests a letter that they were coming to see me.”

These days, Kaufman is optimistic about the future. Crime is low and Key West is packed with visitors.

“There’s pent-up demand for tourism, it’s a safe place and it’s drivable,” Kaufman said. “During spring break, hotel rooms were going for $1,200 a night, so we’re not really suffering.”

In fact, some Jewish retirees moved to the Florida Keys during the pandemic to escape public health restrictions up north. 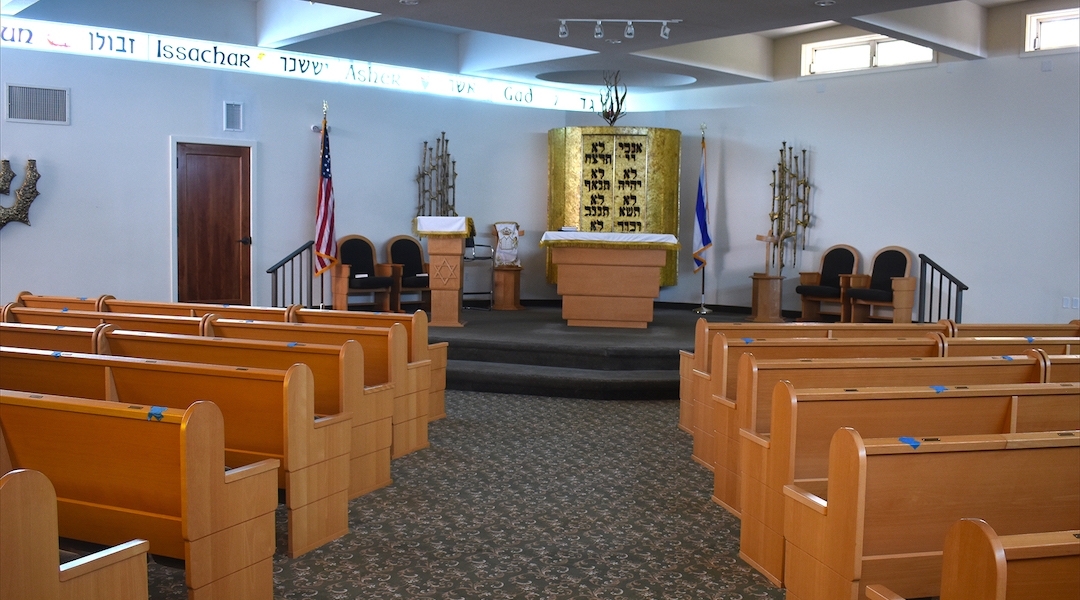 The main sanctuary of Congregation B’nai Zion, a nonaffiliated ssynagogue in Key West with about 100 members. Founded in 1887, it’s the oldest synagogue in South Florida. (Larry Luxner)

“I must have gotten at least 30 phone calls from people wanting to move to the Keys from New York and Chicago,” said Zucker, who hosted over 100 people at Chabad’s Passover seder this year. “After coronavirus, they want to be off the grid. They don’t want to be in big cities. People saw what happened, and nobody has insurance that some new variant won’t happen again.”

The Keys Jewish Community Center, located at Mile Marker 93 along the Overseas Highway, is the only synagogue between Key West and Homestead on the Florida mainland.

The congregation’s president, Joyce Peckman, who settled here in 2003 from New York, said that about half of the 170 member families have second homes elsewhere, with some of them spending only a few weeks a year in the Keys. The JCC once had a Hebrew school with 10 children, but they all grew up and moved away. More than half intermarried, she said.

“If I had young children, I would not move here,” Peckman said. “The vibe here in the Upper Keys is very laid back. People came here for diving, fishing, relaxing and getting away from it all. But there are very few Jews, and if you have kids, you want them to be someplace where there are other Jewish kids.” 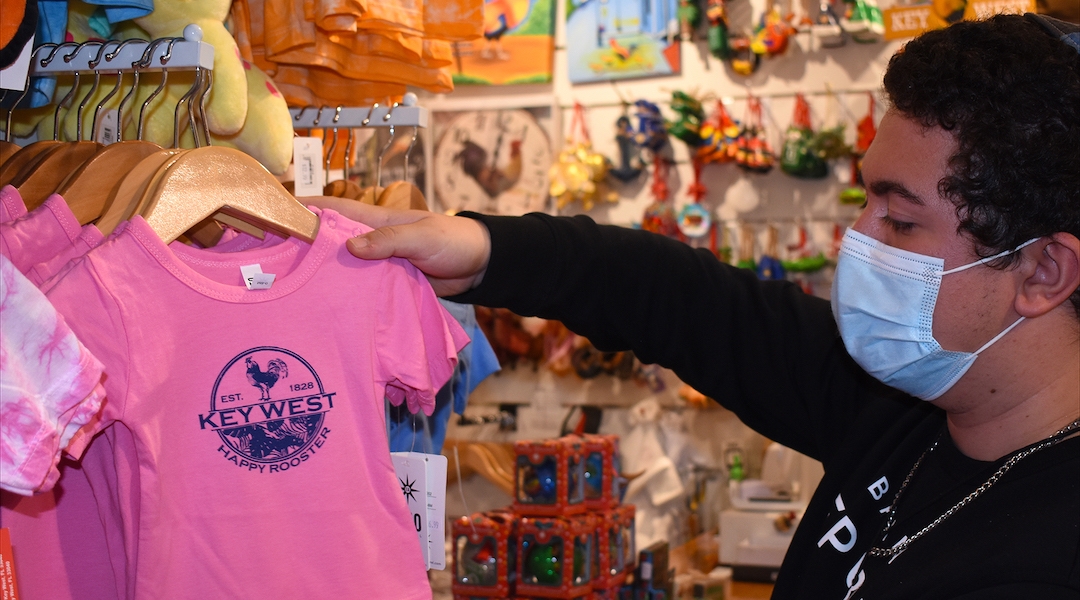 “There are really no Jewish kids my age here. There’s only bars and drugs; it’s very limiting,” the teenager said. “After graduating, I want to go to Israel, join the army and focus on cybersecurity.”

Sanouf brightens whenever the occasional Israeli tourist walks into his shop and he gets the chance to practice Hebrew. And nearly every day, non-Jewish tourists inquire about his kippah.

“They ask me, ‘What’s that thing on your head?’” he said. “I explain to them that there’s something above me, and that I’m not the only thing that matters.”