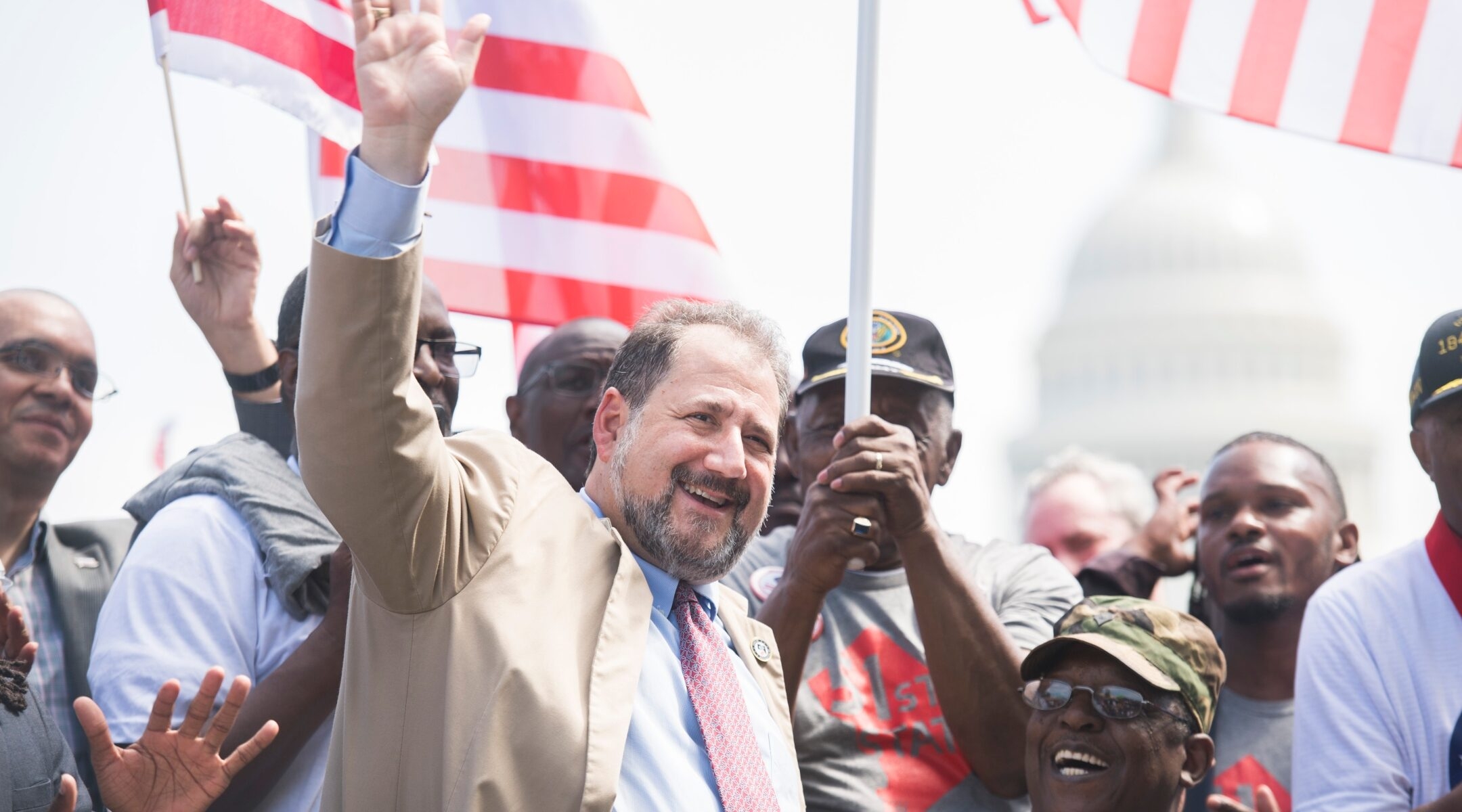 WASHINGTON (JTA) — Being a shadow senator pays about as much as you’d think any job title with “shadow” in it would pay — nothing. It also comes with no congressional powers.

Washington, D.C. has had two shadow Senate seats since 1990, filled by a total of only four different people, and Puerto Rico has had two seats since 2017. They all operate entirely outside of the official U.S. Senate.

One of the D.C. senators is Paul Strauss, a Jew from New York City who has held his seat since 1997. So he’s clearly okay being one of the two least powerful people in the United States who call themselves senator.

“It’s a labor of love, really,” he told the Jewish Telegraphic Agency.

Shadow senators have existed in the U.S. since the 18th century, mainly as advocates for achieving statehood in areas without representation in government. They existed in some of the earliest American territories, like the precursors to what are now Michigan, Minnesota and Oregon.

Strauss’ job — well, his unpaid side job to his successful law career — is no different. He lobbies real senators and travels across the country to make the case that Washington, D.C., should be a U.S. state.

Strauss also advocates for his constituents’ other often progressive goals and proudly represents the local Jewish community of about 28,000, which comprises about 4% of the total population and are leaders in all spheres. He noted that for decades he was the only Jewish candidate to win district-wide votes. In 2014, he was joined by two district councilors who are Jewish, Brianne Nadeau and Elissa Silverman.

“For a long time I was the only Jewish citywide elected official,” he said. “We now have two Jewish members of the D.C. Council. I think I’m still the only one that ever had a bris.”

The longstanding Democratic goal of D.C. statehood is beginning to look like a pipe dream than it was when Strauss started in politics. The U.S. House of Representatives passed a D.C. statehood law in April, and it is closer to passage now in the Senate than it has ever been.

Ahead of last year’s primaries, Strauss focused on making the statehood question an issue in Iowa, and he was pleased when it emerged in questions to presidential candidates.

“When you have actual Iowa voters in Des Moines and Cedar Rapids and around the state asking all of these presidential candidates about statehood, getting them on record, that played an important role in making sure that all of our national candidates at least had to take a position on statehood, and we literally locked in just about every Democrat to support D.C. statehood,” he said.

Democrats hold a razor-thin majority in the Senate, and Strauss says he is hyper-focused on getting four holdouts, all from swing states, to back a D.C. statehood bill: Mark Kelly and Kyrsten Sinema of Arizona, Angus King of Maine and Joe Manchin of West Virginia.

Even if all four Democratic holdouts sign on, there’s the matter of getting around the current filibuster, the 60-vote minimum required to advance legislation. Strauss said the strategy now is not focusing on scuttling the procedure — something Democratic Majority Leader Chuck Schumer would love to do to achieve his Senate goals — but work around it.

“You know, for as many years as I’ve been doing this it’s hard not to be enthused by the momentum that we have now,” he said.

Strauss interned with New York City Mayor Ed Koch’s administration in high school, and had already tasted the lowest level of representative power during his days as a college student at American University, when he was elected to the local Advisory Neighborhood Commission — a network of bodies that the city is required to consult ahead of any decisions, major and minor. He stood out enough that his ANC elected him chairman while he was still a student.

Ten years into that (also unpaid) position, he was seeking a platform that would better influence D.C.’s quest for statehood when he heard that Jesse Jackson, the civil rights leader and onetime Democratic presidential hopeful, was retiring after serving one term as D.C.’s first shadow senator. “I felt that I was ready for bigger and better challenges,” he said.

Since then, he has won primaries and general elections by wide margins, most recently last year.

Strauss appears on the generic electoral ballot, alongside officials elected to positions with actual power, and garners as many votes as they do — but he has as much access to the Capitol as any civilian, and found himself unable to circumvent security measures put in place after the coronavirus pandemic and the Jan. 6 insurrection.

Strauss also lacks all the swanky lawmaker privileges. Under Republicans, Congress passed laws banning any funding for his office, so the District has him set up in a municipal building with a paid staff of three to four people, supplemented by volunteers, who handle constituent service calls — for instance, helping people obtain passports.

Strauss, 57, is a member of Washington Hebrew, the Reform synagogue favored by the city’s Jewish political establishment, and was for a time also a member of Temple Micah, considered the D.C. synagogue most identified with social justice. Don’t search for hidden meanings about balancing both wings of the Democratic Party in his double affiliation: He simply lives near Washington Hebrew, while his daughter had friends at Temple Micah and wanted to have her bat mitzvah there.

Despite the fact that he calls himself “not particularly observant,” Strauss roots his identity and his work in Jewish values.

“I think very much the work I do embodies Jewish values, whether it’s tikkun olam, whether it’s tzedek [justice] or even the Abrahamic principles of the golden rule and treating people the way we wish to be treated. Promoting fairness, equality is very much consistent with the values and ethos of our community,” he said. “And so I just see the work I do as a natural extension of that.”