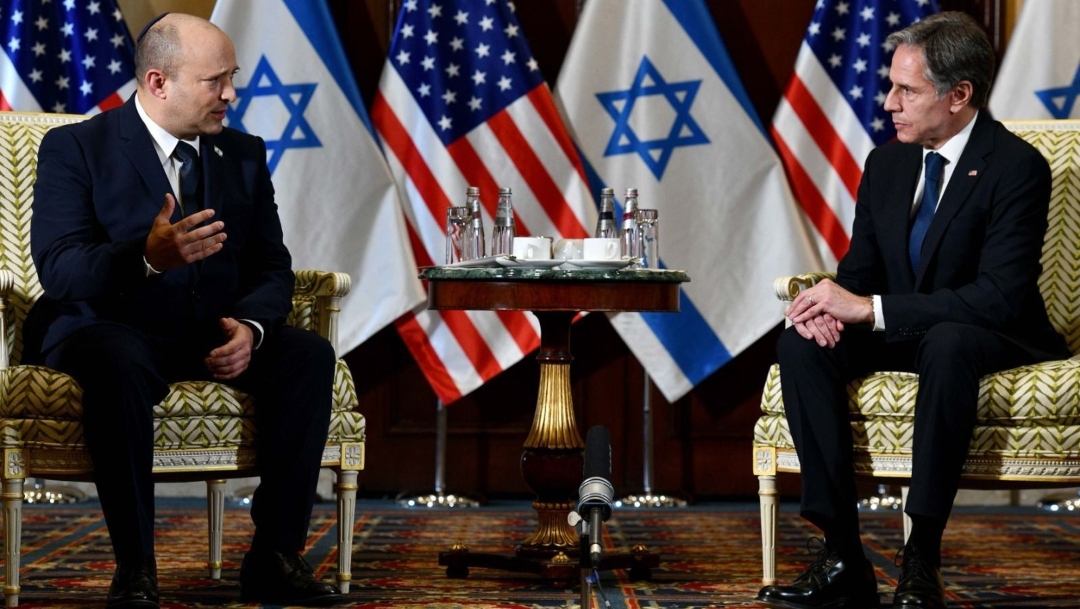 WASHINGTON (JTA) — The highly anticipated first meeting between Israeli Prime Minister Naftali Bennett and President Joe Biden will have to wait — but so far it’s not canceled in the wake of Thursday’s bombing in Afghanistan that killed at least 12 U.S. troops.

After news broke of the explosions outside Kabul’s airport, the White House announced the Biden-Bennett meeting originally scheduled for Thursday would be pushed to Friday.

An Israeli official told the Jewish Telegraphic Agency that Bennett had delayed his departure from Washington, originally planned for Thursday night, until Saturday night. Bennett, an observant Jew, does not travel on the Sabbath.

At least two explosions outside the Afghan airport, where thousands of people are seeking evacuation from country now that it is in the hands of the Taliban, killed and injured dozens. Officials said the blasts killed at least 12 U.S. Marines, but precise numbers were not otherwise available on Thursday afternoon.

“On behalf of the people of Israel, I share our deep sadness over the loss of American lives in Kabul,” Bennett said on Twitter. “Israel stands with the US in these difficult times, just as America has always stood with us. Our thoughts and prayers are with the people of the U.S.”

The meeting was supposed to launch a new relationship between two leaders who agree on little when it comes to substantive policy but are eager to get beyond the tensions that Bennett’s predecessor, Benjamin Netanyahu, stoked with Democrats.

That was clear in a background briefing two top officials in the White House gave reporters on Tuesday evening. One said that Biden’s decision to pull out of Afghanistan would free up more time and attention for Israel.

Israel and the Taliban historically have had little to do with another, but Israel has traditionally been wary of the U.S. pulling out of parts of the Middle East.

“If anything, the end of America’s military involvement in Afghanistan frees up resources and attention and ultimately allows us to better support our partners like Israel,” said one of the officials, who spoke anonymously, a typical condition of such background briefings. “I’m often asked, ‘Are we de-prioritizing the Middle East and our friends in the Middle East?’ And nothing could be further from the truth.”

One of the officials sought to push back against claims that the pullout from Afghanistan was unsettling for Israel because it signaled a continuum of former President Donald Trump’s withdrawal of American influence from the world. Trump pulled U.S. troops out of Syria and initiated the drawdown from Afghanistan.

The officials did not shy away from outlining the differences between Biden and Bennett, who earlier this week told The New York Times that like Netanyahu, he opposed Biden’s bid to reenter the Iran nuclear deal, and that he would not allow a Palestinian state to be established while he is prime minister. Trump, at Netanyahu’s behest, pulled out of the deal in 2018.

Instead, the officials said, they were seeking incremental steps that would roll back tensions.

“President Biden believes a negotiated two-state solution is ultimately the only way to ensure Israel’s future of Israel as a democratic and Jewish state. That’s been his consistent position throughout his career,” one of the officials said. “And, of course, we recognize the reality that resumption of talks and negotiations is not likely in the near term for a variety of reasons. But there are a number of steps that can be taken to kind of dampen the risks of further sparks to conflict, which is something that we have seen Prime Minister Bennett and his government very much committed to.”

Bennett said he wants to outline for Biden plans to join with Arab allies in the region to contain Iran. One of the officials said that conversation would be welcome, even as the Biden and Bennett governments disagree on the utility of reentering the nuclear deal.

“This will obviously be a very rich and, I think, detailed conversation with the Israeli side because our policy towards Iran is not all focused on the Vienna track,” the official said, referring to where the deal reentry talks are taking place. “It’s a multifaceted, multidimensional policy of pressure diplomacy and a number of other tools and deterrence.

“So I think we’ll have discussions at the Pentagon, here at the White House, and the State Department about Iran — the complexity of the Iran problem, but also the reality of the challenge we face and how best to confront it.”

Bennett wants to demonstrate that he can hang every bit as tough as Netanyahu in defending Israel’s interests in Washington while maintaining a closeness with both parties that every Israeli prime minister, bar Netanyahu, has seen as critical to Israel’s security.

He got one brief public opportunity to make that case on Wednesday when he met with Secretary of State Antony Blinken.

“I bring from Israel a new spirit,” Bennett said, appearing with Blinken, “a spirit of folks who sometimes harbor different opinions, but work together in cooperation, in goodwill, in a spirit of unity, and we work hard to find the common things that we do agree upon and move forward on it, and it seems to be working.”