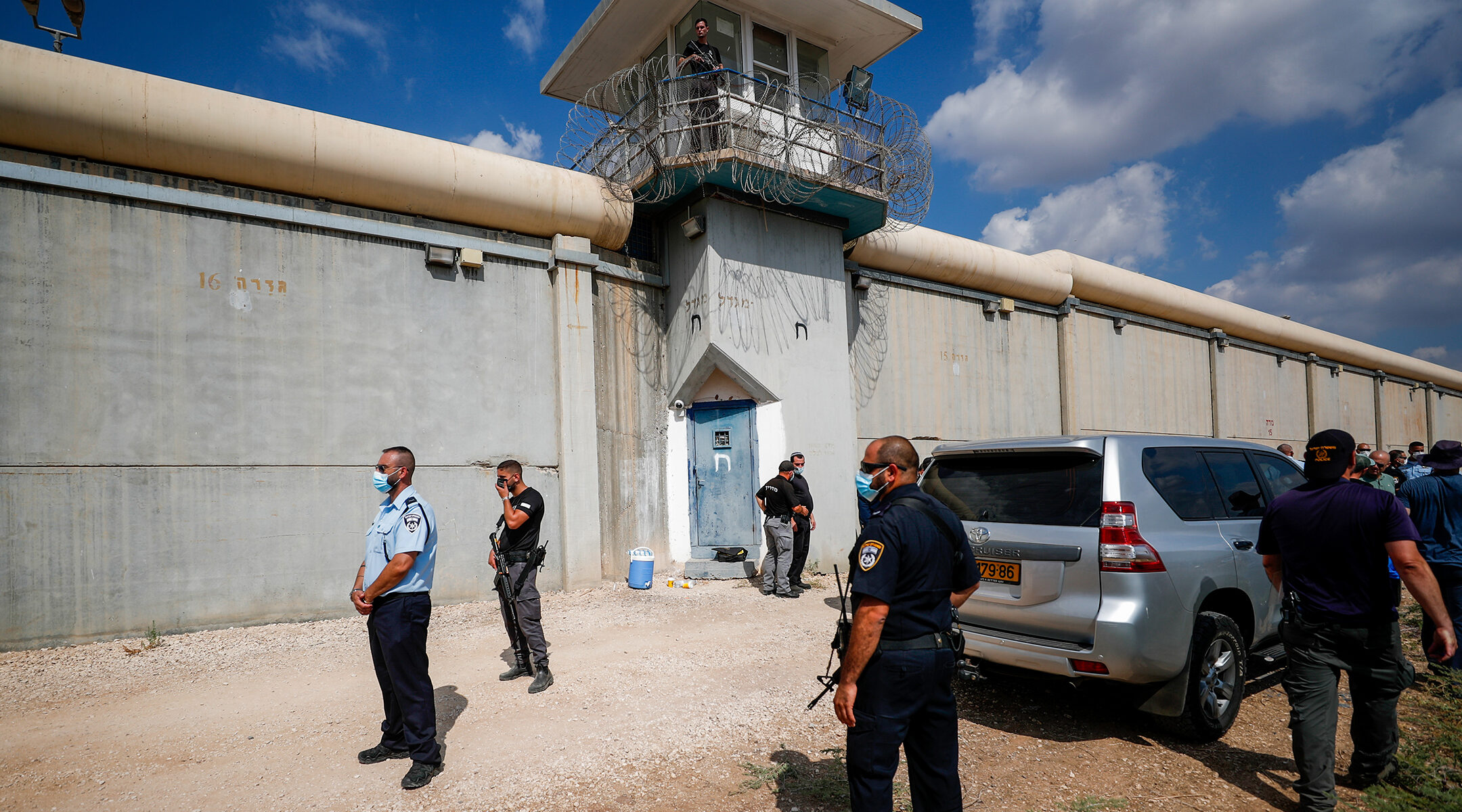 Police officers and prison guards inspect the scene of a prison escape of six Palestinian prisoners outside the Gilboa Prison in northern Israel, Sept. 6, 2021. (Flash90)
Advertisement

(JTA) — Six Palestinian men who were imprisoned in Israel on terrorism charges escaped from their high-security jail, apparently through a crawl space.

Five Islamic Jihad militants and a Fatah operative — Zakaria Zubeidi, one of the best-known Palestinians convicted in Israel for terrorism — are the subject of a massive manhunt that began early Friday, hours after their escape was discovered. They are considered dangerous with intent to carry out terrorist attacks.

Two civilians reported to police seeing several men running through a field at 2 a.m. Monday near Gilboa Prison, also known as Shatta Prison, in northeastern Israel. Police alerted the prison to the reports, prompting guards to conduct a head count through which the escape was discovered, Ynet reported.

The escapees belonged to two separate prison cells. Inside one of the cells, the guards discovered a hole that led to a crawl space under the floor tiles. Through the crawl space, the prisoners appear to have moved under the building, which is considered one of Israel’s best-guarded penitentiaries, and beyond its walls. They hammered their way above ground once they were outside the prison perimeter, according to Ynet.

The Israeli General Security Service, or Shin Bet, believe the men have made it to the West Bank, where they were born and their families live.

The prison facility was completed in 2004 and houses 300 prisoners. Three of the prisoners were considered likely to attempt to escape.

Zubeidi, 45, was arrested in 2019 for shooting at Israelis in the West Bank. He has been in and out of Israeli prisons for most of his life, including a sentence for his supervision of a terrorist attack in 2002 in the city of Beit Shean that killed six.

An eloquent interviewee with excellent Hebrew, Zubeidi has given the Israeli media many interviews that have made him a well-known personality both there and in the West Bank and Gaza. Many consider Zubeidi a symbol of the Second Intifada.

These are the other escapees:

Iham Kamamji, 35, was convicted in the 2006 murder of Eliyahu Asheri, an Israeli 18-year-old who had asked Kamamji for a ride near the West Bank settlement of Ofra. Kamamji buried Asheri’s body. He was also planning to carry out a suicide attack, as per his conviction.

Yakub Kadari, 49, was convicted of planning several attacks on Israelis. He was sentenced to 35 years in prison in 2003.

Monadal Infiat, 26, was convicted two years ago of belonging to the Islamic Jihad terrorist organization.