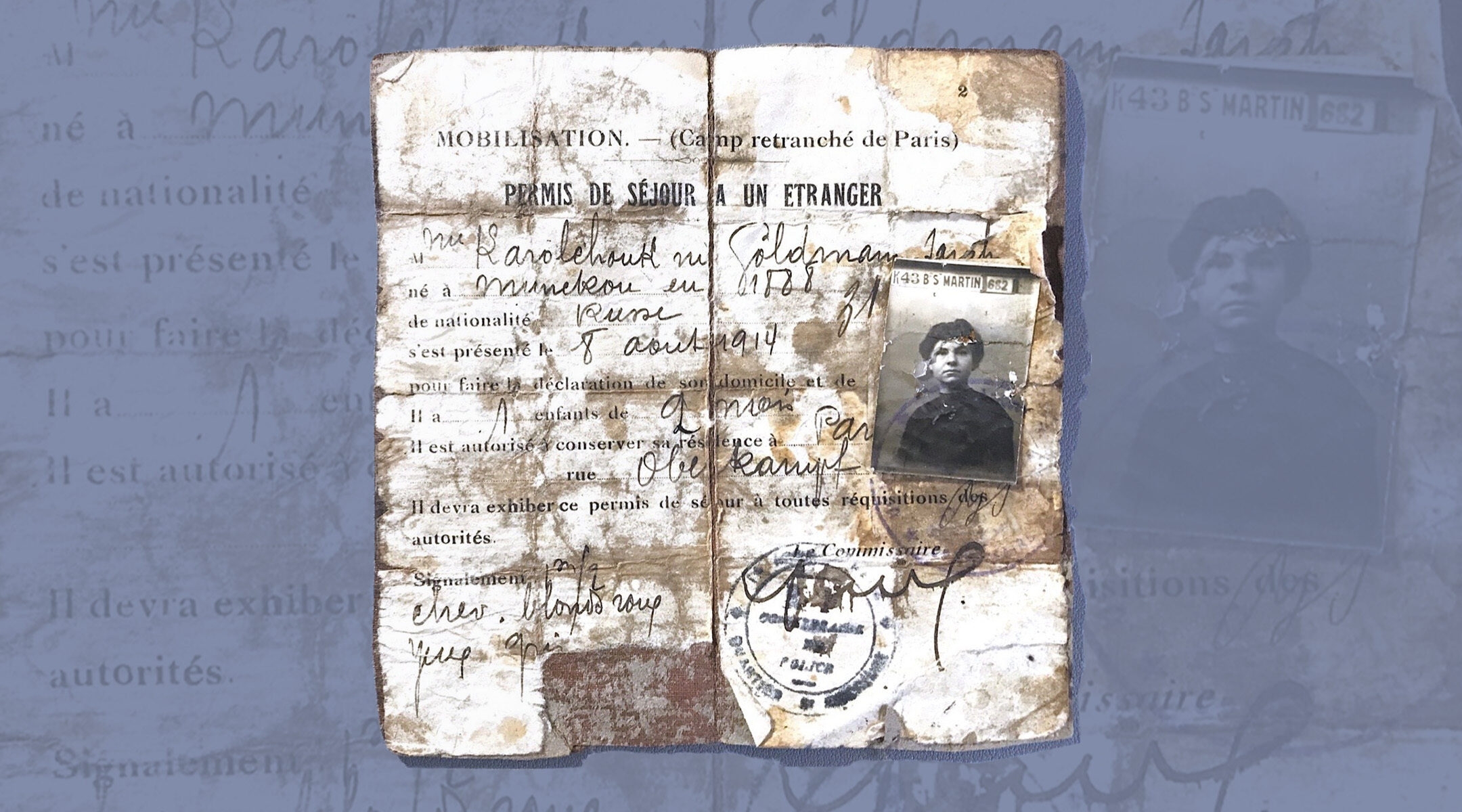 The author's grandmother’s French residence permit from 1914 includes a spelling of her husband’s original name, Karolchouk, before he and his brothers changed it to Carroll. (Courtesy)
Advertisement

(New York Jewish Week via JTA) — Shortly before he died, my dad gave me a trove of family documents, some dating to the 19th century. For the first time I had confirmation of what our family name was before a great-uncle changed it to Carroll when he and his brothers immigrated to America.

My father’s parents moved from Russia to Paris before coming to the United States. Among the papers is a yellowed French immigration document signed by my grandfather on March 13, 1913; there he spells his last name Karoltchouk. On my grandmother’s “Permis de sejour a un etranger,” issued in Paris in 1914, it’s spelled Karolchouk. A cursory web search locates Jews with variations like Korolczuk and Karolchuk, which I am told is a common Polish surname.

My father was always ambivalent about his last name. His uncle was probably right that a deracinated name like Carroll made it easier for a family of Polish Jewish immigrants trying to gain a foothold in America (although my dad’s parents didn’t quite get the memo in naming my father Irving). On the other hand, Dad always felt the name suggested that he was trying to hide something or pretend to be something he was not.

The dilemmas of Jewish name-changing form a powerful chapter in novelist Dara Horn’s new collection of essays. “People Love Dead Jews” is an examination – deeply reported, at times brilliant and often bitter – on the persistent hatred aimed at Jews, even in their absence. A recurring theme of the book is the way antisemites, philosemites and Jews themselves rewrite and distort the past, and how Jewish identity is “defined and determined by the opinions and projections of others.”

Our last names are a case in point. Horn explodes the old myth that Jews’ names were changed at Ellis Island by clerks too lazy or malevolent to spell them right. In public lectures and a 2014 essay, Horn would explain that “nobody at Ellis Island ever wrote down immigrants’ names.” Instead, she’d cite works like Kirsten Fermaglich’s “A Rosenberg by Any Other Name,” a deep dive into the data showing the “heartbreaking reality” of Jewish immigrants changing their own names “because they cannot find a job, or because their children are being humiliated or discriminated against at school, or because with their real names, no one will hire them for any white-collar position.” Genealogists like Jennifer Mendelsohn and Philip Sutton and Ellis Island officials like Peter Urban have confirmed this over the years.

What Horn didn’t count on was the anger of her audiences, who insisted that their grandparents and great-grandparents were passive victims of a clerk’s pen. Horn explains this denial as a “deep pattern in Jewish history,” which is “all about living in places where you are utterly vulnerable and cannot admit it.” Instead of fessing up to that vulnerability and their culpability in bowing to it, many Jews prefer to invent more benign “origin stories,” either to exonerate their non-Jewish neighbors or spare themselves and their children the “humiliation” that the new country is no more friendly to Jews than the one they left. If Jews were to tell the truth about why Karolchouk became Carroll, or (in my mother’s case) Greenberg became Green, they’d be “confirming two enormous fears: first, that this country doesn’t really accept you, and second, that the best way to survive and thrive is to dump any outward sign of your Jewish identity, and symbolically cut that cord that goes back to Mount Sinai.”

Horn ends up saluting the “enormous emotional resources” displayed by the Jews who cling to the Ellis Island myth, but I felt hers is an overly harsh assessment of the survival strategies employed out of necessity by a previous generation of Jews. I can’t prove that my great-uncle and his brothers weren’t humiliated by the name change, but I am guessing that it went down easier than Horn imagines. A new country, a new language, a new alphabet. So much was lost in translation. I think given the choice between the misery they left behind in the Old Country and the opportunities available to them even in an intolerant America, their generation felt losing the last name was a palatable tradeoff.

History bears out their choice. Within a generation or two, the name-changers’ children were able to assert their Jewishness in countless ways. The prosperity that came with “passing” allowed them to build public Jewish lives, worship as they chose and climb the ladder of success unthwarted by the twisted imaginations of antisemites. Having achieved success, these Jews would build forward-facing Jewish institutions, proudly attach their names to dormitories and concert halls, and send their children to Jewish day schools without fear that they would be denied admission to the top universities.

Horn’s book, by contrast, is haunted by the killings of Jews in Pittsburgh, Poway and Jersey City, but those attacks remain the exceptions. Despite the beefed-up security at American synagogues in the wake of 9/11, and the renewed feelings of vulnerability they instilled, those attacks don’t reflect the lived reality of most American Jews 100 years removed from Ellis Island.

Jewish survival and adaptation have often depended on shape shifting, from first-century Yavneh to 20th-century Tel Aviv, when Jews like David Grün and Goldie Myerson traded one kind of Jewish name for another. Besides, what we consider “Jewish” last names are often themselves “un-Jewish” place names and occupations, adopted after state legislation in Yiddish-speaking lands required hereditary names instead of the patronymics the Jews had been using. They certainly didn’t go back to Sinai.

Name changing wasn’t a humiliation but a strategy, and one that, in the American context, has paid off handsomely.

Like my dad, I sometimes wish our last name sounded more Jewish. I fret that Carroll undercuts what little authority I have as a “public” Jew, or reinforces my own occasional feelings of inauthenticity (which I define as “not having gone to Jewish summer camp”). But of course, to even think of reclaiming a “Jewish” name is a privilege that would have been unimaginable to so many Jews living in truly hostile lands. And the notion of what is and isn’t a “Jewish” name is itself being complicated – and enriched — by conversion, interfaith marriage and all the other factors that have diversified the Jewish community in recent years.

Still, as Horn wrote in her original article about the Ellis Island myth, the internet has become a “toxic sea” of antisemitic misinformation, and “that makes it all the more important to get Jewish history right.” We should all recognize the Ellis Island story for the myth that it is, and embrace the real stories of courage and adaptation that brought us to this place and time.

Andrew Silow-Carroll
is editor in chief of The New York Jewish Week and senior editor of the Jewish Telegraphic Agency.
The views and opinions expressed in this article are those of the author and do not necessarily reflect the views of NYJW or its parent company, 70 Faces Media.