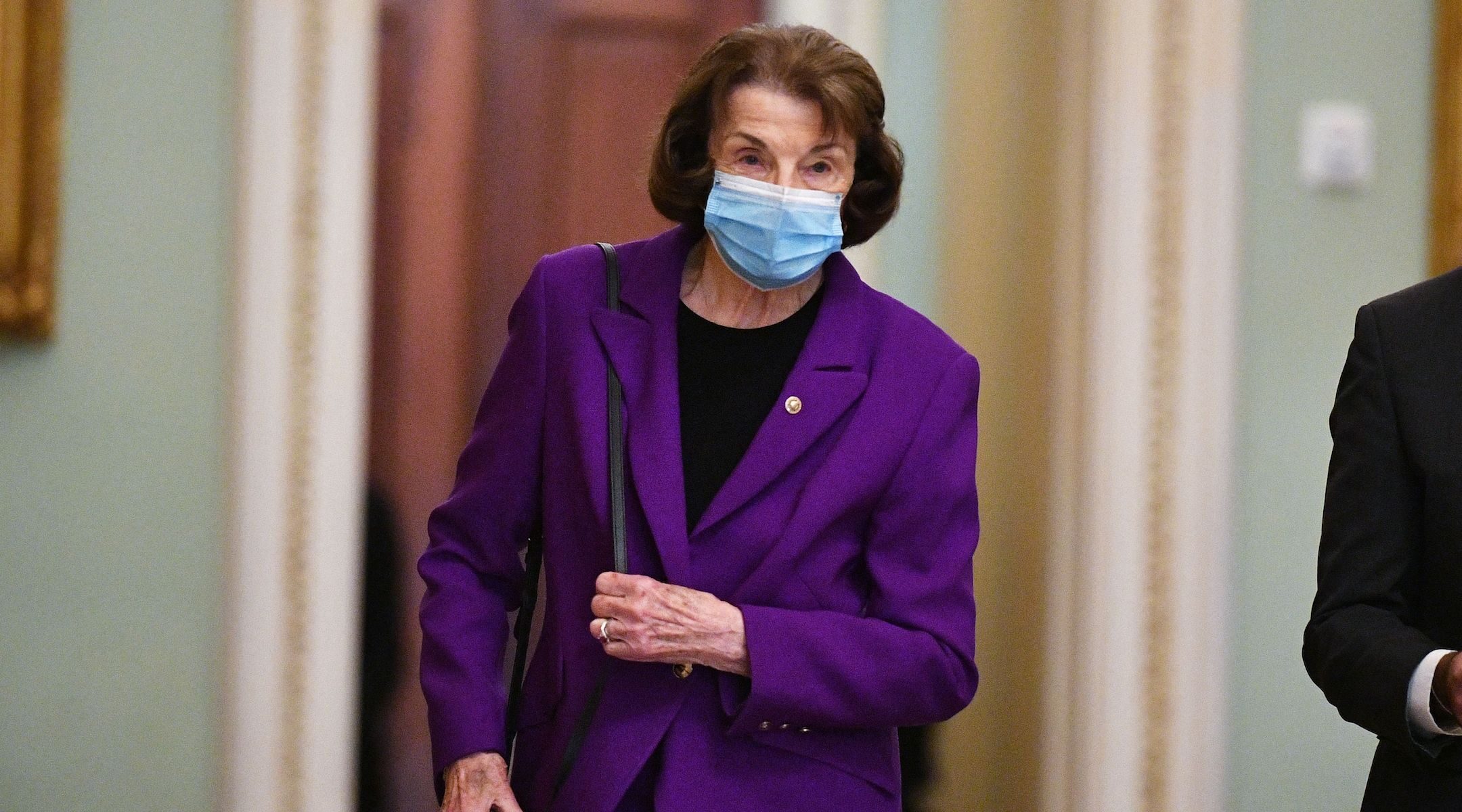 (JTA) — Democratic California Gov. Gavin Newsom easily survived a recall election Tuesday, putting to end the possibility that a right-wing Republican could take over as the state’s top executive. But one effect of the bruising political fight appears likely to endure: scrutiny over whether America’s first Jewish woman senator is still fit to serve.

Sen. Dianne Feinstein’s name was not on the ballot, but in some ways the election was about who should replace her.

Feinstein is 88 and, according to some reports, increasingly infirm. Her current term extends until 2024, but if she is unable to complete it, the state’s governor would pick her replacement.

That made the recall mechanism an attractive tool for Republicans who would like to see the currently divided Senate swing to Republican control. California law gives citizens the right to recall their governors — and mandates that if a majority of voters back recall, the top vote-getter in a simultaneous election is the replacement.

There were dozens of candidates on the ballot Tuesday, but many Republicans threw their efforts behind Larry Elder, a talk radio host who backs former President Donald Trump. He is far more conservative than any of the Republican governors California voters have elected in the past, and the election was seen as an indicator of how responsive Californians are to Trump-style politicians.

Elder received nearly half of the votes counted by Wednesday morning, far more than any other candidate, but his campaign was rendered moot when it became clear that Democrats throughout the state had turned out in droves to block the recall effort. Only about a third of voters are projected to have supported the recall.

The result removes any risk that Democrats might pressure Feinstein to step down immediately, as might have been the case if Newsom had been recalled and given only 30 more days in office. Still, the episode made prominent the stakes around persistent questions about her ability to continue to serve, which grew last year when she made a series of missteps during high-profile hearings about regulating social media companies and confirming a Supreme Court justice. Even some of her friends and former staffers say her short-term memory has grown so poor that she cannot effectively do her job, according to a 2020 article in the New Yorker.

Feinstein — who was born in San Francisco as the granddaughter of Jewish immigrants from Eastern Europe and, like Newsom, a former mayor of that city — is hardly the oldest senator to serve. That distinction went to Republican Strom Thurmond of South Carolina, who was 100 when he completed his final term in 2003. (He died six months later.)

But Feinstein became the country’s first Jewish woman to serve in the Senate in 1992, when she filled a vacancy immediately after she was elected. (Barbara Boxer, also from California and victorious in the same election, became the second Jewish woman in the Senate weeks later, when her term began on the regular schedule.) Feinstein’s current term goes through 2024, when she would be 91.

After last fall’s elections, Feinstein stepped down as the top Democrat on the prestigious Senate Judiciary Committee, in part for the criticism she received in her party for her handling of the Justice Amy Coney Barrett hearings.

“If Sen. Feinstein were to call me today and asked my advice, I would say only you can decide,” she said. “But from my perspective, I want you to know I’ve had very productive years away from the Senate doing good things. So put that into the equation.”