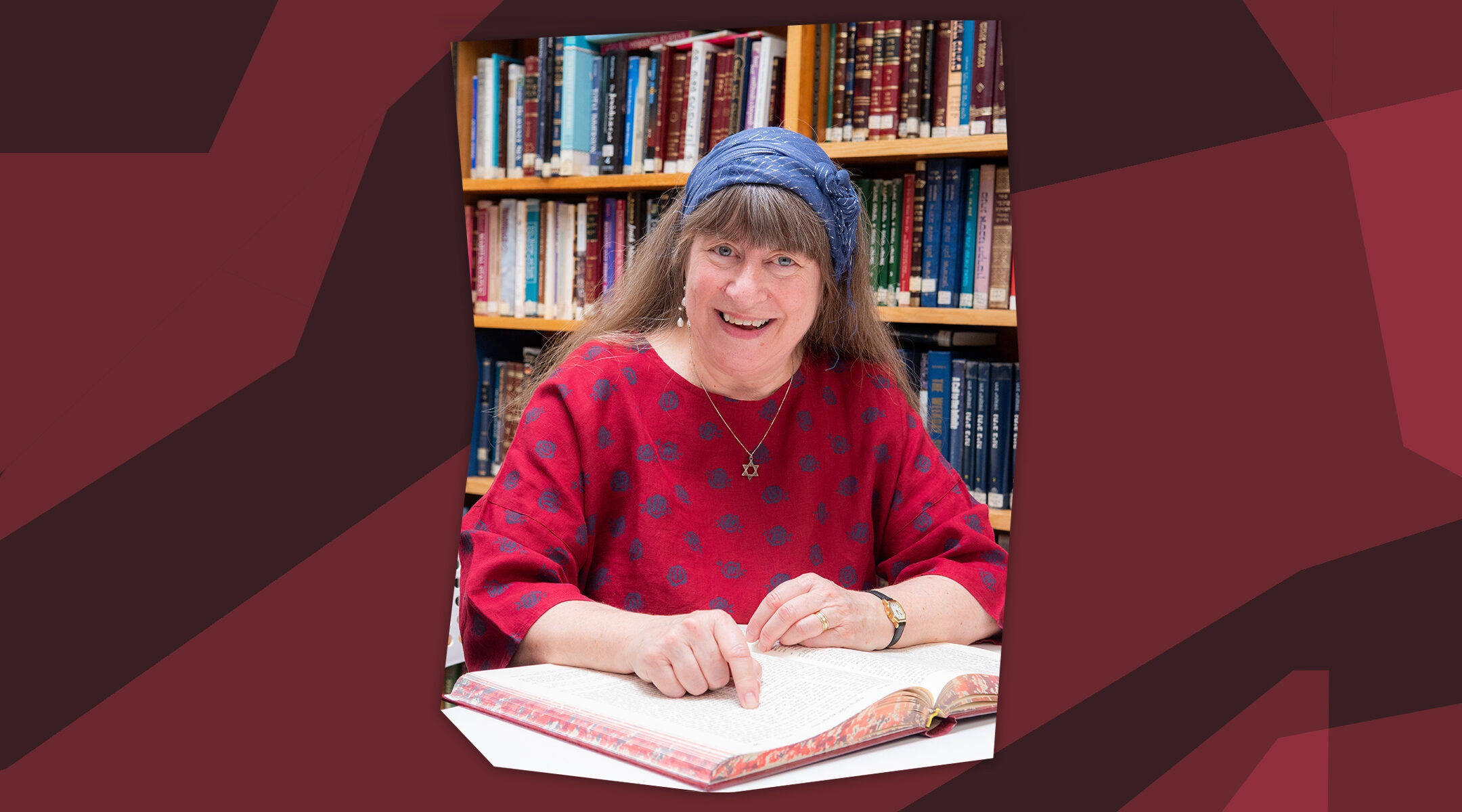 LONDON (JTA) — Lindsey Taylor-Guthartz was a teenager when she began to feel Judaism calling her back. Her family had left the synagogue behind, and in the mid-1970s she was living in Cornwall, about as far away from Britain’s Jewish centers as one can.

She wrote letters to Jewish institutions and asked them to send her pamphlets. She pored over Jewish entries in the thin pages of an Encyclopedia Britannica. She began deciphering unfamiliar words and learning about Israel. She couldn’t yet visualize all the traditions, and there were things that she knew weren’t in the books – for the moment “everything was theoretical.”

Theory became practice at Cambridge University, where Taylor-Guthartz would attend synagogue and learn Hebrew. She would eventually live in Israel. She went on to teach at the London School of Jewish Studies, or LSJS, which is associated with the United Synagogue — roughly equivalent to the Modern Orthodox movement in the United States.

Taylor-Guthartz, now 62, burst onto the agenda of Britain’s Jewish community after being ordained in June by New York’s Yeshivat Maharat. The egalitarian “Open Orthodox” yeshiva is where other women like her in Britain go for what the seminary calls a “traditional Orthodox semikha [ordination] curriculum” for women. Graduates choose their own titles, and Taylor-Guthartz chose “rabba.”

Britain’s traditionalist Orthodox establishment reacted quickly, sacking Taylor-Guthartz from her teaching position at LSJS, where she had been for 16 years. Her research fellowship at the school was similarly revoked.

That might have been the end of it, but something unusual happened: A senior research fellow at the school resigned in protest, donors threatened to take their money elsewhere, community figures wrote critical opinion pieces in communal newspapers and many people spoke angrily behind closed doors.

The controversy has kickstarted a conversation about how far British Orthodoxy is willing – or able – to adapt to women who want to see it move in a more egalitarian direction.

A letter signed by 30 Liberal and Reform rabbis accused the United Kingdom’s chief rabbi of maintaining a “glass ceiling of Torah above which half your community may not ascend.” Taylor-Guthartz was even given a hearing on the BBC’s flagship women’s issues radio program “Woman’s Hour.”

The establishment backed down. Her teaching roles were restored — but only after a compromise in which she agreed not to use the rabba title.

“For all the protestation that nothing had changed,” she told the Jewish Telegraphic Agency, “something has changed.”

Some suggested that Chief Rabbi Ephraim Mirvis, spiritual leader of United Synagogue as well as president of LSJS, was worried how more conservative elements of the Jewish community both at home and abroad would react if he were to permit a female rabbi to teach at a college under his watch.

Like Chief Rabbi Jonathan Sacks before him, Mirvis is squeezed between the liberals and the increasingly assertive haredi Orthodox community that is growing in numbers and influence.

Others wrote letters supporting Mirvis, saying he was was holding the line in support of a position that is widely accepted across a range of Orthodox streams. Yeshivat Maharat’s graduates have found positions within the Orthodox world, but seldom in roles that would conflict with the notion that only men may serve as congregational rabbis or ordained clergy. In 2015, the Modern Orthodox Rabbinic Council of America ruled that Orthodox institutions may not “allow a title implying rabbinic ordination to be used by a teacher of Limudei Kodesh [Jewish studies] in an Orthodox institution.”

“The title of rabbi today connotes the leader of a community in a synagogal context,” she explained. “That’s problematic to Orthodoxy, it’s always going to be, because the synagogue is built as the place for male prayer. Women and men have different roles in prayer, different expressions of prayer.”

Binstock’s title indicates that she is the wife of the rabbi at St John’s Wood, where she serves as an educator and program director in her own right.

“We don’t believe that equality is sameness,” she said. “Judaism celebrates difference, and we have many different roles.”

Others noted that Rabbanit Shira Marili Mirvis, the wife of the chief rabbi’s nephew, in April became the first woman to be appointed – albeit not under the formal title rabbi – as the spiritual and halakhic, or Jewish legal, authority of an Orthodox community in Israel.

Taylor-Guthartz says Britain lags “10 to 15 years behind Israel and the United States.”

“We’re a small provincial community in comparison,” she told JTA in a Zoom interview. “We’re very old-fashioned. We’re very conservative. We preserve a conservativeness that I think as characteristic of Britain in the 1950s, but which Britain has grown out of. Britain has moved on, but the Jewish community preserves it.”

She is hoping to change that.

Taylor-Guthartz, who during her time in Israel attended an egalitarian Orthodox synagogue that prided itself on a decentralized and democratic model, said she experienced culture shock when she came back to Britain in 1998.

“The London communities just seemed odd to me,” she said. “They were all very frightened of things. I wasn’t used to this.”

Taylor-Guthartz talks about female pioneers who came before her, and friends encouraged her to think about investigating Maharat. She talks about her dissertation on Orthodox women for her doctorate at University College London, which has recently been published.

But there is one story that jumps out to her: Shortly after she had returned to Britain, a Jewish woman came up to her and asked: “‘Can I pray in my own words, and can I pray outside the synagogue?’”

“I thought it was devastatingly sad,” she said. “Even before I got ordained, I was already being asked questions by people who didn’t feel comfortable going to their rabbi for one reason or another: Either they were asking something that was a bit out of the box, or for whatever reason didn’t feel they could ask somebody.

“It’s very important that there are women who are resources for other women.”

The United Synagogue movement has taken a hard stance against allowing women to take on rabbinic posts, even as Britain’s progressive denominations have had female clergy since the 1970s. Because of that, United Synagogue has been accused of lagging behind other mainstream denominations and wider society in opening itself up to women. The organization only allowed women to become trustees in 2014 after opening synagogue chairmanships to them two years earlier.

“It is such a lumbering, prehistoric beast,” Taylor-Guthartz said. “I don’t know if it can adapt. It has tried, but it is always playing catch-up.”

Still, she is optimistic.

“I think the community is way ahead of its leaders here,” she said. “They are getting a bit impatient, and it just seems ridiculous to many people that you can have top judges and top doctors sitting silently in shul where they can’t say anything.”

Taylor-Guthartz says the communal reaction to her firing from LSJS proves her point.

‘What surprised me, and what I think is really significant about what happened, is the amount of solidly centrist United Synagogue people that stood up and said this is not OK, this is ridiculous, this is crazy,” she said.

Britain’s most recognizable Reform and Liberal Jewish figures, such as Rabbis Julia Neuberger, Laura Janner Klausner and Charley Baginsky, are all women. By contrast, Britain’s Orthodox women are “invisible both inside and outside the community,” Taylor-Guthartz said.

“A lot of people are very angry and a lot of people have left. There is a silent drain of people because they feel unwanted, unheard, disrespected,” she said.