Actor Moe Jeudy-Lamour really needs to get his Star of David necklace repaired. One day, he took it off, accidentally yanking the chain, and it broke. So, on our Zoom just after the Jewish New Year, he’s wearing a different necklace: one that has a silver “chai” charm dangling — chai, or חַי‎, being the Hebrew word for life.

“The funny thing is I don’t like jewelry,” Jeudy-Lamour explains. “But those are the two things that I wear. I’ve had them for maybe 10 years. And really, it’s part of who I am — it’s part of my identity.”

Jeudy-Lamour, has a global identity: He’s a Haitian Canadian Jew who lives in Los Angeles and works in London, Toronto and around the world. “It sounds very cliche and pretentious, but it feels better when I say that I’m just a citizen of the world.”

He was raised in Montreal to parents from Haiti and is fluent in English, French and Creole. His mother converted to Judaism when he was little — so young he doesn’t remember ever not being Jewish — and he grew up Shabbat observant, with Saturdays spent in a synagogue where no one else looked like him and his brother. But we’ll get to all that later, because first we need to talk about “Ted Lasso.”

Jeudy-Lamour’s journey to his role on “Ted Lasso” could be traced back to when he started acting professionally in 2011, but really, it started with his role in “Race,” a Jesse Owens biopic focusing on the Black athlete’s decision to compete in the 1936 Olympics in Nazi Germany. Jeudy-Lamour plays Mel Walker, Owens’ Ohio State teammate. “Race” was released in 2016, filmed in 2014 in Montreal — and was the start of his friendship with Jason Sudeikis, a connection that would change the course of his acting career. (In “Race,” Sudeikis plays track and field coach Larry Snyder.)

“I’ve been friends with Jason for seven years,” Jeudy-Lamour says, dating back to the filming of “Race.” “It’s thanks to Montreal that our friendship began. I showed him around the city; I showed him my friends and how cool the city is, and all of that. And then we stayed in touch. When I moved to LA, I saw him at a play. And [he told me], ‘Oh, I’m filming this TV show soon in London and it’d be cool to have you.’ So I auditioned for it, and then got to be in London for a few months. It was amazing.” 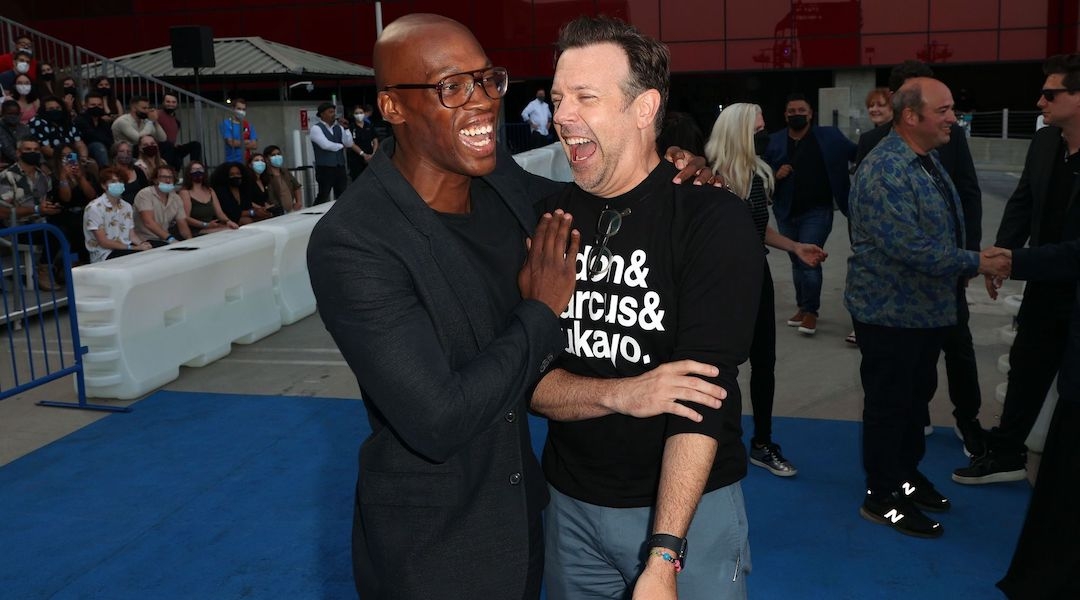 That “TV show in London” turned out to be “Ted Lasso,” the feel-good smash hit comedy about an American football coach trying to make it as a British football (aka soccer) coach for AFC Richmond, which is currently airing its second season. Jeudy-Lamour portrays goalkeeper Thierry Zoreaux.

Zoreaux is, thanks to Jeudy-Lamour, a French Canadian athlete who is likely also Haitian and Jewish, though that hasn’t come up on screen yet. Zoreaux, AFC Richmond’s goalkeeper, is present in all the main scenes with the team, though he doesn’t have his own storyline (yet). Nonetheless, Thierry Zorreaux has an entire wiki about him before there’s even a Wikipedia page on Jeudy-Lamour himself.

Jeudy-Lamour’s mom, who still lives in Montreal, doesn’t watch the show — she doesn’t have Apple TV+, nor does she speak English. But he tells me, with a big smile, “Every time it’s on the news or something like that, she’ll send me the clippings.”

The “Ted Lasso” writers encourage their actors to bring themselves into their roles. So, when in episode 10 of season one, the players suggest names for trick plays, Zoreaux, a proud Québécois resident, adds: “Midnight Poutine!” Coach Lasso (Sudeikis) replies, “Poutine?” and his assistant Coach Beard (Brendan Hunt), replies, “That’s not dirty, it’s just super Canadian.”

What trick does Coach Lasso have up his sleeve for the last match of the season? Watch the season finale of @TedLasso now on Apple TV+ https://t.co/uzBBajEqqh pic.twitter.com/npmUr6gbik

In season two’s Christmas episode, Zoreaux brings poutine to the team’s potluck holiday dinner, calling back to the season one play.

“With the poutine, it was definitely a thing that happened to bring [more of] myself to the role. But apart from that, we haven’t really touched on the other stuff yet, like my Haitian or my Jewish [identities]. In the Christmas episode, we talked about maybe bringing a Jewish dish, but it didn’t really work out; they went with poutine,” he said.

Still, his Jewish identity is clearly important to him and something that has shifted throughout various stages of his life. “There’s Jewish, the culture, and then Jewish, the religion. When I was younger, it was hard to get into the culture because I’m Black. Going to the synagogue, it was always my brother and me, alone together.”

Jeudy-Lamour, his brother and their mom attended an Ashkenazi Orthodox synagogue in Montreal, where their mom sat in the women’s section and the brothers sat alone.

As he got older, he made Jewish friends who weren’t Orthodox, and one weekend, he went to a Reform synagogue. Jeudy-Lamour remembers, “That was like, oh my God. We were sitting with his entire family. It was just all us! I [thought], that’s so cool. It’s so different.”

The pull of observing Shabbat decreased as he got older and had the ability to decide for himself his own practice.

“For 10 years, we were like shomer Shabbat, we were super into it. Then you get older and you’re like… but my other friends are going to the park and playing video games on Saturdays,” he said. “You become your own person. And you have to make your own choices and see what you want to do.”

Since moving to Los Angeles, however, he’s begun reconnecting with Jewish observance. His neighbors happen to be Israeli; they do Shabbat together, and recently all celebrated the first night of Rosh Hashanah. For Jeudy-Lamour, who was raised Ashkenazi, he has been loving their Sephardi food.

Meanwhile, Jeudy-Lamour continues to build his own community — whatever that looks like in 2021. The “Ted Lasso” cast, especially the actors who comprise the AFC Richmond squad, have grown close over the course of filming. They play the FIFA soccer video game “almost every weekend” and have a group chat that’s always popping.

He has the fondest memories of filming the eighth episode of the current season, “Man City.” In a pivotal scene, the team gathers in the locker room as team captain Isaac (Kola Bokinni) gives Sam (Toheeb Jimoh) a haircut. 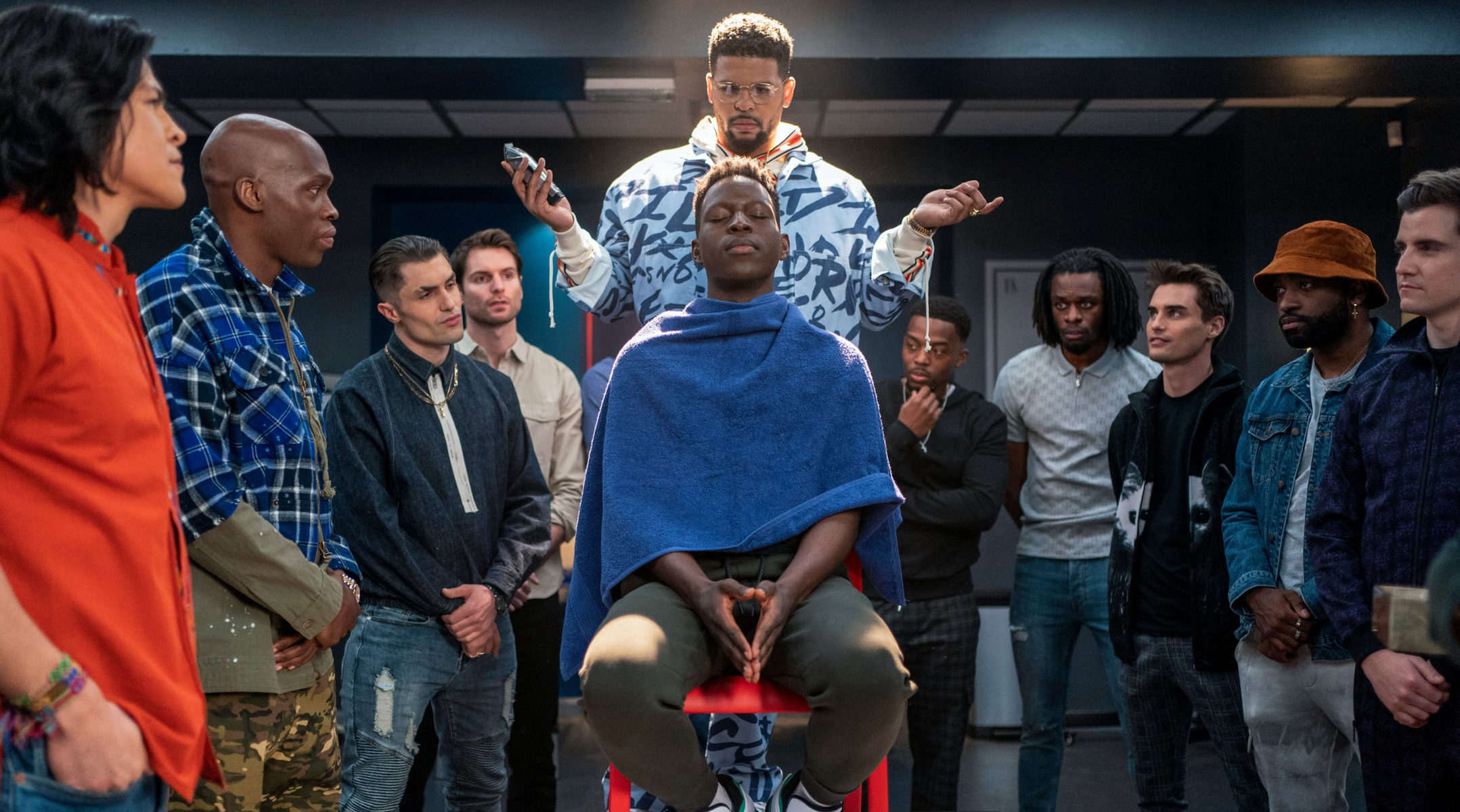 A still from “Man City.” In center, Toheeb Jimoh and Kola Bokinni. Moe Jeudy-Lamour is second from left. (Apple TV+)

“Episode eight, we all had the most fun shooting. It’s a special moment when it’s just the players, because it’s such a big show. But then it’s just us — joking, roasting each other and stuff like that. There’s a real sense of camaraderie.”

As actors who portray a soccer team, one would think they’d bring a love of soccer to the show. Yet for Jeudy-Lamour, growing up in Montreal, he never played soccer; as a teenager, he played American football for a time as a wide receiver, but never got very into athletics.

“When Jason [told me], ‘Maybe you’ll be the goalkeeper since you’ve never played,’ I was like, ‘Nah, I think being a striker would be more fun, you know, running around.’ And he looked at me and was like, ‘Trust me, man. You’re older. You want to be the goalkeeper.’ I was like, ‘eh, OK,’” Jeudy-Lamour said. “Now I get it. It’s so much better. I’m just hanging out in my corner, I’m chillin’ and I see all the guys running around. I’m like, yeah, I’d rather be where I’m at.”

As a byproduct of being on a TV show about soccer, he’s started attending Los Angeles FC (LAFC) games. “I’ve become a fan of LAFC, they’re my team, I root for them. But every time that I’m at the game and the opposing goalkeeper does a nice save, I have to cheer. I’m a fan of goalkeepers now: That’s my thing. I’ll always watch them.”

We’ll be cheering for Jeudy-Lamour.