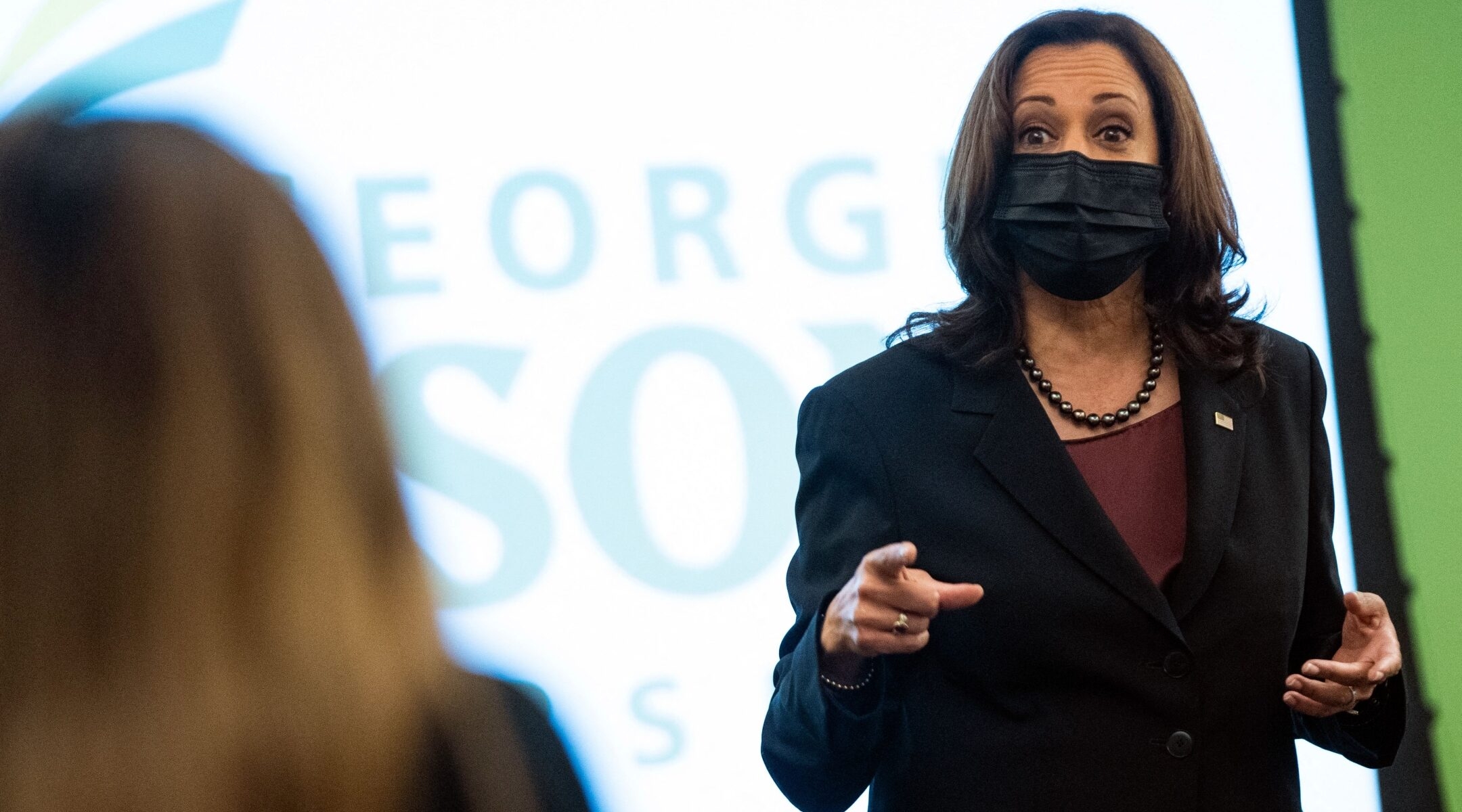 WASHINGTON (JTA) — Vice President Kamala Harris “strongly disagrees” with a university student who told her that Israel was carrying out “ethnic genocide,” her office said, pushing back against claims that she encouraged the student’s view.

“Throughout her career, the Vice President has been unwavering in her commitment to Israel and to Israel’s security,” Harris’s spokeswoman, Symone Sanders, said Friday in a statement to the Jewish Telegraphic Agency. “While visiting George Mason University to discuss voting rights, a student voiced a personal opinion during a political science class. The Vice President strongly disagrees with the student’s characterization of Israel.”

Harris had reached out to Jewish organizations after sustaining criticism from Republicans and some Jewish communal figures for not correcting the student during a visit to a political science class. Harris was on the campus Tuesday to attend a voting rights rally.

Harris spoke for about 15 minutes to the class about the importance of organizing and making one’s voice heard, tying it to Democratic Party efforts to push back against a spate of laws in Republican-led states that add restrictions to voting.

“Your vote is an expression of your voice, and we should never support anything that would stifle a person’s voice,” Harris said.

She took questions, and one woman, who said she was Yemeni and Iranian, challenged Harris’ claim that speaking out brings change.

“You brought up how the power of the people and demonstrations and organizing is very valuable in America, but I see that over the summer there have been protests and demonstrations in astronomical numbers standing with Palestine,” she said. “But then just a few days ago there were funds allocated to continue backing Israel, which hurts my heart because it’s ethnic genocide and displacement of people, the same that happened in America, and I’m sure you’re aware of this.”

The woman appeared to be referring to protests in May during Israel’s conflict with Gaza, and then to the U.S. House of Representatives’ overwhelming approval last week of $1 billion to replenish Israel’s Iron Dome anti-missile system, which was depleted during the conflict.

“The people have spoken very often of what they do need and I feel there is a lack of listening,” the student said.

Harris said she was glad the student spoke up, saying, “your voice, your perspective, your experience, your truth should not be suppressed.”

The vice president then pushed back against the student’s argument that expressing opinions in America was fruitless.

“The point that you are making about policy that relates to Middle East policy, foreign policy, we still have healthy debates in our country about what is the right path, and nobody’s voice should be suppressed on that,” she said.

Harris said that organizing and voting were effective means of making one’s voice heard, casting the students’ views as part of a broader debate. “Our goal should be unity, but not uniformity, right?” she said. “Unity should never be at the expense of telling anyone personally that, for the sake of unity, ‘Oh, you be quiet about that thing. You suppress that thing. Let’s not deal with that thing.’ That’s not unity. True unity is everyone in that room has a voice.”

The Republican National Committee posted an excerpt of the exchange, cutting off at where Harris said “your truth should not be suppressed.”

Rabbi David Wolpe of Sinai Temple in Los Angeles, in Harris’ home sate of California, chided her on Twitter.

“Madame Vice President, the idea that Israel has committed genocide against the Palestinians is not someone’s truth, it is someone’s lie, whether they know it or not,” he said. “And it is pernicious, destructive and should not be elided or ignored by the highest officials in the land.”

Harris’s office reached out to at least two pro-Israel organizations in the wake of the controversy.

“The Biden-Harris Administration, as well as President Biden and Vice President Harris personally, have exemplary pro-Israel records, for which we are immensely grateful,”  Mark Mellman, the president of the Democratic Majority for Israel, said in a statement. “We were pleased Vice President Harris’s senior staff reached out to us today to confirm what we already knew: Her ‘commitment to Israel’s security is ironclad,’ and she ‘strongly disagrees with the George Mason student’s characterization of Israel.’”

“Just spoke with @VP office,” he said. “Glad to hear her confirm she is proud of her record supporting #Israel, and knows claim it is committing ‘ethnic genocide’ is patently false. Looking fwd to a clearing of the record so there’s no ambiguity that what that student said was hateful/wrong.”