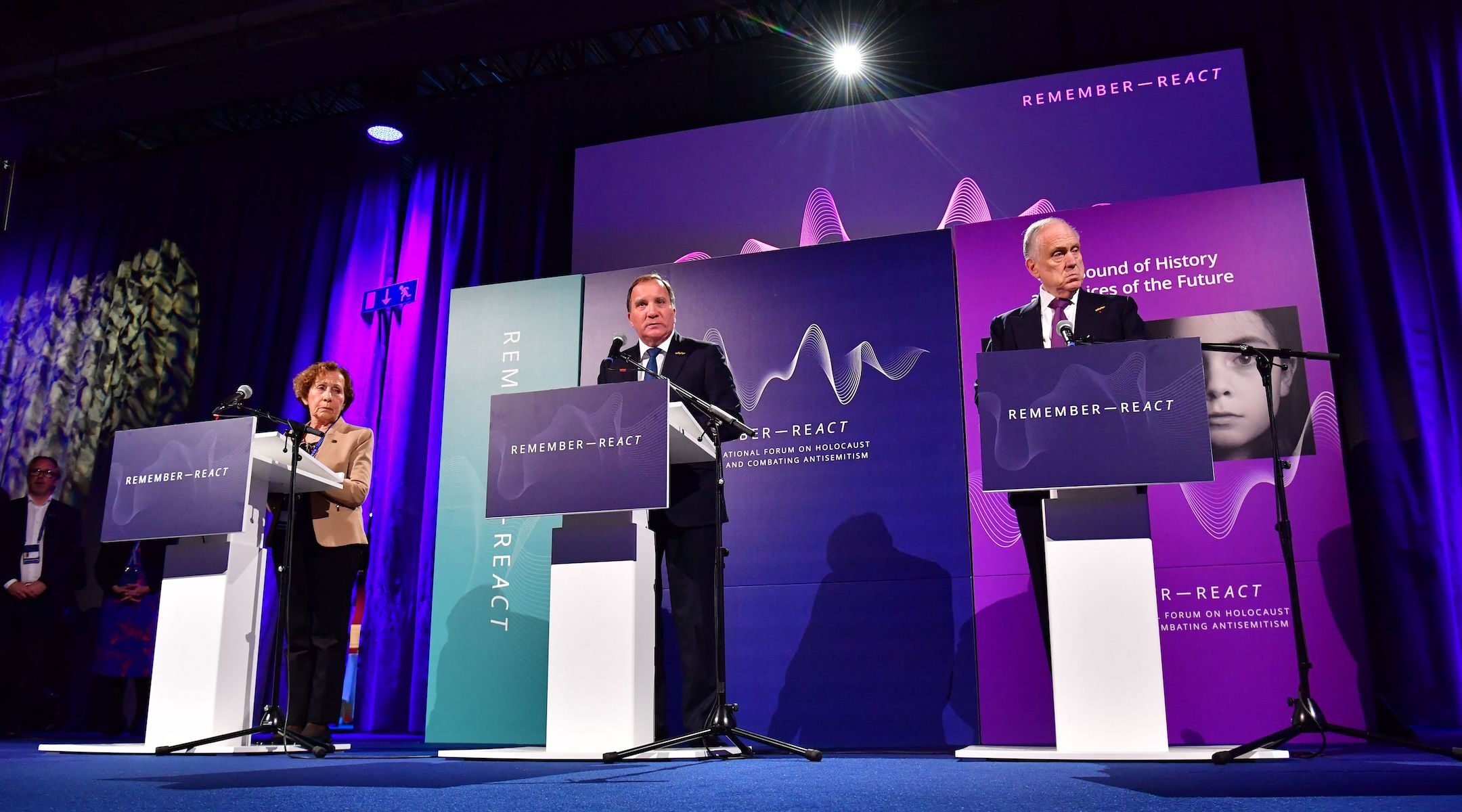 With around one third of its inhabitants born outside of Sweden, many of them often living in ethnically homogenous neighbourhoods, the city has also become a synonym for Sweden’s integration problems.

But this week, Malmö — and by extension, Sweden’s government — aimed to turn that reputation on its head with a conference about combating antisemitism attended in person or on video by nearly 50 heads of state, foreign government ministers, European Union officials and World Jewish Congress representatives. U.S. Secretary of State Antony Blinken, Israeli President Isaac Herzog and French President Emmanuel Macron sent in video messages.

YouTube, led by Jewish CEO Susan Wojcicki, pledged over $5 million to nonprofits and government entities to fight online antisemitism. Facebook’s COO Sheryl Sandberg, meanwhile, who has spoken publicly about how her Jewish ancestors escaped persecution in Europe to the United States, joined live by video, and said her company is devoted to meticulous reviewing of its users’ content — despite its past issues with moderation on the topic.

Unlike in other similar conferences on the subject, The Malmö International Forum on Holocaust Remembrance and Combating Antisemitism did not end with a joint declaration signed by all of its attendees. Swedish Prime Minister Stefan Löfven said he preferred the leaders present to focus on discussing “concrete measures” that can be used to curb antisemitic incidents and behavior.

​​“We are not looking for another declaration, we are looking to translate these principles of these documents into reality,” Löfven, who is leaving his office next month, said in a speech Wednesday.

If and how the conference serves as a turning point for the country’s on-the-ground antisemitism problem remains to be seen. While the heads of state held the spotlight, Swedish media reports in recent weeks have told stories of the local Jews who are continuing to leave Malmö, some after suffering antisemitism directly in their daily lives.

“You can hold your nice speeches, we’re moving while you’re doing it,” the mother of a 12-year-old Jewish girl told Sweden’s newspaper Dagens Nyheter. Her daughter described how she had found graffiti reading “Free Palestine” and “F–k Israel” by her school locker, and how someone spit on her jacket. It has proven too much for the girl’s mother, who is relocating their family to Israel next summer, despite not speaking any Hebrew.

That story is not unique — all of the Swedish Jewish students interviewed in a survey published by the City of Malmö earlier this year said they had been exposed to some form of antisemitism at school.

The problem extends far beyond the classroom. In 2017, the Malmö synagogue’s windows were shattered with stones. In 2020, the city had to suspend its partnership with the Arab Book Fair, as an antisemitic book appeared on its website (the title has subsequently been removed).

But it was perhaps an experiment conducted in 2015 by a Swedish journalist that drew the most attention to the situation. The reporter, wearing a kippah and a Star of David pendant, was verbally and physically attacked while walking through various Malmö neighborhoods.

In Malmö and beyond, Swedish Jews have felt caught between different streams of antisemitism — from both radicalized Muslim immigrants and neo-Nazi movements. 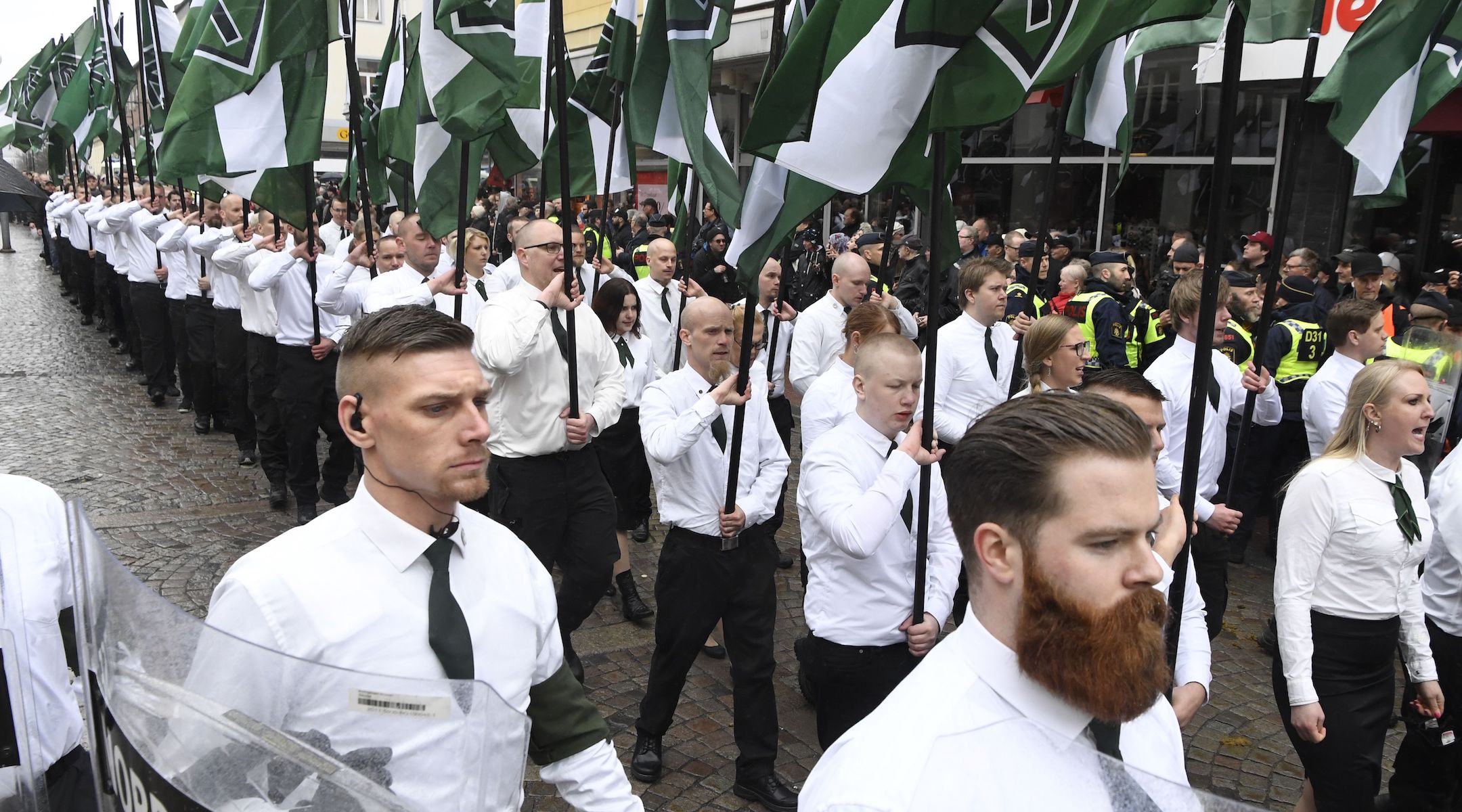 Members of the far-right Nordic Resistance Movement march through the town of Ludvika, central Sweden, on May 1, 2018. (Ulf Palm/AFP via Getty Images)

“Yes, you are taking a risk when you walk around with a Star of David,” Frederik Sieradzki, the spokesman for the Jewish Community of Malmö organization, told the Jewish Telegraphic Agency in an interview before the conference. In 2019, in the wake of a report on the city’s declining Jewish population, he told JTA that his Jewish community could disappear entirely by 2029.

But Sieradzki struck a more optimistic tone in talking about this week’s conference. The community, he said, is forging closer ties to Katrin Stjernfeldt Jammeh, Malmö’s mayor since 2013, who detailed plans to “create better conditions” for Jews in the city in an interview with Haaretz before the conference.

“We’ve been working with the Jewish community in several ways to map the problem, to create an understanding of the problem and, today, we have a long-term commitment. We’re investing more than 2 million Euros ($2.3 million) over four years,” she said. “We’re also working within our school system, mapping the problem there too, and creating different ways to prevent prejudice.”

Sieradzki confirmed that within the last 20 years, the number of Jews in the city has been halved, to approximately 500 members today. But he was careful in drawing cause and effect conclusions, and emphasized that the fear and experience of antisemitism is not the only factor driving the numbers down. Younger generations have better career opportunities in Stockholm, and also more ways of engaging in religious life; older people move to the cities where their children and grandchildren live; many older members of the Malmö community, among them Holocaust survivors, die out over time.

Even those who decide to leave for Israel point to multiple reasons for their moves, he said. And Sieradzki has noticed that in the past two years, the curve has flattened, and the number of Community organization members has remained practically unchanged. He takes that as a good sign.

During an event held before the conference celebrating Jewish life in Sweden, Ronald Lauder, the head of the World Jewish Congress and a prominent Republican donor, spoke of another factor that has been a flashpoint in the country for decades: the harsh criticism of Israel common in Swedish society and government. 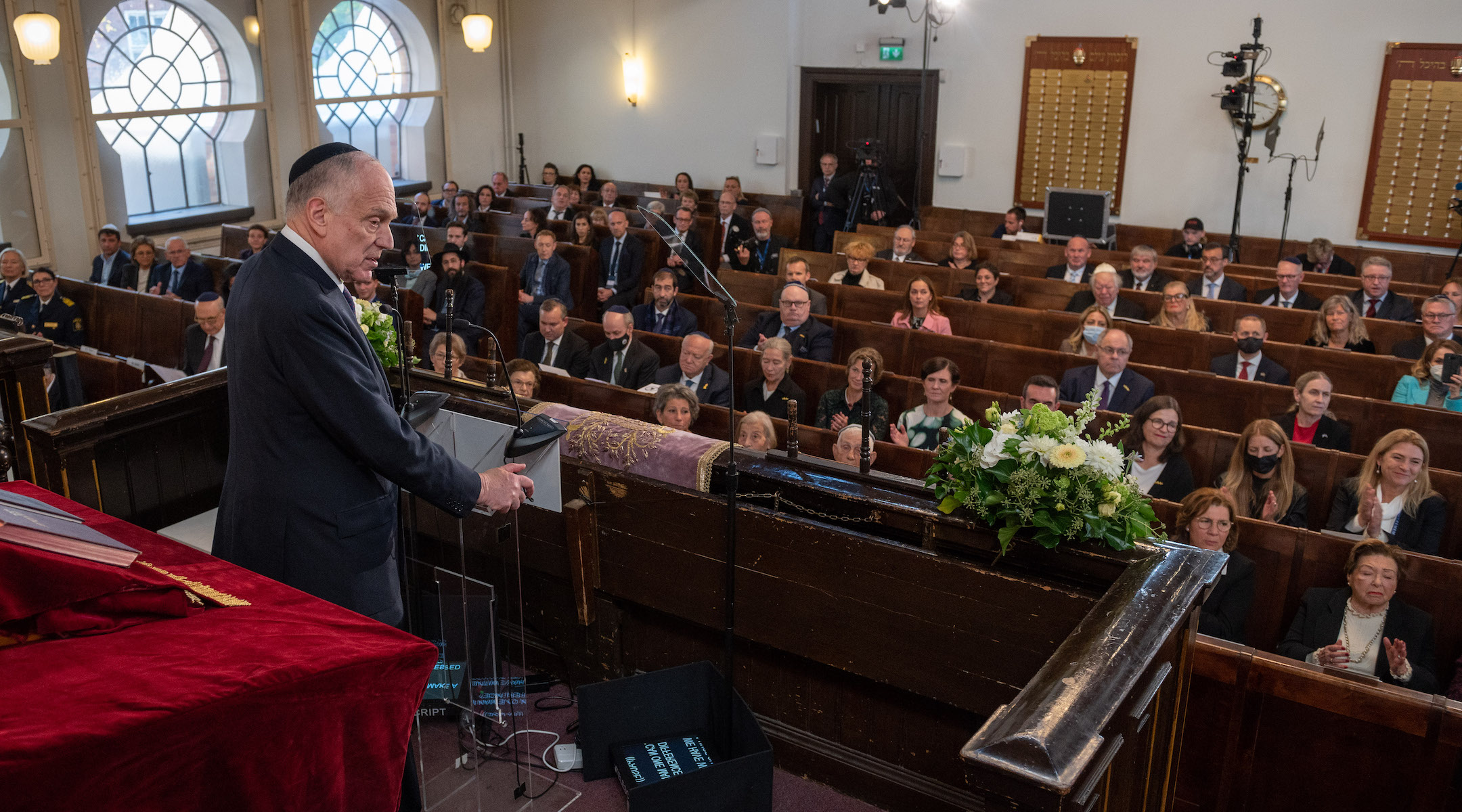 Speaking in Malmö’s main synagogue, he expressed disappointment with the United Nations, where Sweden had until recently regularly signed on to resolutions singling out Israel for international rebuke. Before this September, Israel and Sweden’s foreign ministers had not spoken to each other for seven years, a historic low in relations.

The previous mayor of Malmö, Ilmar Reepalu, was also known for his sharp anti-Israel stance, and for blaming attacks on Jews on their support of the Jewish state.

“What if Sweden was under attack today?” he said to the audience, which included Löfven, defending Israel’s actions in armed conflicts with the Palestinians and others in its region.

Over a decade ago, Lauder wrote an op-ed in which he heavily criticized Swedish politicians and media for inspiring antisemitic attitudes with what he deemed their over-the-line Israel rhetoric. But his tone on Tuesday was dramatically different.

“Ten years ago Sweden was not friendly at all, not only to Israel, but to the Jewish people,” Lauder told JTA. ‘We worked day and night. We watched and we listened to what the prime minister and his government were doing. It was like a miracle… I will use Prime Minister Löfven as an example when I speak to people. I hope other countries will follow.”

Löfven, who has led Sweden since 2014, has been clear that he wants to leave behind a legacy of defending Jews. He first visited the Auschwitz museum in 2017 and on International Holocaust Remembrance Day in 2019 he declared that Sweden would create a state museum devoted to memorializing the Holocaust. In 2020, an allocation of over $1 million towards the goal was announced, and last month the government declared further support of approximately $3.5 million dollars to be given to the National Historical Museums Agency responsible for the task.

It has now been confirmed that the new museum will be located in Stockholm — even though opinions on that choice were split both among Swedish Jews and scholars. Stockholm — the city of Sweden’s most famous Righteous Among the Nations, diplomat Raoul Wallenberg — and Malmö were the two most frequently mentioned locations.

Malmö, which lies in the southernmost part of Sweden, just 25 miles across the Öresund strait from Copenhagen, became a safe haven for several thousand Danish Jews in 1943 and for four thousands more in 1945, when it took in evacuees from the Bergen-Belsen concentration camp. Despite that, some feared that the Holocaust history would have been used to hide Malmö’s current problems. Others argued that the contemporary issues made it more important to place a museum about Jews there.

Despite the gestures, 97-year-old Holocaust survivor Lea Gleitman, who has lived in Malmö since 1946, succinctly summarized the feelings many Swedish Jews had about the Malmö conference, in an interview with Sweden’s national broadcaster SVT.

“It is important, but only if it really leads to something. Sometimes it is just talk, but we have hope, maybe,” she said.