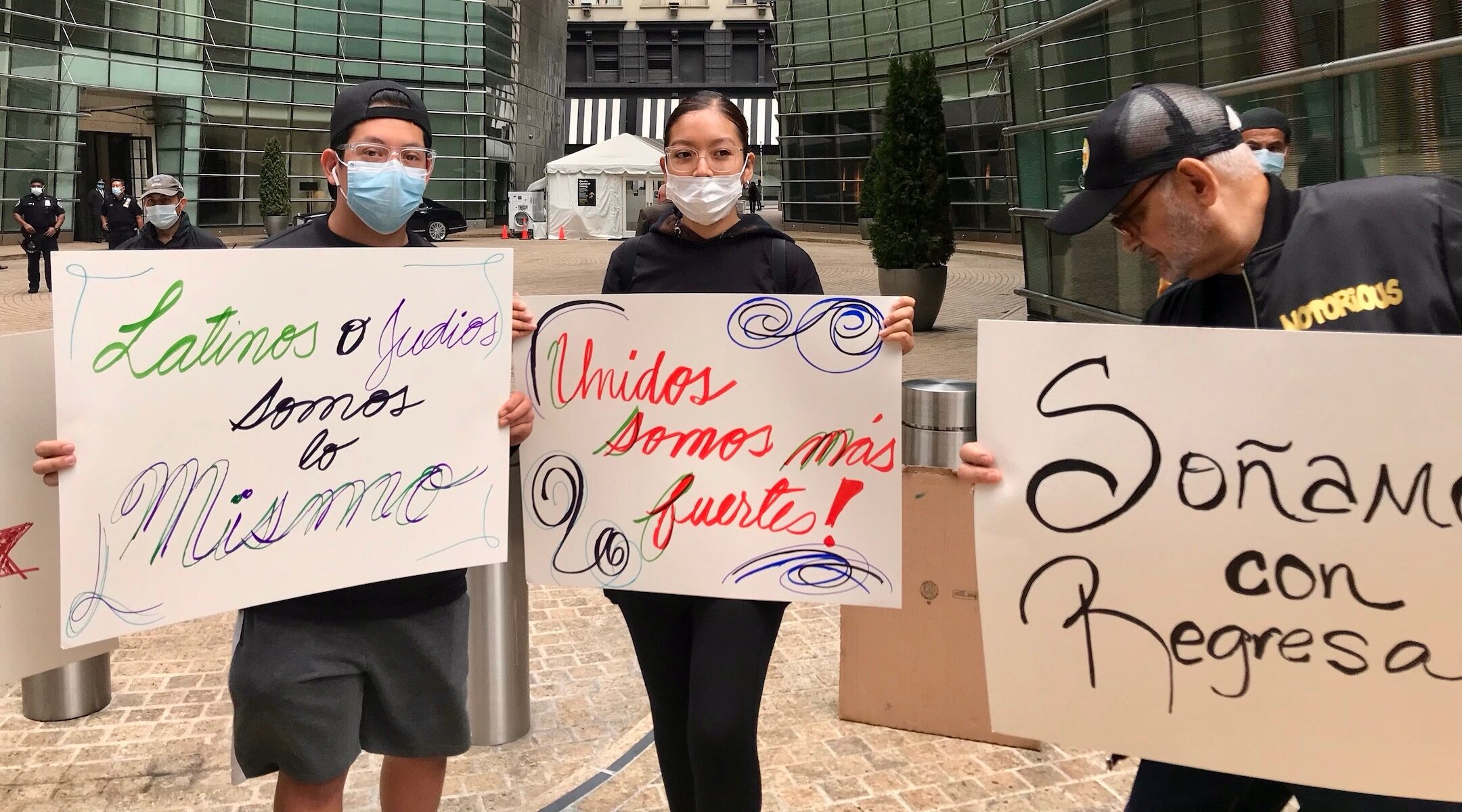 Protestors hold up signs in front of the Spanish Consulate in New York City at a rally for those seeking citizenship under a law meant to repatriate Jews with Spanish heritage, Oct. 11, 2021. English translations left to right: “Latinos or Jews, we are the same.” “United we are stronger!” “We dream of returning.” (Julia Gergely)
Advertisement

(JTA) — After Spain announced it would offer of citizenship to families of Jews it expelled more than 500 years ago, Mark Tafoya, a personal chef living in New York City, filled out an application.

Originally from Albuquerque, New Mexico, Tafoya calls himself a “proud Sephardic Jew rediscovering my roots.” So from Inwood, in northern Manhattan, he tracked down all the required documents, created a genealogy chart and hired an attorney. He detailed his family’s heritage from their departure to Spain and arrival in New Mexico some 500 years ago. He even bought a small stock in Santander Bank to prove a monetary link — what the application requirement defines as a “special connection” — to Spain. The Jewish Federation of New Mexico certified his application.

Tafoya had seemingly done everything right. But for the last 25 months, he has been waiting for an answer from Spain that hasn’t come. He hasn’t gotten any indication that he’ll ever get an answer.

“The waiting is the hardest part,” he said. “If I knew I was rejected, I could start the appeals process.” Appeals can take four to five months.

Until this year, only one applicant for the Spanish citizenship program had been rejected. But in 2021, over 3,000 applications have already been denied, according to the American Sephardi Federation, and more than 20,000 have found themselves in an extended period of waiting — not just for citizenship, but for an explanation of what appear to be endless delays.

Tafoya was one of about 30 people who gathered in front of the Consulate General of Spain in New York on Monday to protest the denials and delays. Calling their protest “Yo Soy Parte” (“I am a part”), members of both Latino and Jewish communities to call out what they see as the injustice and hypocrisy of these rejections.

The protest was the result of a collaboration between American Sephardi Federation, a Jewish group, and The Philos Project, a New York-based nonprofit that helps Christian leaders, mostly evangelicals, “understand and engage with important Near East issues,” according to its website.

The event emerged after Jason Guberman, executive director at the American Sephardi Federation, spoke to Hispanic leaders around New York about the issue at the invitation of Jesse Rojo, the head of Philos Latino who often collaborates with Guberman’s group.

Teresa Leger Fernandez, a Democratic congresswoman from New Mexico, flew in for the event and spoke to the crowd in an expression of solidarity.

“I stand with you as somebody who has a deep connection to Spain, its history, and the Sephardim,” Fernandez said. “Like many in Northern New Mexico, my ancestors include the Spanish, the indigenous, the Apache, the Pueblo, and yes, the displaced Sephardim.”

A congressional letter that she initiated addressed to Spanish President Pedro Sánchez Pérez-Castejón and would introduce on Oct. 12 was read aloud at the protest.

“We urge you to rescind these changes and ensure that every eligible Sephardic Jewish descendant can receive citizenship to their ancestral home under the law as the Cortes Generales intended,” said the letter, signed by nine members of Congress, including New York Democrats Alan Lowenthal and Ritchie Torres.

Spain’s Law of Return passed unanimously in the Cortes Generales, the Spanish legislature, in 2015. It allowed for any descendent of Sephardic heritage to apply for citizenship. Similar versions of the law existed throughout the 20th century, but the 2015 version said applicants need not be practicing Jews, and that they could apply for dual citizenship.

That opened the door for over 132,000 people who applied for citizenship under the program, claiming ancestry through family trees that included Sephardic Jews with roots in Spain and non-Jewish descendants of “crypto-Jews” whose ancestors were expelled or fled Iberia during the Inquisition. More than half of those people began their application in the last month before the Oct. 1, 2019 deadline.

But the 59,000 people who had submitted their materials well before before the October 2019 closing date should have gotten an answer by now. Of them, approximately 34,000 have been granted citizenship, and another 22,000 still await a response.

For the Sephardic descendants, it seemed as though Spain was genuine in its attempts to make reparations. “It was an amazing gesture,” said Guberman, who has worked with many applicants to get their documents in order.

Which is why it feels like such a betrayal when applications are suddenly and inexplicably rejected, protestors said.

“It’s an insult on top of an insult,” said Tafoya, referring to Spain inviting its Sephardic descendants back in after acknowledging the horrific acts of the Inquisition, only to reject them once again.

“The broken promise of the noble gesture of reparation wounds more than if Spain had never made the offer of return in the first place,” the congressional letter concludes.

It is unclear why there has been a sudden slew of rejections. The congressional letter cites complaints by applicants who were approved by Spanish judges, only to be rejected by the Ministry of Justice — a move that is illegal, according to the New York Times. Many applicants have been asked to provide more in-depth genealogy charts, and some face bureaucrats’ insistence that the “special connection” donation to the Spanish economy must have been made before the law was announced in 2015. Others have seen certificates of Sephardic origin from Jewish institutions outside of Spain rejected.

The window to apply closed on Oct. 1, 2019, which makes it even more frustrating that the rules for approval changed after that deadline and applications were already in, protestors told The Jewish Week.

The Jewish Federation of New Mexico, located where a number of people claim Spanish Jewish ancestry, is one of only a few institutions in the United States that grants certificates of Spanish-Jewish origin to non-Jews. Many of those applicants have been denied.

The New Mexico federation helped certify 20,000 people from more than 50 countries across the globe, it said. A majority of the applicants came from Venezuela Colombia, and Mexico.

The wave of rejections is especially heartbreaking for Venezuelans who applied, Tafoya said. The law seemed to offer a safe, legal opportunity for them to leave their beleaguered country and become European Union citizens. Many had emptied their savings to afford the application process, which costs at least $7,000 to complete. 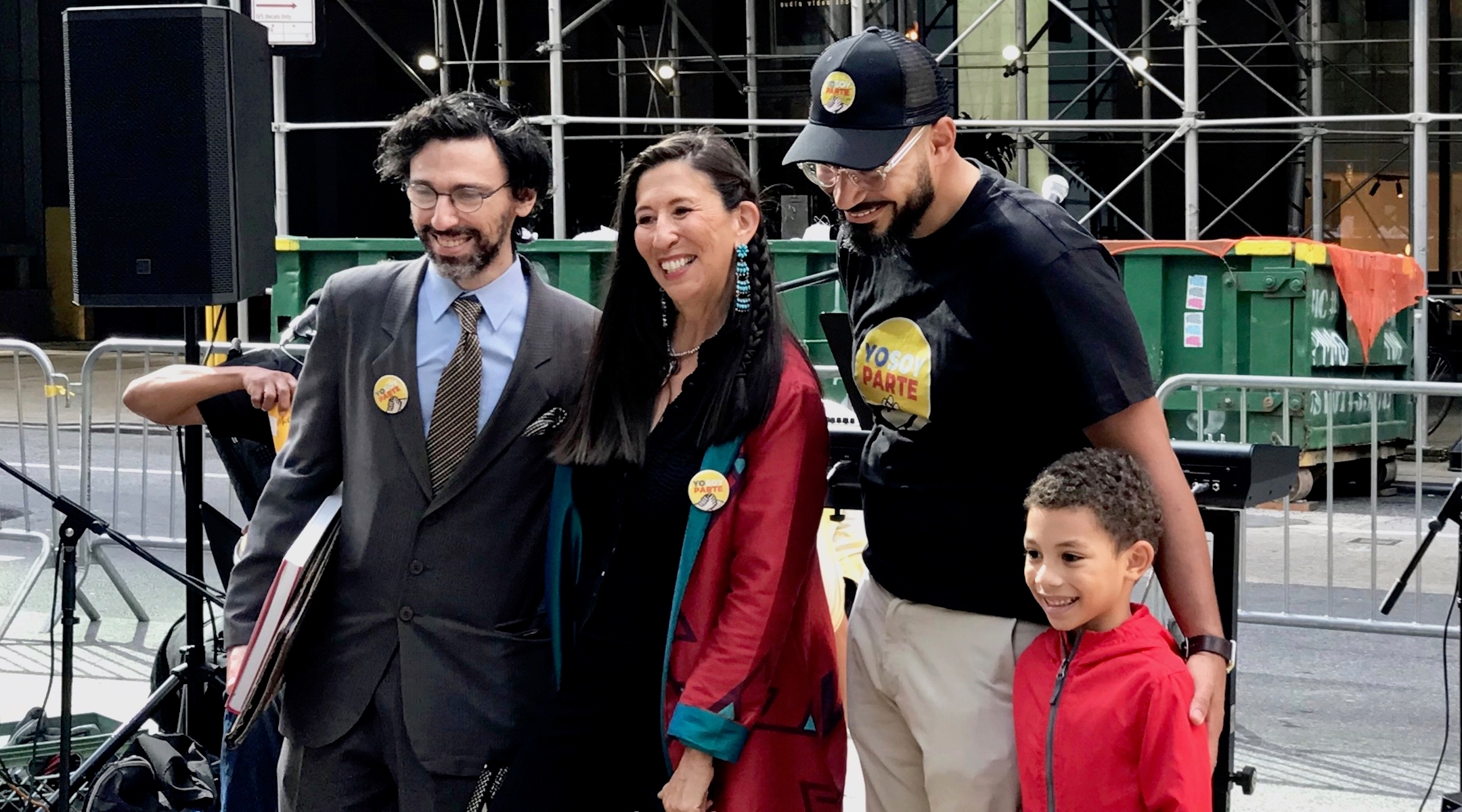 Jason Guberman, executive director at the American Sephardi Federation; Rep. Teresa Leger Fernandez, D-New Mexico; and Jesse Rojo, director of Philos Latino (with his son) at a rally in New York City pressuring Spain to approve citizenship applications for those with Jewish roots in the country, Oct. 11, 2021. (Julia Gergely)

Some of the protestors speculated that the halt in approvals is due to sentiments of antisemitism in the new Spanish government, which is led by a left-wing party that came to power in November 2019. Others wondered if the ruling party, which was not responsible for the Law of Return, is wary of introducing new voters into the country who might support the previous, more conservative party that had accepted them.

The Consulate General of Spain in New York does not provide information on the status of pending applications, it told JTA by email.

“I believed the Spanish government when they said that they were sorry for the sins of the past,” said Jason Gomez. a third-generation New Yorker who learned about Spain’s citizenship program while it was under discussion. He subsequently interviewed his older Puerto Rican relatives about the strange customs of his childhood — eating only beef, not pork; placing rocks on graves and only marrying into certain families, all reminiscent of Jewish traditions.

Gomez discovered that his family is descended from a community known as Xuetas, Mallorcan Jews who were forcibly converted to Christianity, but continued to practice their faith in secret.

“In 2015 the Spanish government said that they recognized the generations of suffering in this terrible history and wanted to make amends,” he said in his speech. “But only six years later they have turned away from us.”