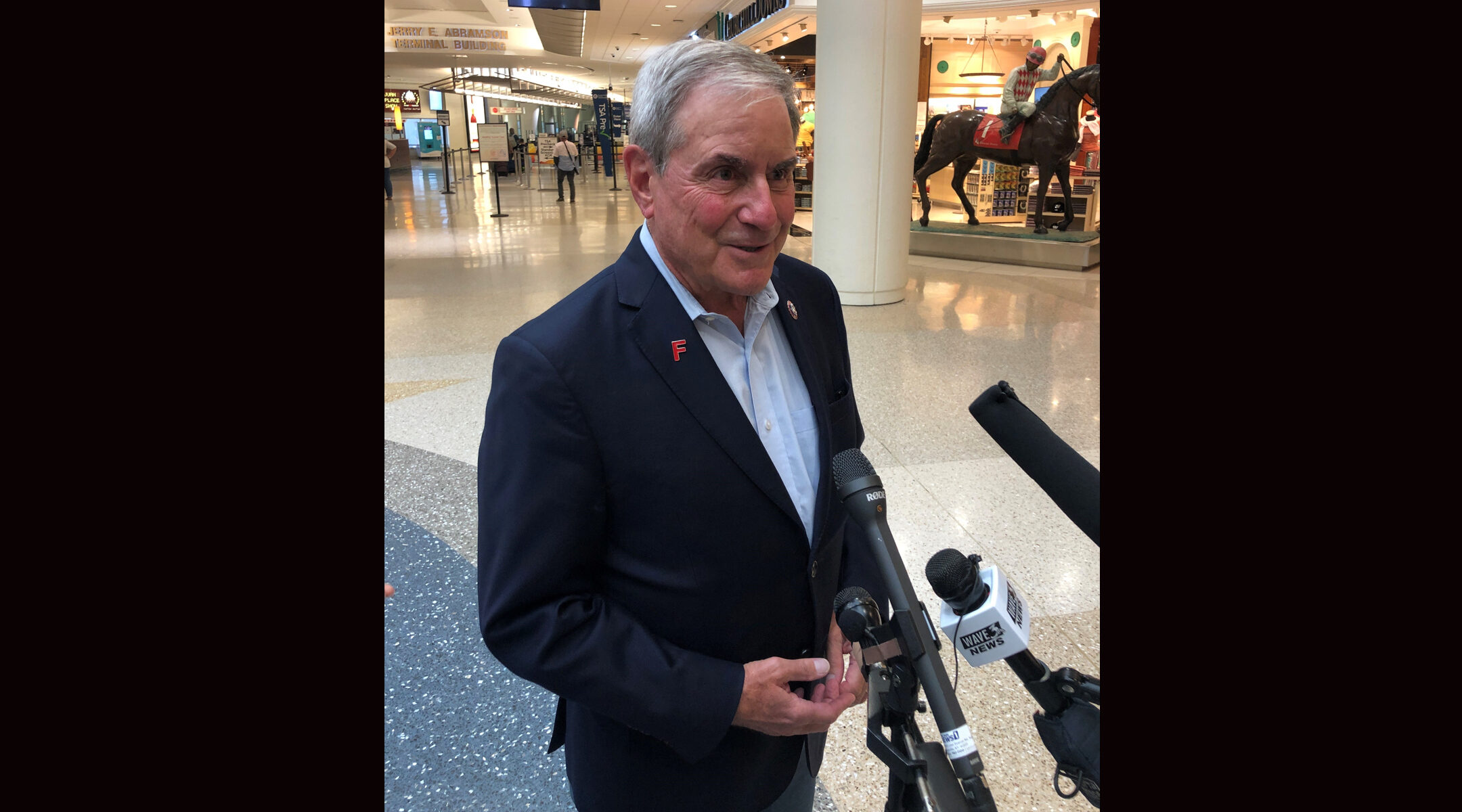 LOUISVILLE (JTA) — Kentucky Rep. John Yarmuth has been a staunch supporter of Israel during his 15 years in Congress, though he hasn’t always walked in lockstep with its leaders.

He has condemned former Prime Minister Benjamin Netanyahu for using violence to quell demonstrations, but has reaffirmed Israel’s right to defend itself. He has assailed rocket attacks on Jerusalem and southern Israel by Hamas, but endorsed the 2015 nuclear agreement with Iran despite Israel’s opposition. And he favors a two-state solution, but opposes forced evictions of Arab residents from East Jerusalem.

In other words, the Louisville Democrat, a descendant of Russian and Austrian Jews, backs Israel on his own terms.

That will end on Jan. 3, 2023. Yarmuth, 73, announced Tuesday that he will not seek reelection next year, setting the stage for a wide-open campaign for Kentucky’s 3rd Congressional District that could wind up with a pro-Palestinian candidate in the seat.

Yarmuth, who addressed the press Wednesday at Louisville Muhammad Ali International Airport, said he debated his decision for months.

“I’ve been saying for some time, if I ever wrote a book about my experience, I would call it ‘House Arrest,’” Yarmuth said. “Because once you get there, it’s very difficult to leave. There is an addictive quality to it.”

Even though Yarmuth disagreed on specific policy issues over the years, Israel could always count on his support in times of need, said Matt Goldberg, director of the Louisville Jewish Community Relations Council.

“His commitment to the security of the State of Israel is rock-solid,” Goldberg said. “Even his criticism of Israeli actions, which we haven’t always agreed with, is born of that affinity for Israel.”

It’s not clear whether his successor will have the same orientation. So far, two candidates have announced they will run for Yarmuth’s seat: Kentucky State Sen. Morgan McGarvey and State Rep. Attica Scott.

Scott, a progressive Democrat, appeared at a pro-Palestinian rally in May, during the conflict then between Israel and Hamas in Gaza. Scott told the crowd, “We are anti-war, anti-oppression and anti-apartheid,” the Louisville Courier Journal reported. Her remarks irked some Jewish residents. She has also spoken out strongly against legislators in her state who have compared abortions to the Holocaust, saying the comparison is a “reprehensible evil perpetuated against Jewish people here in Kentucky.”

A third potential candidate would keep the seat Jewish, and in the Yarmuth family: John’s son, Aaron Yarmuth, is considering a run.

“Kitchen-table issues” – not Israel – are likely to dominate next year’s campaign, according to University of Louisville Political Science Professor Dewey M. Clayton, a close observer of Kentucky politics.

“It may very well come up as an issue, but I don’t think it’s going to be a huge factor given the other problems we’re dealing with,” Clayton said.

Yarmuth agreed. “In terms of what voters in the 3rd District will base their vote on, I would doubt that’s in the top 10,” he said.

A Louisville native and graduate of Yale University, Yarmuth cut his teeth in politics as a legislative aide for then-Sen. Marlow Cook, a Kentucky Republican, from 1971-74.

In 1976, Yarmuth ventured into journalism, founding Louisville Today and then the Louisville Eccentric Observer in 1990, which is still publishing as LEO Weekly. Aaron Yarmuth previously served as LEO’s editor before he sold the paper in June to Euclid Media Group.

In 2006, Yarmuth ran against and defeated the incumbent congresswoman from Louisville, Anne Northup, a Republican.

He has since moved into leadership, currently serving as chairman of the House Budget Committee.

Yarmuth has never needed to depend on the Jewish vote to get elected. Of the 700,000 people in his district, only about 8,000 are Jews.

Still, Yarmuth’s connection to the Jewish community has remained strong throughout the years. A member of The Temple, the largest synagogue in Louisville, he frequently speaks at community events and Mens Club functions. He also likes to mention how he learned to play basketball at the local Jewish community center.

“Meeting with him and his staff … has always been a pleasure,” the JCRC’s Goldberg said. “He has legislatively prioritized many of the issues that we care about so much, such as increasing funding to social safety net programs.”

Yarmuth may not be the only Jewish congressman from the South pondering retirement this year. During his briefing Wednesday, he mentioned that his colleague and close friend, Rep. Steve Cohen, a Tennessee Democrat, is facing the same decision.

“He’s agonizing over whether to run right now,” Yarmuth said of Cohen. “He said, ‘I’m losing my best friend.’ And that’s kind of how many of us feel.”

Requests for comment to Cohen’s office were not returned.

Yarmuth’s son, Aaron Yarmuth, has never held elected office. He said this week he would only run if he felt his candidacy would help Democrats hold the seat. The news that he was considering a run came as a shock to many, including the editor of his former paper, and the already-declared candidate Scott made an oblique reference to Aaron in a statement, saying, “No political seat belongs to any family member, front-runner, or legacy.”

John Yarmuth said he will not endorse anyone for his seat unless Aaron runs.

This story was published in collaboration with Louisville Jewish Community.