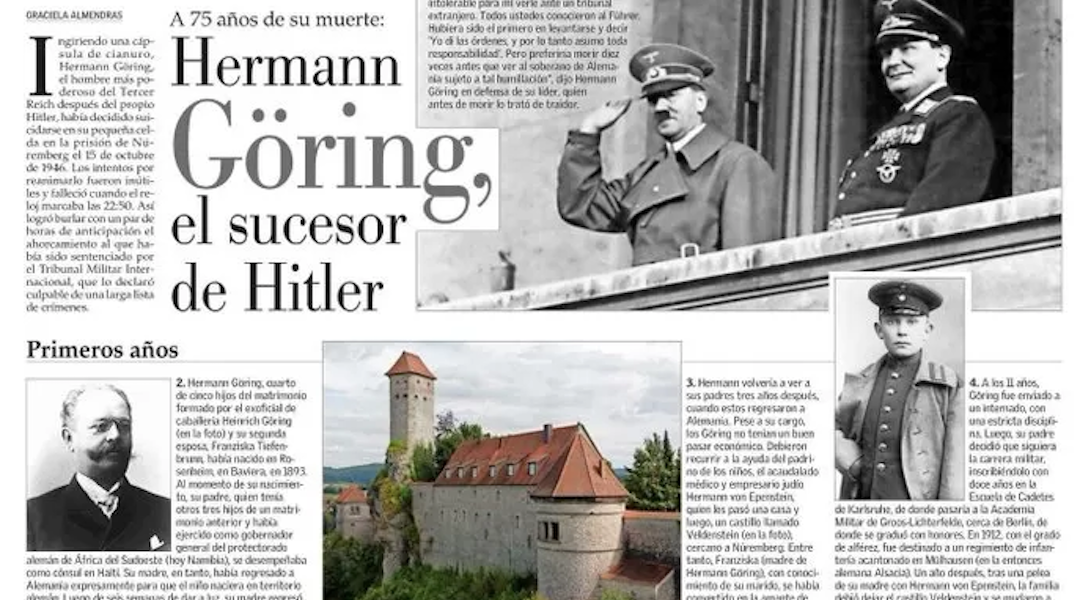 (JTA) — One of the largest newspapers in Chile published a tribute feature to Nazi Hermann Göring on Sunday, sparking an outcry from politicians and the Chilean Jewish community.

The article, which was timed to the 75th anniversary of Göring’s death and resembled a eulogy, included details about the Nazi leader’s youth, military career and close relationship to Adolf Hitler, accompanied by various photos.

In a statement posted to Twitter, the Jewish Community of Chile organization called the article “an apology for Nazism.”

“In Europe, this publication would be considered a crime,” the organization said, referring to countries that outlaw Nazi sympathizing.

Germany’s embassy in Santiago said “It is not customary for the Embassy to comment” on newspaper articles, but added “We just want to make it very clear: This character, H. Goering, committed crimes against humanity and was one of the pillars of the Nazi regime.”

Göring was one of Hitler’s highest-ranking officers, and helped create the Gestapo secret police force. During Hitler’s Four-Year Plan in 1936, he was given broad economic powers, including the authority to confiscate Jewish property. He benefited personally from looted art, and during the Holocaust had possession of Matisse’s “Girl in Yellow and Blue with Guitar.”

At the Nuremberg trials in 1946, Göring was found guilty of conspiracy, crimes against peace, war crimes, and crimes against humanity. He was sentenced to death by hanging but committed suicide hours before it was carried out by ingesting cyanide.

El Mercurio, which has a conservative political slant, is known as Chile’s newspaper of record.

“There isn’t even a speck of room for criminals against humanity,” wrote Sebastián Sichel, an independent running as part of the conservative Chile Podemos coalition. “My solidarity with the Jewish community and to anyone else who may have felt offended by the publication.”