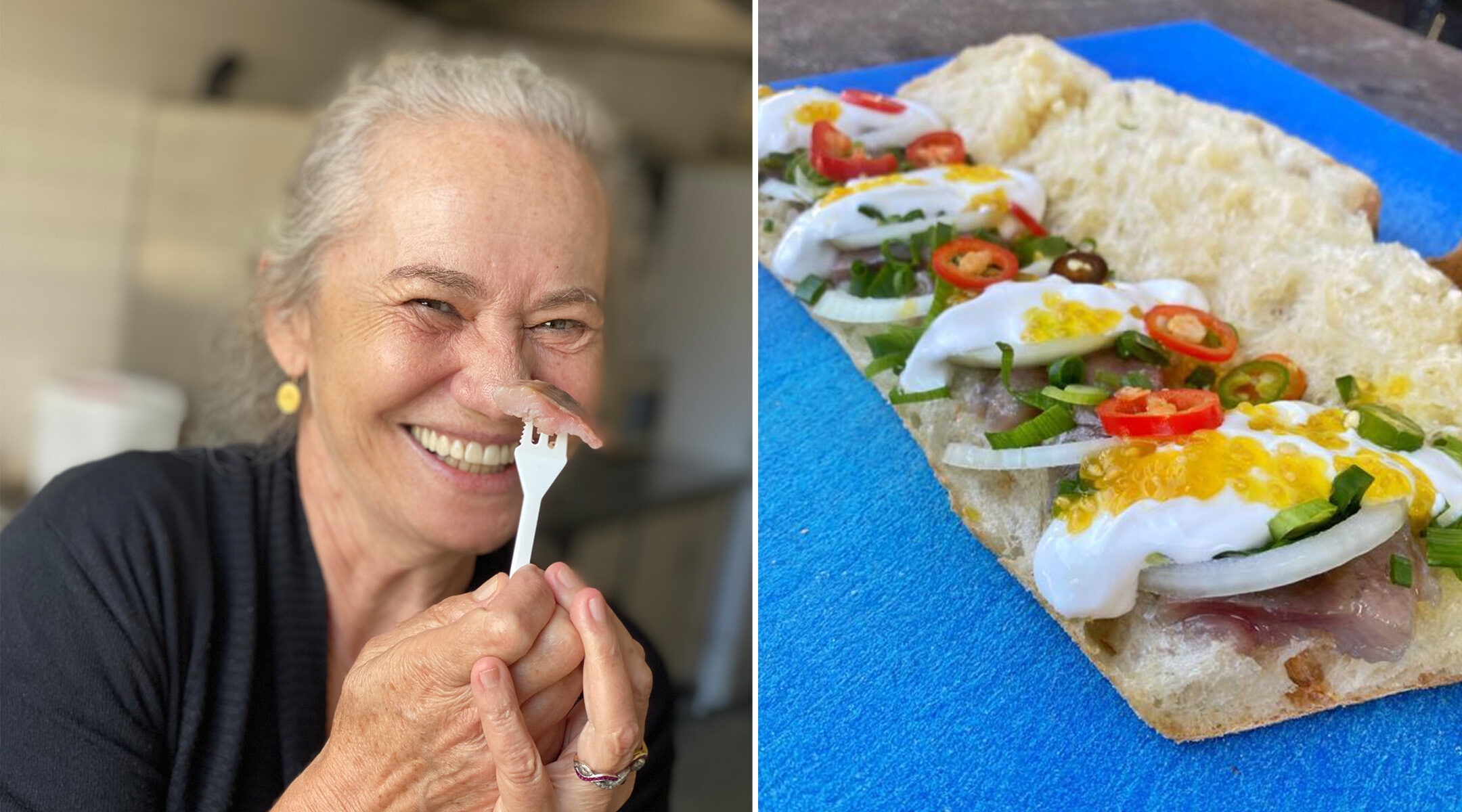 Sherry Ansky, namesake and founder of the Tel Aviv sandwich shop Sherry Herring, clowns with a bit of herring, the main ingredient in her signature sandwich, right. (Courtesy)
Advertisement

(New York Jewish Week via JTA) — Imagine arriving at the Pastrami Queen but finding no pastrami, or showing up at Holy Schnitzel to find its signature breaded chicken cutlet off the menu.

To quote Tevye, sounds crazy, no? But that is exactly what will happen if you visit Sherry Herring, the Israeli eatery that recently opened on the Upper West Side of Manhattan. It is the first branch of the renowned sandwich bar in the port of Tel Aviv famous for — you guessed it — its herring sandwiches.

But for the moment, to quote Sherry Ansky, the driving force behind Sherry Herring, the New York outpost has “no Sherry and no herring.”

That’s because Ansky is still waiting for her travel documents to enter the United States —  and the herring is still aging at a Dutch processor, patiently soaking up the brine and flavors that must meet Ansky’s approval.

Ansky is a food celebrity in Israel, where she has written six cookbooks (one of which was translated into English). For decades she was a food columnist for the daily newspaper Maariv. But in 2011 she hit a writer’s block. It was at that time that her daughter, Michal Ansky, herself a food journalist, opened the farmer’s market in the port of Tel Aviv, which soon became a draw for tourists, foodies and hipsters. Sherry Ansky decided to create a sandwich shop there that featured herring.

Ansky has had a long-standing love affair with herring, the brined or pickled fish that is a staple of Ashkenazi cuisine. When she was 6 years old, she went to synagogue with her father.

“Somebody made a kiddush and brought me a plate filled with lekach [honey cake], kugel and lots of herring,” she told The Jewish Week. “I ate one piece, then another, until I finished it all. I believe that there is a moment when you understand the power of candy. For me, it happened with herring.”

Ansky’s shop, featuring herring and other fish sandwiches, was an immediate success. Shortly after she opened the sandwich bar, she entered the farmers’ market to find a line snaking through it and out the door.

“I fainted and ran away,” she remembers. “I told the people to go away! I can’t do it.”

Even those who aren’t normally fans of herring may find it hard not be taken by Ansky’s herring sandwich. It is a carefully constructed work consisting of a fresh baguette, sliced in half and slathered with sour cream and French butter, seasoned with hot pepper, seeds and juice from a tomato, onions and scallions, and finished off with brined herring.

Food celebrity Phil Rosenthal visited the Tel Aviv port for his Netflix show “Somebody Feed Phil” and declared Ansky’s herring sandwich was “one of the best sandwiches I’ve ever had in my stupid life.”

“The taste is precise,” said Ansky. “At the end of the day, I feel like I worked on this sandwich all of my life, until the moment I needed it.”

During the pandemic, Ansky sent her son-in-law and business partner, Eyal Amir, to New York to scout out a location for the first of what they hope will be several Sherry Herring shops. They chose the Upper West Side, said Amir, “because it is a Jewish neighborhood where our penetration to the market will be easiest.” Their eatery, said Amir, builds on the culture of appetizing stores in New York, including Russ & Daughters on the Lower East Side and Barney Greengrass less than a mile away.

The anchovy sandwich is among the options at Sherry Herring, which now has a branch on Manhattan’s Upper West Side. (Courtesy)

Like the Tel Aviv sandwich bar, the Manhattan shop offers a choice of smoked fish sandwiches: tuna from a smokehouse in the Hamptons, wild-caught Alaskan sockeye salmon, mackerel from, according to Amir, the “wild waters off of Spain.”

So why no herring? Because there is herring and then there is Sherry’s herring. During his scouting ventures, Amir brought back samples of all of the herrings he could source in the five boroughs of New York City. None met the approval of Ansky’s discerning palate. So she flew off to Holland and worked with a fishery there to select the best herring — creamy with a soft bite — and to create the brine that would give her the flavor she was after.

“We kept on experimenting until we reached the right flavor in July,” said Amir. Then they had to submit the recipe and process to the FDA for approval. They started production last month. But the herring, said Amir, “needs 11 weeks in our unique brine to arrive at the flavor, colors and aroma that we want.”

So the herring will come, in a first shipment of 15,000 filets, in December. Will that be enough? That, said Amir, “depends on how much New Yorkers like it.”