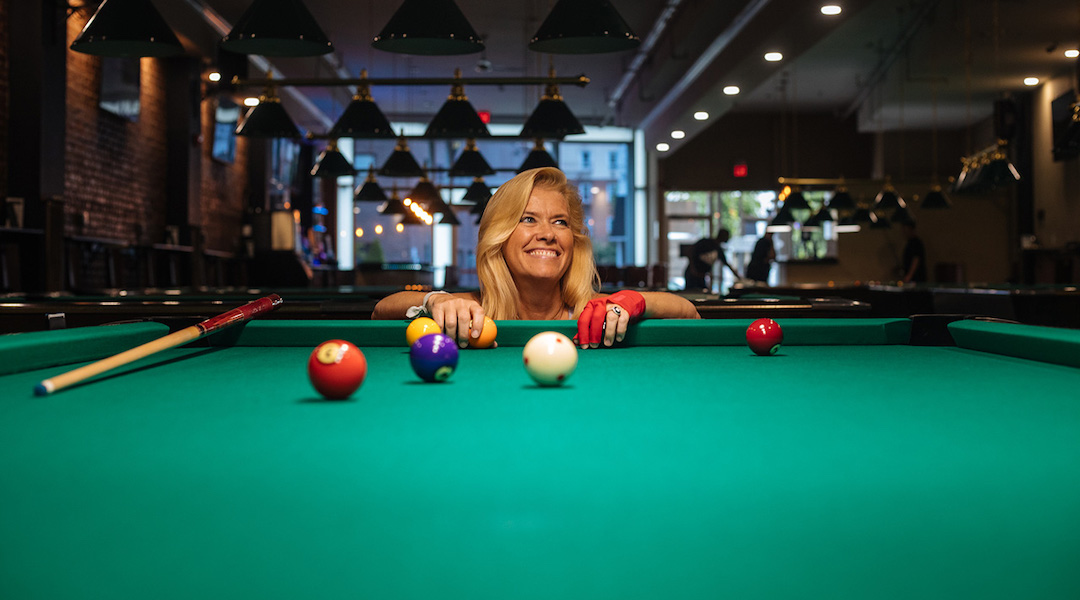 JoAnn Mason Parker, once the wunderkind of competitive pool, is looking to make a comeback — and she's being inducted into the Northern California Jewish Sports Hall of Fame. (Parker Hill/J. The Jewish News of Northern California)
Advertisement

(J. The Jewish News of Northern California via JTA) — For JoAnn Mason Parker, playing pool comes just as naturally as handling a knife and fork.

“You’re not going to drop it, because you know what you’re doing,” the former child prodigy said, explaining the analogy during a recent video chat from Westchester, New York. Her mini Labradoodle, Rivkah, sat nearby. “It’s not hard.”

The former U.S. Open 9-Ball champion describes her style as “aggressive” — both defensively and offensively. (In pool, offense is when you pocket balls, and defense is when you position the cue ball in such a way as to disadvantage your opponent.) Her motto, she said, is to “make the game easy for me. And hard for you.”

On Oct. 24, Parker became the first billiards player inducted into the Jewish Sports Hall of Fame of Northern California, a nonprofit organization recognizing excellence in sport that also hands out scholarships each year to deserving student-athletes.

“When I saw what they stand for, I felt like I wanted to be a part of it,” Parker said.

Today, 26 years after retiring from the pro circuit, Parker, 53, is eyeing a comeback. She’s been playing in (and winning) amateur tournaments in New York, working out and envisioning a return to competition at the highest level.

A natural athlete (Parker ran track and played volleyball, softball and, later in life, golf), she gravitated toward billiards at a very early age. She emulated and learned from her father, Harvey Mason, a pro player and coach who trained the likes of Tony Robles (“The Silent Assassin”) and Sammy Guzman.

“When I was 4 years old I always copied whatever my dad was doing,” she said. “I was a daddy’s girl right from the start.”

While watching him play, she would get some early coaching. Harvey would often tell her, “Don’t watch the balls, JoAnn, watch me,” Parker said. “Look at the machine. Then you’ll know how to do this one day.”

And she had obvious natural gifts. At the age of 5, she said, she ran her first rack of balls (meaning, pocketed each one without missing).

It was on a bar-size table at a pool hall in Amsterdam, New York. Parker’s parents, both from the Bronx, in those days ventured upstate for fishing, horse racing and billiards each summer with the family. She and her older sister, Nancy, were given quarters to keep them occupied.

She could barely reach the table, so she shot sidearm.

When the girls kept returning to their parents for more quarters, their father asked what was going on: “JoAnn just keeps making all the balls in the hole!” Nancy said to his astonishment. 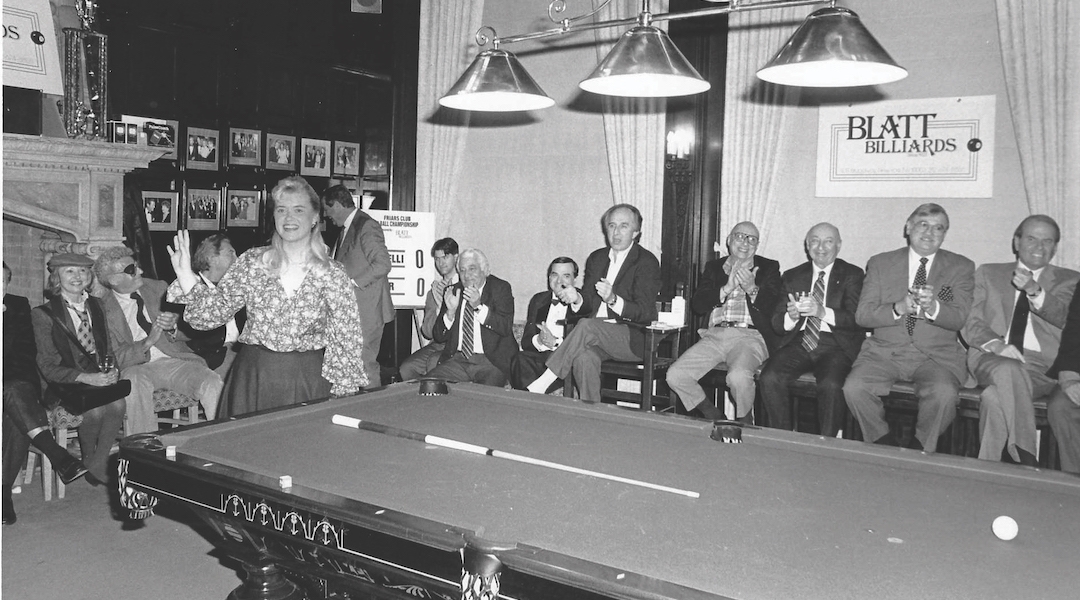 JoAnn Mason Parker at a 1992 exhibition in New York City, with her husband, Robert Parker, clapping with Mayor Ed Koch and other members of the Friars Club. (Courtesy of J. The Jewish News of Northern California)

Parker, who went on to become known as the “Battling Beauty” in professional billiards, earned her reputation as a prodigy around the time she sank all those balls in Amsterdam. She started playing on the amateur circuit as a kid and won her first major tournament, the “Big Apple” Amateur 8-Ball title, at 13.

While still a teenager, Parker went pro, joining the Women’s Professional Billiards Tour after high school. She won the McDermott Masters in 1988; and two years later, in 1990, the U.S. Open, the most competitive event in the country, beating the No. 1 ranked player in the world. She was the New York State billiards champion for six years running.

And all that was only her first career. Lesser known was her second calling: For 12 years, Parker taught pre-kindergarten at Katz Hillel Day School in Boca Raton, Florida, which her son William attended. The motto of the Modern Orthodox school: “Where excellence in Torah and general studies is our passion.”

Parker went from the “Battling Beauty” to “Morah JoAnn,” Hebrew for teacher.

“My billiards background, and my competitiveness, made me a way better teacher,” Parker said. “Way better.”

Raised in a secular Jewish family, Parker moved to Monticello, New York, when she was 13. Today she speaks with a distinct New York accent that brings to mind baked ziti as much as it does bagels and lox.

Parker is proudly “99.9 percent Ashkenazi,” she said, citing a recent DNA test. She peppers her speech with Yiddish phrases like “Yiddishe kop,” or a Jewish way of thinking or behaving.

Her husband, Robert Parker, comes from the hotelier Parker family that owned the Concord Resort Hotel, the renowned Borscht Belt resort in the Catskills, until its closure amid considerable controversy in 1998.

At age 14, Parker competed in a tournament called the World Straight Pool Championship, held in 1981 at the swanky Roosevelt Hotel in New York City, where she was going to face the top amateur player in the world, Swedish-born Ewa Mataya, who was four years older. The event was a rude awakening, of sorts.

“I was going into the lion’s den,” Parker added with a laugh. “Lamb to the slaughter.”

She held her own, but lost the match.

Today Parker’s self-confidence could be described as total, and her competitiveness — notwithstanding billiards’ reputation as a cerebral pursuit — as reminiscent of a heavyweight boxer.

“I want to wear them down,” she says of her opponents. “I keep them on the long rail, which is a very difficult place to be. I keep making them bridge over balls. Keep making them kick backwards at balls. Make it hard.”

Then, “when you’re exhausted and worn out, I’m going for the kill,” she added. “With a smile!”

Unlike athletes in big-market sports, professional pool players, even some of the best, need gumption and some creativity to make a living. They piece together income from tournament winnings, endorsements, teaching fees and other compensation from appearances at trick shows and corporate events.

After high school, Parker skipped college in favor of what she called the “school of pool” (she would return later for a degree in early childhood education). To support herself she worked part time at a local Italian restaurant.

With her gregarious personality, she was known for charming her customers. She got her first big break from a Greek customer named Archie Papacaralumbus. He owned a small business in town — 3-D Block Co., which manufactured cement blocks — and saw promise in Parker. He offered to be her first pro sponsor.

“He was the nicest guy, he and his wife,” Parker said. “They were not born in America. And someone had given him a big break when he came to this country. So he wanted to give me a break.”

In a short professional career, she notched wins not only at the McDermott Masters and the U.S. Open in 9-Ball, but at a half-dozen New York state championships and many other tournaments from New England to China. She retired at 27 after giving birth to her son William, then returned briefly in 2010, competing in a 9-Ball tournament called the Tiger 9-Ball. And won.

Of being a Jew on the pro billiards circuit, Parker pointed to some of the heroes of the American game, role models such as Mike Sigel and Barry Behrman.

Still, there were times, particularly in the American South, when she felt uneasy hearing the chatter in the room, as likely the only Jew there. She almost always wore her chai necklace while competing.

“The minute you would hear comments about Black people, you know you’re on the radar to be next,” she said. “If that’s how these people are talking, you just know it.”

The most pivotal moment of her career came at the 1990 U.S. Open 9-Ball tournament in Norfolk, Virginia. She wore her chai necklace then, too. The most prestigious professional tournament in the country had 42 entrants that year, the largest field in its history.

In her first five competitions Parker tore through the field, winning each match. But in the final she was considered a serious underdog as she faced the No. 1–ranked player in the world.

At close to 6 feet, her competitor towered over Parker, who is 5-foot-4. And she was sponsored by Brunswick, the biggest name in pool.

It was Ewa Mataya, nine years after their first meeting.

In videos of the match, Parker’s face is relaxed, one of complete focus.

She opened the first game with a powerful break, sending a ball into the corner pocket. She took her time before her second shot, stalking the table, strategizing.

Parker didn’t have a clear shot, so she played defense. She kissed the cue ball just barely, nudging it into a position that would make it nearly impossible for Mataya to make her first shot. It worked — and then Parker went on offense. She ran the table, pocketing each ball in the correct order, winning the crucial first game of the match. She would go on to win, 11 games to 8.

Afterward when an interviewer asked her how she felt, she got choked up. “I’ve waited for this moment for a very long time. It’s been my dream to win this tournament,” she said.

More than 30 years later, after raising a son (who is now 27) and a 12-year detour in Jewish education, Parker is looking back to billiards.

She’s been training and recording demonstration videos, some of which can be viewed here. Though she cared little about fitness when on tour in her 20s (“we’d be going to Denny’s, eating all kinds of garbage”), since the summer she’s been rousing around 5:30 for early morning cardio — she sprints up a steep hill, then walks down, getting into the mindset to compete again.

“Nobody’s doing what I’m doing. I’m not afraid to feel that pain running up that hill,” she said. “I look at my opponents and I say to myself: They don’t have a right to beat me.”

In her 50s, she’s a different player. But pool isn’t like other sports. She believes she can still be as good as she was 30 years ago and can win another U.S. Open or similar tournament.

“You cannot possibly expect to be a better shot maker than you were when you were 23. Maybe you could be as good,” she said. “But you can definitely be smarter. And you can play the game with intellect. To make the game easy for me. And hard for you.”

This story was originally published in J. The Jewish News of Northern California, and is reprinted with permission.