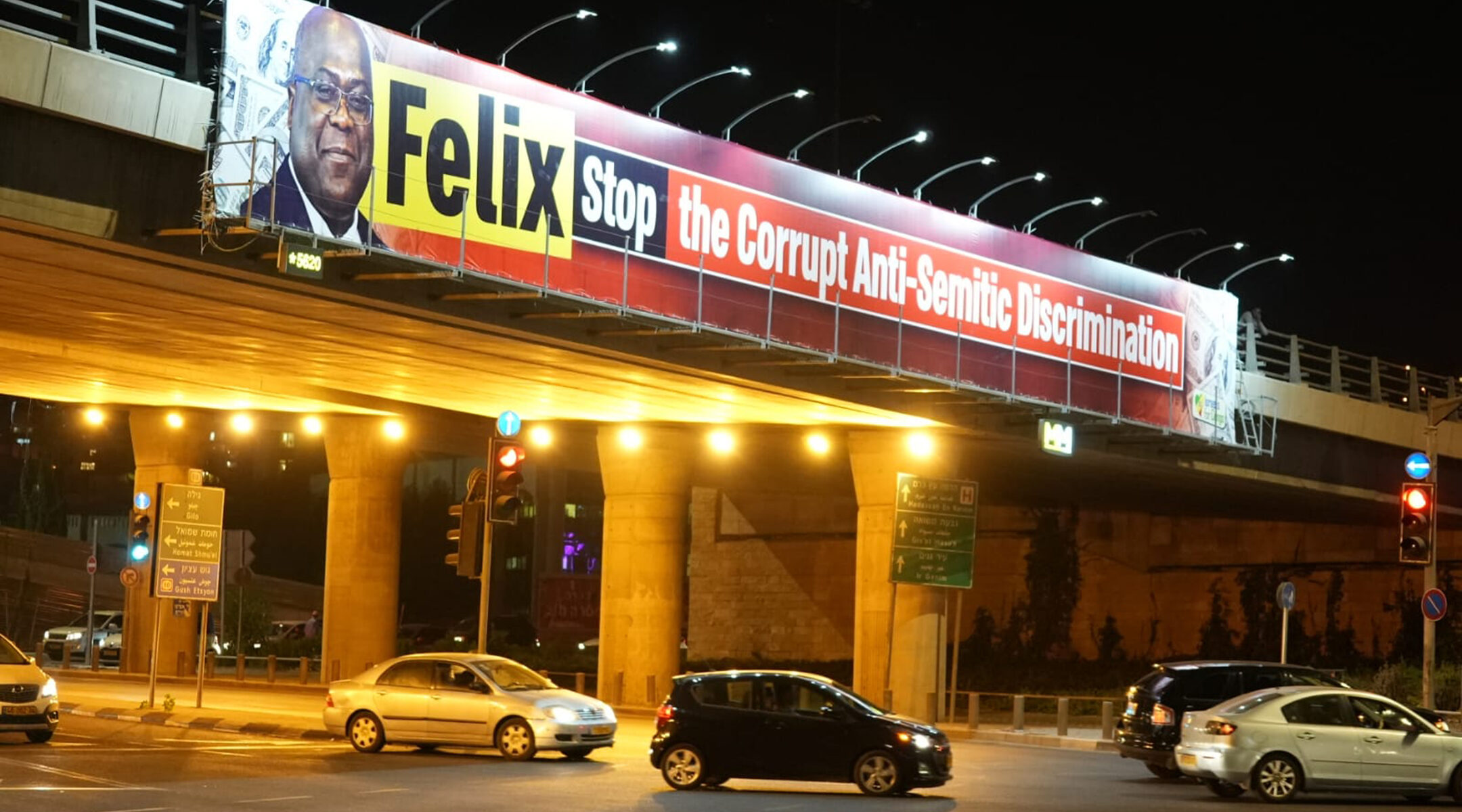 (JTA) — Protests against Israeli leaders have long been a concern during state visits to Africa by top officials of the Jewish state.

In addition to the solidarity that many Africans feel with the Palestinian cause, Israel has been implicated as an exporter of guns and importer of controversial goods that have been at the center of multiple and deadly conflicts in Africa.

But this week, it’s a major African leader who is facing protests against his policies during a landmark visit to Israel.

Several giant billboards criticizing Felix Tshisekedi, the president of the Democratic Republic of Congo, have gone up this week along roads in Jerusalem, where Tshisekedi’s motorcade was expected to travel. His three-day visit was scheduled to end Thursday.

The billboards accuse him of promoting antisemitism. “Felix, Stop the Corrupt Anti-Semitic Discrimination,” they read, without offering any more details.

Tshisekedi’s main political rival is Moise Katumbi, a politician of mixed Jewish-Congolese heritage, and lawmakers loyal to him are trying to disqualify Katumbi because of his background.

A bill that they introduced to the Congolese parliament would restrict the presidency to those with two Congo-born parents. If passed, the bill would bar Katumbi from running against Tshisekedi, who has ruled the second-largest and most minerally rich country in Africa since January 2019.

Katumbi, one of Congo’s most popular politicians, was born to a Greek Jew who fled the Holocaust in Europe and settled in Congo, where he married a local woman, Katumbi’s mother. Katumbi does not identify as a Jew.

Tshisekedi’s party, the Union for Democracy and Social Progress, defended the bill as a move to “safeguard national sovereignty and prevent foreign meddling.”

But his critics have characterized it as a thinly veiled attempt to thwart Katumbi from leveraging his credentials as a governor in a campaign based on an anti-corruption message.

Representatives for Katumbi, who until 2019 was living in exile in Brussels because of legal action against him in Congo, declined to comment to the Jewish Telegraphic Agency about the billboard campaign in Israel.

The Congolese embassy in Brussels, the African country’s main presence in Europe, also did not immediately reply to requests for a comment by JTA on the campaign.

And the organizers behind the billboard, who include an Israeli, also declined to speak, other than to say that they believed Israel is making a mistake in building a relationship with Tshisekedi.

Israel’s leadership has strengthened relations with Congo in recent years, even as Tshisekedi’s critics accuse him of being an ideological successor of his predecessor Joseph Kabila, whom many in Congo accuse of stoking ethnic tensions and stealing money. (Kabila stepped down in 2018 without seeking reelection amid huge protests. He also kept Katumbi, a critic and rival, under house arrest briefly.)

Speaking at the American Israel Public Affairs Committee conference in 2020, Tshisekedi announced he would appoint the country’s first ambassador to Israel in 20 years, and open a commercial interests office in Jerusalem.

This week in Jerusalem, Israeli President Isaac Herzog met with Tshisekedi, communicating in no uncertain terms that the billboards did not reflect the position of the Israeli government.