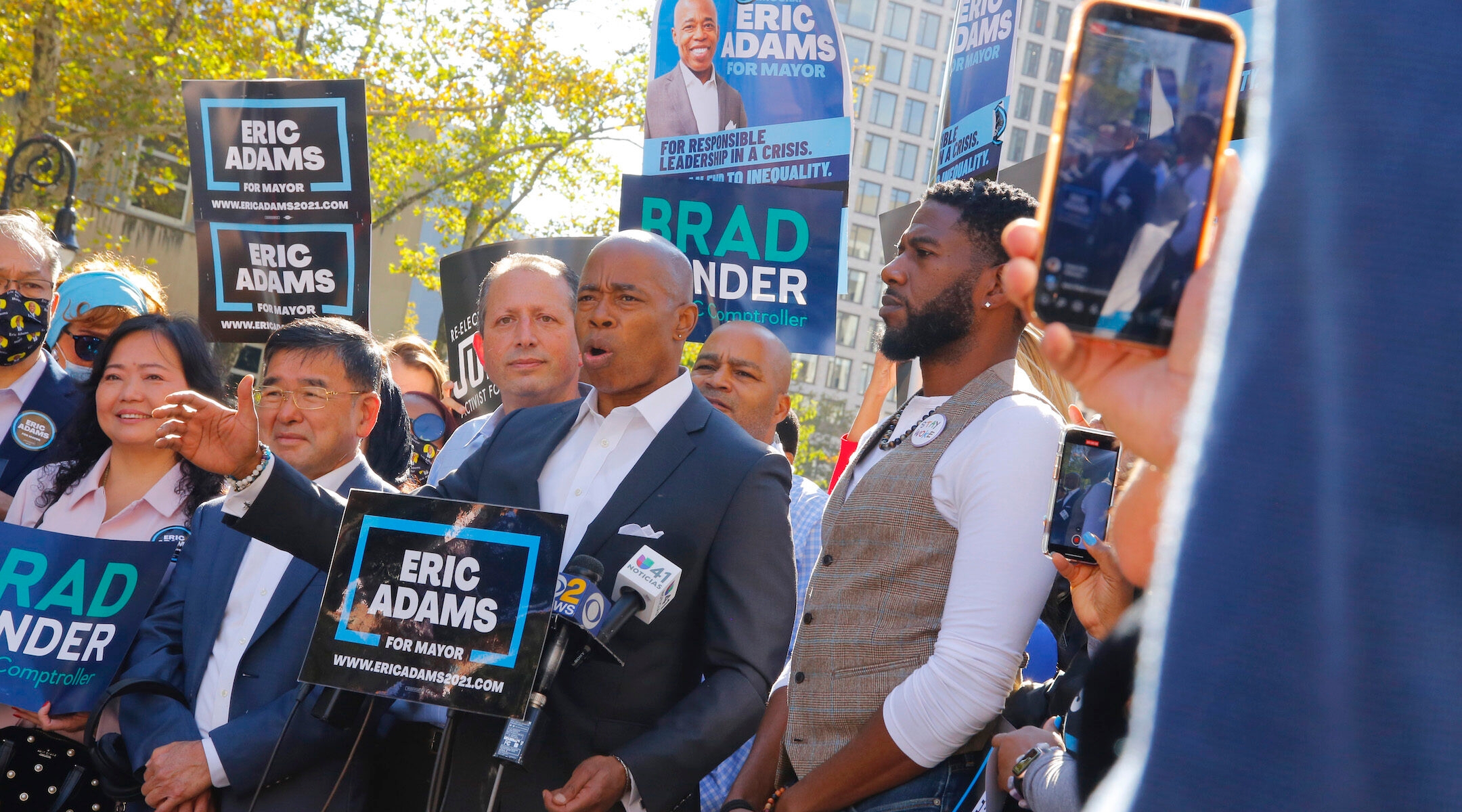 (New York Jewish Week via JTA) — Tuesday is Election Day in New York City, where the Democratic primary can often be more decisive than Election Day itself. Many key races were essentially decided in June, including mayor, comptroller and public advocate. However, there are still races to know about, including a few close City Council races. Polls are open from 6 a.m. to 9 p.m.

Mayor: Eric Adams, the Brooklyn Borough president and former NYPD officer, overcame a crowded field in the Democratic primaries, including a number of prominent progressives. He is set to become the second African American mayor of New York, after David Dinkins. He faces Republican candidate Curtis Sliwa, the talk radio host and founder of the Guardian Angels community patrol. (In 2018, Sliwa told suburban voters that Orthodox Jews were trying to “take over your community,” a comment that this year drew charges of antisemitism, which he denied.)

City Comptroller: Brad Lander is considered a shoo-in to replace Scott Stringer, who has been the city’s top financial official since 2013. Lander, who is Jewish, previously served as a City Council member for District 39, representing the Brooklyn neighborhoods of Park Slope, Gowanus, Cobble Hill, Carroll Gardens, Columbia Waterfront and parts of Windsor Terrace, Borough Park and Kensington. A progressive, Lander is endorsed by The Jewish Vote, the political arm of Jews for Racial and Economic Justice, where he volunteered and was later a co-chair in the 1990s.

Manhattan Borough President: Mark Levine, a former public school teacher and current City Council member for District 7 in Northern Manhattan, will likely be succeeding Gale Brewer as Manhattan Borough president. He served as ​​the chair of the Council Committee on Health during the pandemic, is a member of the Progressive Caucus and chaired the Council’s Jewish Caucus. Levine is an active member of his Jewish community and a congregant of Hebrew Tabernacle, a Reform synagogue in Washington Heights.

City Council District 5: Democrat Julie Menin is predicted to become the next Council member representing the Upper East Side. She will succeed Democrat Ben Kallos, an active member of the Jewish community in the district and a congregant of both Park East Synagogue and Congregation Or Zarua. Menin is the former commissioner of the Department of Consumer Affairs, and most recently served as the city’s census director.

City Council District 6: Gale Brewer, who has served as Manhattan Borough president since 2014, is expected to take up her old City Council seat on the Upper West Side. Brewer will be replacing term-limited Helen Rosenthal, who was a member of the Jewish Caucus.

City Council District 29: Lynn Schulman, who is the New York City Council Senior Community and Emergency Services Liaison, will be replacing term-limited Karen Koslowitz in their central Queens district. Schulman, who grew up in Forest Hills, expects to replace Koslowitz in the Jewish Caucus as well. She has been endorsed by The Queens Jewish Alliance, a coalition of Orthodox activists.

City Council District 32: Although District 32 in Queens holds a majority of Democratic voters, it is currently the only district in New York City outside of Staten Island to be represented by a Republican, term-limited Eric Ulrich. In one of the only contested races in this election, Democrat Felicia Singh faces Republican Joann Ariola. Singh has been endorsed by The Jewish Vote, whose members have been canvassing heavily for her among Jewish and progressive voters in the district. Singh, a high school teacher and Peace Corps alum, is running on a platform to increase public school funding and fight for climate justice. Ariola, who has worked in various political offices in the Queens’ district in her career, is prioritizing public safety.

City Council District 33: Likely replacing term-limited Stephen Levin in Brooklyn’s District 33 is progressive candidate Lincoln Restler. Restler is a lifelong resident of the district, and has served as a district leader. In the primaries, Restler was endorsed by activists from a coalition of Hasidic groups in Williamsburg, where Hasidic residents mostly voted for Donald Trump in 2020 and where Andrew Yang picked up an endorsement for mayor in the primary from local leaders.

City Council District 47: Ari Kagan will likely replace another Jewish member of the City Council, term-limited Mark Treyger, in Brooklyn’s District 47. Kagan immigrated from Belarus in 1993 and has been endorsed by the Sephardic Community Federation and the Jewish Press. He has previously worked as a journalist and political activist and plans to focus much of his work on the city’s recovery from COVID-19.

City Council District 48: The expulsion of Democrat Chaim Deutsch from the City Council after his conviction of tax fraud this spring left the seat open for the November election. The race is between Jewish candidates Steven Saperstein, a special education teacher endorsed by the NYC Police Benevolent Association, and Inna Vernikov, an attorney and immigrant from Ukraine. Vernikov, a Republican, is backed by former State Assemblyman Dov Hikind and has been outspoken about her support for Donald Trump due to his treatment of Israel. Although 45% of the district’s voters are registered Democrats, compared to just 20% who are registered Republican, Trump outperformed Biden there last November. District 48 has the city’s largest concentration of Russian speakers and a significant Orthodox Jewish population.