Israel Arbeiter, a forceful driver of Holocaust memory in Boston, dies at 96 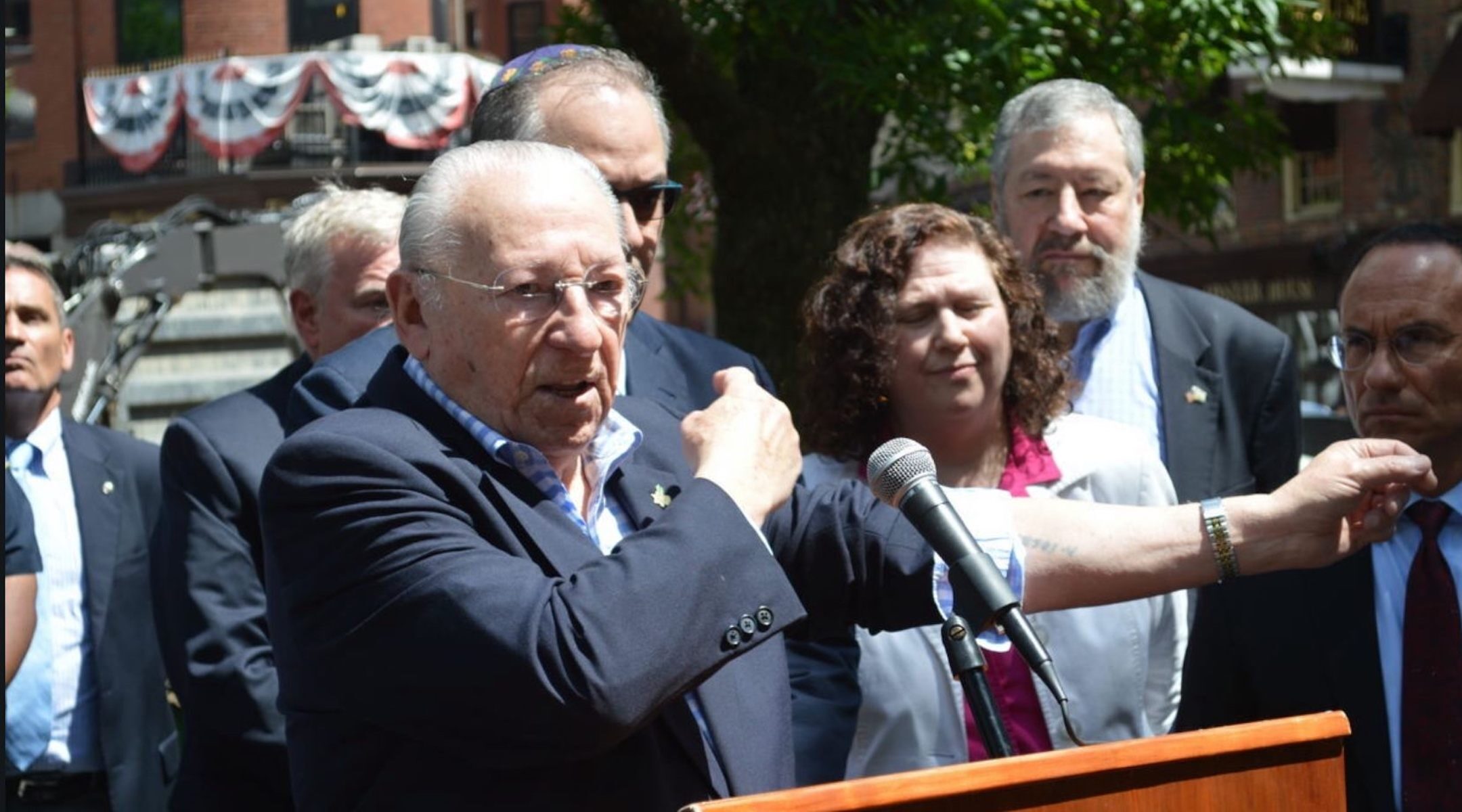 Israel Arbeiter rolls up his sleeve to show the numbers Nazis tattoed on his arm, speaking at the New England Holocaust Memorial he co-founded. (Jewish Community Relations Council of Greater Boston)
Advertisement

BOSTON (JTA) – Israel “Izzy” Arbeiter, a Holocaust survivor who became an indefatigable leader for other survivors and a prominent voice in Holocaust remembrance, here and across Germany and Poland, died Friday. He was 96.

A passionate advocate for Holocaust survivor justice and Holocaust education, Arbeiter founded a Boston-based Holocaust memorial and organization for local survivors; testified at four trials of German Nazi war criminals; and, until recently, spoke at schools and other programs across Germany.

Arbeiter was honored widely for his efforts. In 2008, the German president awarded Arbeiter the Order of Merit for fostering German-Jewish relations. In 2015, he was appointed by President Barack Obama to the Presidential Delegation of the 70th anniversary of the liberation of Auschwitz-Birkenau. Last year, he received the Order of the Merit medal from his native Poland, bestowed by Polish President Andrzej Duda.

Arbeiter’s son Jack said at his funeral that his father’s recognition from Germany was “one of his proudest awards.”

“He was never vengeful,” Jack Arbeiter said. “He wanted to build a better future for everyone.”

It was nearly 80 years ago when Srulek Arbeiter, then 17 and living under the Nazi occupation of Poland, was rounded up in the liquidation of the Starachowice ghetto, where his family, from Płock, had been confined among other Jews for two years.

His parents and 7-year-old brother were sent to one lineup bound for the Treblinka death camp. He and two other brothers were sent to a separate labor camp line.

When he risked his life to join his parents in the first lineup, his father intervened. “Children, go back, and if you survive, remember to carry on with Jewish life and Jewish tradition,” Arbeiter later recalled his father saying, tearing up as he conjured the words in a conversation earlier this year.

That was the last time Arbeiter saw his parents and younger brother, who were murdered in Treblinka. Arbeiter’s recollection of the haunting events of that day remained a vivid, defining moment in his life.

Arbeiter survived Nazi brutality, typhus and hunger as he was forced through a succession of camps including Auschwitz before being liberated by French forces during a death march in Southern Germany, on April 25, 1945, his 20th birthday.

In 1949, he and his wife, Chanka Balter, a Jewish woman who’d sneaked him bread in one of the concentration camps, arrived as refugees in Boston, with their baby daughter in tow. In the U.S. they Americanized their names to Israel and Anna; Arbeiter built a successful tailoring and dry cleaning business with his brother.

He spent the next seven decades of his life guided by his father’s parting words, and strived to carry on Jewish life however he could.

Within months of arriving in Boston, he founded an advocacy organization for Holocaust survivors, now the American Association of Jewish Holocaust Survivors of Greater Boston.

Arbeiter was uncompromising on behalf of survivors, the association’s current president Janet Stein Calm said at his funeral Monday.

Along with the late Stephan Ross, he helped found the New England Holocaust Memorial. As part of his devotion to sharing his experiences with young people, he presided over the annual Israel Arbeiter Essay contest for middle and high school students in public and private schools, overseen by the Jewish Community Relations Council of Greater Boston.

“Izzy dedicated his life to retelling and reliving the horrors he witnessed so that thousands of people of all ages could learn from a survivor,” Marc Baker, president and CEO of the Combined Jewish Philanthropies of Greater Boston, said in a comment emailed to the Jewish Telegraphic Agency.

“Izzy will be remembered as a moral beacon – as a Holocaust survivor who reached out his hand in the name of reconciliation even after all that he had suffered. That will be his lasting legacy,” Nicole Menzenbach, Consul General of Germany to New England, said at the funeral.

Arbeiter understood the power of his firsthand account of the atrocities he lived through. In speaking with students, he would tell them, “You will remember when you heard it from a former Holocaust survivor: Never should you allow this to happen again.”