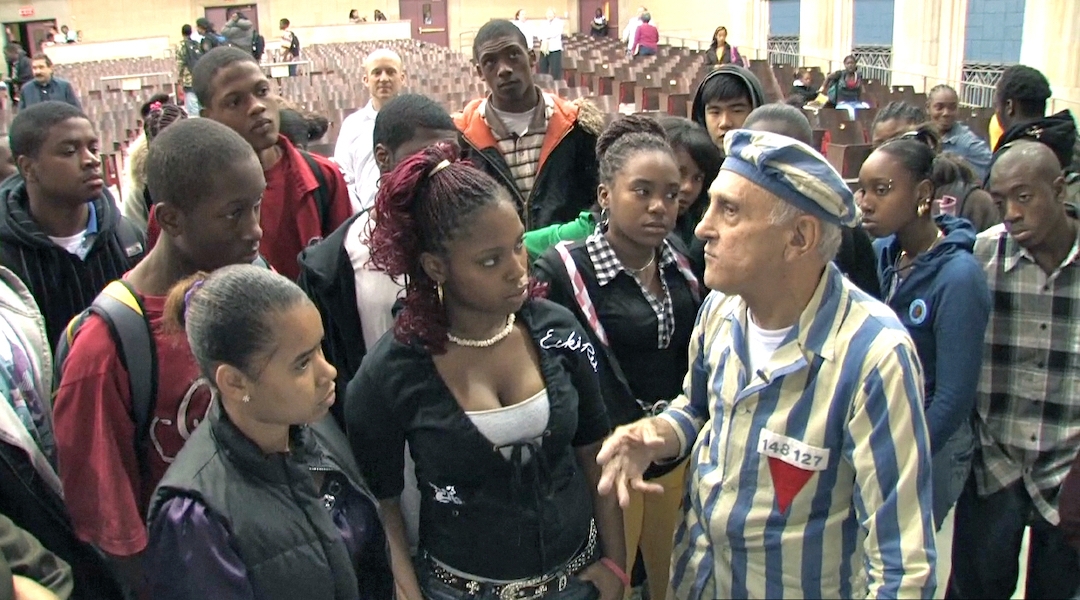 A scene in the documentary "Etched in Glass: The Legacy of Steve Ross," in which Ross is seen speaking to a group of students at a Boston public school. (Tony Bennis)
Advertisement

Ross died Monday at the age of 88, though the destruction by the Nazis of documents in his native Poland makes it impossible to determine the exact year of his birth, according to the Boston Globe.

Sent to a labor camp as a boy Ross, whose original name was Szmulek Rozental, survived 10 Nazi labor and death camps before being liberated from Dachau. The youngest of eight children, he and one brother who died in the 1980s were the only survivors from his family.

“Today Boston lost a giant, and the world quite honestly lost a giant,” Boston Mayor Marty Walsh said Monday on Twitter. “Here’s a man who could have given up several times in his life and he didn’t.”

Today Boston lost a giant, and the world quite honestly lost a giant. Here’s a man who could have given up several times in his life and he didn’t. I’m very sad today at the loss of Steve Ross.https://t.co/9kPztNCvm2

Ross arrived in Boston as a teenage refugee in 1948, completed his education and went to work helping at-risk youth.

Ross led the creation of the New England Holocaust Memorial, which opened in 1995 on the historic Freedom Trail in central Boston. The memorial attracts tens of thousands of visitors from around the world each year.

“The Memorial was Steve’s dream. His indelible, permanent message not just to New England, but to the world,” Rick Mann, chair of the New England Holocaust Memorial Committee, said in a statement by the Combined Jewish Philanthropies and the Jewish Community Relations Council of Greater Boston.

The film “Etched in Glass: The Legacy of Steve Ross,” tells the story of how Ross was reunited with Steve Sattler, the U.S. Army Lieutenant who during the 1945 liberation of Dachau shared a snack and a small U.S. flag with the emaciated teen.

Ross’ funeral will be held Wednesday at Temple Emeth in Brookline. He is survived by his son, Michael, a former Boston City councilor, and Julie Ross.