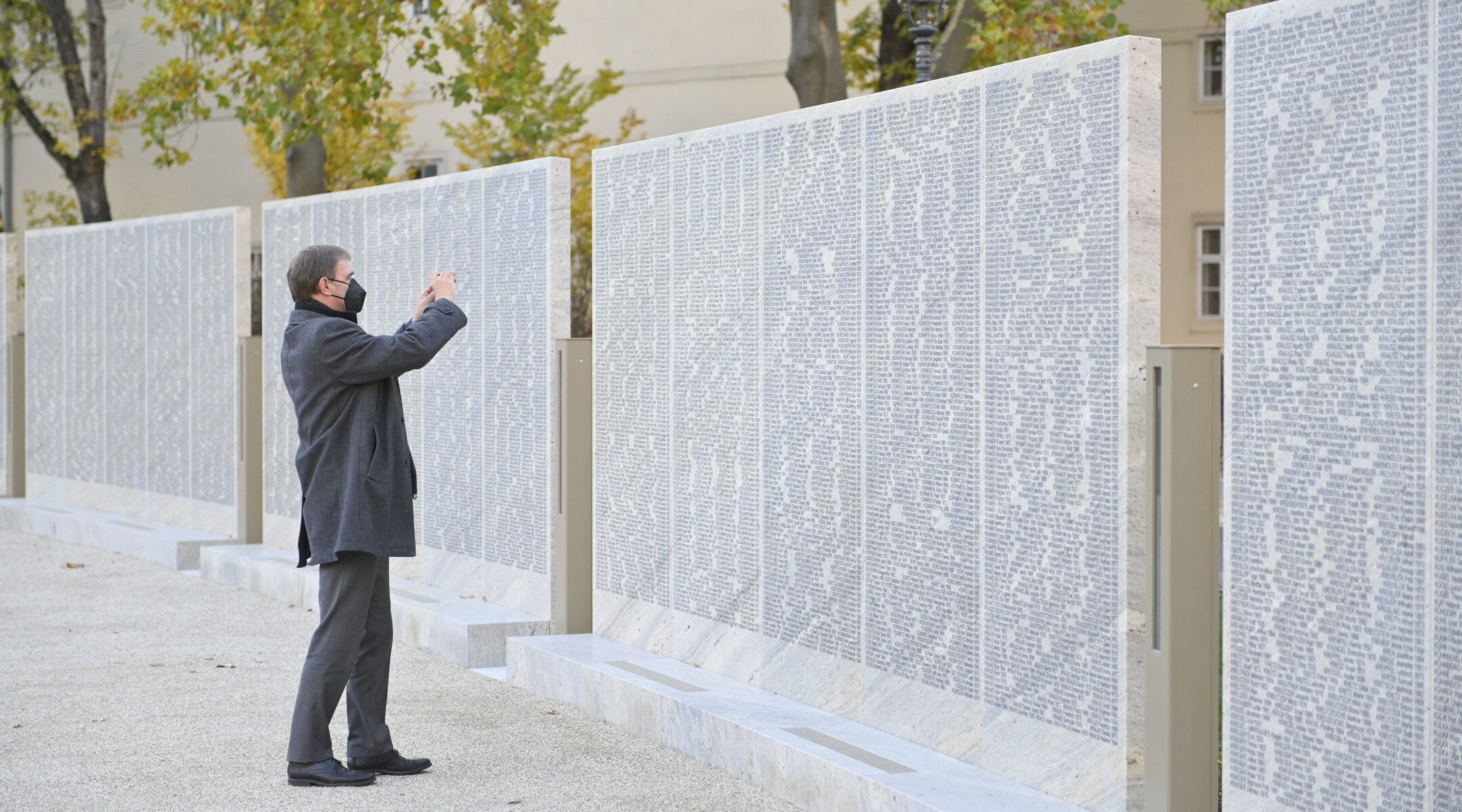 A man takes a picture at the Shoah Name Wall Memorial in Vienna, Austria on November 9, 2021. (Hherbert Neubauer/APA/AFP via Getty Images)
Advertisement

(JTA) — The Austrian government inaugurated a $7 million Holocaust memorial monument on the anniversary of the 1938 Kristallnacht pogroms.

The “Shoah Wall of Names” that city and central government officials unveiled Tuesday in Vienna lists 64,440 Holocaust victims on 160 granite slabs, and is the result of years of lobbying by commemoration activists for a major monument that reflects both the scope of the Holocaust and its individual victims.

Kurt Yakov Tutter, a Holocaust survivor of Austrian descent, initiated the idea for the monument, which in 2018 received government funding and the go-ahead to be built at Ostarrichi Park near the National Bank, an Austrian news outlet reported.

“The Republic of Austria is sending out a visible sign of its responsibility,” Karoline Edtstadler, a cabinet minister in charge of the Chancellor’s office, said in a statement ahead of the unveiling ceremony Tuesday. “The victims are given their names and thus at least part of their dignity. And we realize that behind the 64,440 names there are individual people – children, mothers, fathers and neighbors – with individual stories and human fates.”

Austrian governments had maintained until the early 2000s that the country, which Nazi Germany in 1938 annexed without bloodshed amid mass displays of enthusiasm by the population, was primarily a victim of Adolf Hitler’s Germany, rather than a willing collaborator.

But amid criticism on this attitude, Austrian leaders have since acknowledged their nation and society’s active role in the murder of about 65,000 Austrian Jews, the vast majority of the country’s Jewish population in 1938. About 50,000 of the victims came from Vienna. Austria had a Jewish population of more than 170,000 before the annexation; most escaped, but around 12,000 were murdered in other Nazi-controlled countries.

Austrian soldiers fighting in Hitler’s military forces were involved in the murder of thousands of non-Austrian Holocaust and war crimes victims.

The Kristallnacht pogroms of 1938 were particularly violent in Austria, where hundreds of Jews were made to clean sidewalks as crowds cheered at their humiliation. Many historians see the pogroms, which Nazi Germany initiated, as both a trial balloon and opening shot of the genocidal violence of the Holocaust.