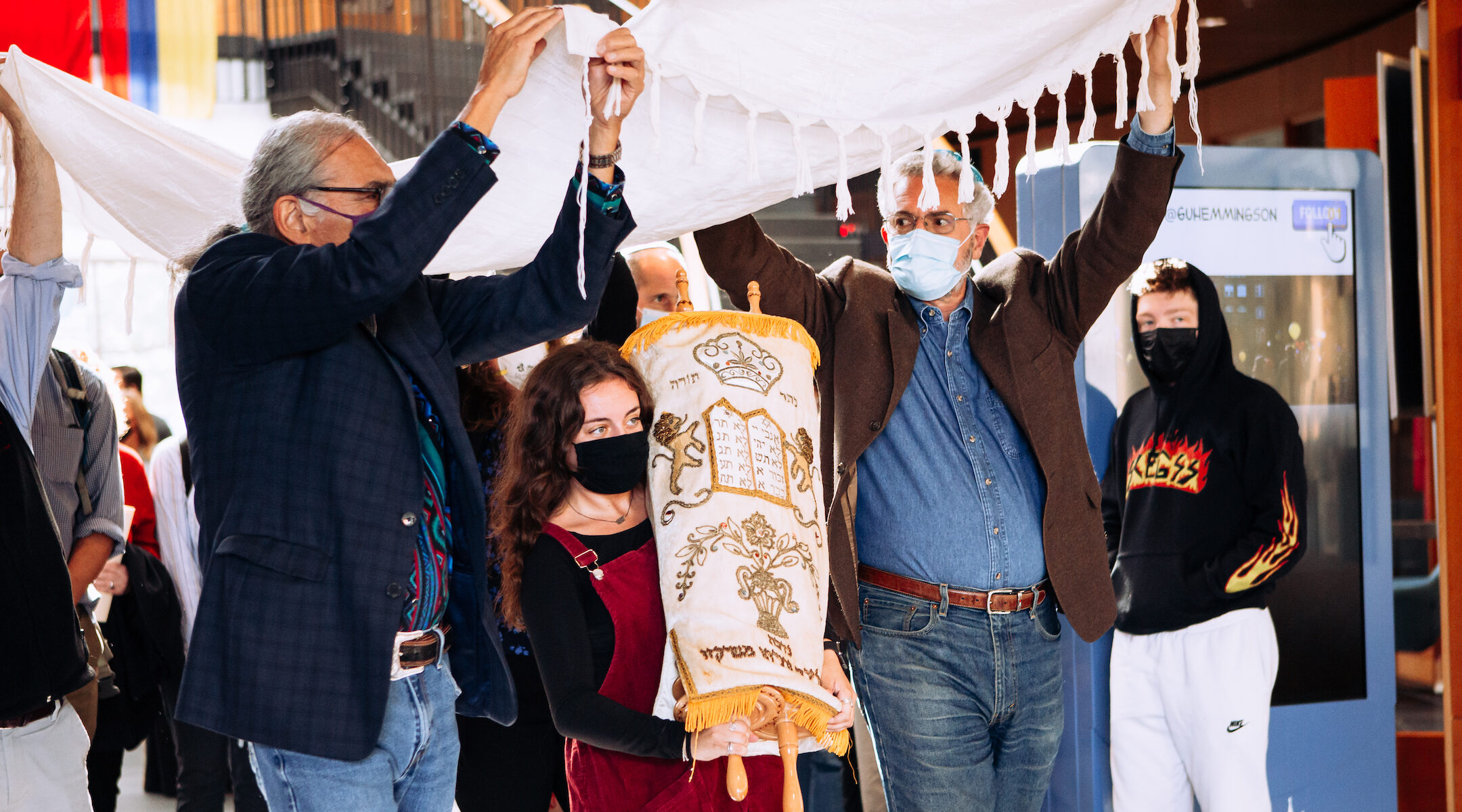 Jewish students and faculty at Gonzaga University in Spokane, Washington, celebrate the inauguration of a "Jewish Sacred Space" at the school, along with the arrival of its first-ever Torah, Oct. 2, 2021 (Chiana McInelly)
Advertisement

SEATTLE (JTA) — Eastern Washington is a region that, for the last half a century, was far better known for its hate groups than its Jewish community.

Spokane and the surrounding area was infamously a hotbed of racism from the 1970s through the 1990s, a period that included multiple acts of vandalism and neo-Nazi intimidation at the local Conservative synagogue, Congregation Beth Shalom. On the outskirts of the community that encompasses Spokane and resort town Coeur d’Alene, Idaho, sat the 20-acre Aryan Nations compound in Hayden Lake, Idaho. Until it was shuttered in 2000 following a lawsuit led by legal advocacy organization Southern Poverty Law Center, the compound was a hub for hate groups worldwide, including the Ku Klux Klan.

And yet, it’s in this area where Gonzaga University, a private Jesuit school in Spokane, recently celebrated the arrival of its first-ever Torah scroll and the dedication of an area the university has deemed its “Jewish Sacred Space.”

“The attitude toward Jewish people is very open and kind. It’s amazing,” said Carla Peperzak, a 98-year-old Holocaust survivor from Amsterdam and social justice activist who now lives in Spokane.

Rabbi Elizabeth Goldstein, a professor of religious studies at Gonzaga, was instrumental in creating a Jewish presence on campus for its estimated 40 to 60 enrolled students who identify as Jewish.

“There was no Hillel, no real infrastructure for me to start to do that work,” she said. “But over time, I found the Jewish kids, and they found me.”

But without a central space, Jewish students still struggled to get together. Hannah Zeva Presken, a senior at Gonzaga and the current president of the Jewish Bulldogs, felt the absence of a Jewish community. So she strove to build one.

“Students spend all day at classes and don’t typically want to come to Shabbat services at 7:30 on a Friday night,” Presken said. “I reworked the Jewish Bulldogs, so it’s more of a cultural and social community. It’s changed the whole dynamic.” 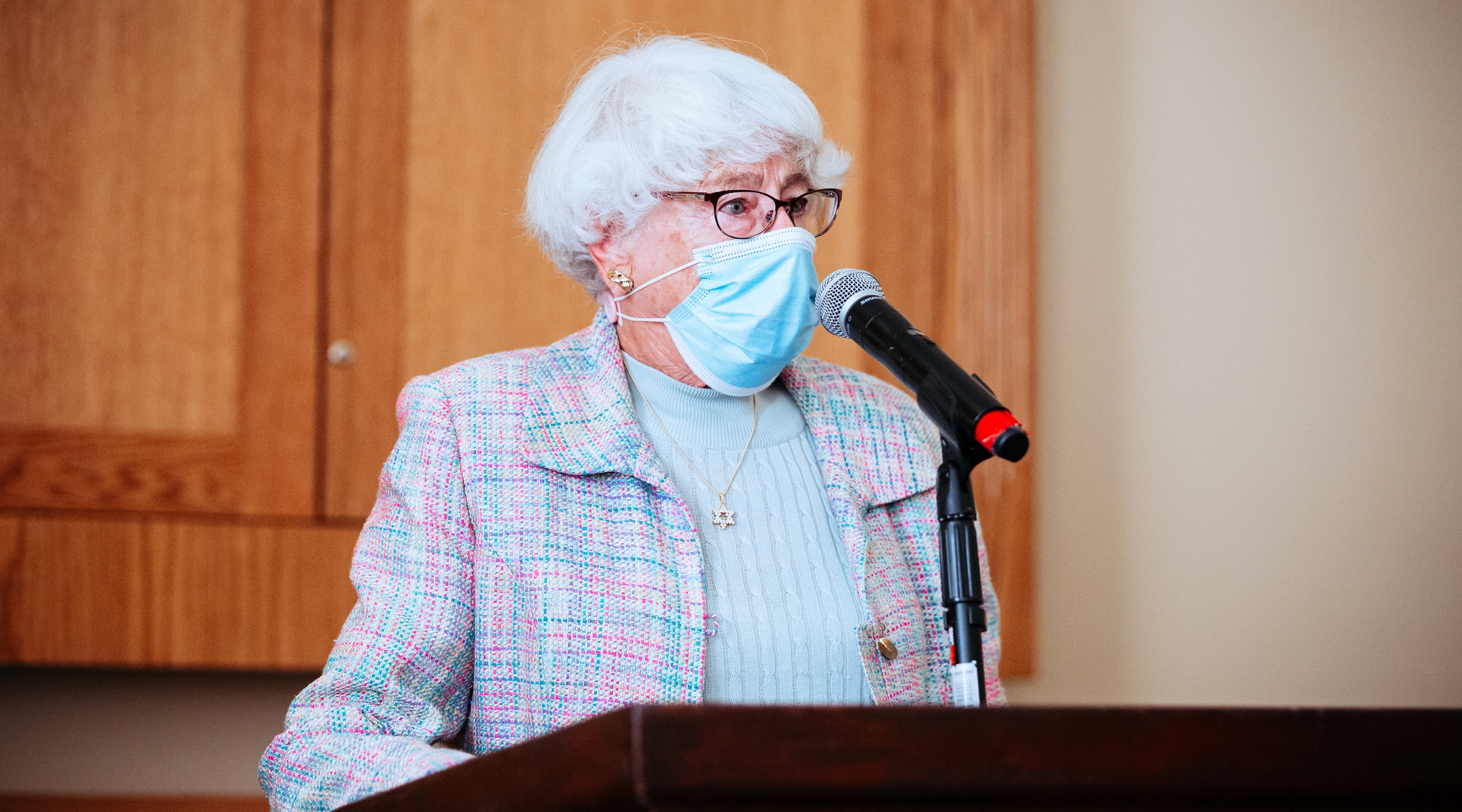 The increase in Jewish studies and budding community were attractive, but students still didn’t have a way to gather for services or holidays, which Goldstein thought was integral to a full Jewish life on campus. She set her sights on acquiring a Torah for the school.

“I put the Torah at the center [of this effort], then I thought, ‘Where are we going to put this Torah?’ Out of that came the idea for the Jewish Sacred Space,” said Goldstein, who is also the Jewish chaplain in Gonzaga’s Office of Mission and Ministry, as well as a substitute congregational rabbi at Beth Shalom and Congregation Emanu-El, a Reform temple in Spokane.

Goldstein came upon an empty non-denominational chapel on the third floor of College Hall, one of Gonzaga’s oldest buildings, built in 1898. The space was across the hallway from a Muslim prayer space and behind the Catholic chapel. The corridor is now casually referred to as the Interfaith Hallway.

Creating the Sacred Space was a community effort. Goldstein, Presken, other Jewish faculty and a set designer for the college’s Performing Arts Center designed the ark that would house the Torah. The Center’s set builder crafted the ark, a wooden, rectangular piece with the Hebrew letters “Eitz Hayyim” (Tree of Life) on the doors. The room is long and narrow with a bookshelf that houses a multi-volume Talmud and other books. Windows overlook Gonzaga’s campus, green with trees and manicured bushes.

Volunteers, like students Presken and Isaiah Krigel, helped raise around $15,000 in donations for the Torah scroll, according to a Gonzaga news story. A dedication ceremony was held on Oct. 1 following the arrival of the Torah from Sofer-on-Site, an organization that rehabilitates damaged Torahs and employs scribes to create new ones.

Some attendees took turns cradling the scroll and carrying it beneath a tallit, or prayer shawl. Several people spoke about the meaningfulness of the Torah and Sacred Space, including Rabbi Goldstein, Peperzak, Beth Shalom Rabbi Tamar Malino and University president Thayne McCulloh.

“In my long life I have never had the privilege to be a part of such an important event. The fact that a Catholic university will be home to a Torah is indeed a great happening – my heart is joyous,” Peperzak said at the event. “It also reminds me of the time so many years ago when Jews in the concentration camps literally risked their lives reading and studying in the deepest secrecy. Why? It bonded them to their parents, spouses, children and relatives. And it also gave them hope, and hope was all they had.”

Krigel, who is a junior and a member of the Jewish Bulldogs, believes the new space and scroll will inspire other Jews to enroll.

“With this Torah, a lot more Jews will come to Gonzaga because it’s a very open school and accepting of everyone,” he said.

Shabbat services are being held in the Sacred Space, as well as a weekly Jewish Chant and Meditation. During a recent Fall Family Weekend service, Presken’s mother read from the new scroll, which was an emotional moment for her family.

Spokane and Northern Idaho’s evolution of acceptance continues to be a work in progress. Last February Raymond Bryant, a member of the neo-Nazi group 14First Foundation, spray-painted swastikas on Beth Shalom and defaced a Holocaust memorial — an echo of the region’s recent history. In 2020, the Southern Poverty Law Center tracked 22 hate groups throughout Washington State.

In the wake of increased antisemitism nationwide, Spokane Jewish activism has increased. Beth Shalom, Emanu-El and the Chabad of Spokane hosted talks by Holocaust survivors at the Spokane Convention Center in 2018. This month, Presken gave a talk during a first-year student retreat about her experiences being a Jewish student at Gonzaga. She said it was the first time there had been a narrative about what being Jewish is like at the university.

“I used to feel like I wasn’t Jewish when I was here, but that’s completely changed,” she said. “It’s given me an entirely different perspective on what being Jewish means. Now, when I’m with other Jewish people, it’s an instant connection.”

Even though Goldstein has been at Gonzaga since 2010, this is the first time that she has felt like she “fully belonged in body and soul. This Torah, this Jewish space…I’ve never felt so at home. There’s a space for me, and I think a lot of Jewish kids feel that way.”