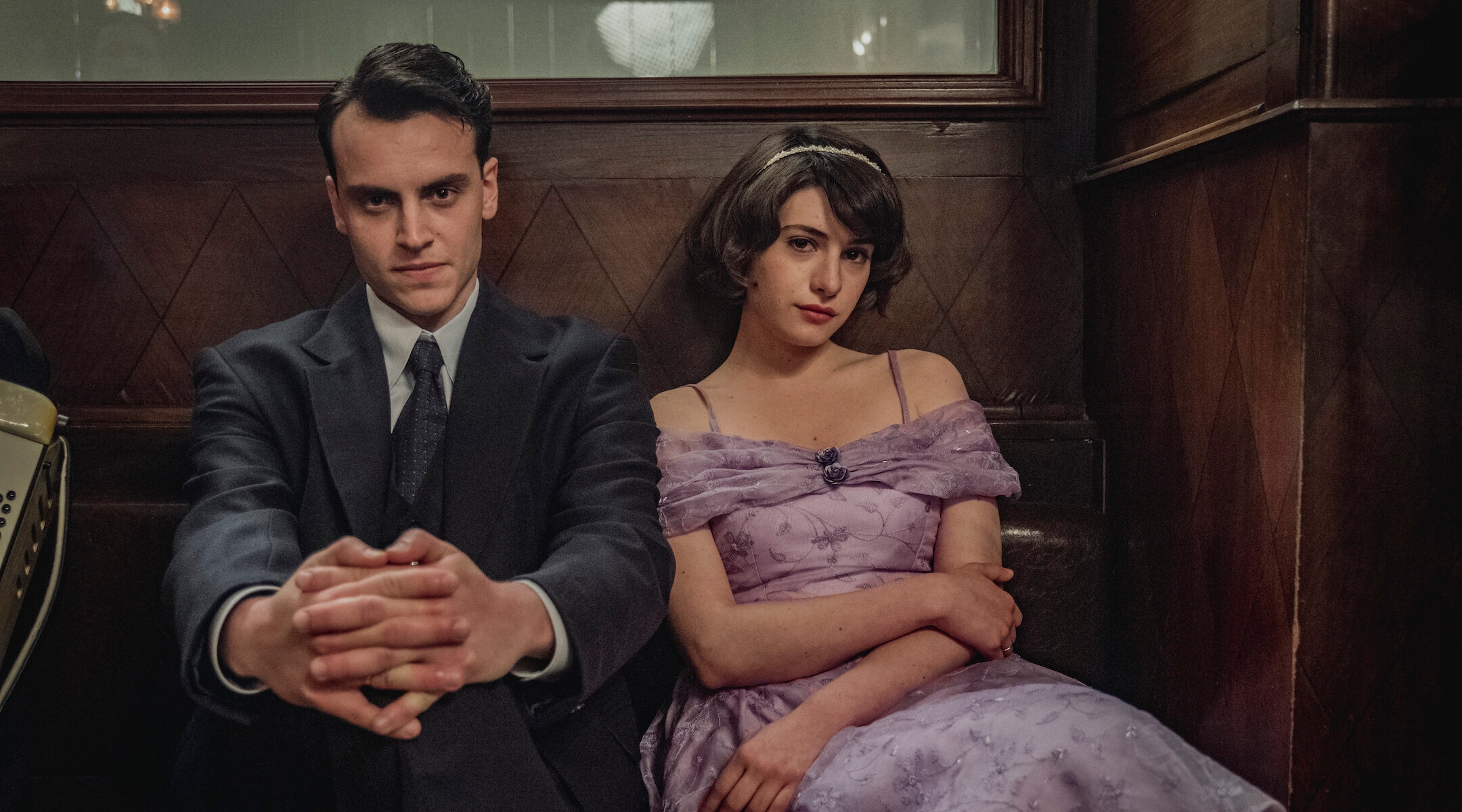 Ilker Kiliç, left, as Mordo, and Asude Kalebek as Raşel in "The Club." (Netflix)
Advertisement

“The Club” is a Turkish drama about a Sephardic family in 1950s Istanbul, and it’s both reshaping what representation feels like for the roughly 15,000 Jews living in Turkey today and offering American audiences a window into an underexplored corner of the Jewish world.

The first episode of “The Club” (translated from “Kulüp”), which debuted on Netflix Nov. 5 and is available to view for U.S. subscribers to the streaming platform, begins with a Hebrew sabbath prayer and ends in a Ladino song. It only dives deeper from there, weaving the intricacies of Jewish observance and the country’s ever-present struggle between minority acceptance and assimilation into its plot.

From discussion of Shabbat rules, to the tradition of kissing a mezuzah when entering a room, to the scenes shot in Turkish synagogues, many Turkish Jews have found the show a revelation — especially given the fact that Jewish characters are usually relegated to stereotypes in Turkish productions. Turkish is the main language of the series, but there is some Ladino — the historical language of Sephardic Jewry, a mixture of medieval-Spanish, Hebrew and Aramaic alongside Turkish, Greek, Arabic and other languages — in every episode.

It’s not just Jews who are watching either, as the show has become popular across a large swath of Turkish society.

While the series can be at times convoluted and its ultimate resolution underwhelming, the show’s real strength lies in the world of Turkish minorities that it depicts. Its characters’ names make that clear — there is Agop (Armenian); Yanni, Tasula and Niko (Greeks); and of course, Matilda, Davit, Raşel and Mordo (Sephardic Jews).

Much of “The Club” takes place in the Istanbul neighborhood of Galata, colloquially known as Kula, a site that evokes a strong sense of nostalgia for Turkish Jews. Today it is one of Istanbul’s biggest tourist attractions, thanks to its eponymous tower, but in the era in which the show is set, the neighborhood was home to a large and close-knit Jewish community, where one was as likely to hear Ladino on its twisting streets and alleyways as Greek or Turkish.

To get the setting right, the show’s producers brought on many prominent Ladino speakers from the Turkish Jewish community, including theater actor Izzet Bana, actress Forti Barokas and Karen Şarhon, also an actress and editor of the last printed Ladino language magazine, El Ameneser. They and several other members of the Istanbul Jewish community had small roles in the series.

“I saw in the show five or seven people that I know in person,” Haligua said. “So of course, I felt a belonging to the story.”

Set in the 1950s, the plot follows Matilda (played by Gökçe Bahadir), a Sephardic Jewish woman who has just been released from prison, her daughter Raşel (pronounced Rashel, and played by Asude Kalebek) and the other workers of the titular nightclub, Club Istanbul, where Matilda finds herself working.

When the viewer first meets Matilda, she has been locked up for a murder she committed as a teenager. The identity of the victim and her motive start off unclear, but as one mystery is revealed, another is introduced.

Jewish themes emerge throughout the drama. An early bit of conflict comes between Matilda and her main foil, the brutish Çelebi (pronounced Chelebi and played by Firat Taniş) when the latter forces her to work through the start of Shabbat on her first week at the club.

“Ah, that day when you people don’t even touch a light switch,” Çelebi smugly says before switching them off, leaving Matilda working in the dark with Shabbat approaching.

Episodes later, Çelebi’s true back story is revealed in the midst of a Purim party, and quickly followed with a monologue deftly delivered by Bana, a veteran of Ladino theatre.

“You must know what Purim is, Matilda,” Bana’s character Haymi says. “It is the holiday of contradictions, the revealing of that which was hidden.” 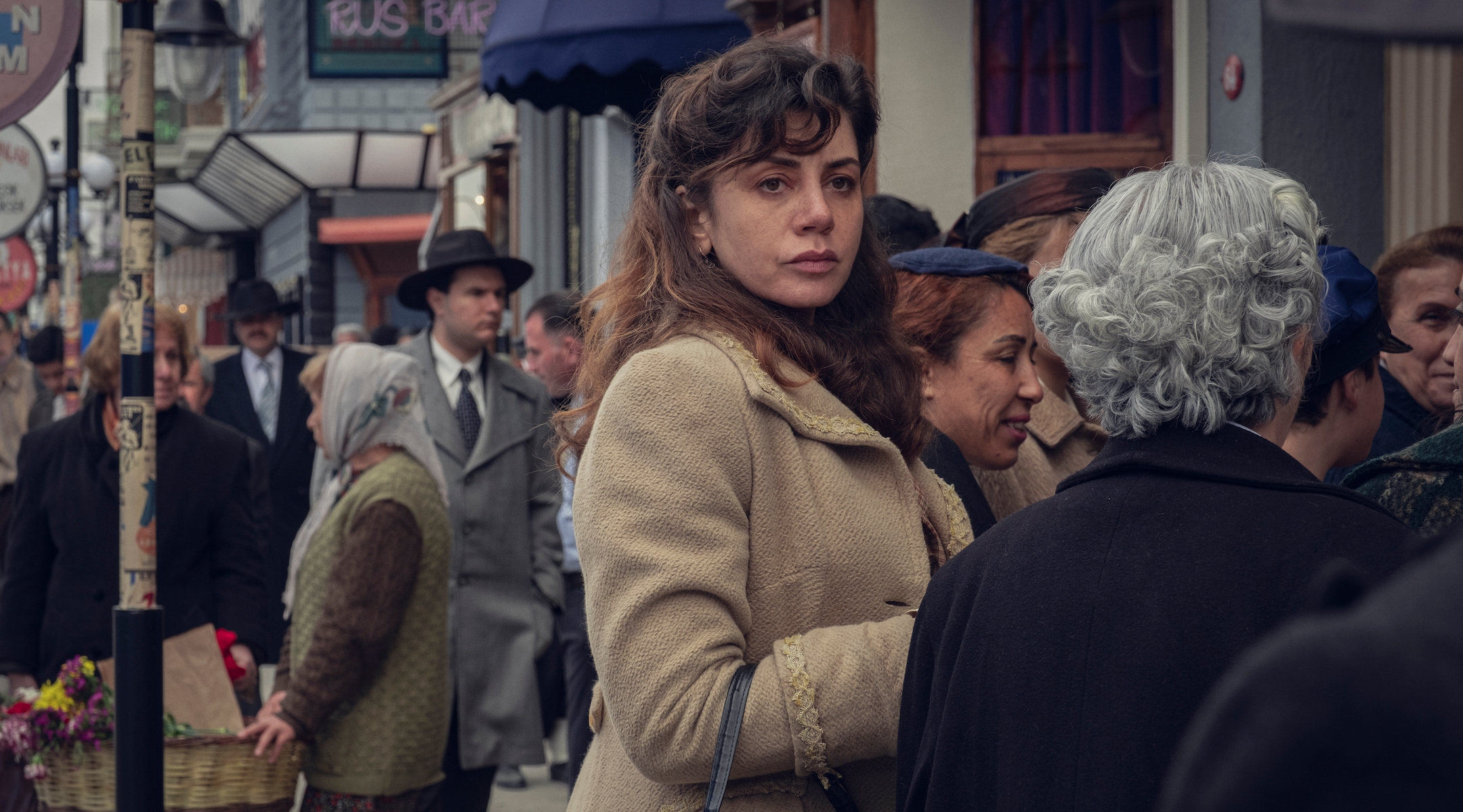 The six-episode series isn’t director Zeynep Günay Tan’s first experience with Jewish audiences. One of her past projects, “The Bride of Istanbul,” became a smash hit in Israel, where Turkish soap operas have become increasingly popular in recent years.

Since the Arab Spring a decade ago, Turkey’s film and television industry has replaced Egypt’s as the largest and most influential in the Muslim world. But even though Turkey has a sizable Jewish population, unlike Egypt, the shift had not translated into meaningful representation.

“Until today, we had only heard the names of these people on Turkish television: The textile merchant Nedim, pawnbroker Solomon, Mossad agent Moshe, Jewish businessman Mison, etc,” wrote Gabi Behiri, an Istanbul-born Jew, on Twitter in Turkish last week. “In other words, a uniform and generalized Jew was shown to people living in Turkey, using all of the known antisemitic tropes.”

In contrast, “The Club” portrays its Jewish characters, both rich and poor, in a largely sympathetic light.

“One of the major things people were really happy about was that the Jewish characters weren’t shown as evil or as a kind of loan shark,” Haligua said. “It was one of the first times that all minorities and non-Muslim people were represented, not as evil, or the enemy, but actually as victims of the politics of Turkification,” or the practice of forced assimilation that has characterized much of Turkish history.

“That was kind of a milestone,” he added. “And not only for Jewish people, also Armenian people and Greek people.”

The show tackles another taboo from Turkish history: The timeframe places the show in the aftermath of the infamous wealth tax of the 1940s and the 1955 Istanbul Pogrom.

The wealth tax, or Varlik Vergisi, was a policy of the Turkish Republic instituted in 1942. Its stated purpose was to fund a standing army in case Turkey was invaded by either the Nazis or the Soviet Union. In reality, the goal turned out to be a transfer wealth from non-Muslim minorities, who were prominent in Turkey’s merchant classes, to the Muslim majority.

As such, while Muslims were taxed at a rate of less than 5% on the value of their non-movable assets, Jews and Greeks saw rates well over 100%. Armenians were hit harshest of all with rates over 200%. For many, that surpassed their entire wealth, and those who could not pay within 15 days were sent to labor camps near the town of Aşkale in Eastern Turkey. At least a thousand people toiled there and dozens were ultimately worked to death.

The law destroyed the financial wellbeing and security of many of Turkey’s minority communities, accelerating an exodus of Turkish Jews.

Nearly half of the Turkish Jewish population departed the country between 1948 and 1951, following the establishment of the state of Israel. The 1955 Istanbul pogrom, which was mainly aimed at the Greek population but affected Jews and Armenians as well, also prompted thousands more to emigrate.

The pogrom was incited by the government of then-Turkish premier Adnan Menderes and his ruling Democrat Party. Over the course of the Sept. 6 and 7, 1955, thousands of rioters who had been trucked into the city were frenzied by fake news reports that Greek nationalists had bombed Turkish consulates in Greece and the childhood home of modern Turkey’s founding father, Mustafa Kemal Ataturk, in Thessaloniki. For nine hours they assaulted Greek neighborhoods — which were often side by side with Jewish and Armenian ones — killing over a dozen people and damaging thousands of properties, including 73 churches, two monasteries and a synagogue.

Menderes would be ousted from power in 1960 by a military coup.

In “The Club,” the viewer quickly learns that the wealth tax is what destroyed Matilda’s once happy family, sending her brother and father to Aşkale to be worked to death.

That story is known by most Turkish Jews, but not outside of the community, as the topic has been near untouchable in Turkish public discourse for nearly eight decades.

“People had no idea about what the wealth tax was,” Betsy Penso, another Istanbul-born Jew and writer for Avlaremoz who is currently living in Israel. “We try to explain this to our friends and even they fail to understand it because it is never taught in schools.”

Thanks to “The Club” and its popularity in Turkey, that may be changing. Avlaremoz has frequently written about the tax and its impact, including a special series of articles on it this spring. Since the show’s release, Penso said the site has seen a flood of new readers.

“We have been talking about the wealth tax for at least five years now, but we could only reach the people who were really already interested,” Penso said. “Now people who had no idea, or weren’t interested, are making their own research.”