Turkish newspaper tries to save a dying Jewish language 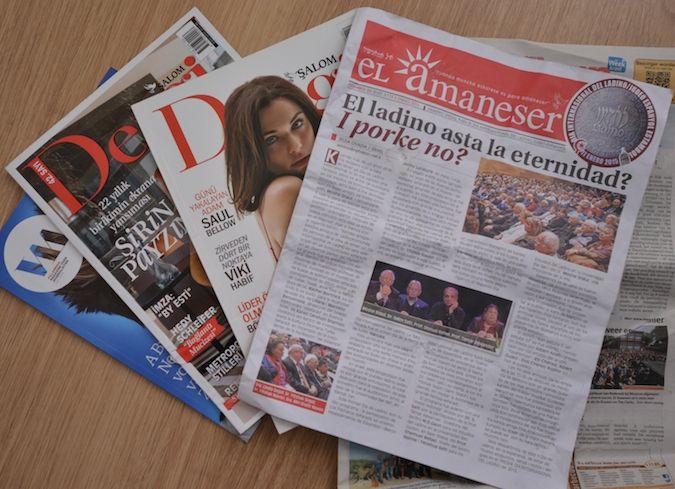 ISTANBUL (JTA) — Every time she prepares her newspaper for print, Karen Sarhon has her pick from dozens of submissions she receives daily from writers around the world.

A desirable situation for any editor-in-chief, Sarhon says it is nothing short of unbelievable for her monthly, El Amaneser, which is the world’s only newspaper in Ladino — a Jewish-Spanish language teetering on the brink of extinction.

“In the 1970s, Ladino was truly a dying language, but El Amaneser is among the relatively new initiatives giving Ladino a new lease on life,” said Sarhon, a Turkish-Jewish linguist who launched the Ladino publication 10 years ago as part of her work at the Turkish Jewish community’s Ottoman-Turkish Sephardic Culture Research Center.

Sarhon’s center was founded as Jews worldwide, and especially in Israel, grew alarmed at the prospect of Ladino’s disappearance and mounted an international effort spanning four continents to preserve it. The effort to preserve the language also has gotten a boost from Spain’s push to export its culture and language abroad through its Cervantes Institute – and from popular nostalgia for Sephardic culture.

Ladino is spoken by about 100,000 people, most of them in Israel, according to Israel’s Association of Translators. Other estimates say the number of Ladino speakers worldwide may be more than twice that number. Whatever the exact figure, Ladino is not being passed on to the next generation – partly because these Ladino speakers are dispersed in countries dominated by other languages.

Starting in the mid 1990s, language classes and online forums promoting Ladino began popping up in Israel. In 1996, Israel’s National Authority of Ladino was established, and in the early 2000s two Israeli universities, Bar-Ilan and Ben-Gurion, began teaching the language.

These conditions allowed El Amaneser to recruit writers from Turkey, France, Argentina, Chile, Israel, the United States and Britain, who every month send in far more material than the paper can print in its 24 pages.

With no more than 2,000 readers in Turkey and another 300 worldwide, El Amaneser is not exactly a moneymaker. It exists as a nonprofit, like most other bodies that were set up over the past 30 years to save Ladino from oblivion.

But whereas most of these bodies have state or university funding, El Amaneser exists thanks to the resources of Turkey’s small Jewish community and Salom — the country’s Jewish weekly, which prints El Amaneser and houses its offices in its building. Unlike most Diaspora Jewish newspapers, Salom actually generates a profit, and, aside from funding El Amaneser, Salom distributes the Ladino paper for free to Salom’s 4,500-odd subscribers. It’s not clear how many of them actually can read Ladino. Originally written in Hebrew letters, the language has been transliterated into Latin letters for the past 30 years.

For Turkish Jews, preserving Ladino is a historical obligation, says Sami Aker, a journalist at Salom. He notes that Ladino was developed in the Ottoman Empire by Sephardic Jews who arrived as refugees in the 15th century after fleeing the Spanish and Portuguese Inquisitions.

“Contrary to common misconceptions, Sephardic Jews didn’t speak Ladino in Spain and Portugal; they spoke their local dialect over there,” Sarhon said. Only after they came to the Ottoman Empire did they begin using Ladino, “which is very much an Ottoman language,” she said.

While most immigrant populations lose their native language within four generations, Ladino has survived for centuries. It was so widely spoken among Turkish Jews that it was chosen over Turkish as the language for Salom when the paper was founded in 1947.

But Ladino readership diminished as young Turkish Jews either left for Israel or integrated into Turkish society. Salom switched to Turkish in 1984, keeping Ladino alive only in one weekly page and in the framed, yellowing front pages that adorn the walls of the paper’s headquarters in downtown Istanbul.

Ladino did not fare any better in Bulgaria, where Jews spoke the language until recently (Bulgaria, too, used to also be part of the Ottoman Empire). Claire Levy, a Bulgarian Jew, recalls how the language died out within her family, like many other Jewish families, when everyone left for Israel in the 1950s except for one Ladino-speaking aunt.

“Later on, she married a Bulgarian guy and stopped speaking Ladino altogether,” Levy said on TalesofLadino.wordpress.com in 2012.

In Turkey, preserving Ladino is not the most pressing issue for a community concerned about its future amid rising Islamism and the anti-Israel – and, some say, anti-Semitic – tirades of Turkey’s president, Recep Tayyip Erdogan, and his cronies. After two Istanbul synagogues were bombed in 2003, Salom added new security measures at its headquarters, which are now housed in a nondescript building under constant guard and equipped with massive, blast-proof doors. 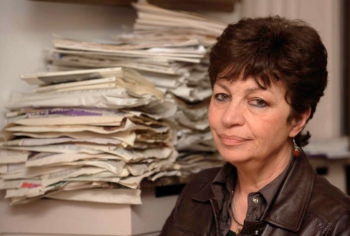 Claire Levy in Sofia in 2012. (Courtesy of talesofladino.wordpress.com)

Turkish Jews’ stake in preserving Ladino — a language rich with humorous expressions, songs, jokes and poetic metaphors – is understandable considering how intricately woven into their communal identity the language has become. To this day, Ladino phrases pepper the conversations of Turkish Jews, not unlike the way American Jews or Israelis use Yiddish. Turkish Jews use Ladino references for everything from domestic items (“pantofeles” for slippers) to insults (“jandaracho,” which can mean floor mop, or a submissive person).

Though El Amaneser has relatively few readers, the fact that it is published at all is itself an important element of Ladino culture, says Eliezer Papo, a scholar on Balkan Jewish history at Ben-Gurion University of the Negev in Israel.

“The amount of Ladino-language papers printed in the Ottoman Empire was staggering and completely outsized when compared to the output of other minorities,” Papo said. “We’re talking about up to eight or nine publications per medium-sized community of Ladino speakers.”

Fitting for a language famous for its humor, each community had at least one satirical publication.

“No one depends on El Amaneser for their news, because hardly anyone speaks Ladino as a first language,” Papo said, “Yet from a nostalgic point of view, Ladino needs at least one newspaper to stay alive.”

In explaining what El Amaneser means to Turkish Jews and Ladino speakers, Papo recalls the origins of the paper’s name: A Ladino saying that speaks of how the night’s darkest hour occurs just before the break of dawn.

“Just as Ladino disappears into the darkness, its devotees at El Amaneser and elsewhere are making sure it has more time in the sun,” Papo said.