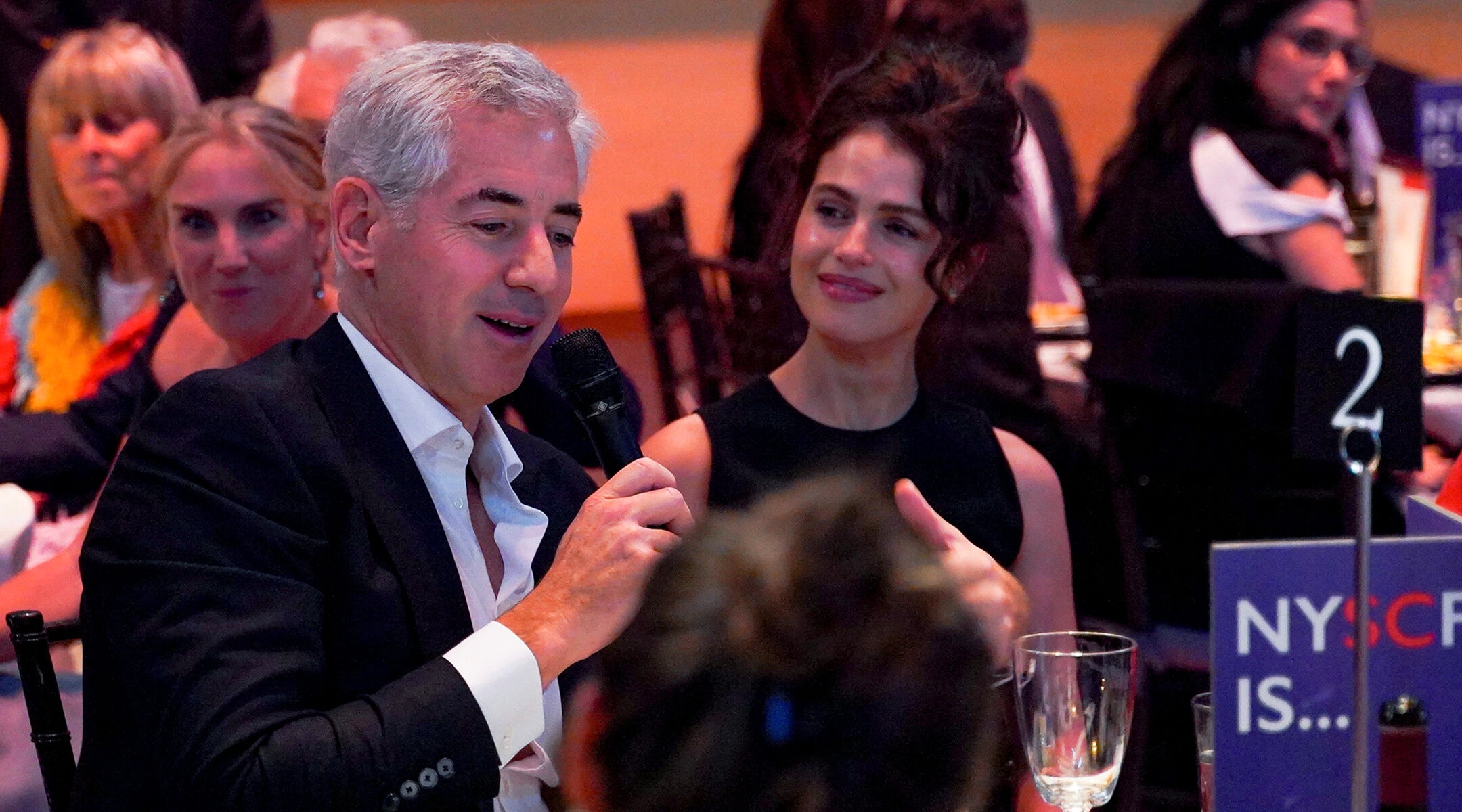 Billionaire William Ackman, left, and wife Neri Oxman, an Israeli-American designer and professor, are at the center of a real estate controversy on the Upper West Side. (Sean Zanni/Patrick McMullan, via Getty Images)
Advertisement

(New York Jewish Week via JTA) — Neighbors are objecting to the two-story glass pavilion that hedge fund manager Bill Ackman and his wife, the Israeli-born architect and designer Neri Oxman, want to build on the roof of their apartment building on Manhattan’s West 77th Street.

The dispute has pulled in some high-powered neighbors and advocates on both sides, including legendary PBS journalist Bill Moyers (he’s against) and a small “Who’s Who” of prominent Jewish New Yorkers, according to The New York Times.

Columnist Gina Bellafante reports that the dispute isn’t about historic architecture, sunlight or other similar flashpoints in New York city zoning disputes. It’s actually about what, if anything, the city will do to limit the increasing power of its billionaire class. A three-hour debate over the proposal in the Landmarks Preservation Commission, Bellafante wrote, was “about where the retaining wall ought to be erected against the desires of the magnificently wealthy to configure the world precisely to their specifications.”

Ackman made a giant windfall in March 2020 by betting that COVID would crash the economy. The Haifa-born Oxman, who teaches at MIT, has drawn wide praise for her pioneering work fusing principles of nature and sustainability into her designs. The couple — who were introduced by Marty Peretz, the former publisher of The New Republic and co-founder of TheStreet.com — were married at Central Synagogue in January 2019. Ackman has donated large sums to a range of Jewish causes, from the Center for Jewish History to Birthright.

Among their supporters at the Landmarks Preservation Committee meeting were many prominent Jews, including architecture critic Paul Goldberger; Louise Mirrer, the president of the New-York Historical Society and expert on medieval Spanish Jewry; and Betsy Gotbaum, the Historical Society’s former president and the New York City Public Advocate from 2002 through 2009. The former owner of the property was media executive Norman Pearlstine.

The dispute is playing out against the media’s and public’s obsession with billionaires and their spending — including, but not limited to, the HBO series “Succession,” recent self-funded trips to outer space by Jeff Bezos and Richard Branson, and Congressional debates over increasing taxes on the very rich. Manhattan, where new luxury “supertall” apartment buildings are changing the landscape, is at the center of the discussion.

As Bellafante reports it, the city’s landmarks commission asked Ackman and his architect, the British “starchitect” Norman Foster, to submit a new plan for the rooftop pavilion with a smaller second story.