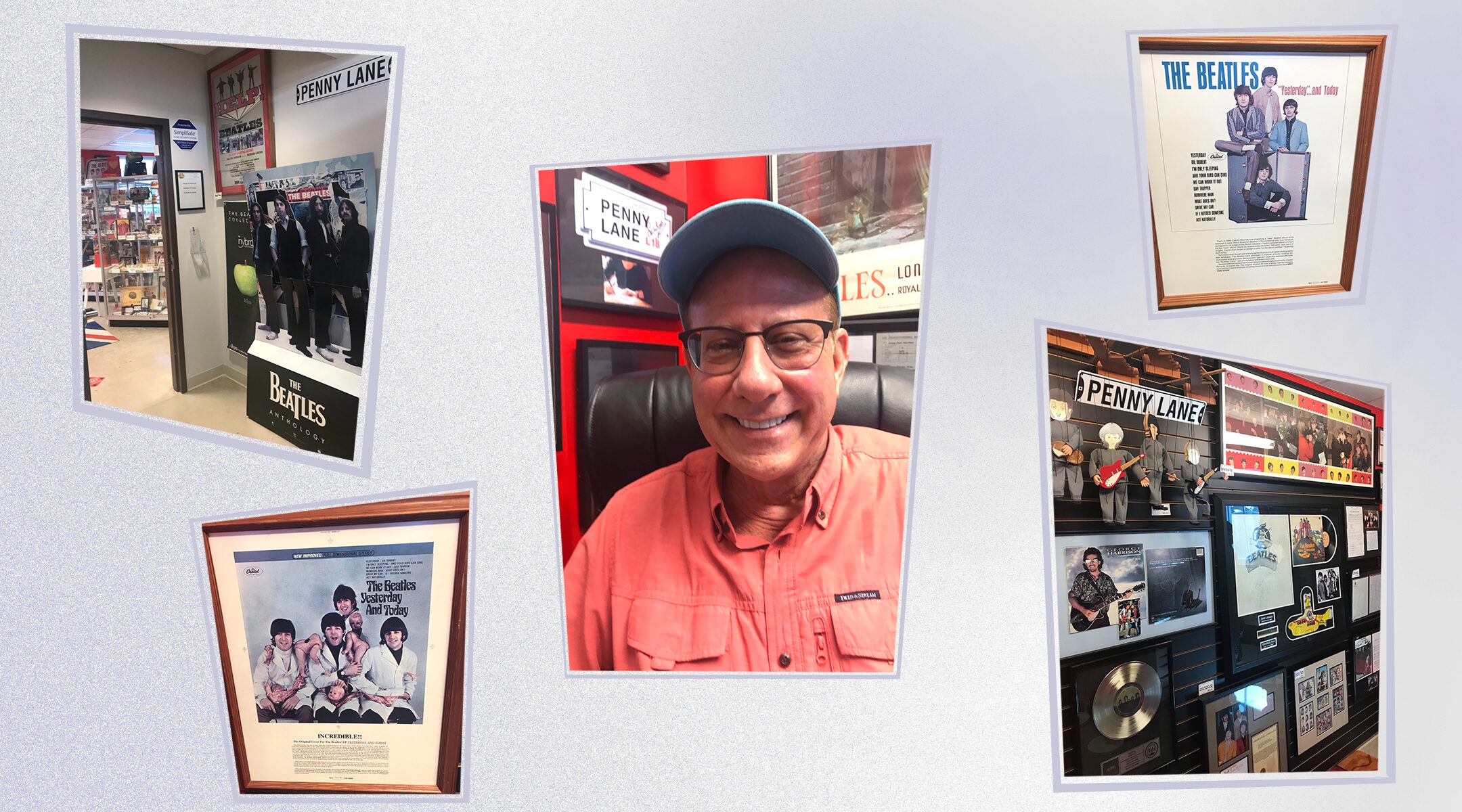 A portion of the exhibits at the Penny Lane museum and Bobby Entel, founder of the museum. (Barstad Communications via Jewish Press of Pinellas County)
Advertisement

(Jewish Press of Pinellas County via JTA) — Bobby Entel didn’t watch The Beatles’ Feb. 9, 1964 performance on the Ed Sullivan Show. He was seven years old at the time and in bed. Nor did he ever see them in person, visit their hometown of Liverpool, or cross Abbey Road.

But he’s more than made up for that. When he’s not working as a radiologist in Dunedin, Florida, he can often be found at Penny Lane, the free museum he opened in 2018 that features his extensive collection of Beatles memorabilia. That’s where he goes to escape the realities of life.

“This is my happy spot, my relief area,” Entel said, seated in a nook at Penny Lane while “Something” from the Abbey Road album played softly in the background and a pair of nearby tourists studied a guitar signed by Paul McCartney. “It’s a very fulfilling hobby and a labor of love.”

There are several museums dedicated to The Beatles in England and one in Holland. But except for a floor dedicated to them at the Rock and Roll Hall of Fame in Cleveland, Entel believes his is the only permanent Beatles exhibit in the United States. “In the years we’ve been open, nobody’s ever come in and said, ‘You should see the one in New York or Wyoming.’”

England is where Entel’s fascination with The Beatles began in earnest.

“My interest in them evolved from just liking their music to being intrigued with their cultural influence, the impact they had on politics, on hair styles, on clothing and on the music world,” he said. “It happened for me over a period of time…and I didn’t start collecting anything until I was in my 20s and spending a few months as a medical student in London.”

Entel bought his first Beatles memorabilia at the Portobello Road Market in London and brought them home to Florida, where he started going to flea markets and antique stores in the Tampa Bay area where he usually found lower-end items – buttons, pins, records.

“I’d also meet people who’d say, ‘I know a dude who’s got a bunch of Beatles stuff he wants to move out. Want his number?’ And I’d say, ‘Sure,’ and I’d offer maybe a hundred bucks for a whole care package of junk that maybe had a few good items.”

By the time Entel was in his 30s, his Beatles collection had outgrown the closet space he had allotted to it. He started decorating his walls and buying more expensive and rare items from online auction houses like Heritage and Sotheby’s, not to mention eBay. “I went from pins and buttons and posters to signed guitars and their clothing. I also have pieces of their hair,” Entel said.

At first when friends suggested he open a museum, he dismissed the idea. “I’d tell them, ‘I’m a doctor. What do I know about a museum?’” But he knew George Ann Bissett, then the director of the Dunedin Fine Art Center and now its president and CEO, and her husband Colin, a native of Liverpool who “really had a sense of the Beatles’ early days,” Entel said.

Colin Bissett is now the curator of Penny Lane and a museum guide.

“I went to school with Rory Best, Pete Best’s brother and we used to go see them,” Bissett said. Pete Best was the Beatles’ drummer for two years before being replaced by Ringo Starr on Aug. 19, 1962.

Bissett added: “They were nothing like they turned out to be. They were just local guys.”

With just 600 square feet for its exhibition space, the museum holds about 1,000 items, only about a quarter of Entel’s collection, and receives about a thousand visitors per month.

“I have stuff at home that I can’t display here because it’s a small place. I have Ringo Starr’s drum set that he played on a Super Bowl commercial. I have Beatles pinball machines, Beatles juke boxes, a couple of Beatles slot machines from Las Vegas.” Not to mention Beatles puppets and marionettes, gold and platinum records, posters, lunchboxes, toys, a serape worn by Ringo, and John Lennon’s electric razor and the TWA bag he put it in when he traveled.

Now Entel is looking for a larger space, “maybe a place where we could show films. Maybe a kitchen, a space for a band.” He said he’s been contacted by potential sites in St. Petersburg, Florida and Washington, D.C. “But I want to stay in Dunedin. It’s where I grew up and downtown is charming.”

And Entel likes the way the museum inspires visitors to share their own recollections of The Beatles and their music’s impact on their lives.

“There are times I’ll see something I’ve looked at a hundred times and I’ll think, ‘Wow, I didn’t even notice I had that.’ It’s a visual overload but I kind of want it to be that way,” Entel said. “What I love the most is the people who come in and tell their stories, their memories.”

A version of this story was originally published in the Jewish Press of Pinellas County.