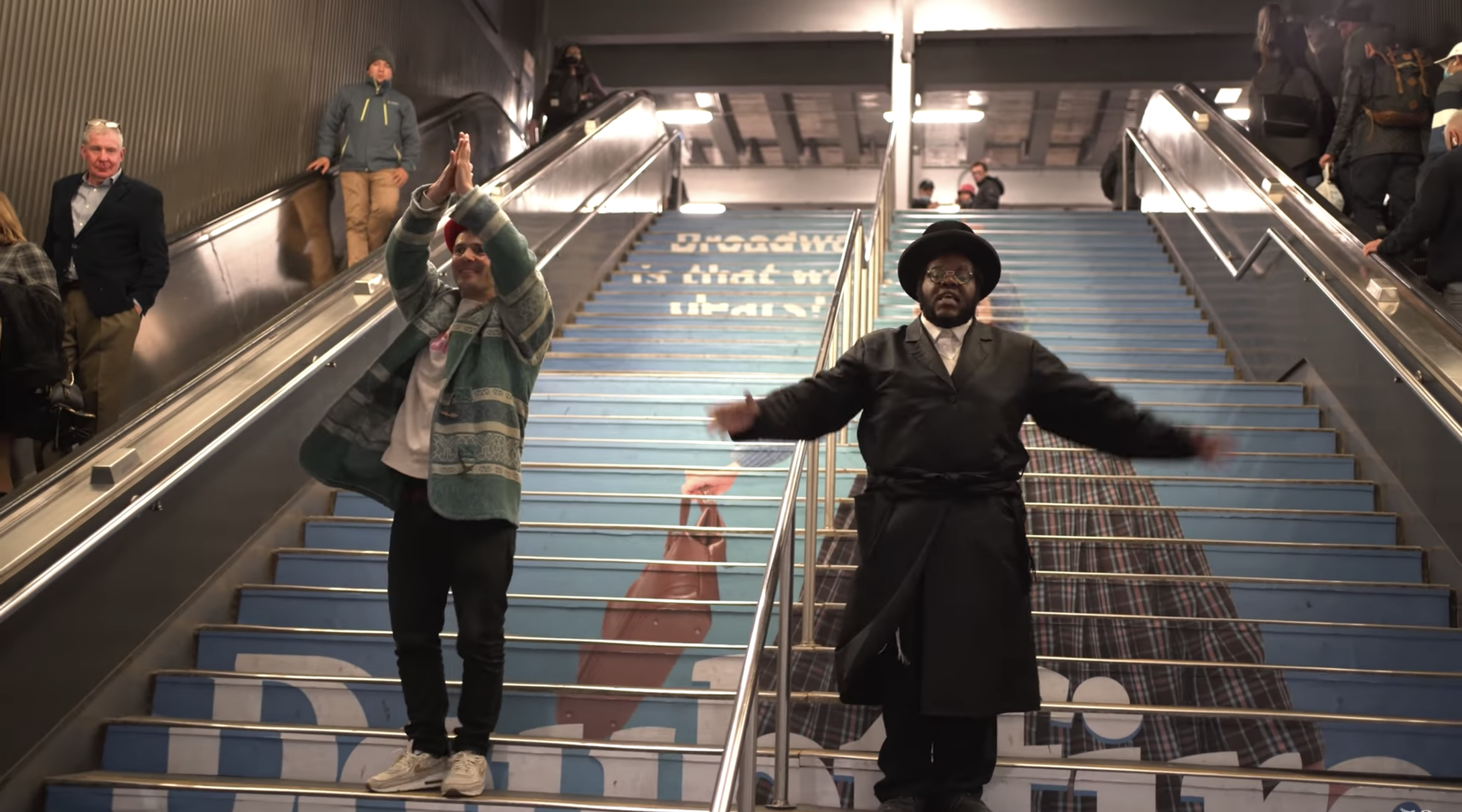 Kosha Dillz, left, and Nissim Black perform across Midtown Manhattan in the video to "The Hanukkah Song 2.0." (Screenshot)
Advertisement

Nissim Black and Kosha Dillz dropped the video for “The Hanukkah Song 2.0” just before the holiday began on Sunday evening. It features the musicians galavanting around New York City, riding the subway and hobnobbing with sidewalk vendors in Times Square.

The pair are two of the best known Jewish rappers making music today. Black is a Black American and Hasidic Jew who moved to Israel in 2016, while Dillz is the stage name of Israeli-American rapper Rami Even-Esh.

Together, they borrow Sandler’s earworm Hanukkah melody and knack for inventing words to rhyme with the holiday’s name. “Aw man, yes, Hanukkah,” they sing in the chorus. “The flow is so iconikah.”

But where Sandler’s lyrics ran down a laundry list of notable Jews, from David Lee Roth to Tom Cruise’s agent, “The Hanukkah Song 2.0” tackles weightier topics, including the miracles at the heart of the holiday and the role of God in protecting the Jewish people over time.

“You know we’ve been down, but we’ve come around, they put our heads down and God took us out,” sings Black at one point. “For eight nights we make a great light and we show the world we’ve won.”

The video begins with Black arriving at the airport, presumably from Israel, where he lives in a haredi neighborhood that he has described as uncommonly diverse and accepting. The strains of Sandler’s original hit are audible in the background.

The haredi Orthodox musician then raps about the miracle of Hanukkah and the power of God. But he declines to name either the many people who have tried to destroy the Jews or which day of the holiday it is. (“I’m not saying it eight times — you’ll have to replay this,” he sings.)

Throughout Black’s solo performance, Dillz can be seen surrounding himself with a variety of menorahs. The pair meet up on the subway, where Dillz begins a solo of his own. In the song’s final section, the pair dance on the steps of Penn Station as masked passersby gawk and stare up at a (simulated) poster in Times Square advertising their upcoming performance.

It’s a billboard for the pair’s shared “Bright Lights” tour that is set to begin next week in New York City and to criss-cross the United States through December and January.

“The Hanukkah Song 2.0” pays homage to its inspiration in more ways than its title and melody. Black and Dillz mention Sandler—who has in the decades since releasing “The Chanukah Song” gone on to a critically acclaimed, genre-spanning movie career — in the lyrics. (Sandler is Gen Z’s favorite actor, according to one recent survey.)

“If you see Adam Sandler on the street,” Black raps, “tell him put me in the scene in the movie!”