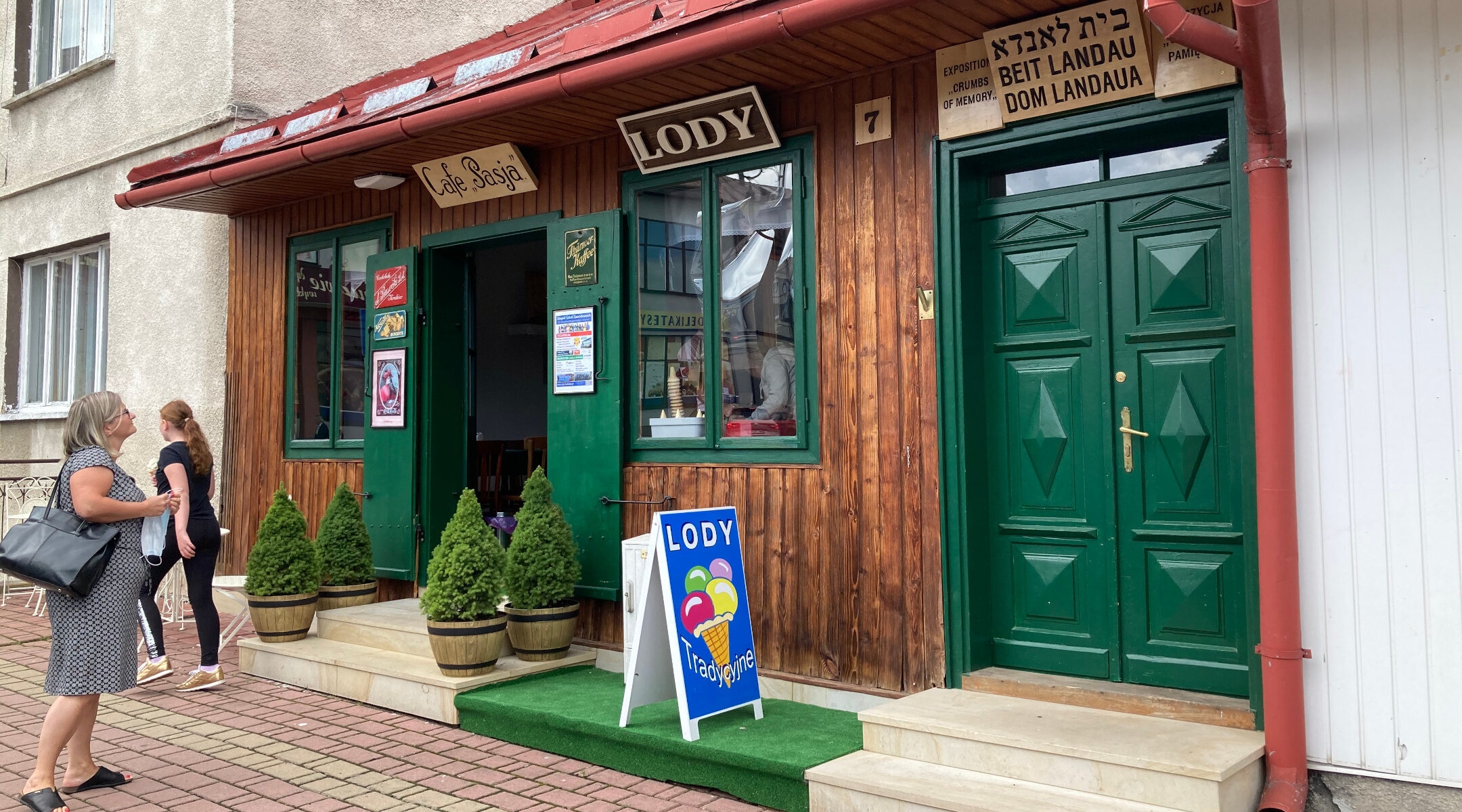 (JTA) — In a small town in Poland, a local ice cream maker is serving up an unusual side dish: a gallery of items once owned by local Jews, including the family that lived in the building before the Holocaust.

Jozef Gucwa opened a makeshift museum adjacent to his ice cream parlor in Bobowa, a town near Krakow, in 2019. Poland’s main Jewish museum, Polin in Warsaw, has shortlisted him for an award for preserving Jewish heritage, but an advocate for preserving Jewish sites says he should instead be penalized for illegally appropriating Jewish property.

On display at “Beit Landau” are silver items including a Hanukkah menorah, a noisemaker for Purim, a Torah scroll, finials that adorn the top ends of the rollers of a Torah scroll, kiddush cups, and elaborate fish-shaped statue, a knife opener with a Star of David adorning the handle and a jewelry box.

Several dreidels are also displayed, according to photos shared by Meir Bulka, who leads J-Nerations, a group aimed at safeguarding Jewish sites in Poland.

The name of the museum, to which Gucwa is charging about $2 to enter, means Landau House, and it refers to the name of the family that lived in the wooden structure prior to the Holocaust. The Landaus are a leading family in the Bobover Hasidic sect, which was named after and based in Bobowa until the Holocaust, then recreated in Brooklyn.

From his home in the West Bank settlement of Sha’arei Tikvah, Bulka has emerged as a leading advocate for preserving Jewish heritage in Poland, after he saw cemeteries in disarray during a trip to see his ancestral home there. Bulka says items on display at “Beit Landau” were illegally appropriated in violation of Poland’s monuments laws, which generally places historically significant finds in the possession of the state.

The items on display were found during renovations to the building aimed at expanding the ice cream parlor, Bulka said, and Gucwa has declared his shop a museum in order to avoid having to give up the valuable property. Bulka said he has filed an official complaint with the Polish police.

Descendants of the Landau family in New York are trying to regain the artifacts, Bulka said. A Hanukkah menorah on display in the makeshift Jewish museum of Jozef Gucwa in Bobowa, Poland in 2020. (J-nerations)

Gucwa did not respond to requests for comment by the Jewish Telegraphic Agency. JTA’s attempts to reach Leibish Landau, one of the family’s descendants, were also not successful. A spokesperson for the Polin museum declined to comment.

The museum is due to make its annual award today, and Gucwa is one of six candidates. His nomination cites the fact that “he purchased a Jewish building with the intention of creating a Jewish-themed museum there” and says he tends the graves of the Landau family in Bobowa’s Jewish cemetery. He first displayed the objects he had collected in 2013, prior to the reenactment (by non-Jews) of a historic local Jewish wedding, according to the museum.

“This history lover searched for, meticulously renovated, collected and finally made available to the public all the recovered objects, thus recreating the pre-war character of the inn run years ago by Leon Landau’s family,” the museum’s website says . “Józef Gucwa is constantly expanding his collection of Judaica and objects left behind by the Jews of Bobowa that may reflect their culture and at the same time offer us a peek into their everyday lives.”

Honoring Gucwa could be emboldening others who find property left behind by Jews who were driven out or murdered, Bulka wrote on Facebook.

“It is very likely that the recognition of his candidacy is legitimizing property offenses by others who found items belonging to Jews or their properties,” he said.