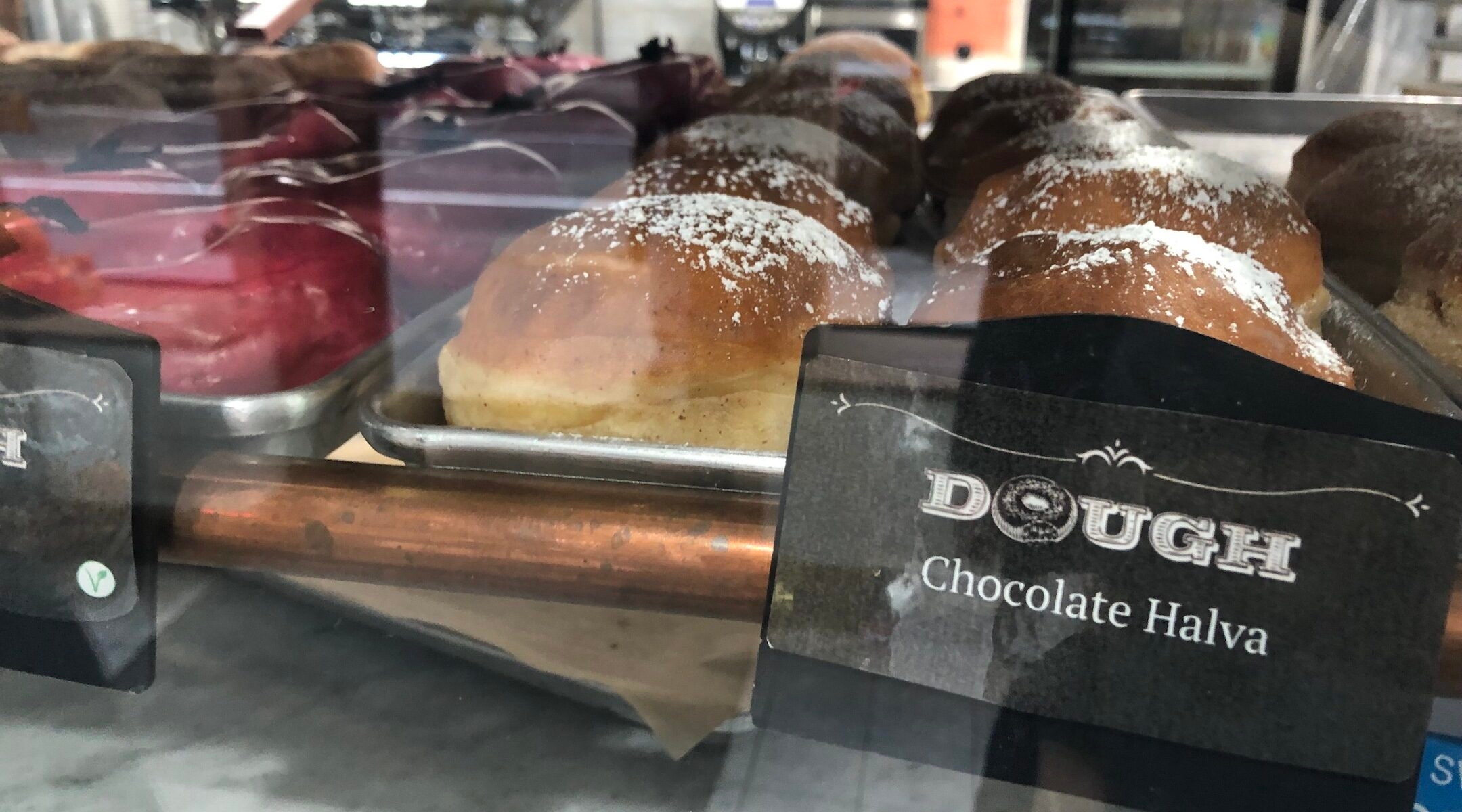 (New York Jewish Week via JTA) — It was just a few months ago when the proprietors of Dough Doughnuts decided they wanted to give local Jews a Hanukkah present: kosher certification for all of the fluffy artisanal doughnuts fried by the mini-chain.

Open since 2010, Dough shuttered all but one storefront during the height of the pandemic, operating only out of its West 19th Street location where visitors can get a front-row seat to the doughnut production line.

As the city started to come back to life this summer and the chain began making plans for its retail locations  — which now number seven — Dough’s operators realized the time was right to do something that they had been discussing for more than a decade.

“We’ve always been kosher,” said Stephen Klein, one of the chain’s owners, referring to the fact no unkosher ingredients had ever been on the menu. (“The maple bacon donut, I was never interested in that,” he said.)

“But everybody kept on saying you should open this up to, how can we say it, the kosher-certified community,” Klein said. “And once we started opening in Brooklyn, Queens, Rockefeller Center, right around the corner from 47th Street [the Diamond District, where many Orthodox Jews work], it hit us: Let’s give it a shot.”

Because Dough uses just a small number of ingredients, none with meat or its byproducts, the process was straightforward and not too expensive, Klein said. He said rabbis from the International Kosher Council visited the production facility over the course of several weeks before offering the IKC certification, or hechsher. The chain’s Hanukkah doughnut lineup — including chocolate halva, apricot jam and Nutella sufganiyot — would all be acceptable to diners who accept the IKC hechsher.

The chain isn’t the only New York City doughnut shop with a special Hanukkah menu. Even Krispy Kreme is advertising a blue-and-white Hanukkah dozen on placards outside its city shops. Meanwhile, Fany Gerson, Dough’s Mexican Jewish founder who left the company early last year, collaborated with Jewish food personality Jake Cohen on a cranberry-sumac-salt-and-pepper sufganiyah available only this weekend at her popular Fan-Fan Doughnuts in Brooklyn. But those shops don’t carry kosher certification.

Of course, New York’s kosher-keeping Jews have plenty of options at bakeries catering to them. Kosher supermarkets and bakeries ramp up doughnut production for the holiday, and the crowds can be substantial at stores slinging sufganiyot in Orthodox neighborhoods. Some of them are going beyond just jelly-filled: Sesame in Brooklyn, for example, announced a lineup of 18 flavors for this year, including mint white chocolate and lemon meringue.

Nor is Dough the only doughnut shop to seek kosher certification. On Dough’s Instagram announcement, a popular Boston chain, Blackbird Doughnuts, wrote, “Awesome. We’re looking into that too. ✡️.” And a husband-and-wife certification team — led by Yuri Foreman, an Israeli boxing champion turned rabbi — just announced that they are supervising the kosher status of Dun-Well Doughnuts, a vegan-only shop in East Williamsburg, Brooklyn, a neighborhood that is home to both hipsters and Hasidic Jews.

To keep ahead of the competition, Dough recruited kosher-keeping Jews with large social media followings to promote the doughnuts. Influencers from across New York City — as well as the Five Towns on Long Island and Lakewood, New Jersey, both areas with large populations of Orthodox Jews — have flocked to the city to post pictures extolling Dough’s brioche doughnuts. “It’s [a] Chanukah miracle!!” wrote Noam Osadon, who goes by the handle jewber_eats, following Dough’s kosher announcement.

Rebecca Appel, who posts online as Brooklyn Food Snob, posted about the doughnuts and their hechsher on the Great Kosher Restaurant Foodies Facebook group, which has 64,000 members. She used shorthand for “local Orthodox rabbi” when indicating that not everyone who keeps kosher will follow the IKC hechsher (the world of kosher certification being famously factious) but that doing so would come with benefits.

“Use your own judgment or ask your LOR but if you eat this hechsher, y’all need Dough in your life!” she wrote. “Their donuts are 10000% the best I’ve had in NYC.”

Klein said the strategy of recruiting influencers has worked for the brand before — it recently collaborated with the mixed martial arts fighter Conor McGregor, and has worked before with Chrissy Teigen  — but never so immediately. “We brought in the big Instagrammers, and they brought in instantaneously the Jewish community,” Klein said. “I’m shocked — the results have been so fast.”

As the child of Holocaust survivors who was born in a displaced-persons camp in Europe, Klein said he was personally pleased to be able to serve more Jewish customers. He suggested that the brand might even consider pop-up locations in Orthodox areas outside of the city during Hanukkah next year.

But he also said he’s confident that it’s Dough’s doughnuts, and not the kosher status of its kitchens, that is bringing in the crowds. “Because you’re kosher it doesn’t mean you’re going to get the business,” Klein said. “I don’t see anybody in New York doing what we’re doing for Hanukkah, and it’s working.”