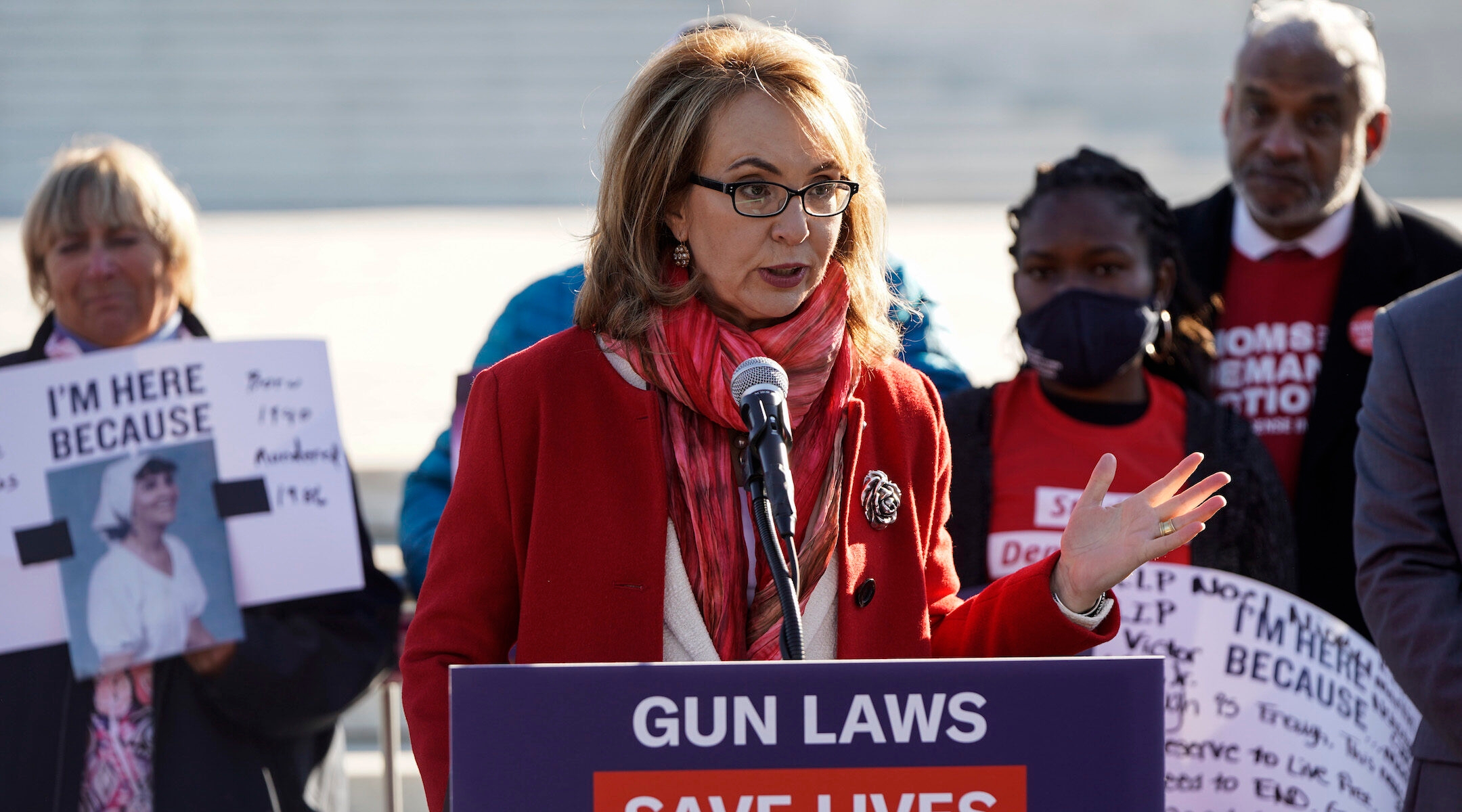 Gabrielle Giffords speaks during a demonstration with victims of gun violence in front of the Supreme Court, Nov. 3, 2021. (Joshua Roberts/Getty Images)
Advertisement

(JTA) — After former House Rep. Gabrielle Giffords was shot in the head outside a supermarket in Tucson in 2011, it wasn’t clear if she’d survive, let alone be able to speak. Giffords’ injuries, which led her to resign from office, left her with partial paralysis and aphasia, which makes it difficult for her to speak.

But last Saturday, Giffords chanted her Torah portions, becoming a bat mitzvah at Temple Chaverim in Tucson at the age of 51, the Forward reported.

The milestone was the culmination of 20 years of study with Rabbi Stephanie Aaron, as well as two close friends. Aaron delivered a speech that Giffords wrote and Giffords performed the song “Amazing Grace” on the French horn.

“My Torah portion is from Genesis, from the story of Joseph,” Giffords told the Forward in an email. “If you know Vayeshev you know it begins ‘And he lived.’ Any story that begins ‘and he lived’ is good with me. I lived. Everything afterwards is a gift.”

Giffords and Aaron first began studying together when Giffords was a member of the Arizona legislature in the early 2000s. While the two discussed Giffords becoming a bat mitzvah multiple times, it wasn’t until two years ago when Giffords recruited two friends to study with her that they began preparing for the moment in earnest. The four women studied the weekly Torah portion together before beginning to study Gifford’s portion, which Giffords chanted along with Aaron.

“I am a person who is always looking for ways to grow, to keep moving and find new paths,” Giffords wrote to the Forward. “I am proud and honored to become a bat mitzvah as an adult. It is never too late to explore faith, to learn the stories of the past and reflect on their meaning today.”

Giffords’ grandfather changed his surname from Hornstein in the 1940s to avoid antisemitism. She was raised by a Jewish father and Christian Scientist mother in Tuscon but has practiced only Judaism since the early 2000s.

Giffords represented Arizona’s 8th District in Congress from 2007 to 2012.